For a foreign visitor, to attend a Hamer bull jumping ceremony is largely a matter of good luck since they are usually known at short notice. I was lucky enough to attend such traditional leaping ceremony.

The initiation rite symbolises the shift from to adulthood for Hamer male teenagers. The ritual of passage allows young males eventually to marry and to own cattle herds.

Prior to the ceremony, the teenager is nicknamed ukuli (donkey) by his community to suggest his total obedience to his family and to the elders because of his young age. Our ukuli is named Hira, 15 years of age.

The ceremony gathers not only the extended family of the teenager but also his entire village and many more folks from the region. It lasts usually two days. 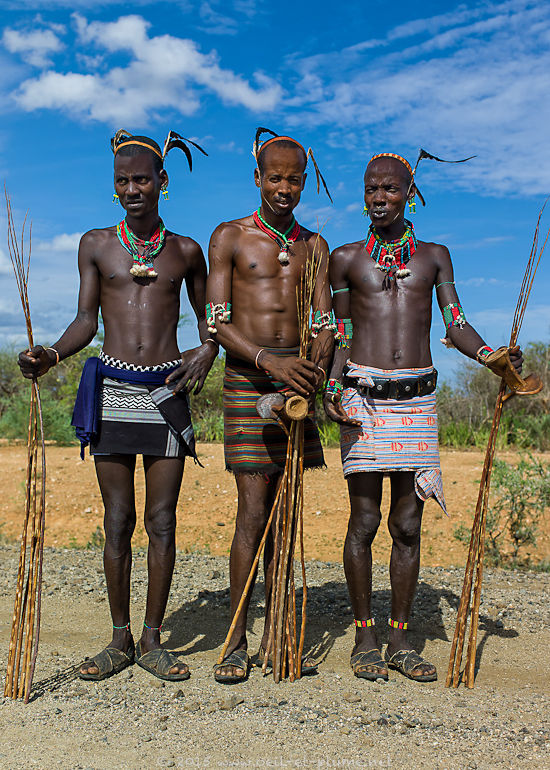 On our way to the Hamer village, we cross three mazas (whippers) who are to attend the initiation ceremony as well. They are invited in all similar rituals of passage in the region to perform an odd tradition: lashing local females with a thin and flexible stick.

Upon arrival, the Hamer village seems asleep. Only minutes later, a group of young females runs out of huts down to the farming area to catch up the first maza holding a set of wooden canes. Believe it or not, the young women quarrel and fight amongst themselves to get as many sticks as possible from the whippers. 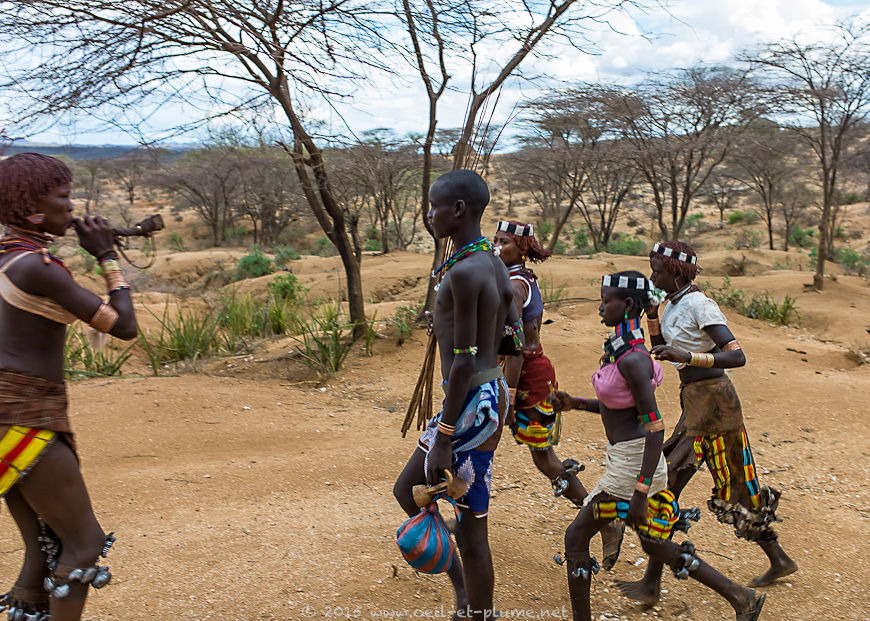 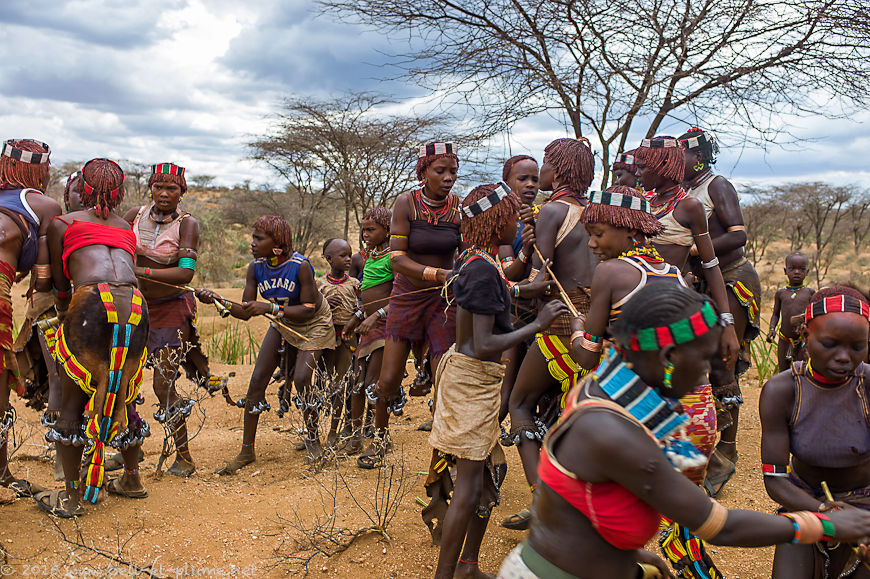 Then female attendees run a long phase of chanting and dancing, using their metal horns and bells to sustain their collective. Their excitement grows gradually to shift into a tension approaching a collective trance. 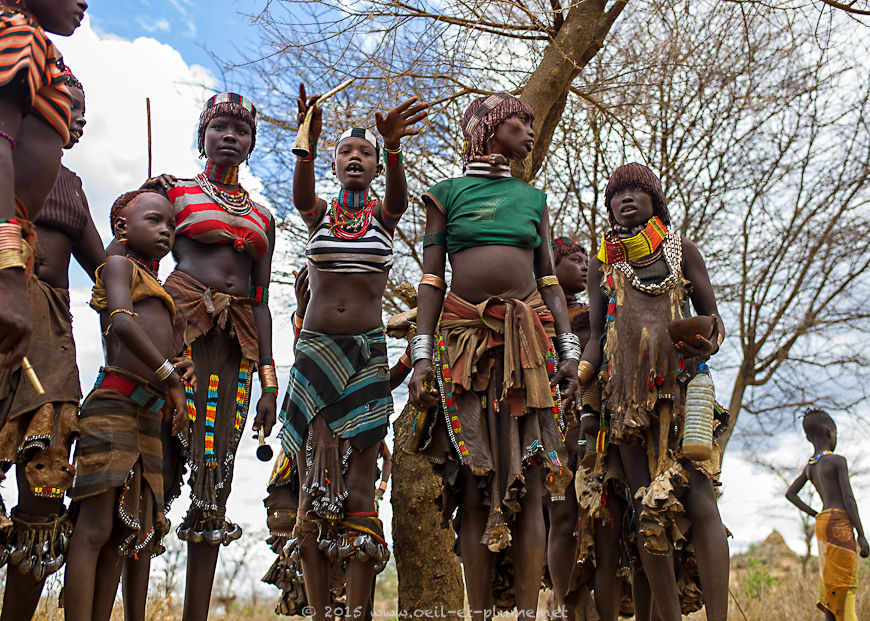 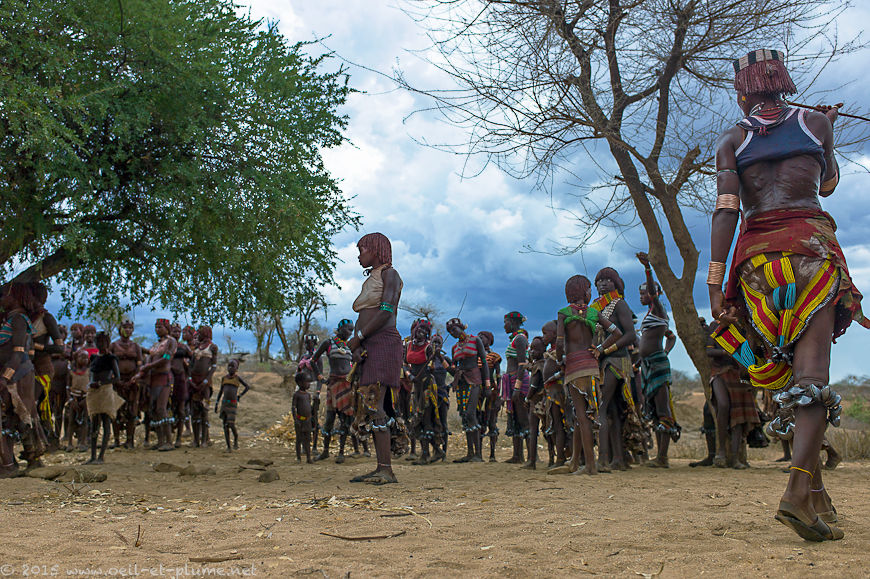 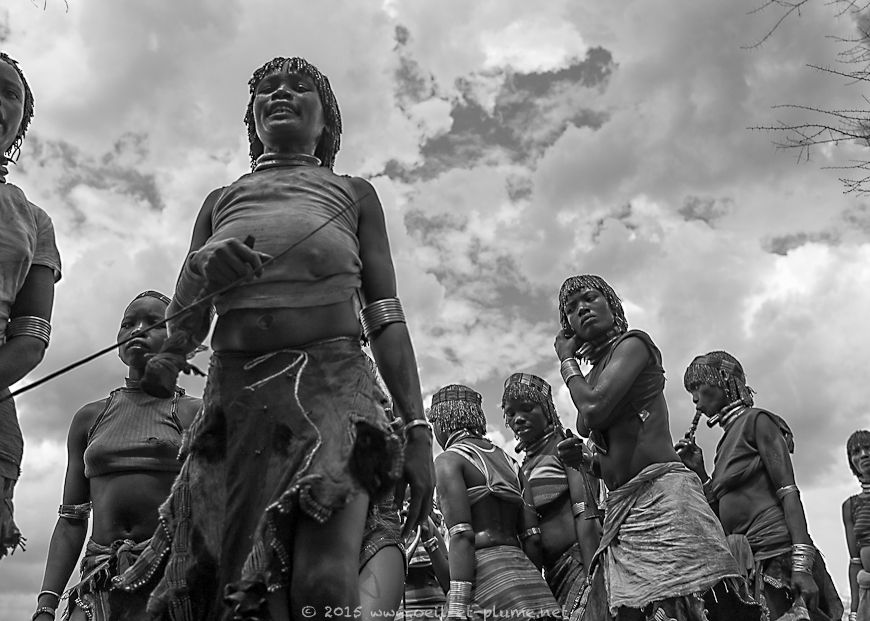 Meanwhile, our ukuli Hira appears with a few friends, relatives and whippers. The teenager is tall and athletic, looking calm and self-confident. The males start painting their body with natural colours. 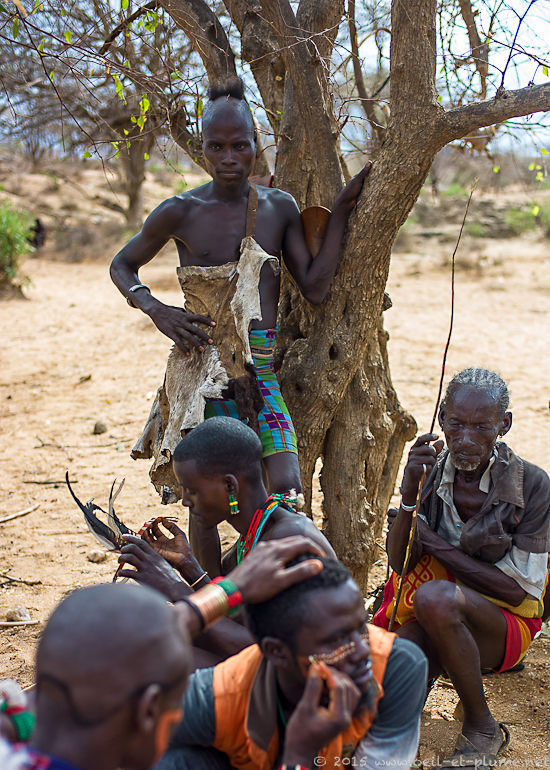 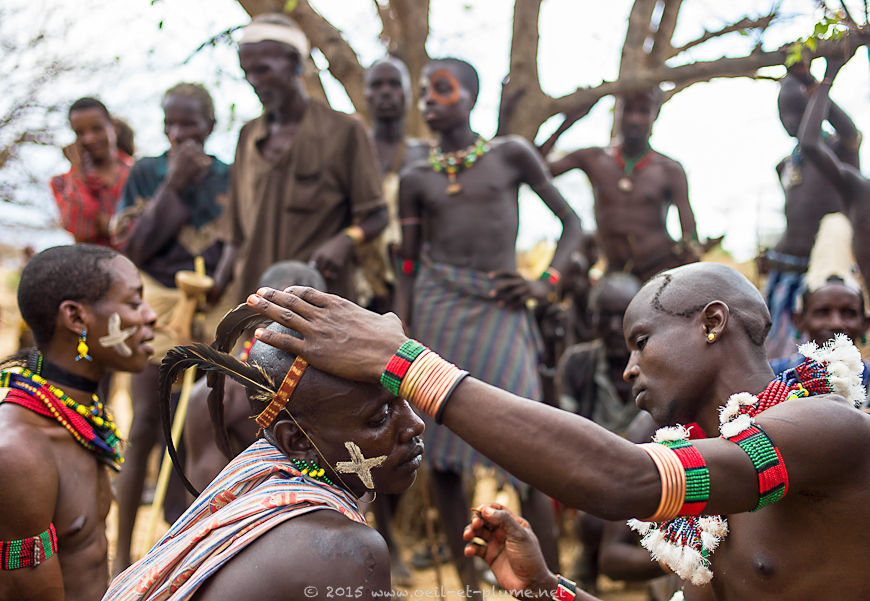 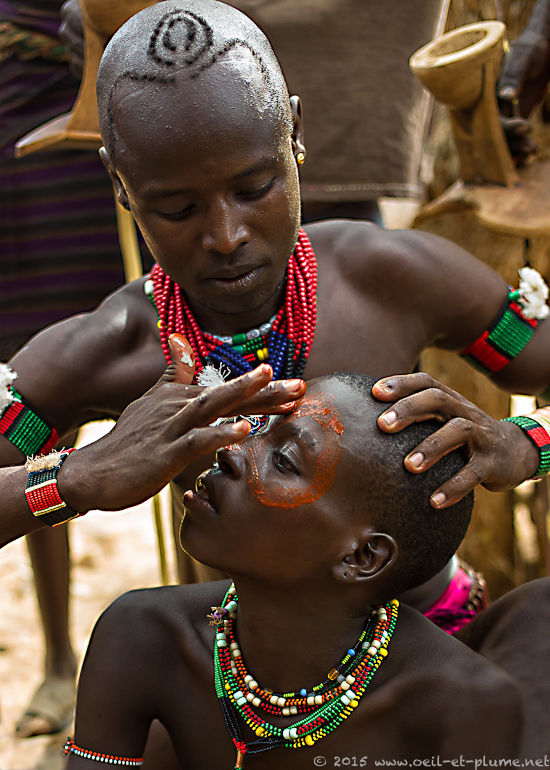 Once done, the men approach the female dancers who stop finally their nagging performance.

The air is thick and heavy when the weeping session starts. Females present to the mazas the sticks that they have gathered. The strikes sound and resound as they lacerate the bare backs of the women. The wooden sticks break up quickly, replaced by fresh ones. 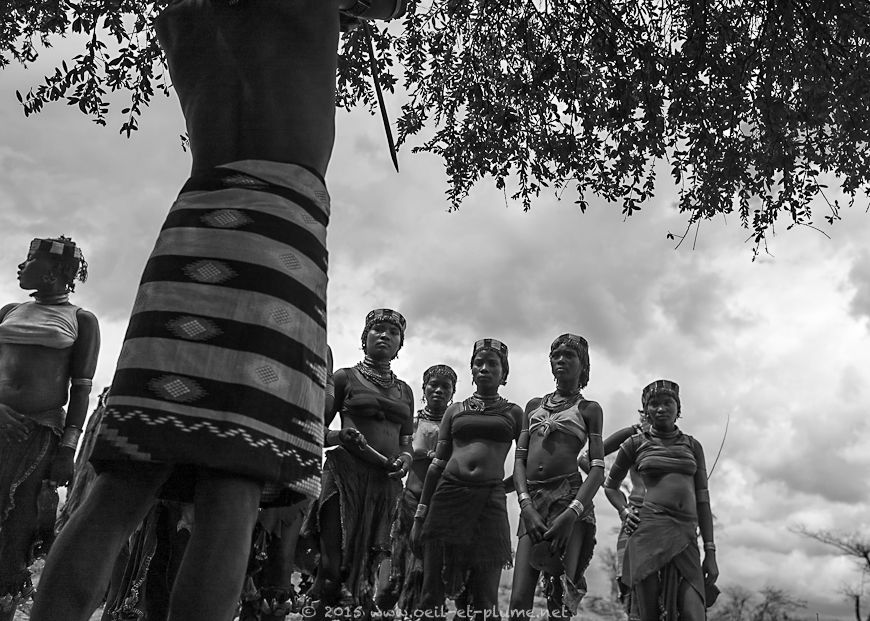 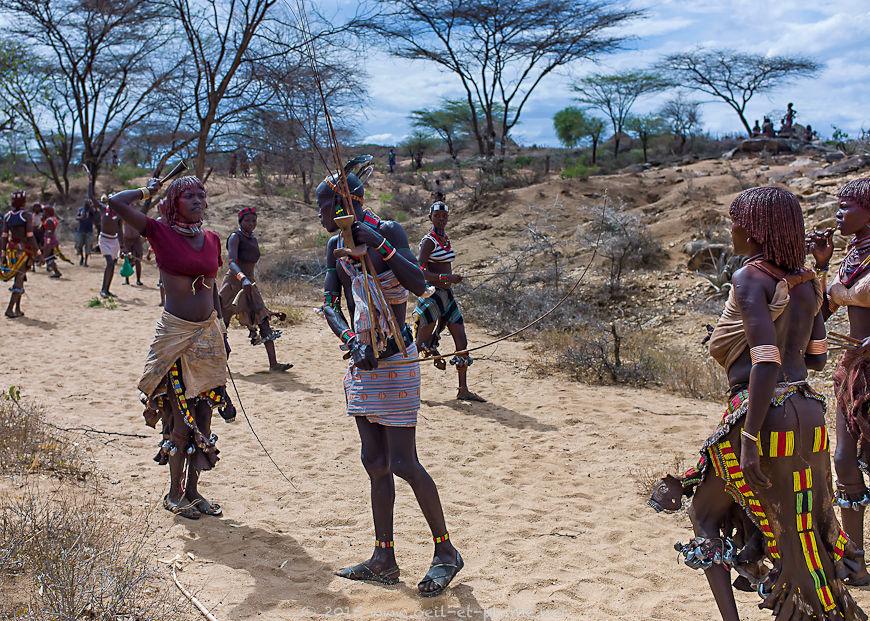 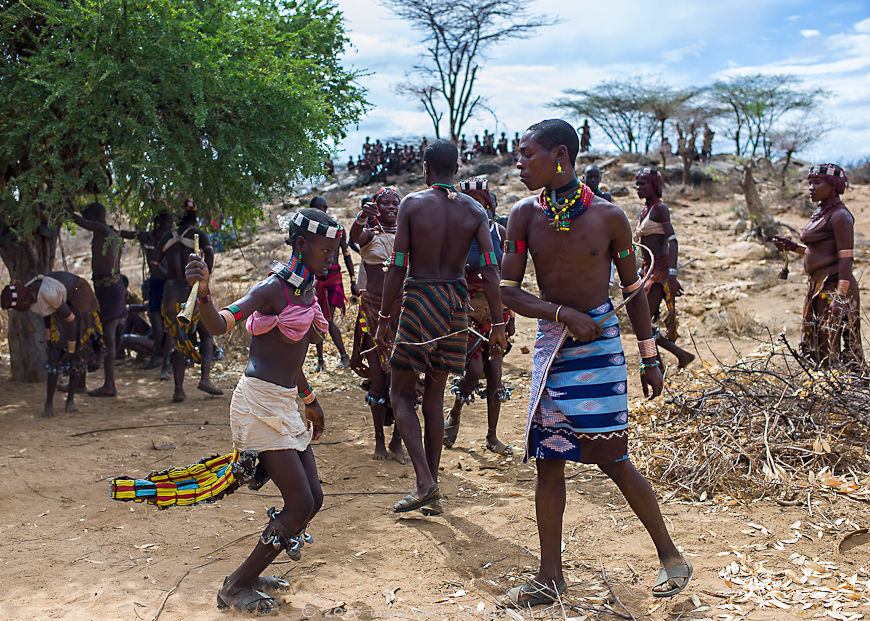 The women sustain the whipping session with no apparent pain. They blow their horn immediately after each lash to demonstrate how strong they are and continue looking for more lashes.

The females are Hira’s relatives and neighbours. According to Hamer tradition, the open wounds and scars in their backs testify their love of the teenager. I take soon some distance, feeling uneasy with the scene. The weeping session ends soon, leaving the weepers to rest and chat with the ukuli. 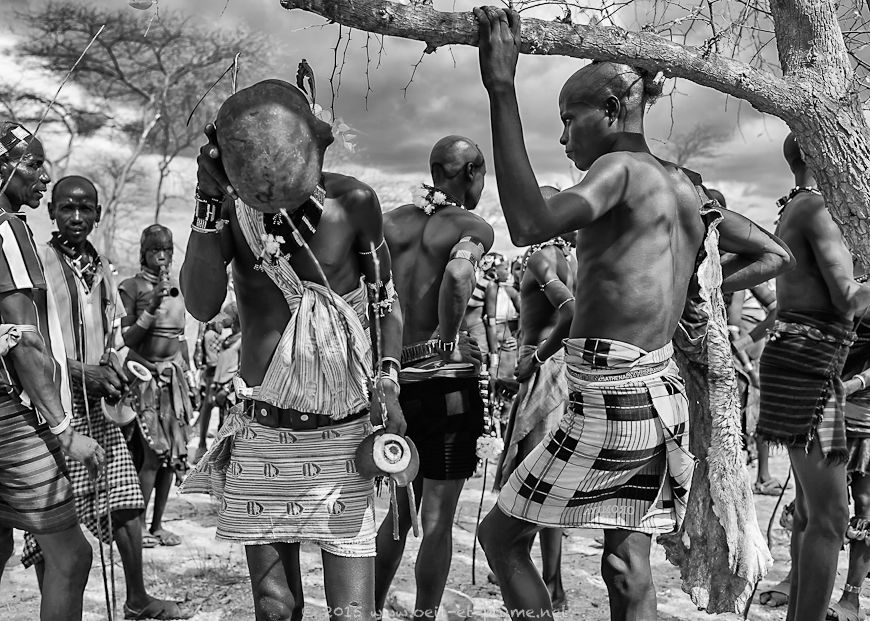 Then the crowd moves up to the village centre to attend the banzi (blessing) ceremony. Warm sorghum beer is served. Reinvigorated, the female dancers perform new dances. 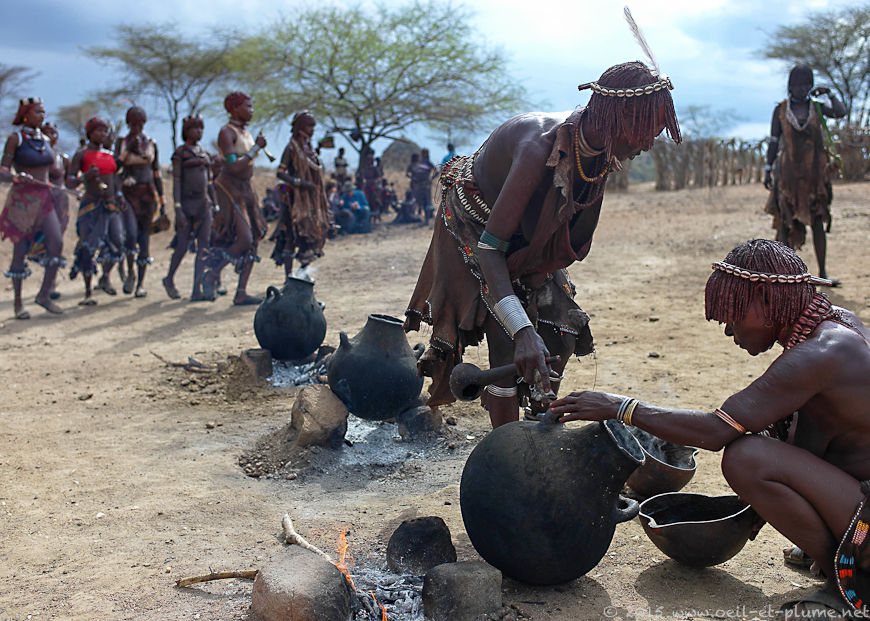 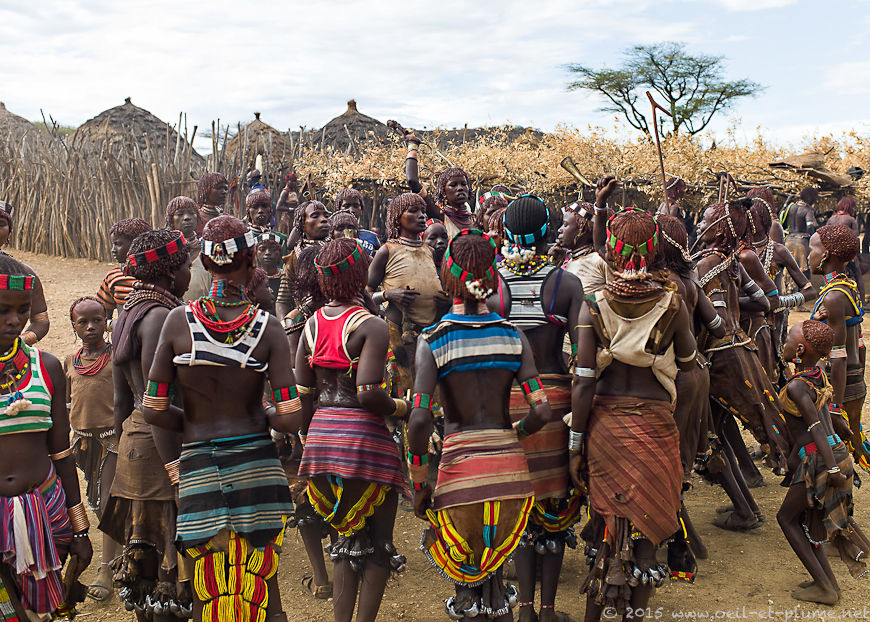 The blessing ceremony is public but intimate. Sitting in the middle of the enclosure, Hira sits in front of the head of whippers, circled by his fellow mazas. 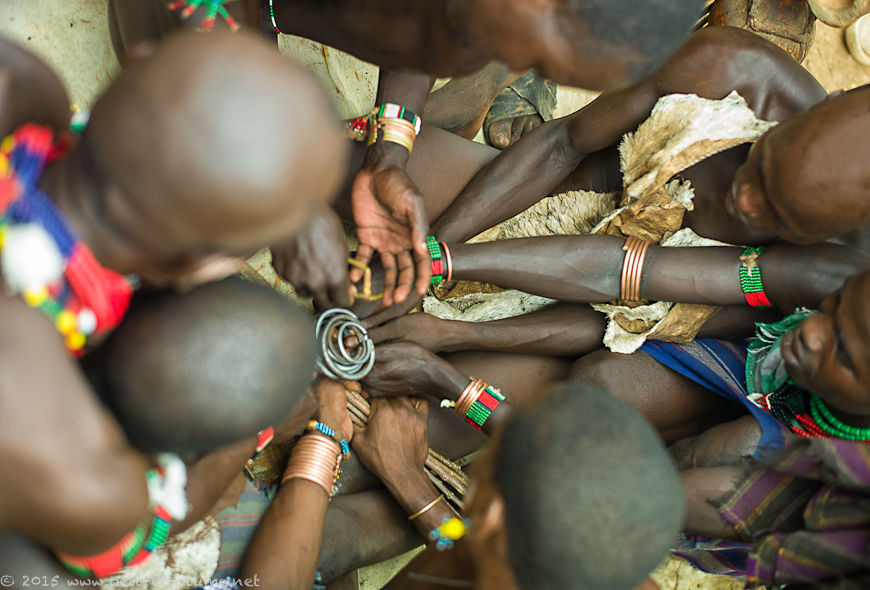 The head of whippers acts as Hira’s stepmother as his own mother is prohibited from attending. Following an oath, Hira is addressed blessings and good luck wishes. Metal bracelets are being blessed and ribbed with cow shit. Hira will wear them after the jumping ceremony. 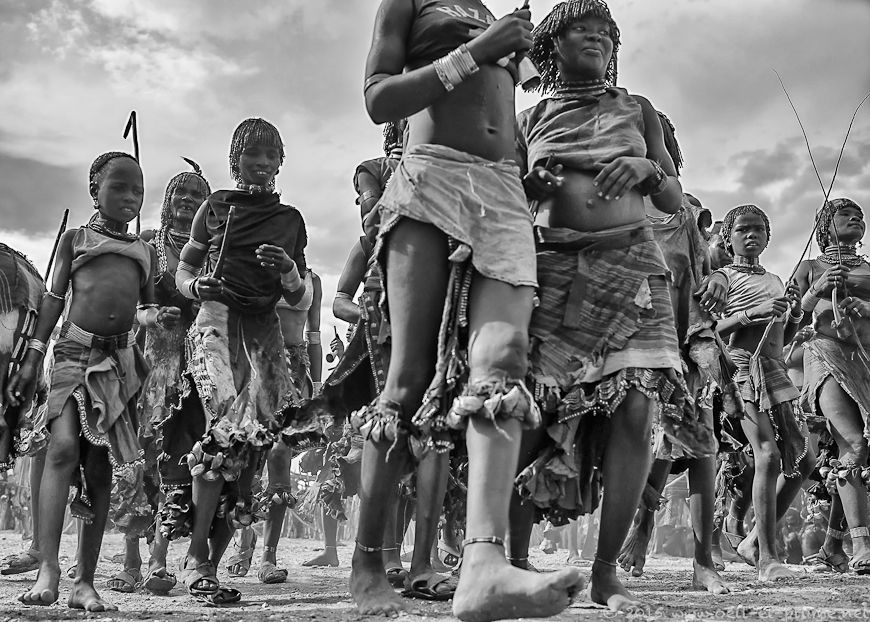 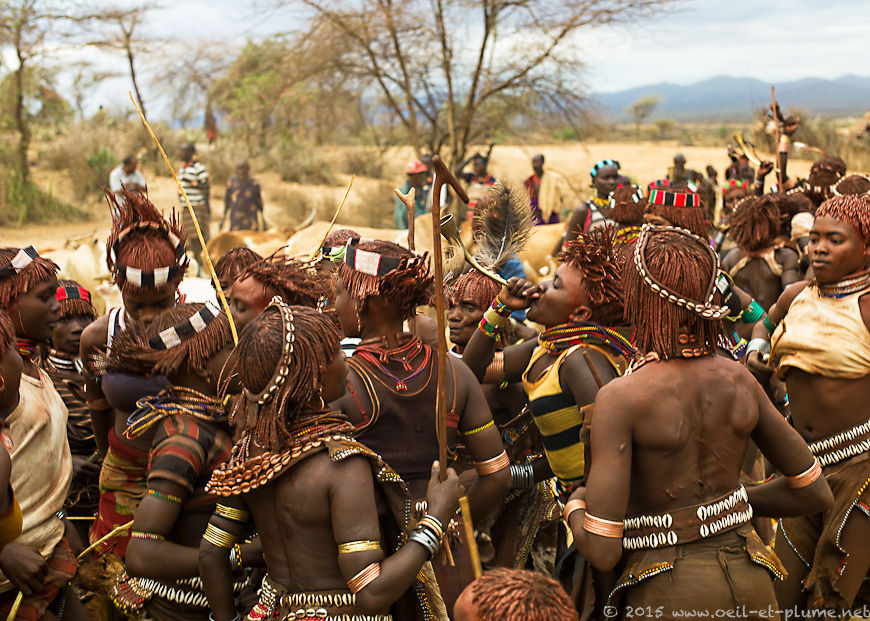 Heated by the nagging chants and ritual dances of female performers, the ambiance in the enclosure turns electric, approaching a collective trance. Time is ripe for the bull jumping ceremony.

The crowd moves again to a flat area next to the hut settlement where a small dozen of bulls are gathered. The cattle are quickly contaminated by the excitement of the audience. It takes much effort to the weepers to align the bulls. Once the cattle in place, the whippers circle them to calm them down. 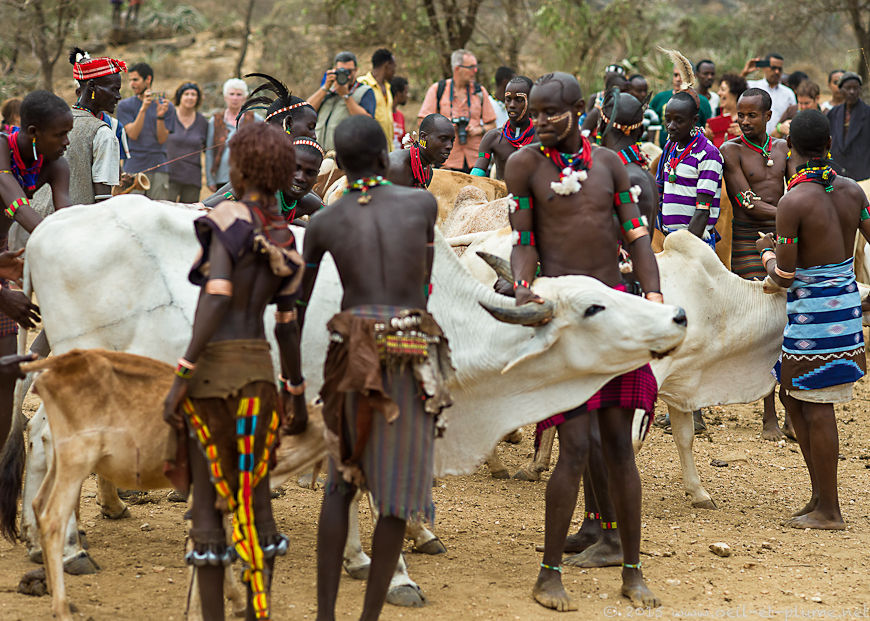 The number of bulls forming the living bridge depends usually on the ukuli’s family wealth; it ranges usually from seven to twelve heads of cattle. They are selected by the whippers and are all castrated. The bulls must be of even height, except for the first and last ones that are smaller to be used as springboards.

Hira appears finally, hiding his nudity behind a whipper. He looks stubbornly at the bulls, leaving aside all other attendees. He is to jump over them in two return passages without falling from their backs.

All of a sudden, Hira starts running and jump onto the cattle bridge. During the jumping, his female relatives held a stick high up horizontally to support him. 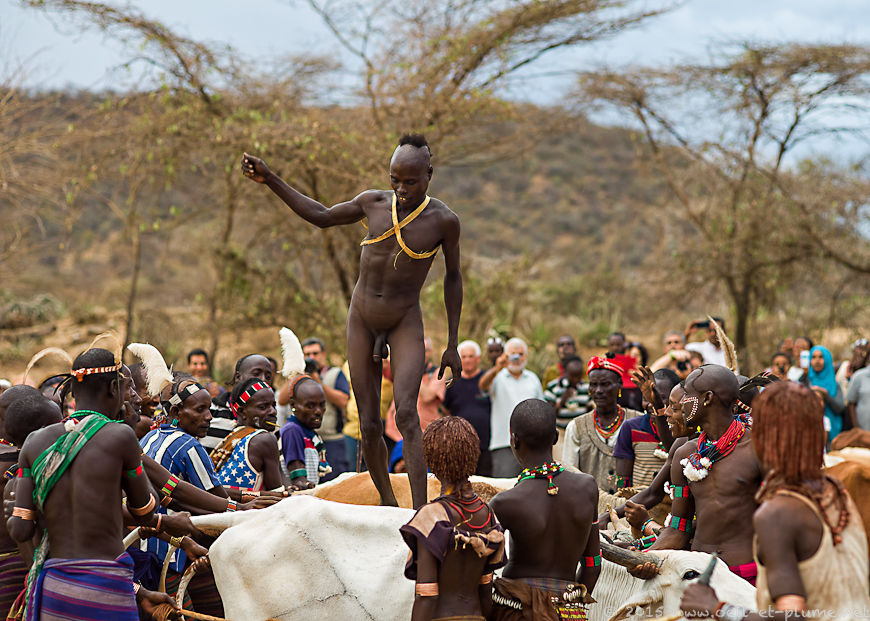 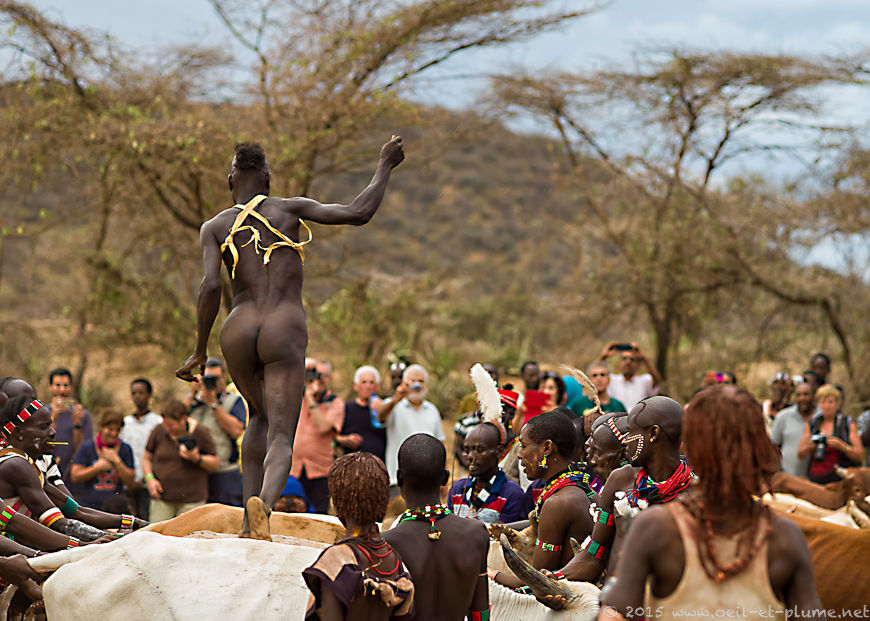 Hira is quick as a cheetah, but falls on his third passage over the bulls. He starts again to conclude the ritual under the acclamation of the audience. 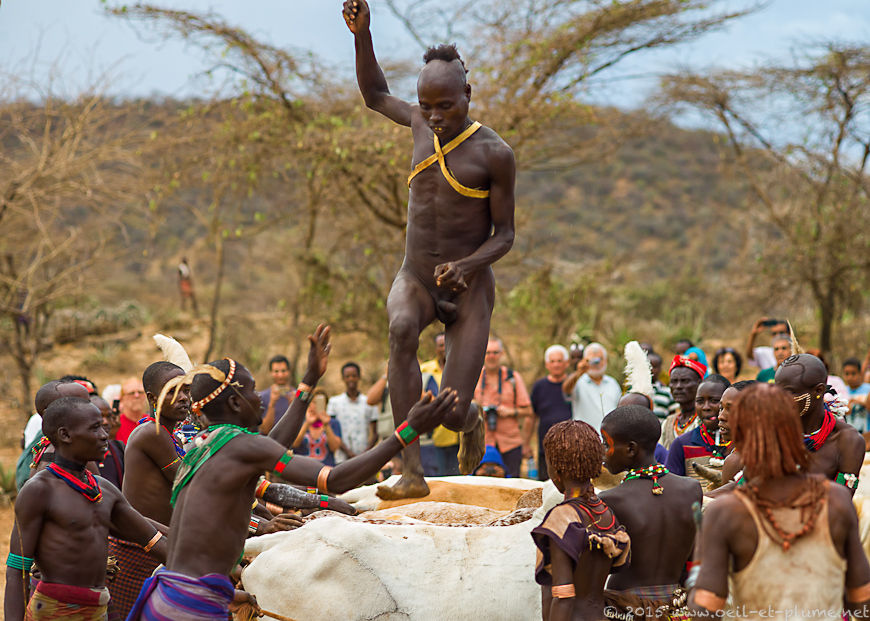 Hamer tradition has it that an ukuli falling from the bull backs is weak and hence not ready for adulthood. The community may blame Hira’s female relatives for not having fed him properly. I hope it won’t happen this way. I prefer listening to the local connoisseurs who argue that Hira fell down because the bulls were not well aligned.

Physically demanding, Hamer’s bull jumping ceremony remains socially integrative. Disabled jumpers are helped so that they can succeed as well.

After the jumping ceremony, relatives and weepers sing a blessing song to the ukuli and end up spitting on him to wish him good luck. The ceremony ends usually at nightfall to continue the following day to celebrate the completion of the ritual of passage.

Following the bull jumping ceremony, Hira becomes a charkale and will – a young paint his body with charcoal. After nine days, he will wash completely his body before joining the mazas (whippers).

Weepers form a close social circle sharing strict rituals and practices. Having all successfully completed their bull jumping ceremony, they wait for their family to identify a suitable spouse for them and agree with her relatives about the dowry to be paid in cattle. Meanwhile, they participate in bull jumping ceremonies in their region.

You may meet Hira as whipper in a bull jumping ceremony if you head to the Hamer tribal land in the coming months. 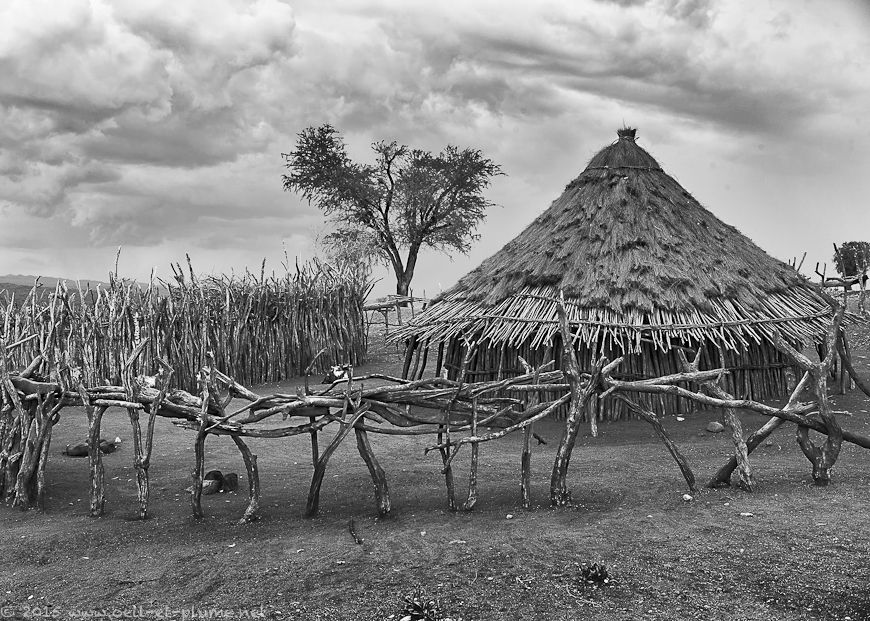 The Hamer way to male adulthood is long and not straightforward, but it is culture-rich and meaningful.