Iran stood long on my priority list of countries to visit. My wish materialised recently. Due to time constraints, I focussed on three spots of what is called ‘classical Iran’ – namely Isfahan, Yazd and Kashan.

Isfahan is half of the world, claims a Persian proverb. A beautiful, green, history- and culture-rich half, I would add.

The town flourished particularly under the Safavid ruler Shah Abbas I (reign 1588-1629) when it became the capital of Persia for the second time in history and one of the largest cities in the world. At that time, Isfahan grew not only in political and demographic significance. It soon became the cultural heart of Eastern Islamic world, as well as a commercial hub on the legendary Silk Road connecting Europe and China.

Upon arrival in Isfahan, I am struck by the numerous trees bordering the main avenues and boulevards, as well as by the large and well-maintained green areas in town. Indeed, any city needs water to flourish, particularly in a water-stressed area like central Iran. However, Isfahan seems blessed in this regard. Hence, I head first to the Zayandeh River and the many bridges crisscrossing its water flow.

The many historical covered bridges over the Zayandeh River are nowadays part of Ispahan’s cultural heritage and modern-day life, as they attract flocks of residents for refreshing evening walks. By daytime, only few people venture there because of the heat, and mostly take refuge under the stone arches of the bridges. I am lucky enough to spot two nice-looking residents braving the sun… 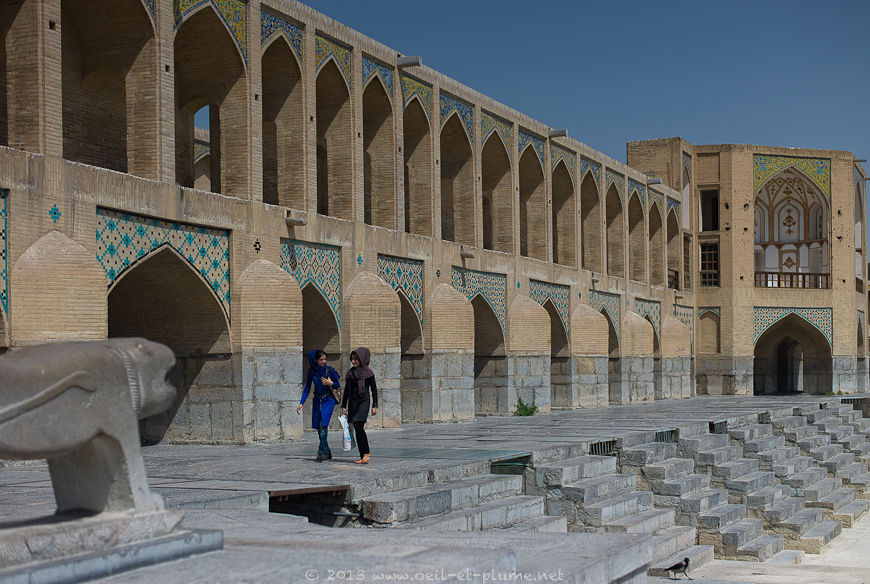 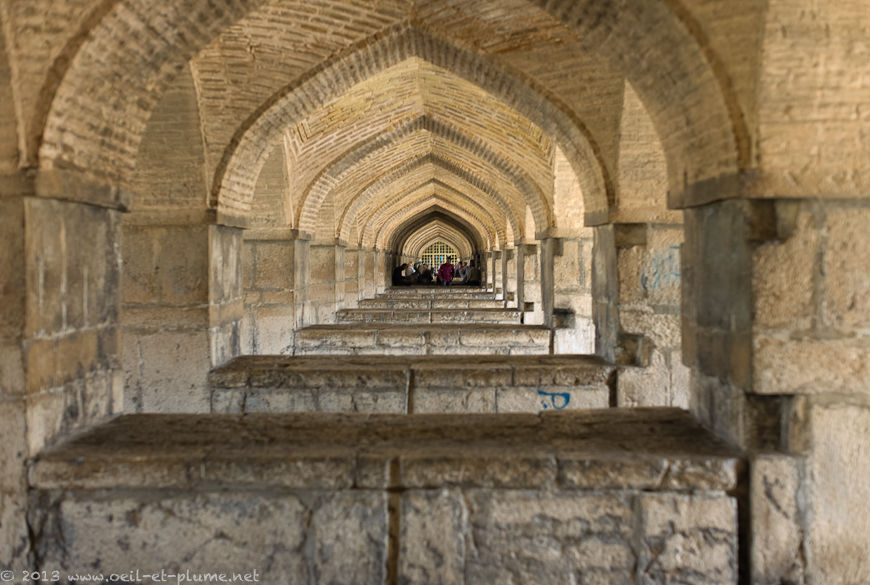 I am less fortunate in meeting the Zayandeh River, whose bed was completely dry. It reminds me of the picturesque Pichola Lake which was also empty during my visit to Udaipur in 2006. Never mind, Isfahan was abundantly supplied with water during my stay, drawing upon other supply sources.

On day two, I feel ready to visit the most prominent buildings of the Safavid dynasty in Isfahan. Even today, the city retains much of its prominent history. To avoid crowds, I take a rear routing leading to the centre of the then Persian capital. 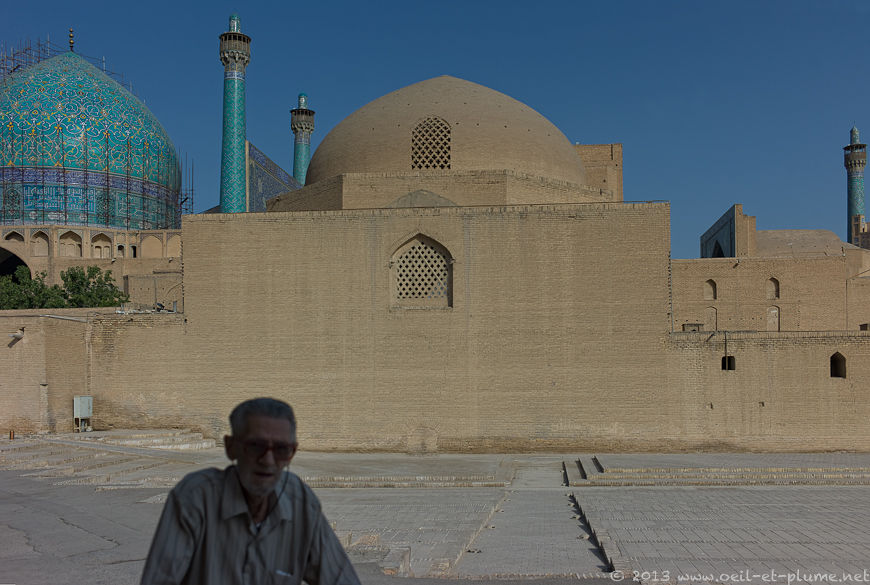 Listed by Unesco as World Heritage Site, the Naqsh-e Jahan Square is one of the largest (500 x 158 m) in the world and an outstanding piece of Iranian Islamic architecture. Called the ‘Design of the World’, each of its four sides displays one facet of the Safavid rule: worship (Shah Mosque), commemoration (Sheikh Lutfallah Mosque), sovereign administration (Imperial Palace), and trade (Qaisariya Bazaar).

Water occupies the centre of the square. Quite a symbol. The fountain and the pool are still functional for the greatest pleasure of contemporary residents of Isfahan. Those preferring the shade enjoy another use of water: tea. Iranians are ready for a tea anytime of the day and of the night. 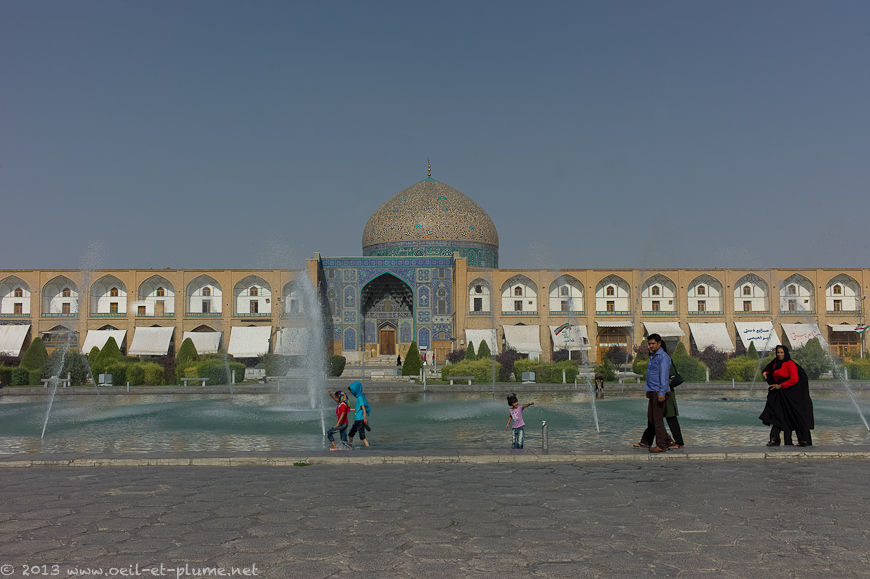 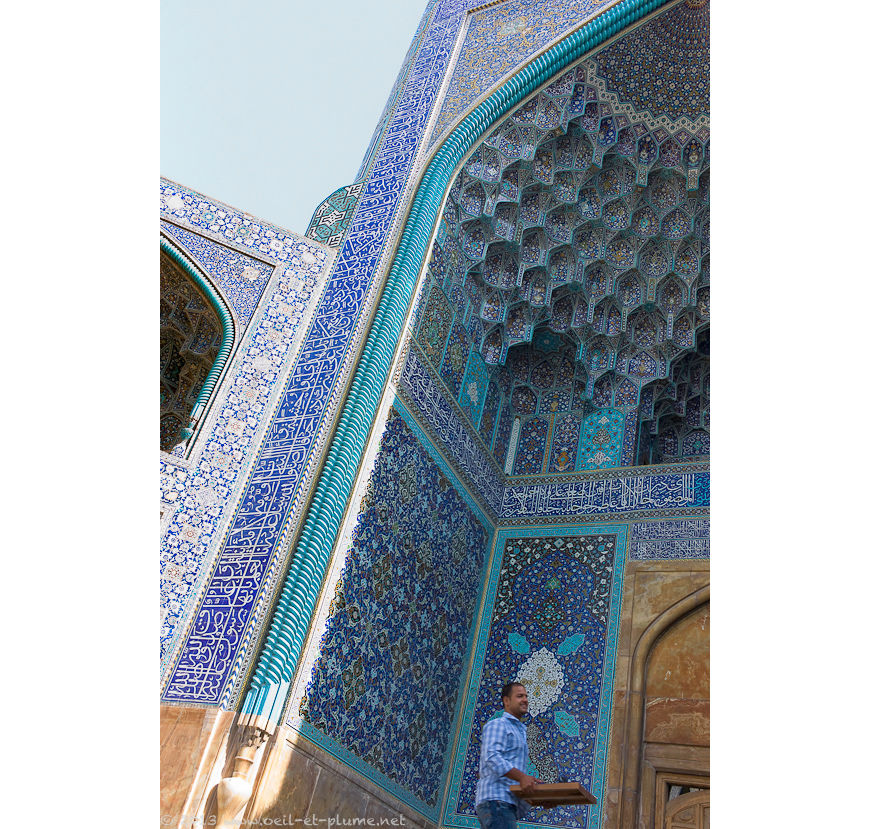 The refined outer architecture of the Shah Mosque is stunning. The interior of the building impresses me as well, but not to the extent I had imagined from outside. More a lack of positive energy reaching the visitor than an aesthetic issue. The Mosque’s inner dome is no less than exquisite. 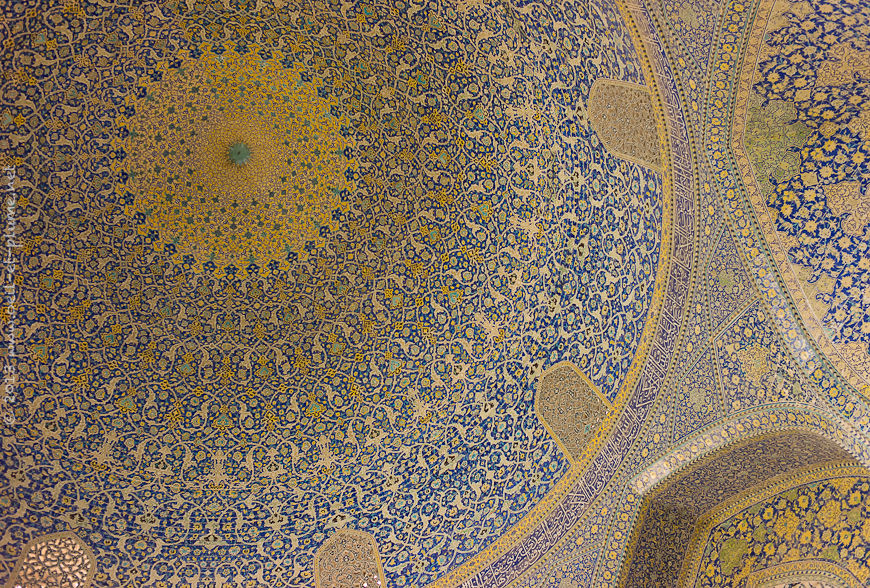 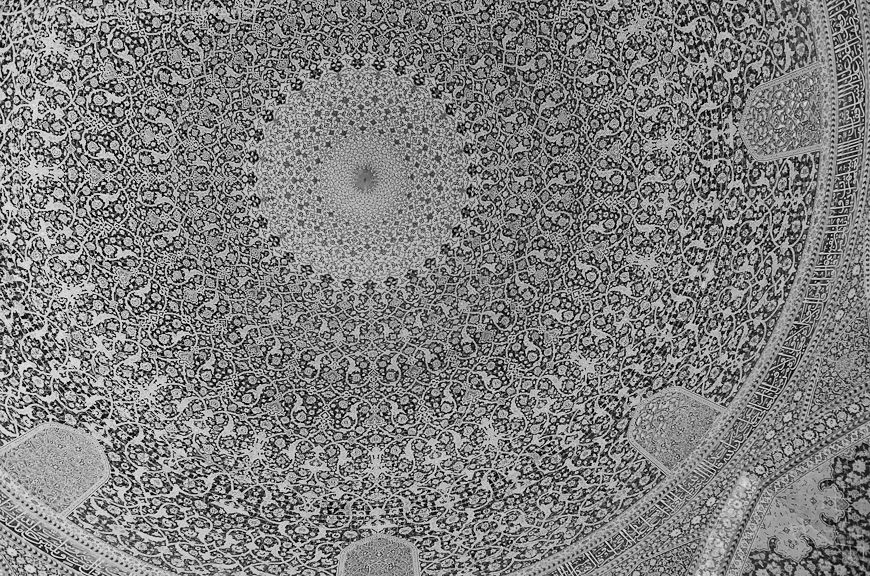 Back to the Square, I notice two high stone poles facing each other on both ends of the place. These were polo poles, as Persians were very fond of polo games. 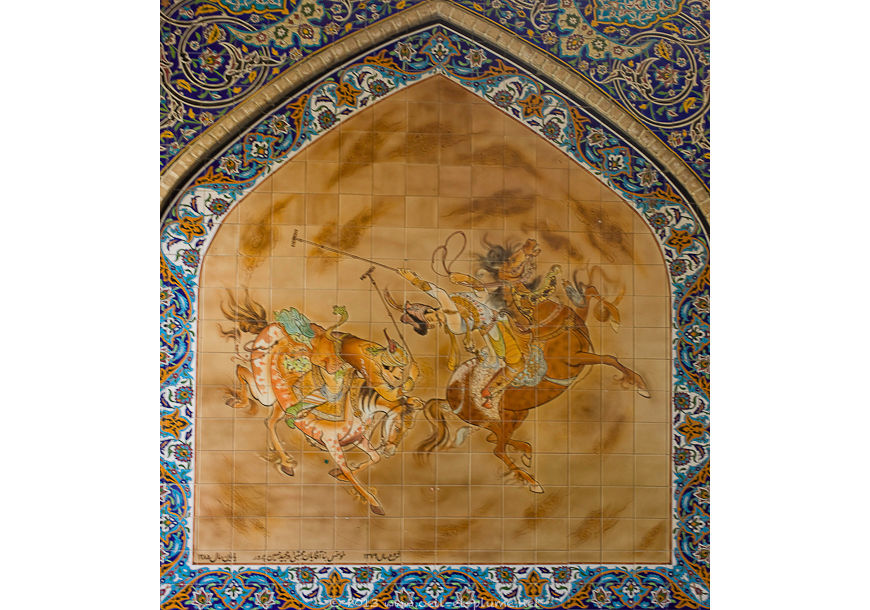 On the next day, I come back early to Naqsh-e Jahan Square in order to better capture its atmosphere. Today is Friday. I just reach the site after the prayer. Carpets are already been rolled in front of the mosque while the place is being cleaned. After prayer, families traditionally gather in side alleys for breakfast, chat and leisure time. 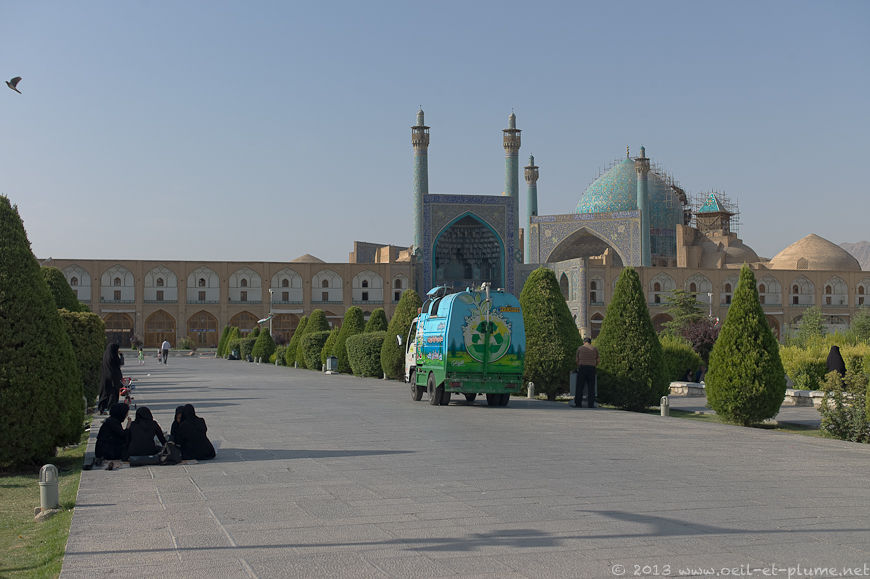 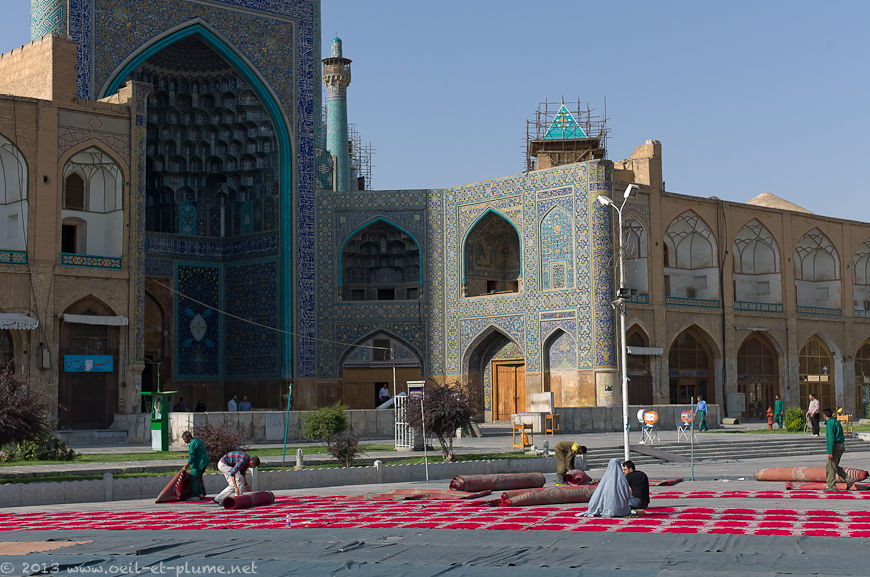 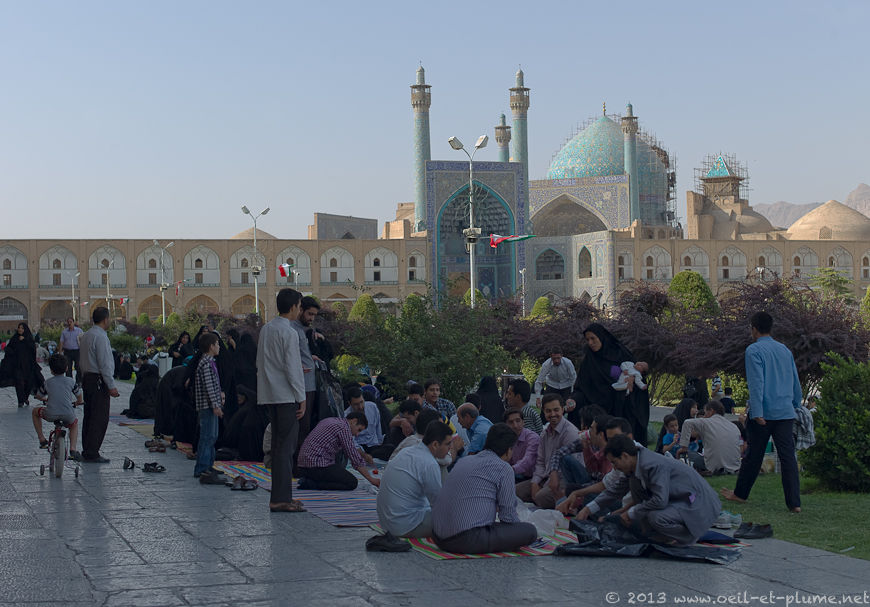 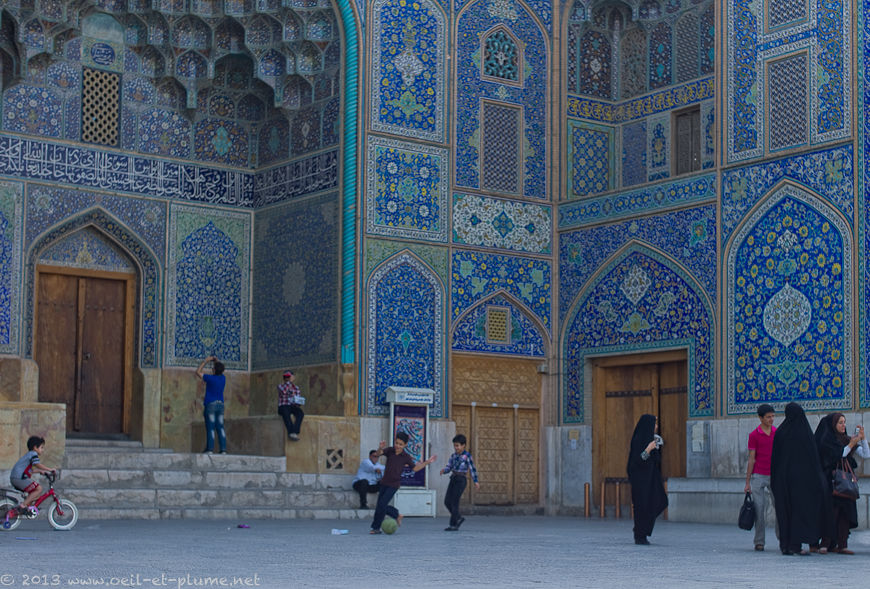 A bit shy not to disturb them, I shoot a few snapshots. One of them does not go unnoticed. The girls approach and tease me, not at all annoyed by the shot. Two of them exhibit an operated nose, as it would add to their natural beauty. 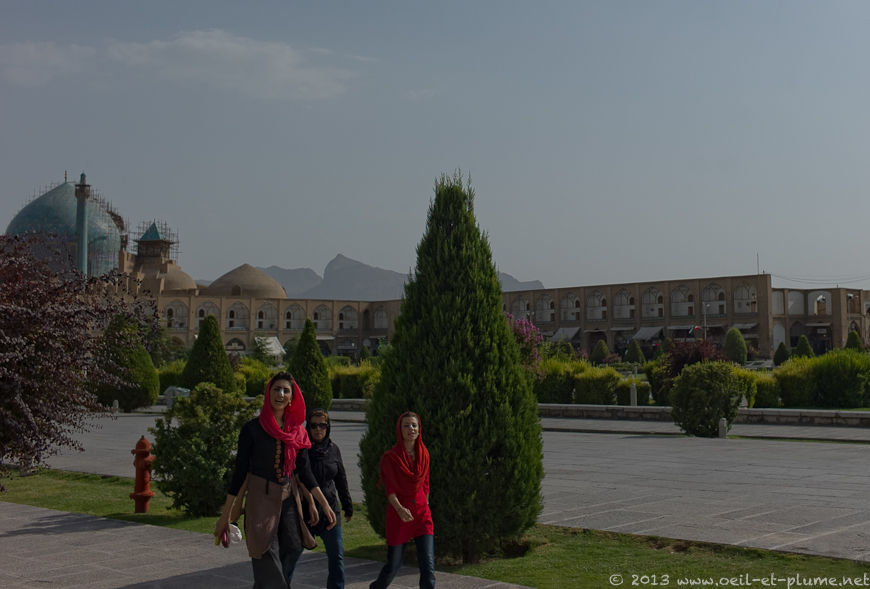 I enquire by Iranians met during my journey about the high number of young women who undergo nasal plastic surgery. The rationale for such surgery is less aesthetic than sociological, I am told. The trend would represent a way for young females to assert themselves and their right to define their own life path, to start with the shape of their nose. In any case, I do not notice anything wrong with the original shape of Iranian women’ nose…

In another chapter of my Isfahan stay, I head on the next day to the Qaisariya Bazaar, located on opposite to Shah Mosque around the Naqsh-e Jahan Square. Retrospectively, I should have spent more time there to better document the variety and finesse of handicrafts produced and sold there and the subtle or crude lights illuminating one of the biggest and oldest bazaars in the Middle East. Never mind. The following overview is very telling I believe, for you and me to deepen as soon as possible. 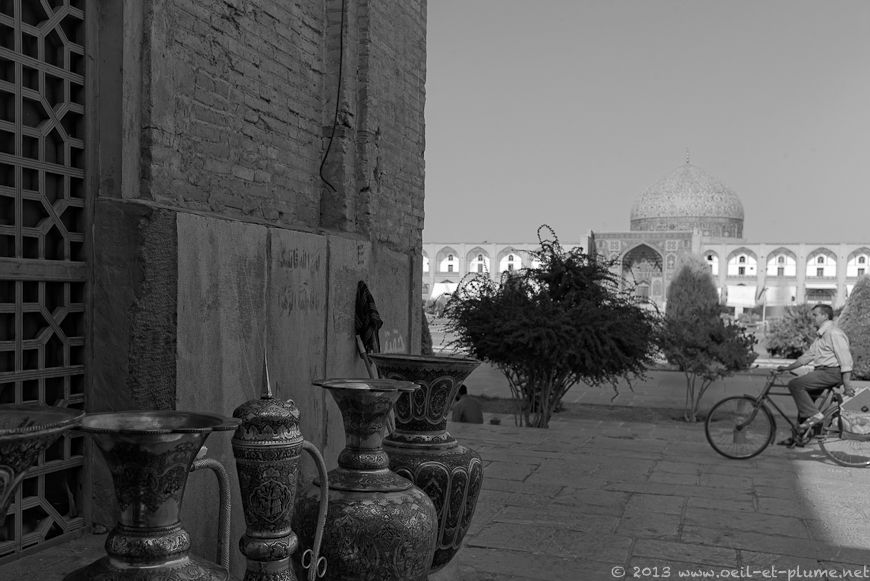 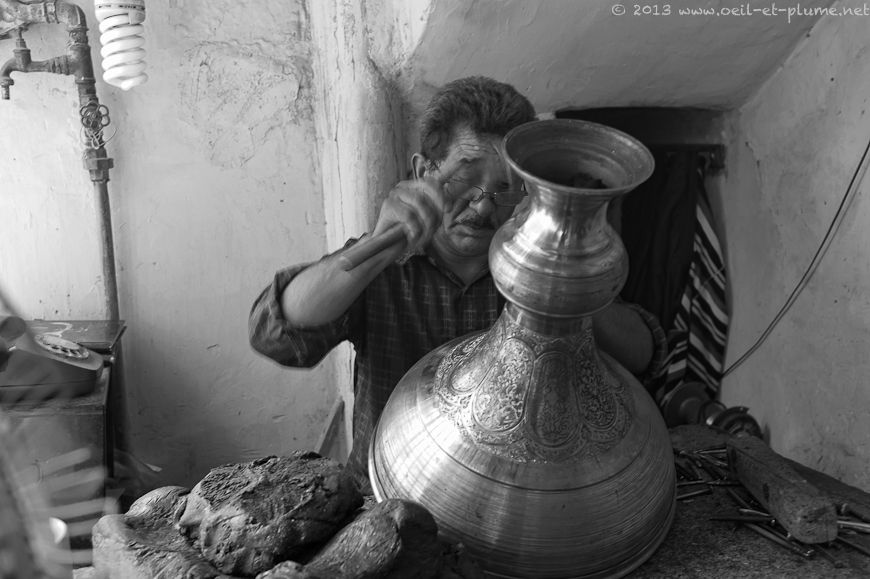 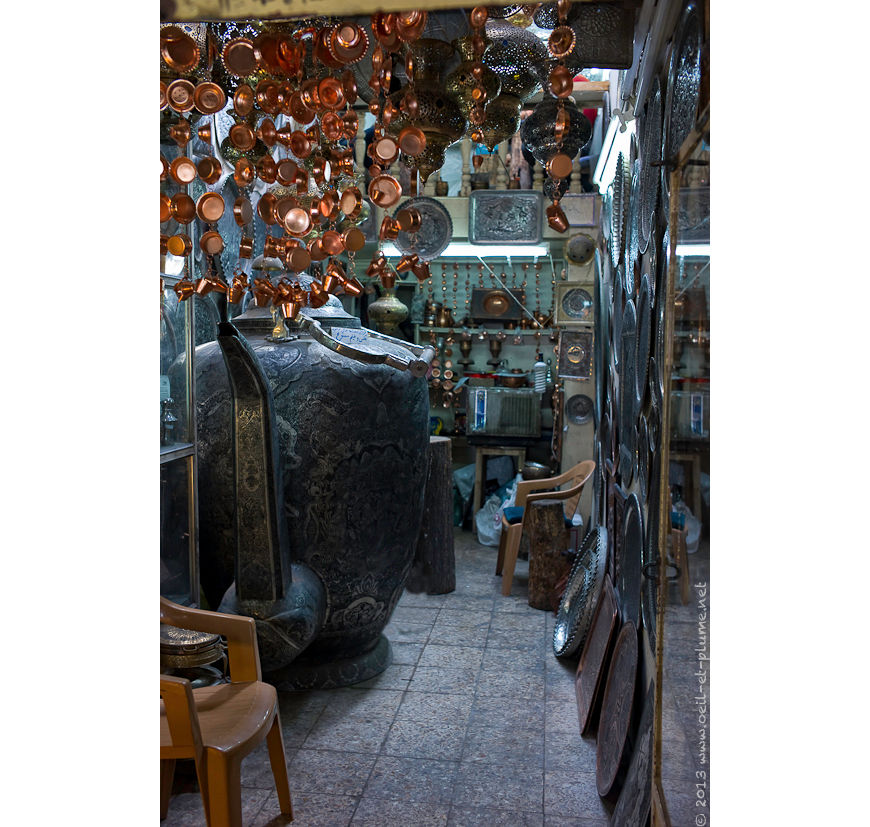 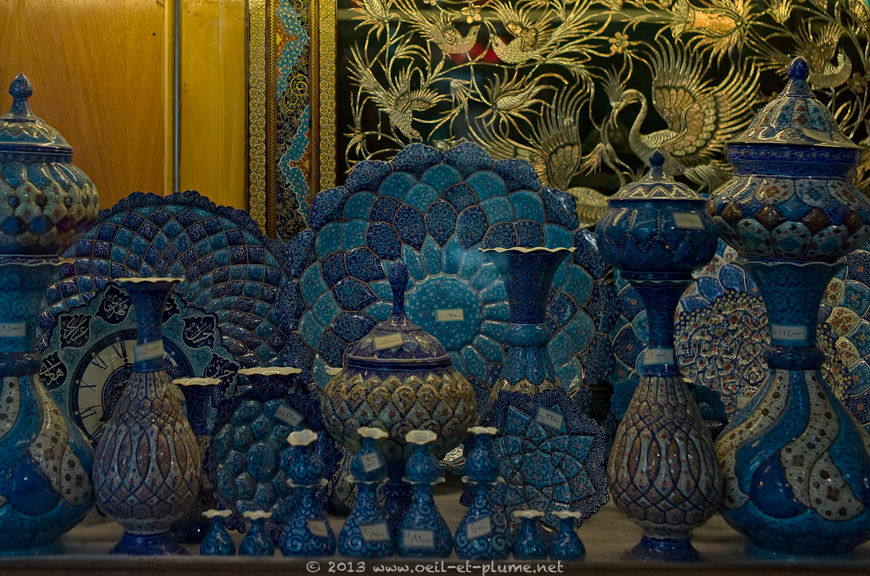 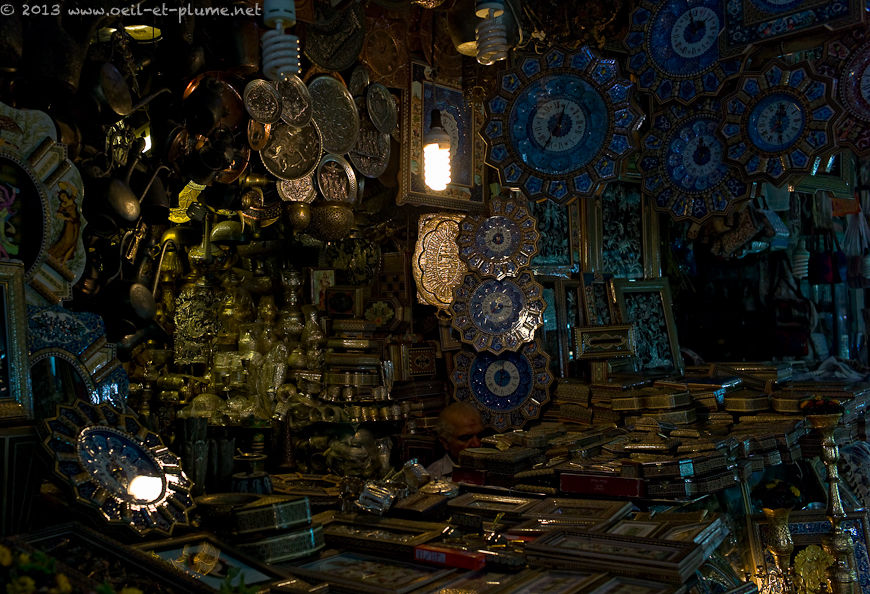 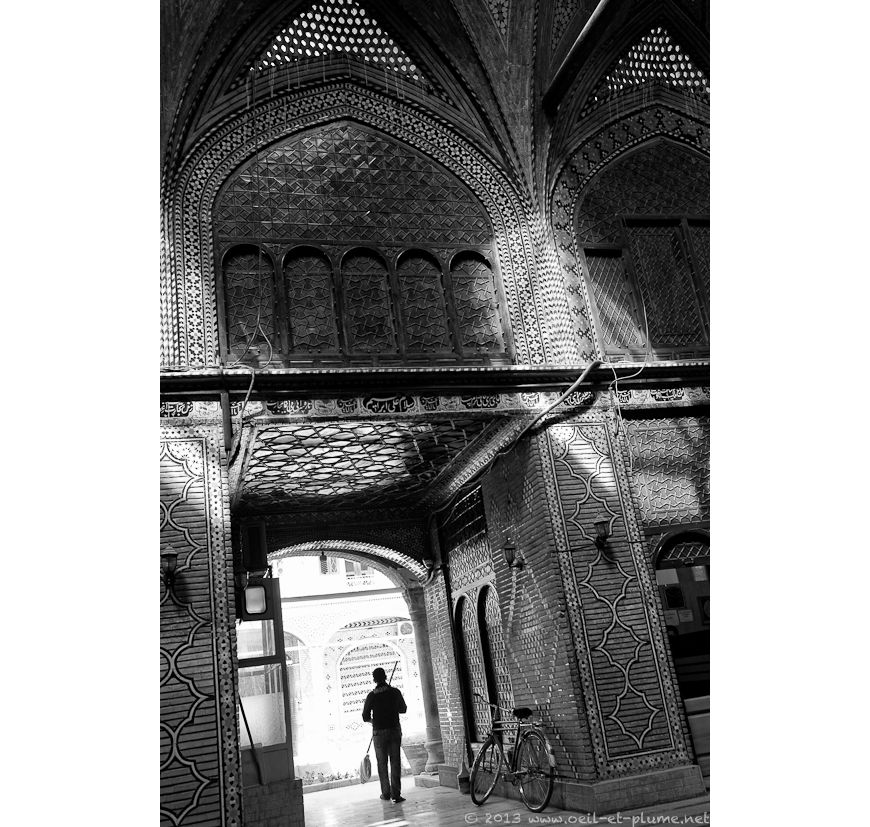 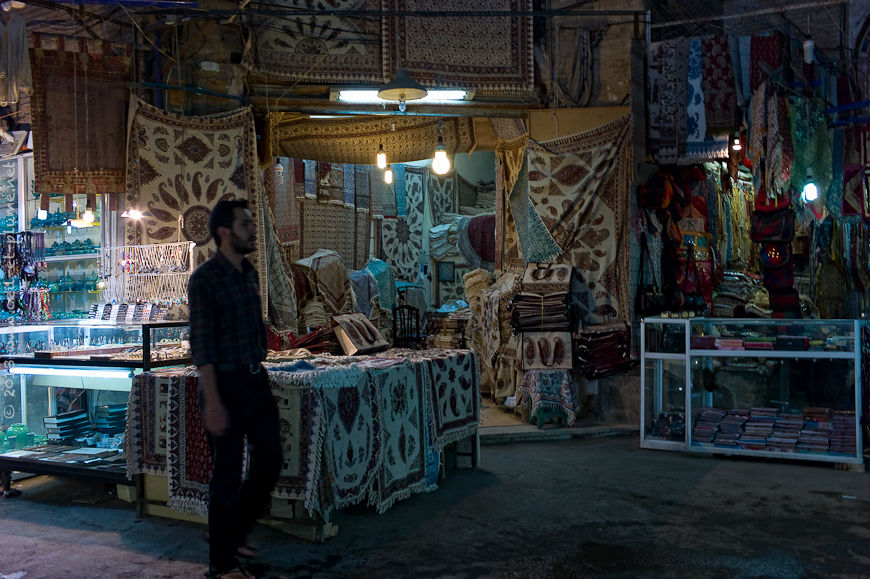 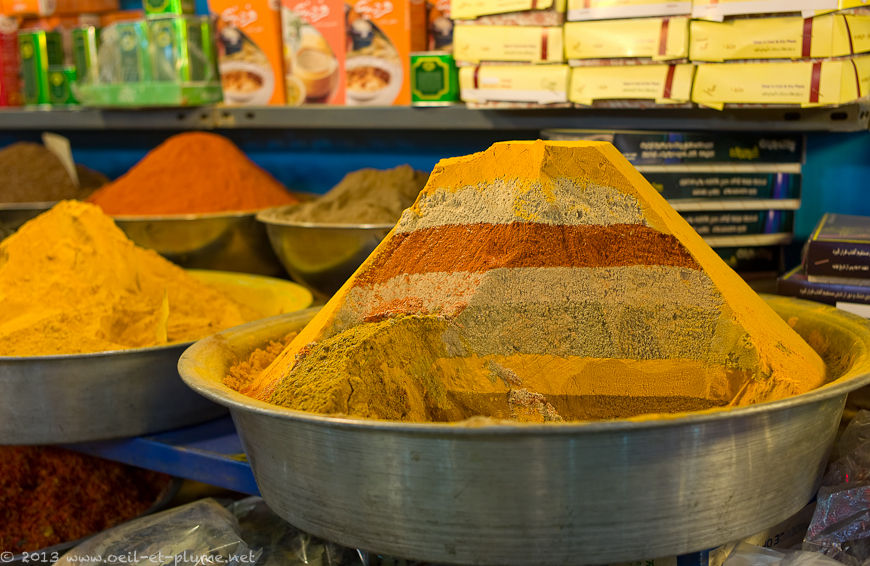 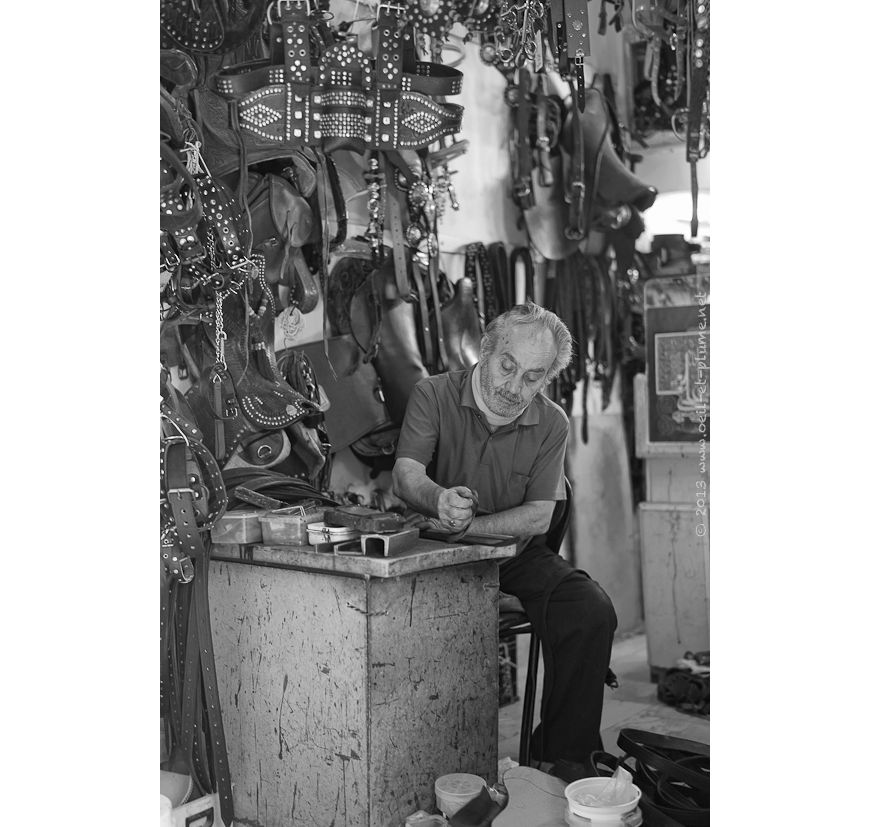 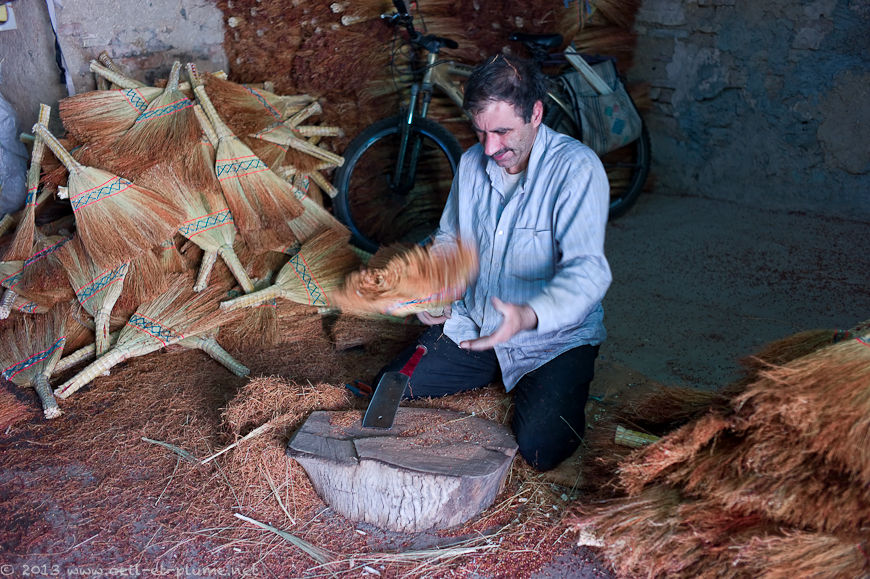 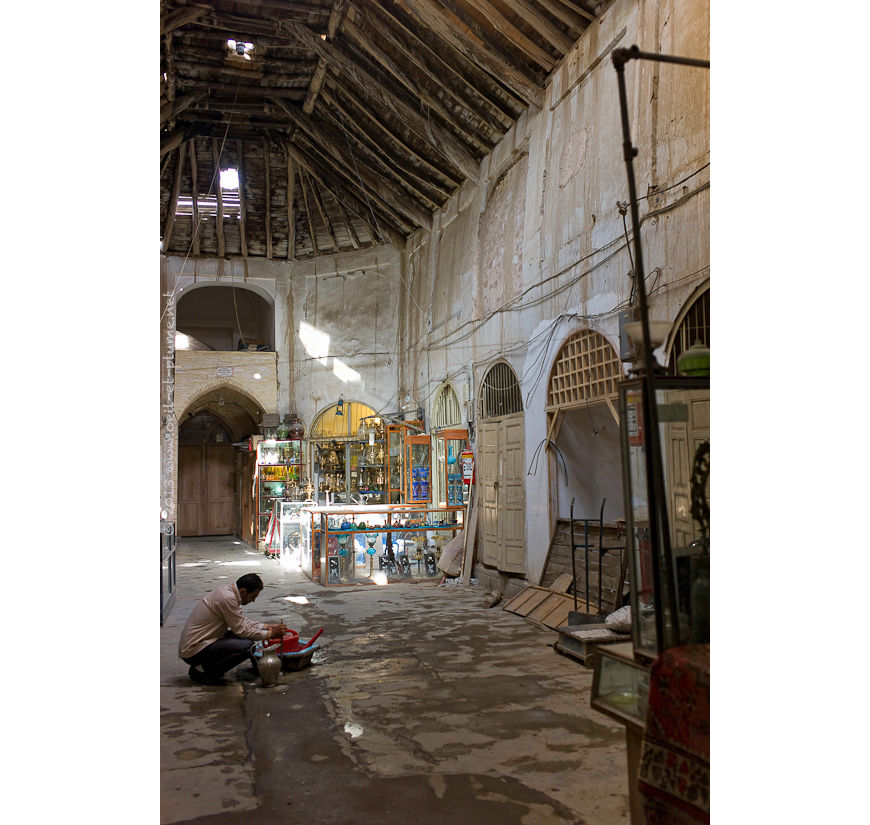 As Isfahan would be architecturally not rich enough, Jameh Mosque is one of the most beautiful religious buildings in Iran, listed indeed by Unesco. The religious complex was built in successive steps starting from the 8th century, but also transformed or rebuilt until the 20th century.

I visit the Jameh Mosque on the last day of my Isfahan stay, as a kind of summary of enlightened human minds and skilled hands can produce with only brick, tile and paint as raw materials.

In the centre of the religious complex, a large open space where one feels at ease regardless of his/her religious credentials. On each side, a vaulted open room (iwan), placing two pairs of gates face to face. Each iwan presents a distinctive architectural style, ranging from the Seljuk to the Safavid dynasty (respectively 10th and 17th century). 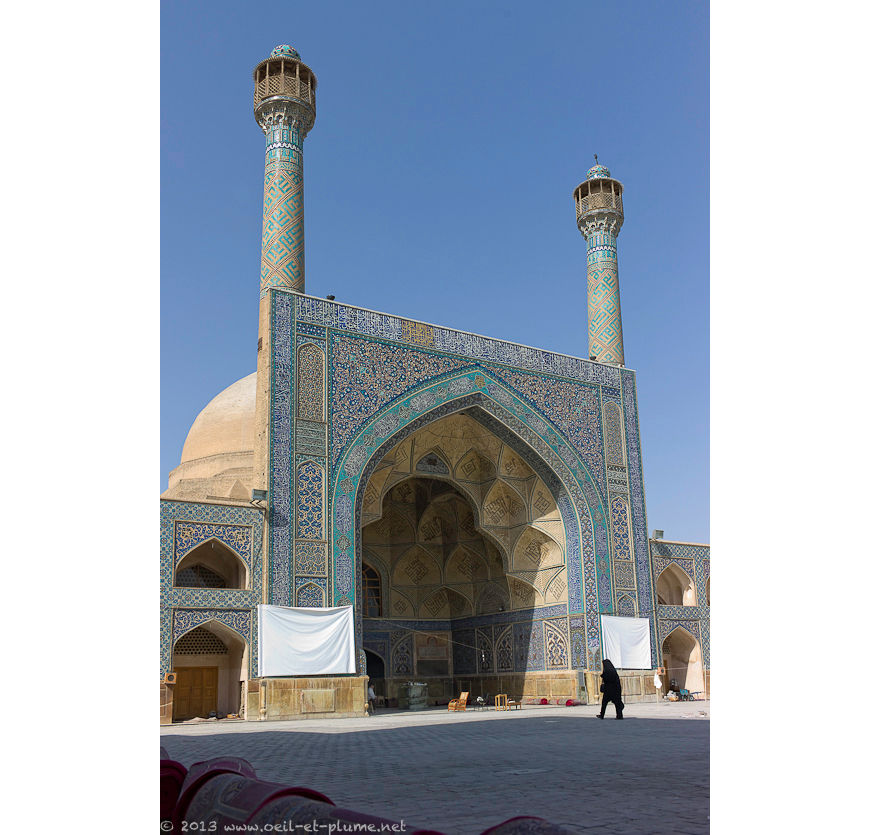 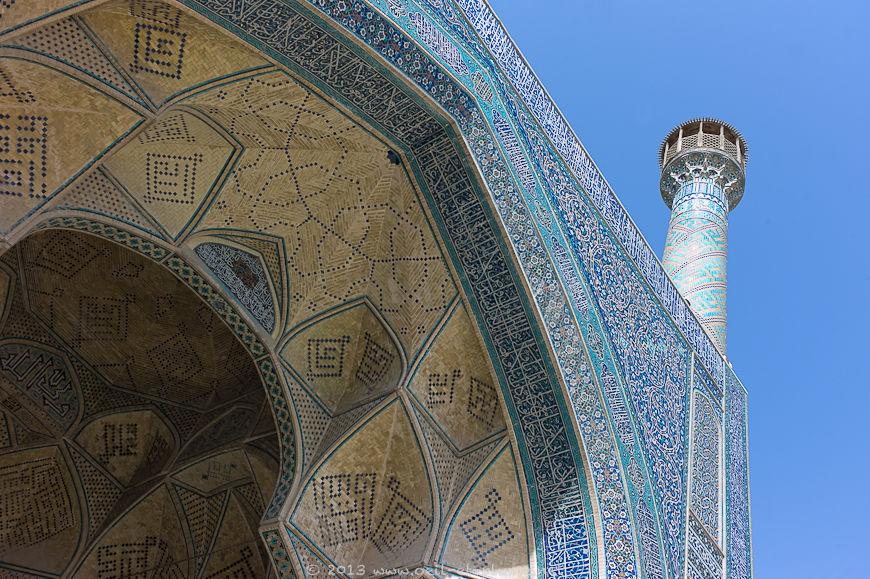 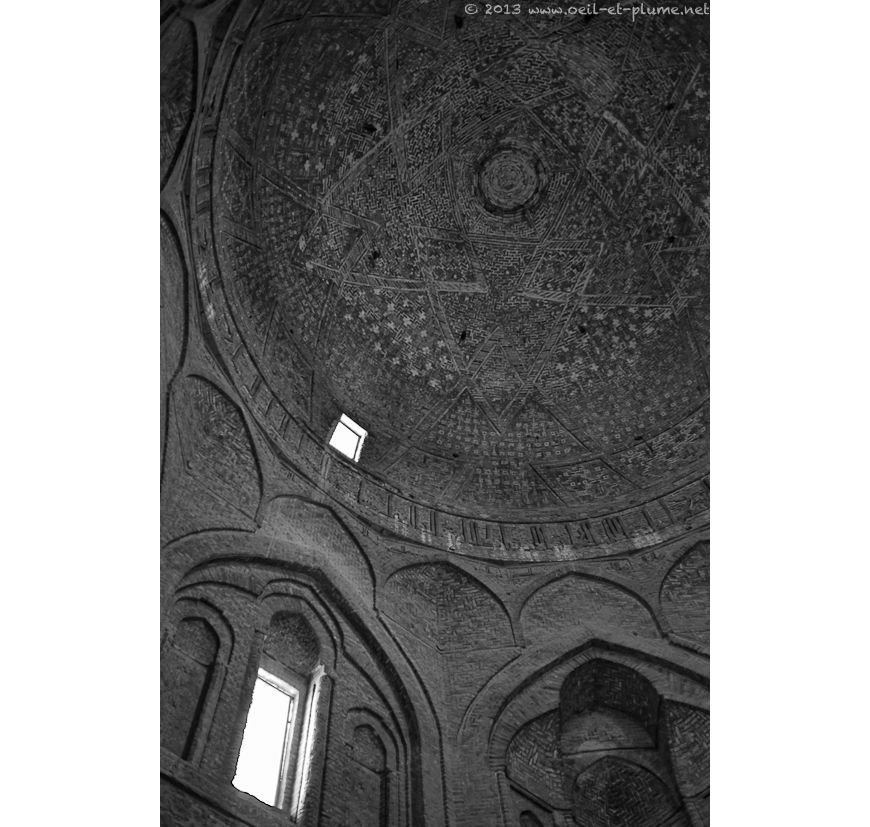 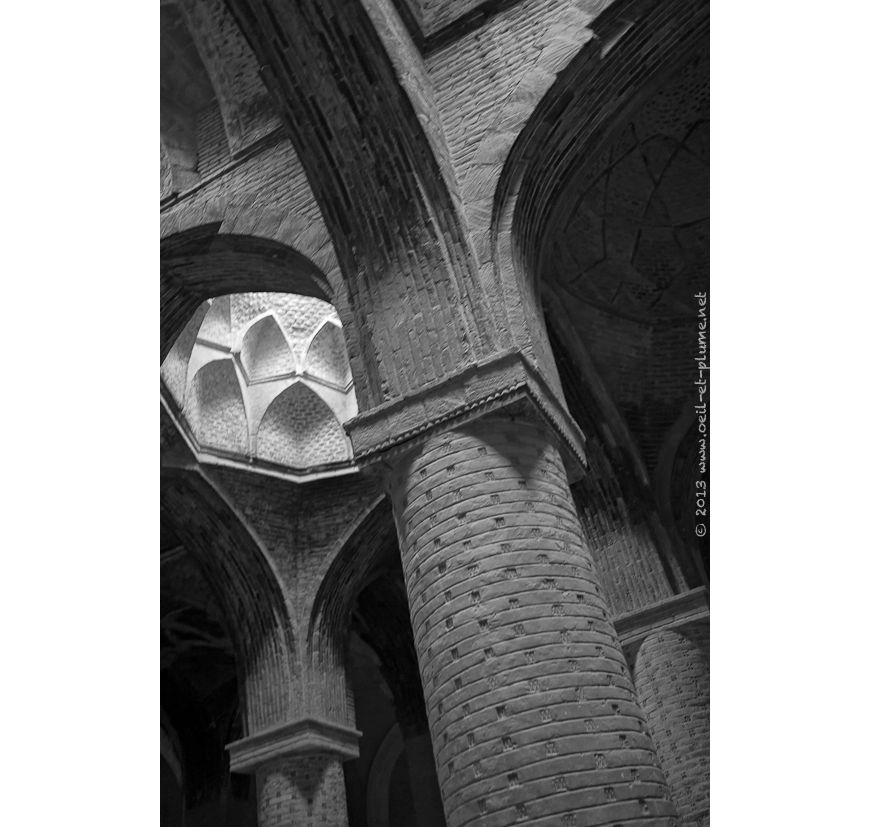 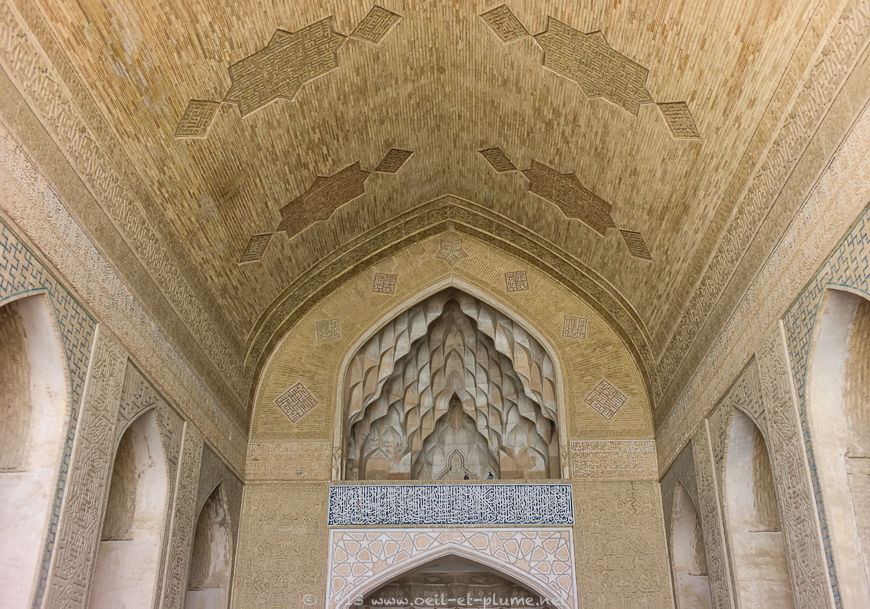 Beyond mere architectural beauty, I like the strong positive energy conveyed by the site to the visitor. Jameh Mosque is definitely the best place in the former Persian capital to sustain the proverb claiming that Isfahan is half of the world.