It took me years to decide visiting Tokyo. I am not that fond of megalopolis. Henceforth Tokyo, the world’s most populous metropolitan area with over 35 millions residents, was not at first at the very top of my globetrotter’s list.

I finally found my way to the capital of Japan, stayed there for a week and had a great time. A busy time spent commuting in crowded underground or areal trains; a long time trekking the multifaceted cityscape; a hard time deciphering Japanese sign posts; a nice time meeting and interacting with Tokyo’s residents.

Tokyo is administratively not a city, but a complex architecture of wards and municipalities regrouped into a metropolitan prefecture. It hosts a very diverse population. Out of this complex social fabrics, you will be proposed hereafter four different but overlapping and complementary social realities in Japan’s capital: (i) Traditional Tokyo; (ii) Everyday Tokyo; (iii) Business Tokyo, and (iv) Young Tokyo. Let’s start with the historical Tokyo.

The Tokugawa clan establishes its base in Edo in the late 16th century, from where it develops its strong military regime across the country. Edo grows tremendously to become one of the biggest cities in the world in the 18th century. In 1869, the Meiji Emperor moves his residency and court from Kyoto to Edo, renamed Tokyo (‘eastern capital’). Tokyo town and imperial capital are born, adding the imperial prestige to the bursting political, economic and cultural life that prevailed before the Meiji Revolution.

Tokyo’s history is not just a success story. The metropolis suffers two major disasters in the 20th century. The 1923 earthquake and the World War II cause mass casualties in the hundred thousands as well as massive material damages. Therefore, Tokyo’s cityscape is made primarily of contemporary architecture. Historical buildings are relatively few, from the imposing Imperial Palace to humble wooden homes scattered in various neighborhoods. Not to mention the ubiquitous religious temples, shrines and pagodas. 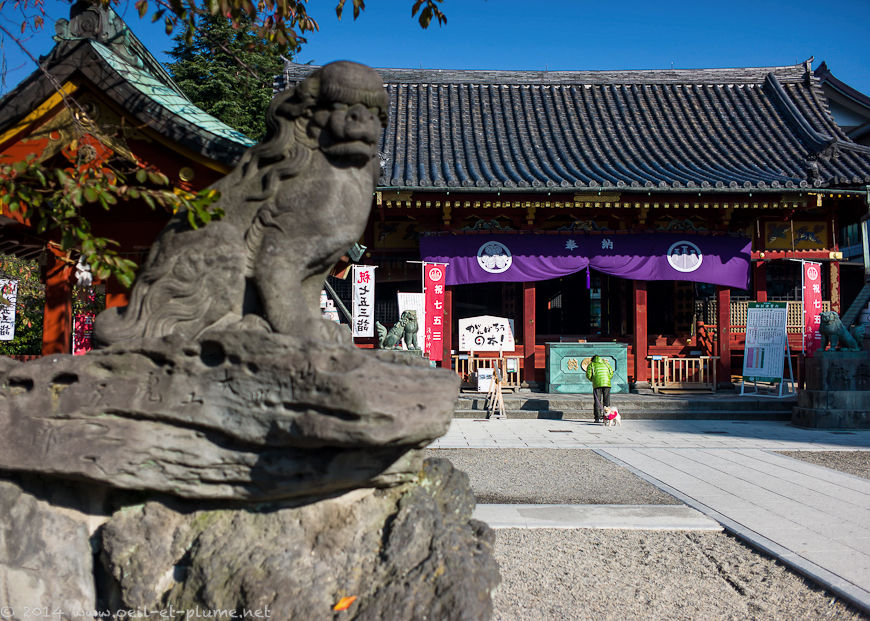 Upon arrival in Tokyo, I head and settle in Asakusa – one of the most traditional neighbourhoods. Contrary to my initial plan, I spend my whole stay based there, feeling too well to move elsewhere. Asakusa-jinja, major Shinto shrine, attracts daily flocks of visitors, Japanese as foreigners. Despite the highly commercial orientation of the surrounding area, Asakusa shrine exhales a strong religiosity. Senior pilgrims, but also young Japanese fashion victims, pay daily tribute to the local deities. 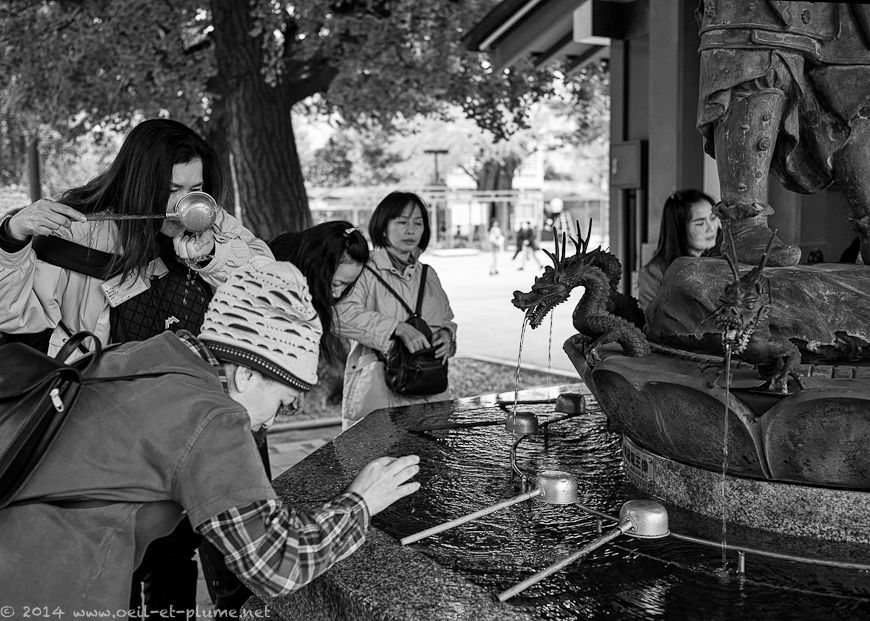 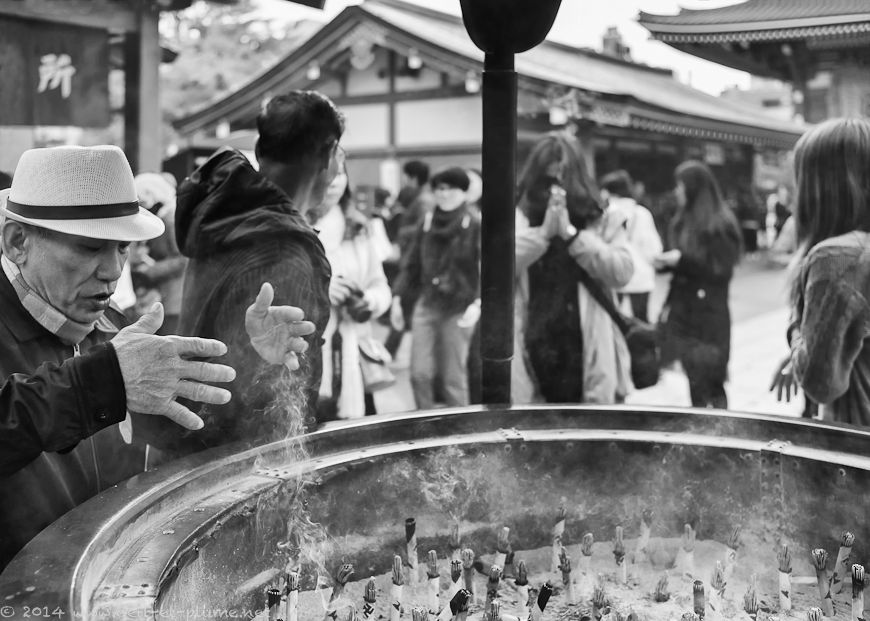 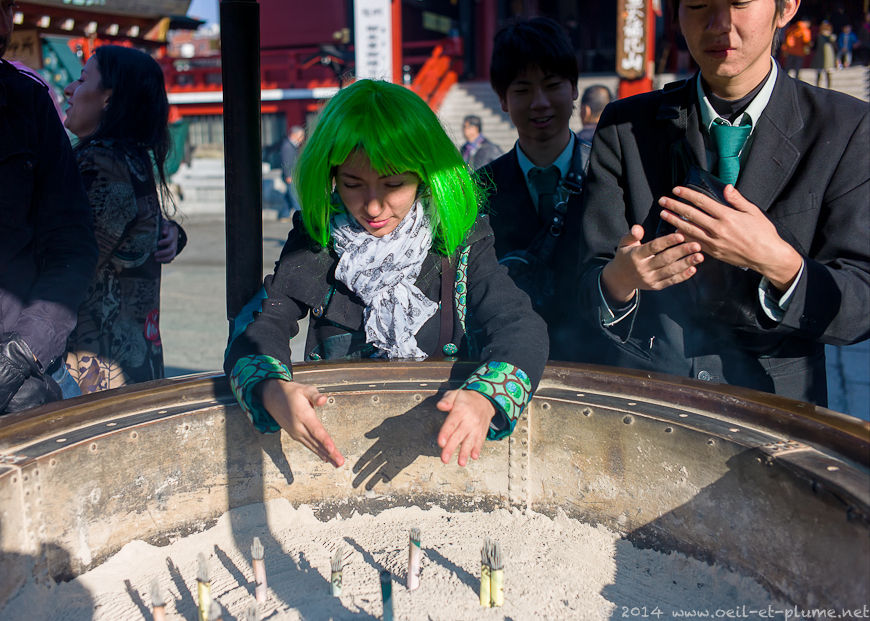 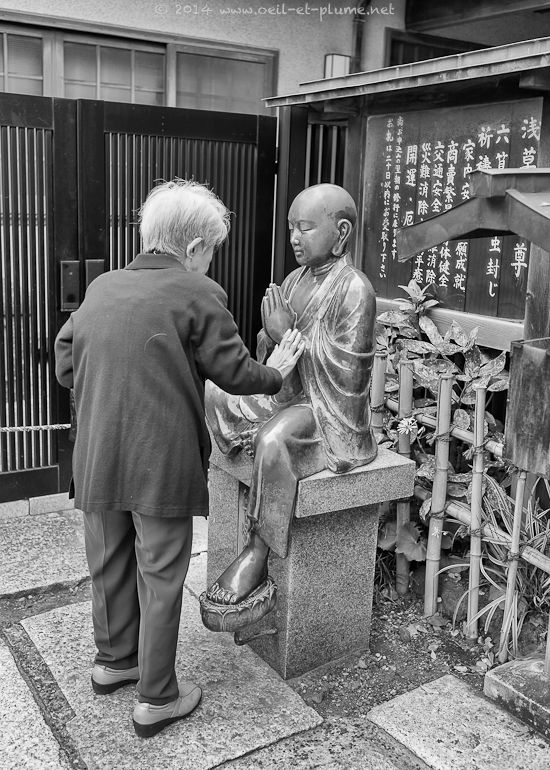 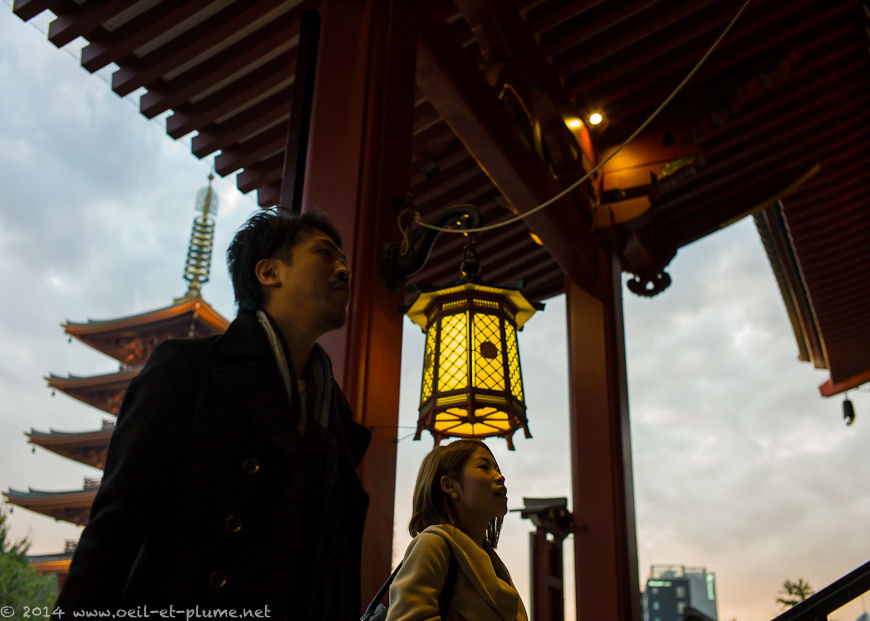 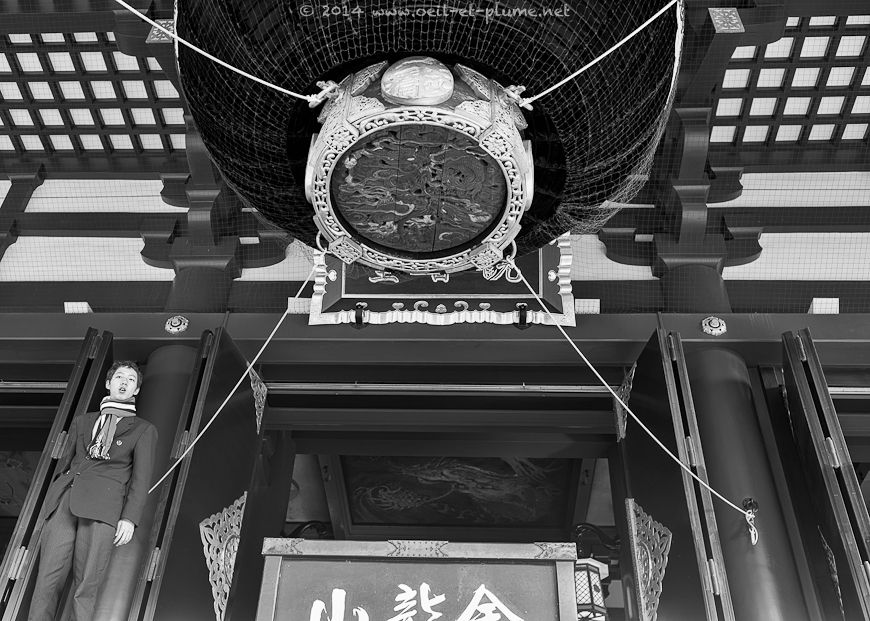 I visit Asakusa-jinja at least daily during my Tokyoite week, hunting the most memorable moments in the most photogenic locations of the site. Much of the charm of the site emanates from outside the busy central area – in the side shrines, statues, steles and gardens. Religious beliefs and Nature are highly intricate in Japan’s Shintoïsm. 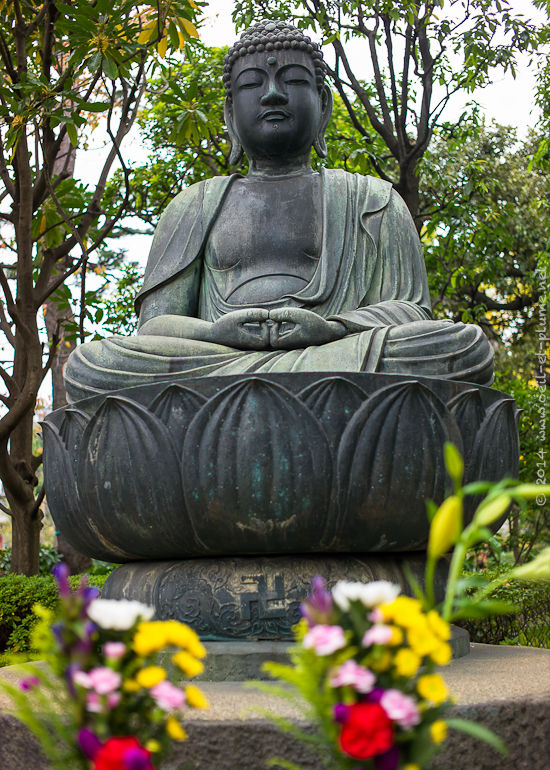 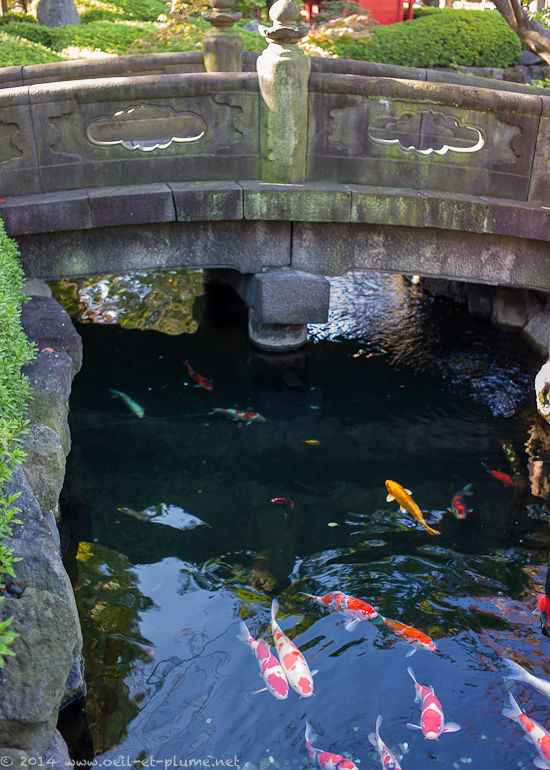 Maybe tired of my repeated visits, Asakusa Shrine is kind enough to hint me at the Shichi-Go-San festival held today on the other side of Tokyo. Let’s go and see. 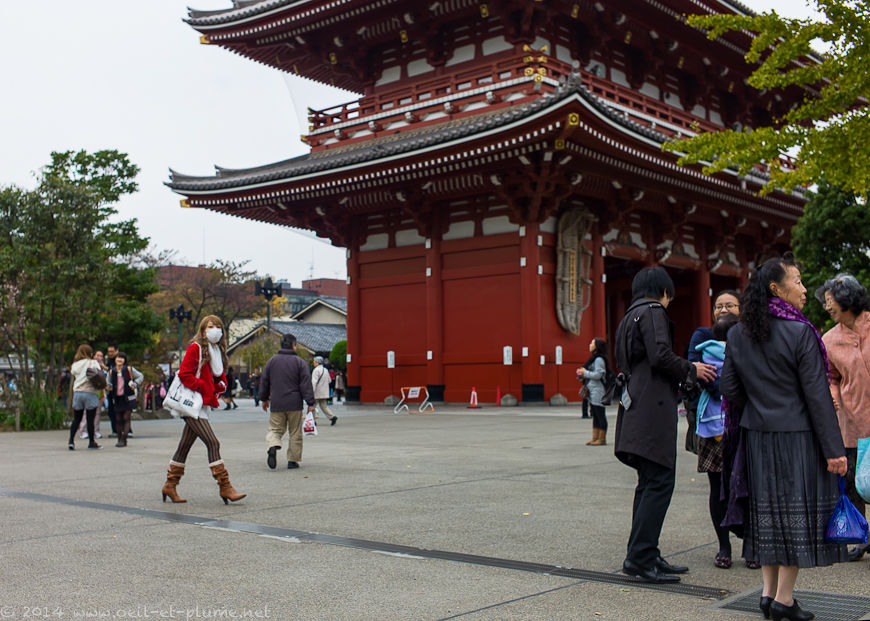 Meiji-jingu is Tokyo’s main Shinto shrine, built early 20th century and dedicated to Meiji imperial family. The main shrine and its secondary buildings are lost in an immense urban park planted with high trees. Once a year, families gather to celebrate the Shichi-Go-San (7-5-3) festival. Girls aged 7 and 3 and boys aged 5, are celebrated on that day. Dressed with fine clothes, the children and their parents convey prayers for their good fortune to the deities. 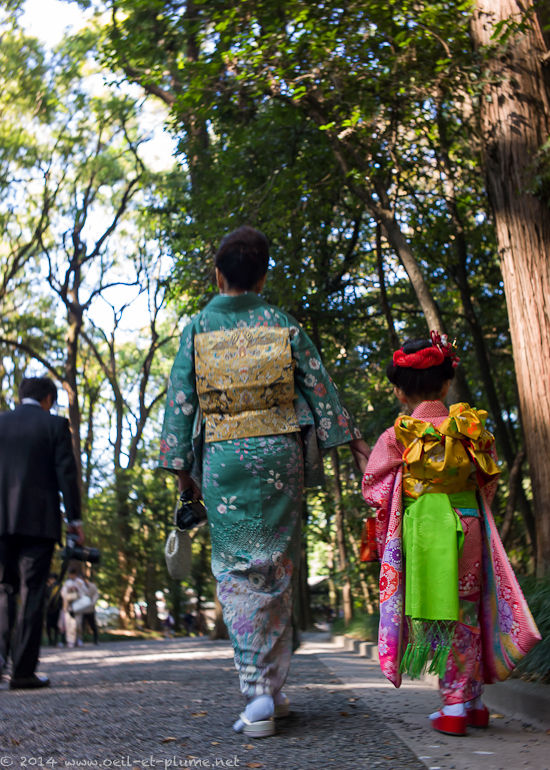 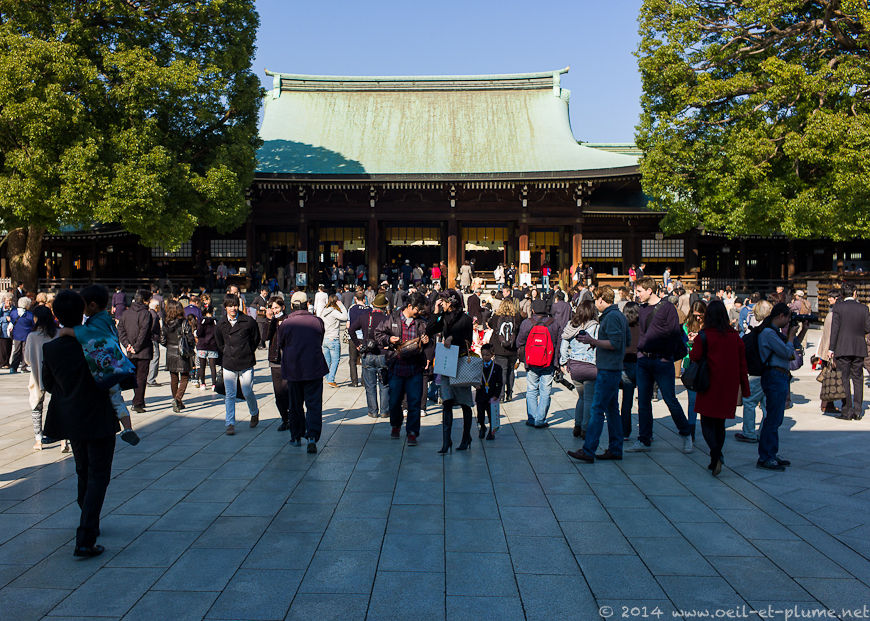 Visiting families prepare their prayers on votive tablets that they hand over to the Shinto priests within the shrine, for them to forward the pious messages to the gods during a religious service. Eventually, the votive tablets are hung in the central court for display and inspiration. 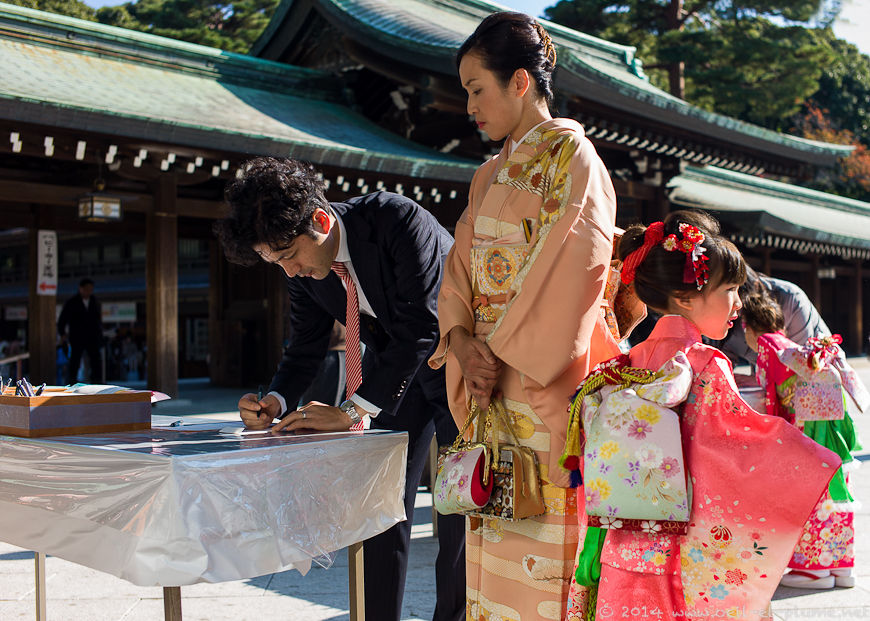 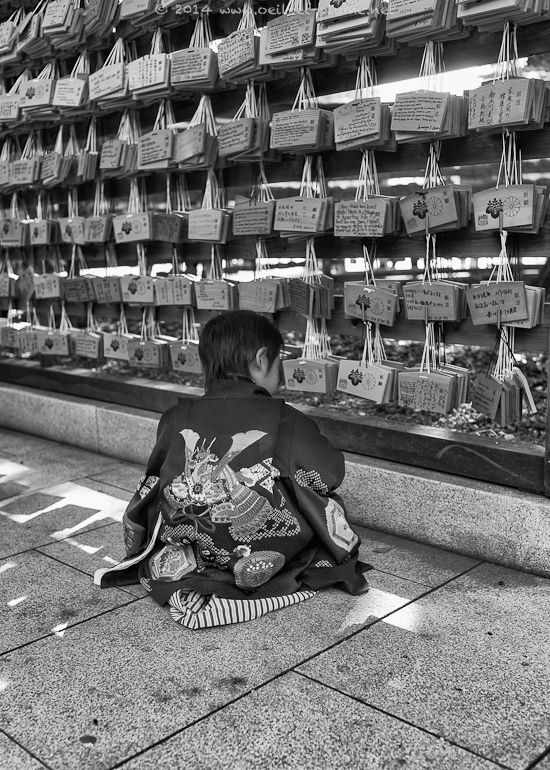 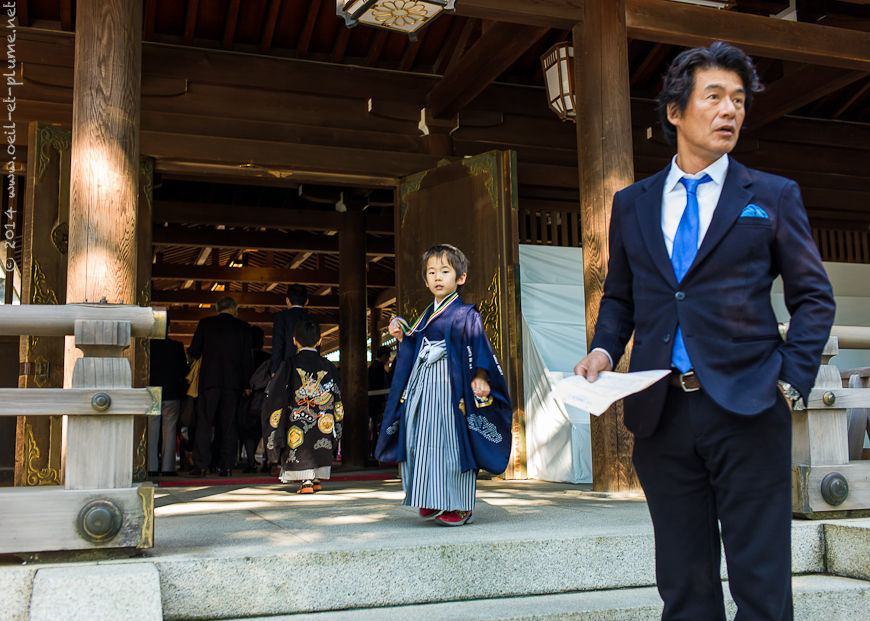 While roaming around to capture the quintessence of the festival, I notice periodic wedding corteges crossing the main hall of the Meiji Shrine. Regardless of Shichi-Go-San festival, the Meiji Shrine is a highly sought-after place for celebrating traditional marriages. I fall in love at first sight with the intriguing and delicate cap of the Japanese brides. I am convinced that you just did so too. 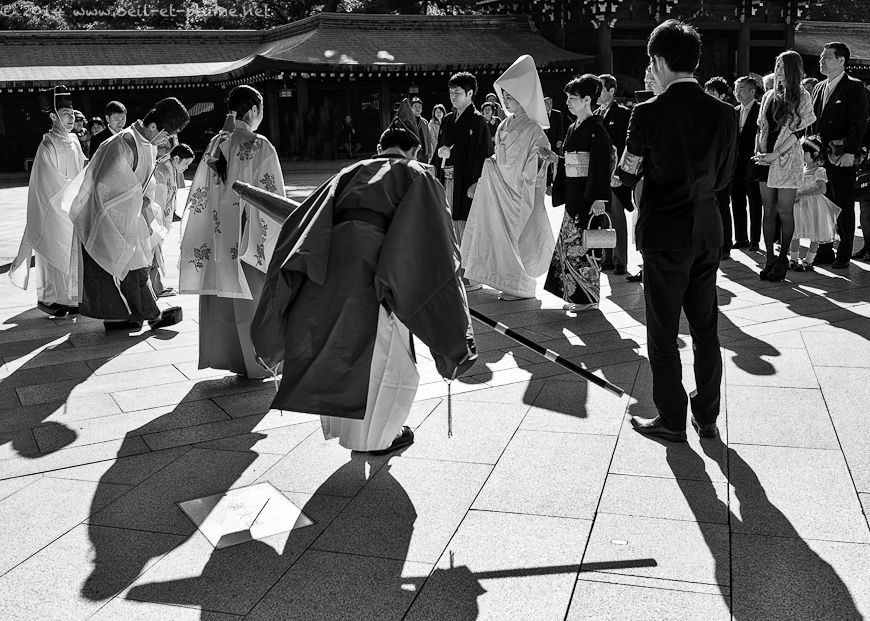 After the religious ceremony, the newly married couples and their relatives converge orderly to the official photographer’s open-air studio. The photographic poses are highly severe and classical, uninteresting in my taste.

Japanese people are known for their collective organisation and discipline. The wedding group leaves the open-air studio with no delay. Soon after, the Shinto clergy and the photographer’s team start the process again with another couple and family. In Tokyo’s megalopolis, traditional Shinto wedding ceremonies are run in Meiji Shrine uninterrupted until dusk.

Informal breaks during the wedding celebration create more attractive photographic opportunities. My camera is fascinated by the refined dress and hair architecture of the Japanese brides. Even in their finest outfits, Japanese grooms look pale compared to their female companions. 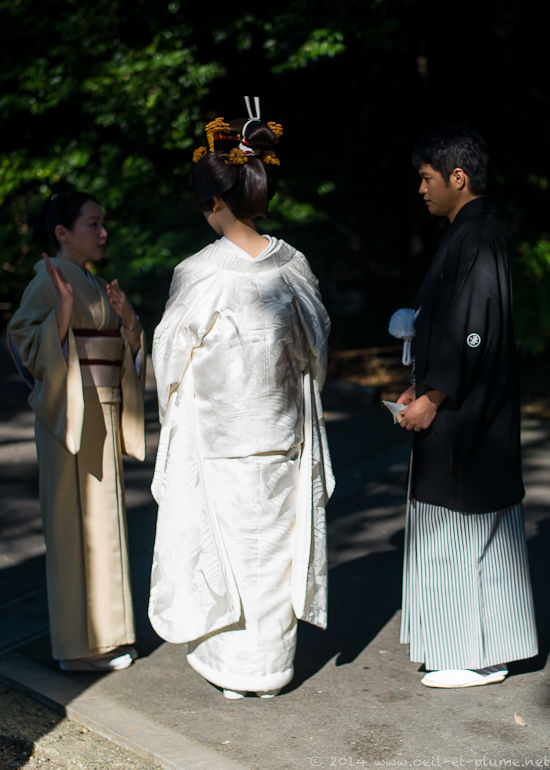 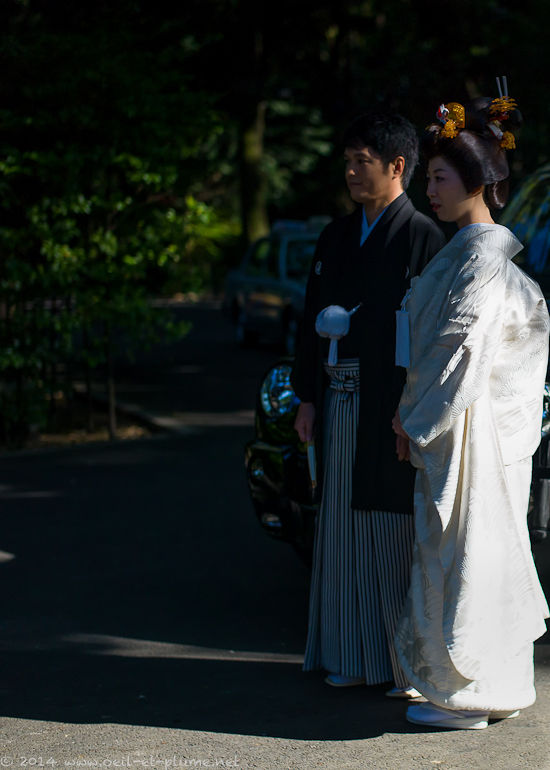 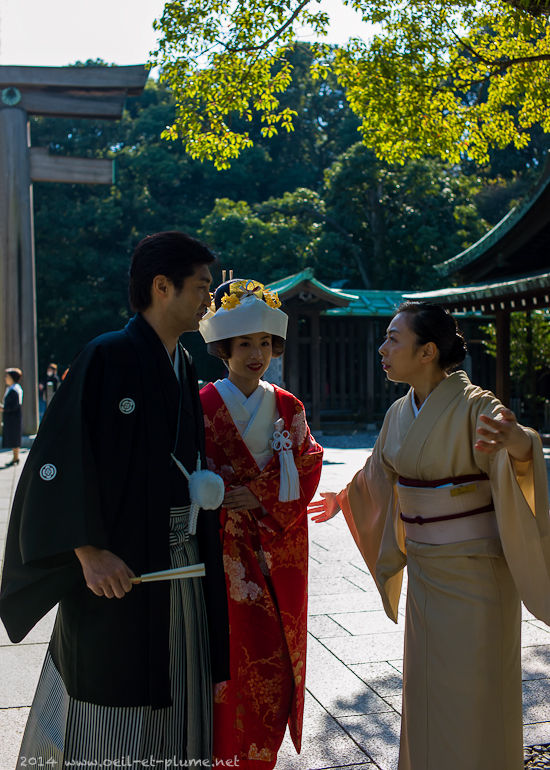 The day is over. Two wooden structures presenting colourful barrels escort my way out. On one side, a variety of Japanese rice wines (sake), mirrored on the other side by a collection of fine French wines. Both alcoholic drinks are official gifts to the Emperor from respectively the Japanese sake producers and the French government. 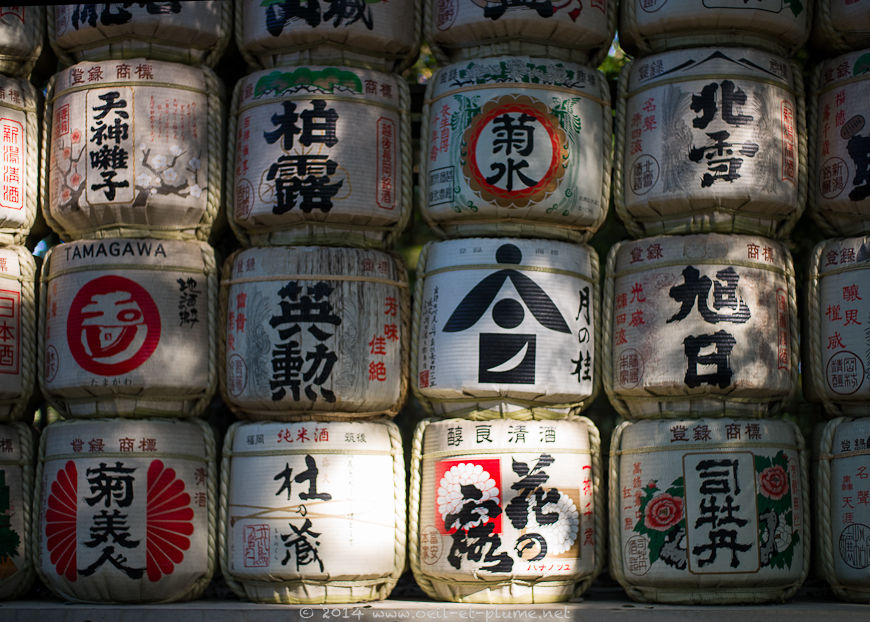 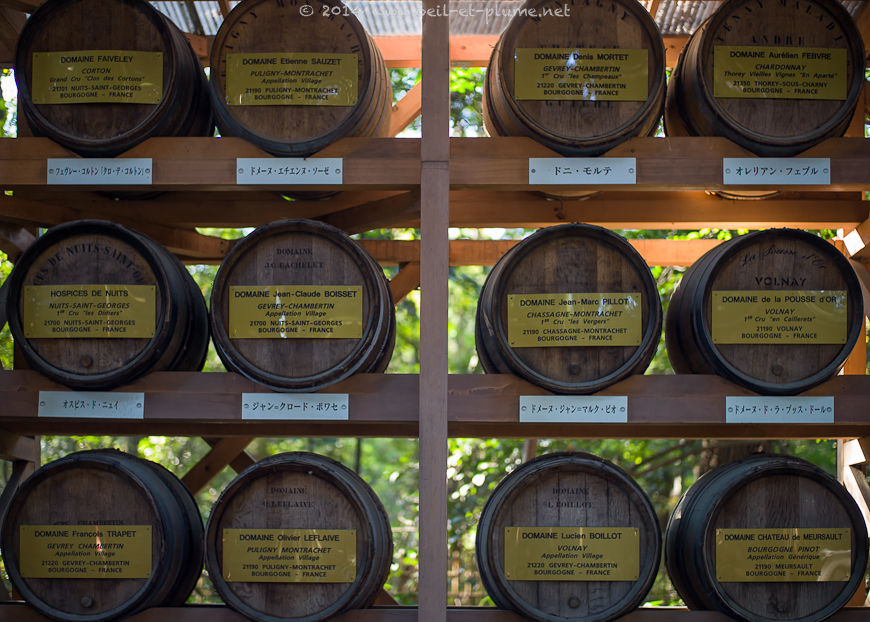 No need to introduce you at length to the sumo. The Japanese iconic martial art is so famous worldwide that it attracts nowadays scores of practitioners from across the globe. Some of them count amongst the best sumo wrestlers in Japan.

Far from being a sumo fan, I had in mind to approach this enigmatic sumo microcosm. Visually, the heavy silhouettes of sumo practitioners clash frontally against many facets of Japan’s refined culture. In fact, the wrestlers, albeit looking raw, slow and fat, rely on a tremendous physical and mental power, technique and agility.

The sumo world is not only paradoxical and counterintuitive, but also highly lucrative. Attending sumo tournaments can be very expensive. Anyway, no major sumo competition was scheduled during my stay in Tokyo. 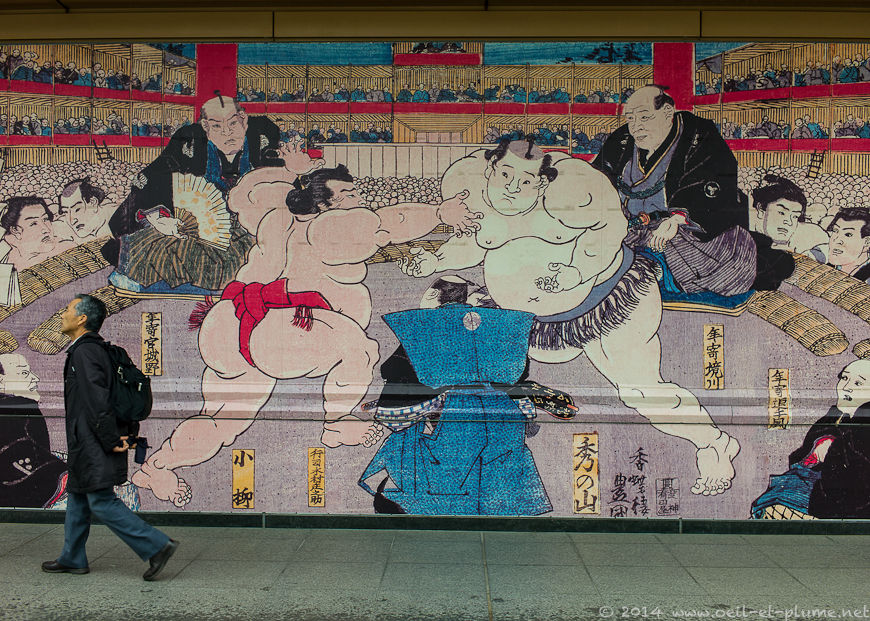 Traditional Tokyo entails many more intriguing and attractive socio-cultural facets. I hope to document more of them in a future stay in Japan’s capital.