Having left the Mursi, we head further into the Lower Omo Valley to visit the Karo people. Some 3,000 Karo tribesmen dwell along the banks of the Omo River. We reach the Karo village in the late afternoon under heavy clouds. 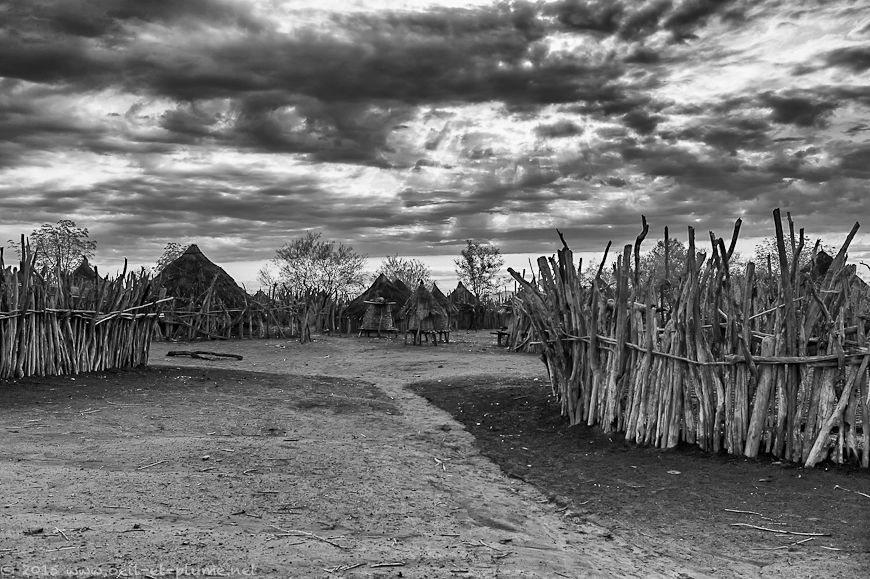 I love African skies – overall, so beautiful; so fast-changing that they appear highly moody; but so dramatically intense that they turn violent at times. As if the atmosphere and the main collective psyche of the human beings living underneath would influence each other. 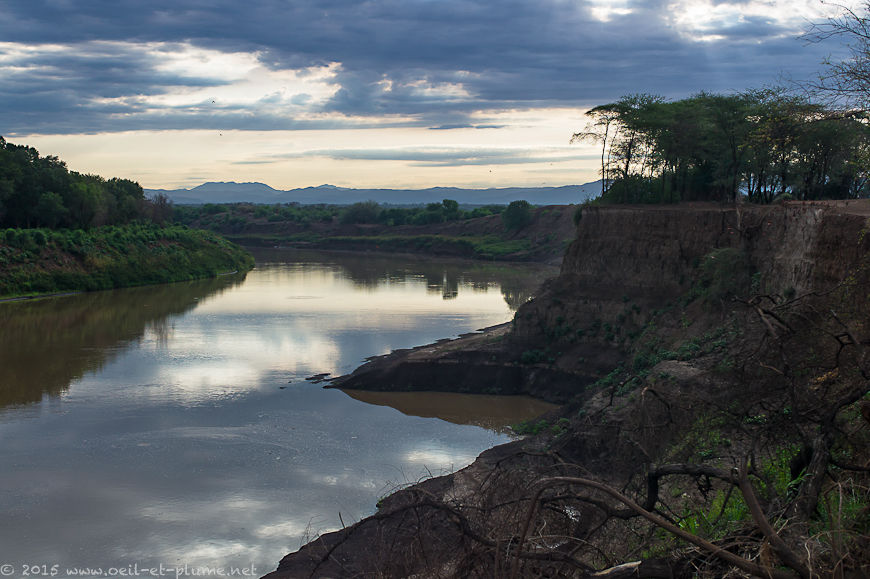 We camp on the Omo River bank in the farming area, leaving our visit to the village for tomorrow. Many families have a hut there, allowing them to rest and to better take care of their cultivated land. We stroll from one property to another.

Originally, the Karo had a strong foot into animal husbandry, owning and raising numerous pieces of cattle. For reasons unclear to me, they apparently lost much of their cattle and wealth.

Nowadays, Karo mainly practise flood-retreat cultivation on the fertile banks of the Omo River. They use the rich silt left along the riversides by the slowly receding waters to grow sorghum, maize and beans.

As rainfall is scarce and erratic, the annual flooding of the river feeds the rich local biodiversity and contributes very significantly to their food security.

Karo supplement their farming activity with fishing and hunting, as well as with the output of some goat and cattle herding. 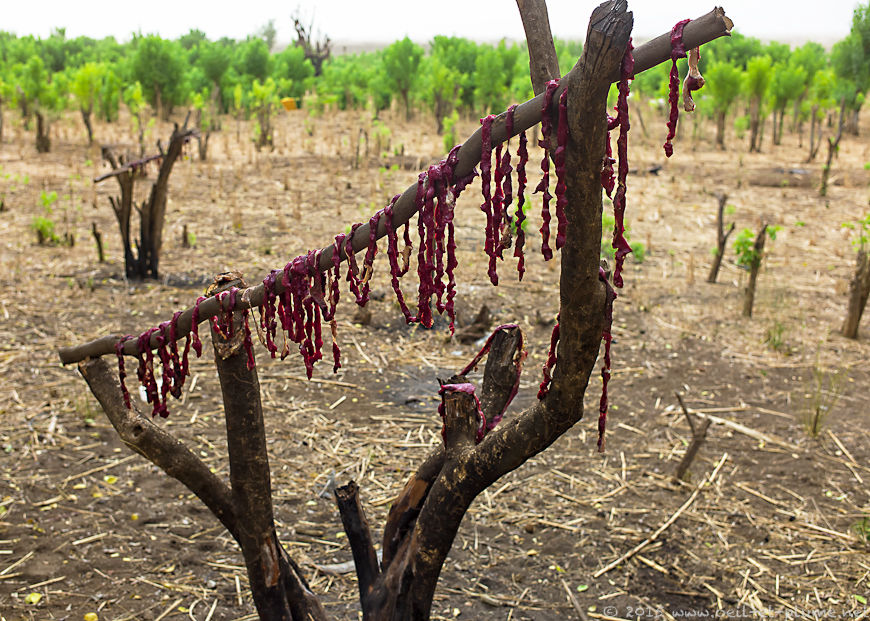 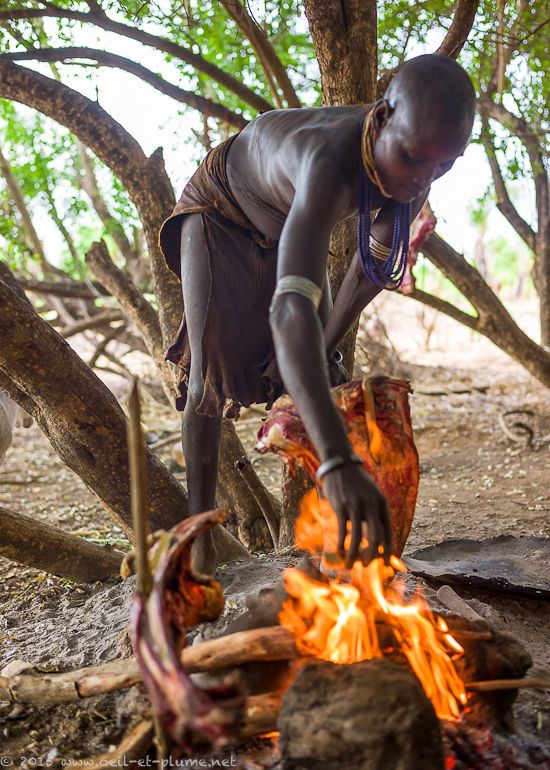 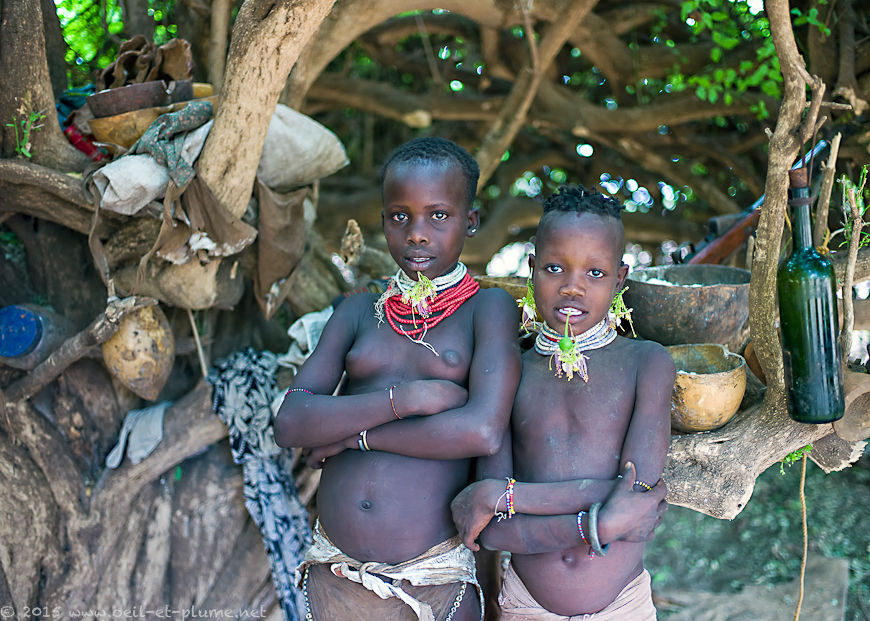 Food is visible everywhere in the Karo farms. Cow meat is set for air-drying before the night. Dinner is being prepared in the kitchen. 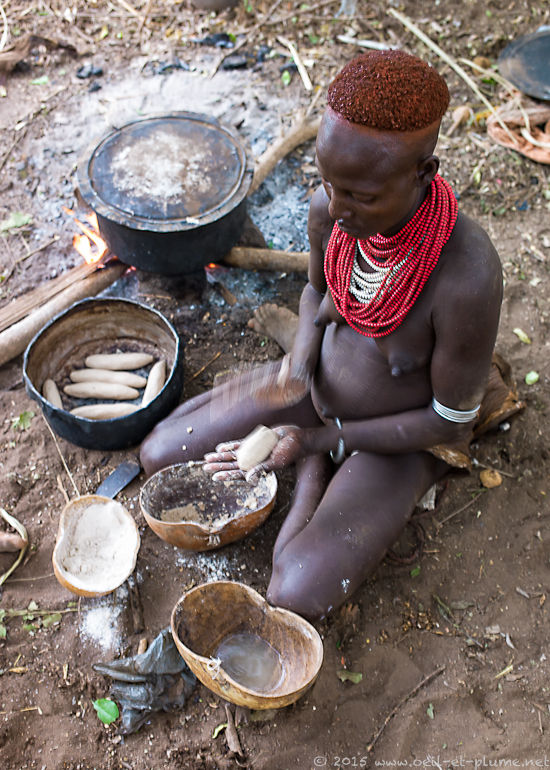 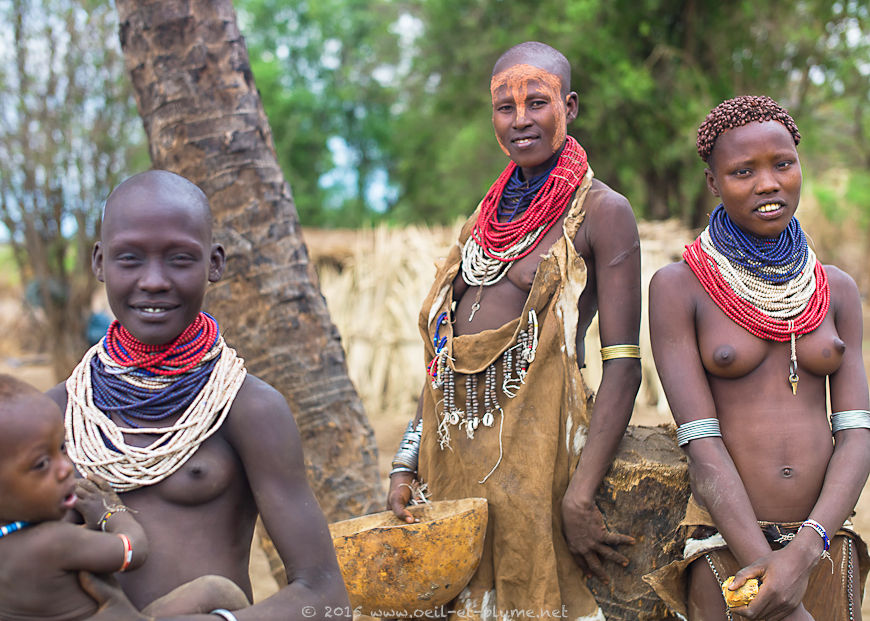 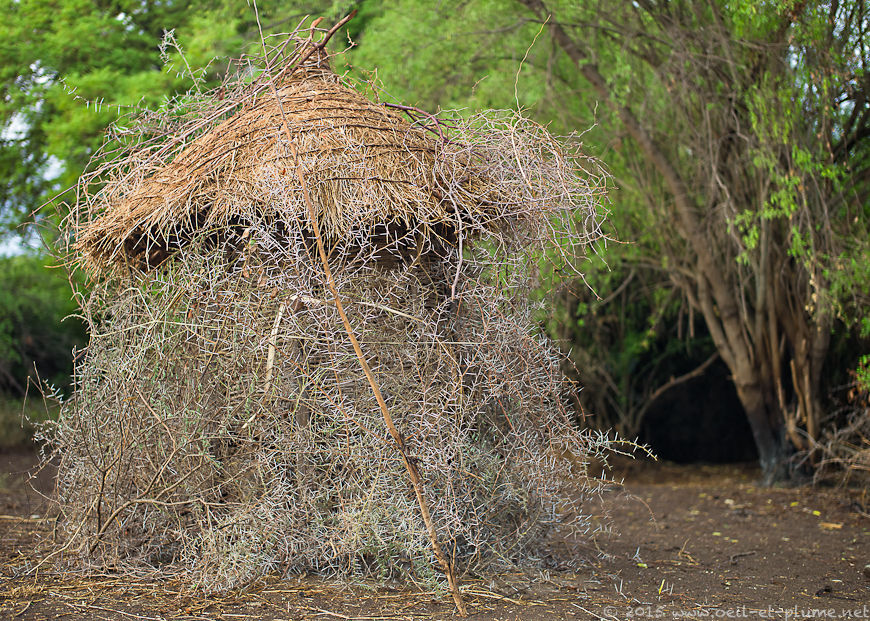 Karo crop safes are defended and secured as much as a central bank, but with natural means only. Thorny branches are disposed all around the larder to keep intruders away. Numerous baboons live on the riversides.

The night is approaching, pushing the last Karo farmers who don’t own any secondary hut in the farming areas to return to the village. African women are incredibly strong and resilient, as epitomized by this female farmer. 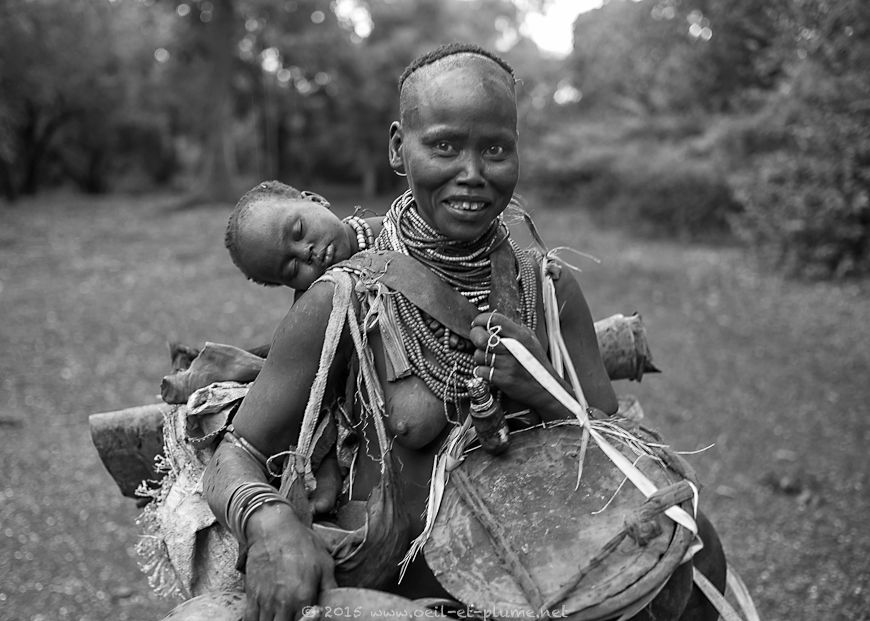 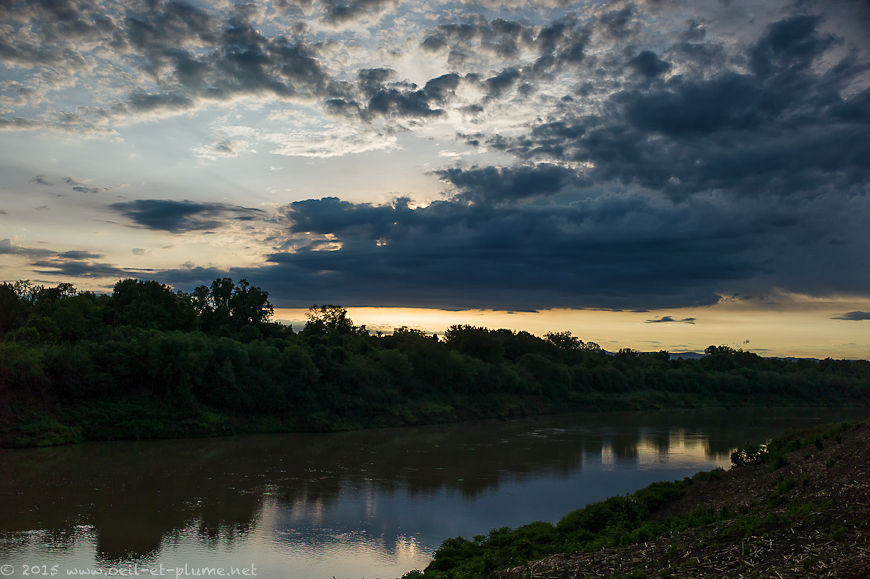 On the next morning, I get up at dawn to spot the Omo River. Again, the sky enchants my visual sense and my camera. On our way to the village, I spot fresh water tortoises and a couple of crocodiles swimming into the sleepy waters.

As a matter of fact, we pay first a visit to the village chief and main elders. One of them tours us from to one household to another. Unlike the Mursi settlement, the Karo village is quite large.

Historically, the Karo used to build superb traditional houses. After they lost much of their cattle and wealth, they adopted lighter conical huts similarly to other tribes living in Lower Omo River. 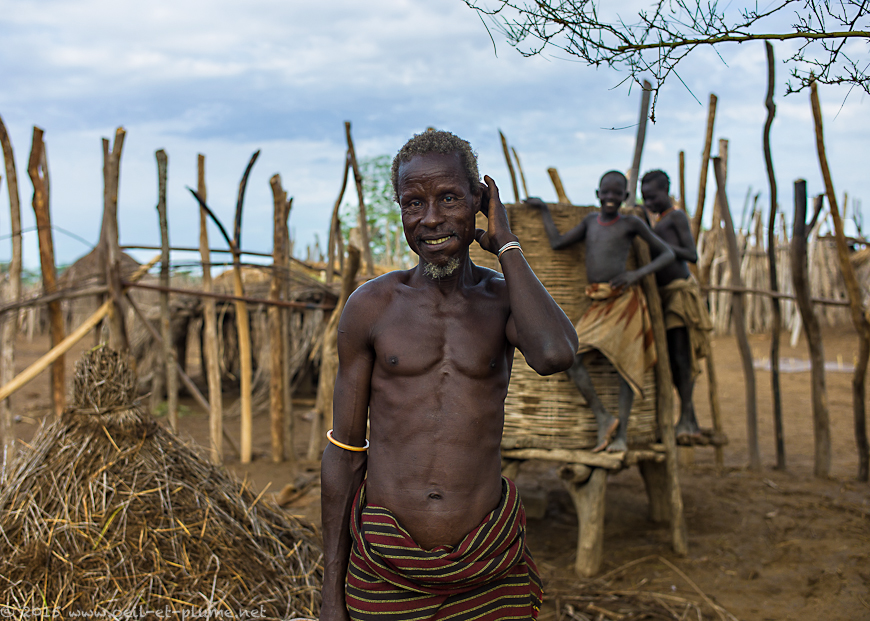 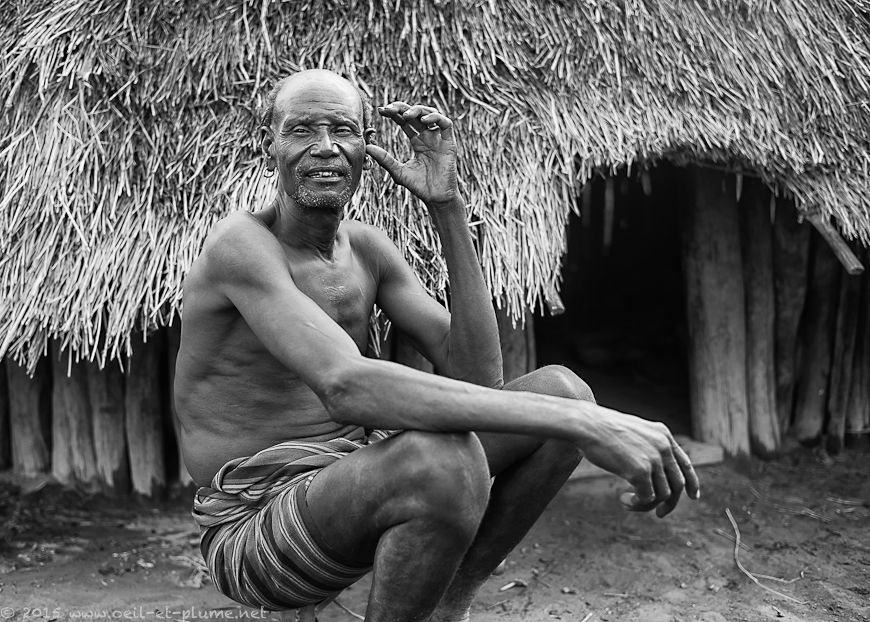 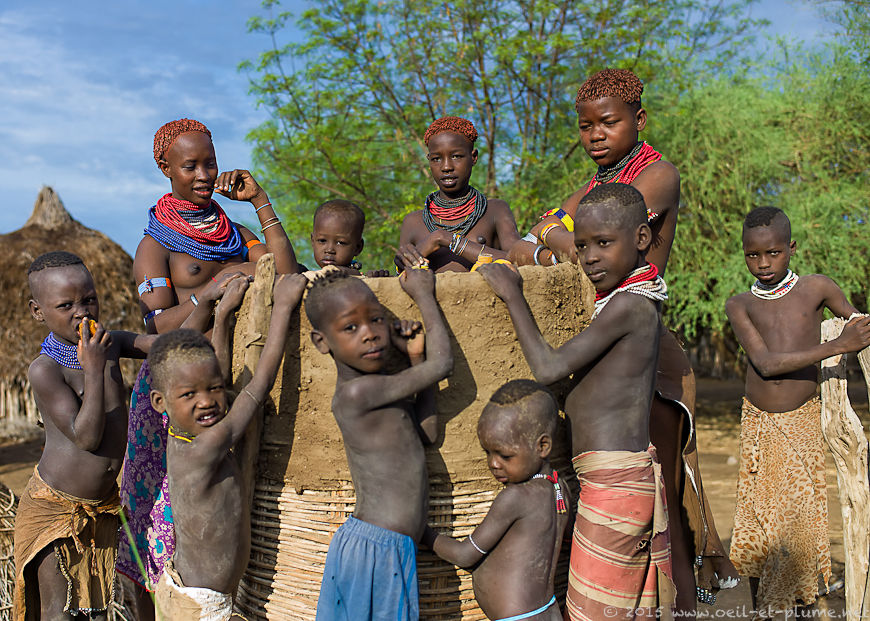 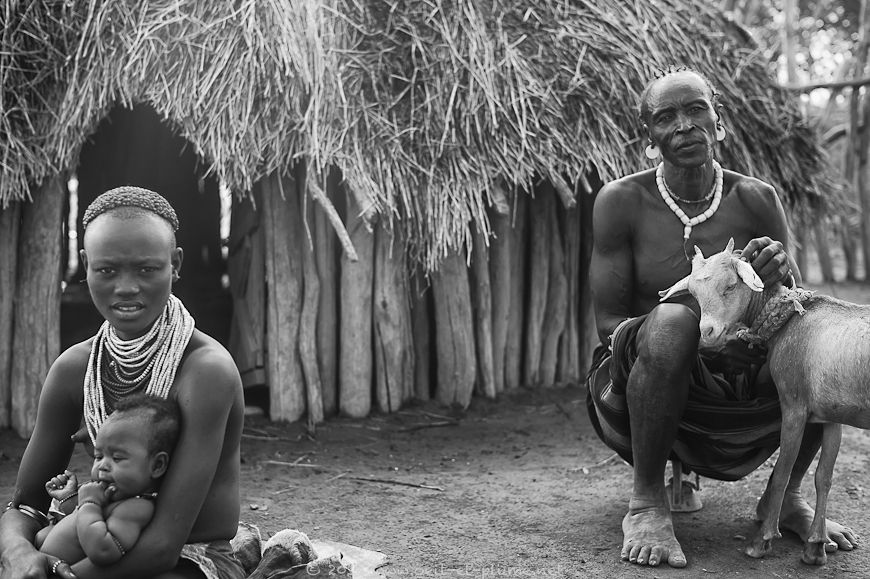 Traditional processing activities are being performed in the communal areas – food and cattle leather for instance. Karo farm also tobacco that they grow for chewing. 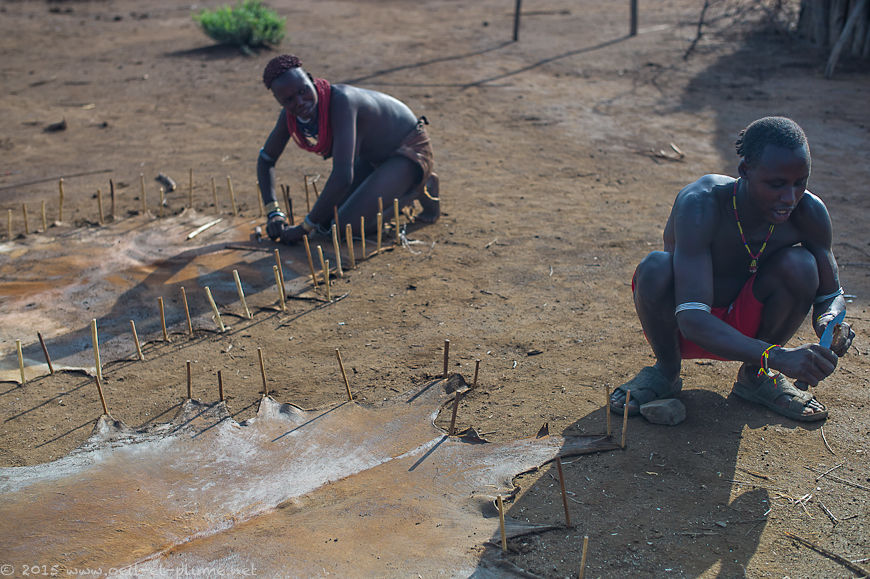 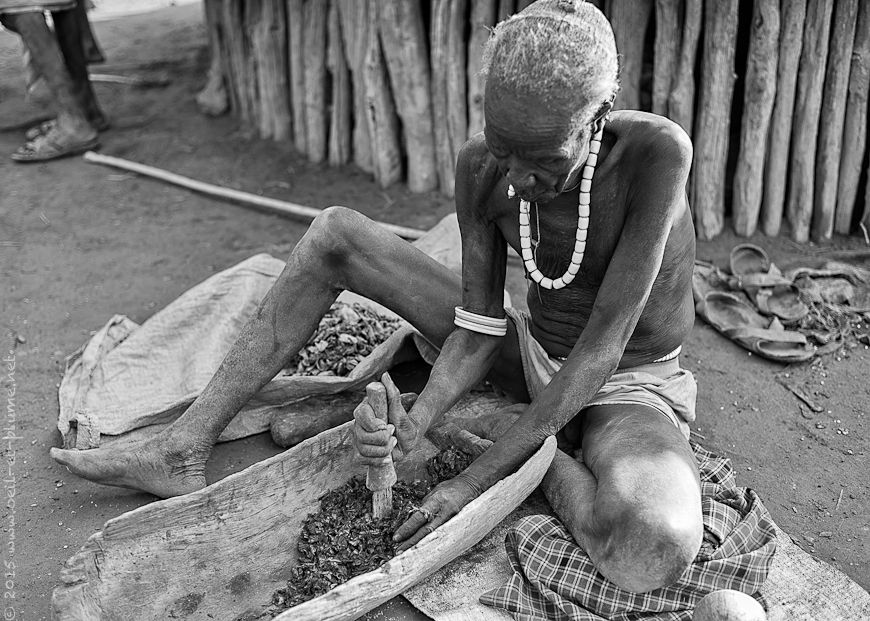 In a family compound, a venerable man wears a fascinating headgear. He is a ‘hero’, so named for his outstanding behaviour as warrior or hunter. Our man is a famous hunter. His coloured clay hair bun and his earrings symbolize his killing of dangerous wild animals. 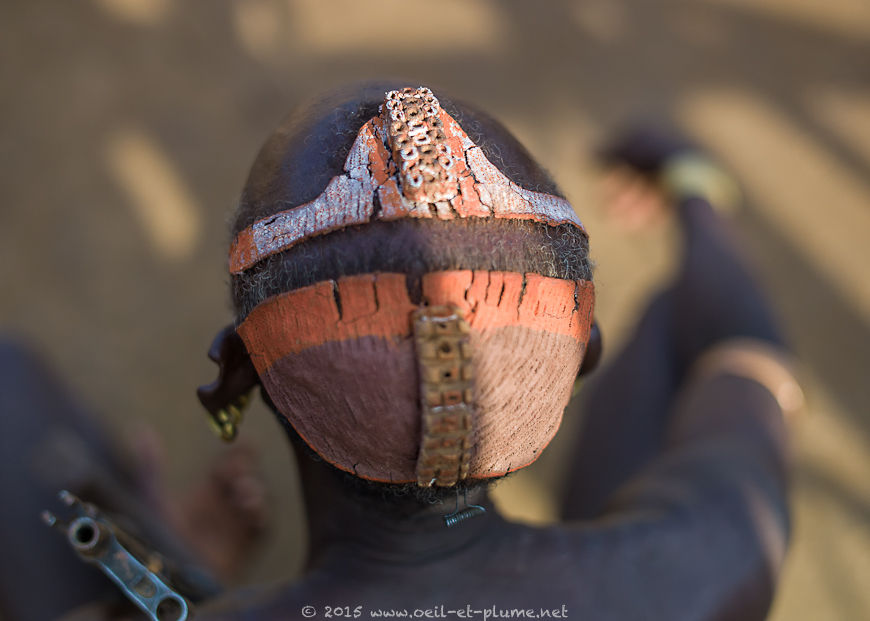 The news of our visit spread like fire in the village. After a while, young Karo males appear with beautiful body paintings. Although the practice is fairly common amongst the Omo River tribes, Karo are definitely the masters of body painting. 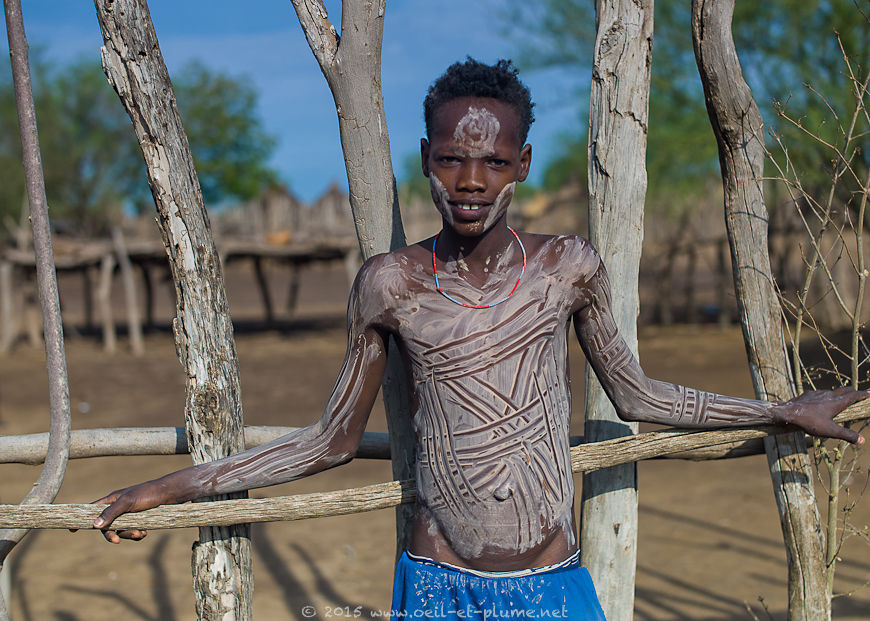 Karo males and females use body art and painting in a variety of circumstances. Body painting is inherent to their communal festivities and ceremonies. It is also used to boost their mutual attraction and their sex appeal. Last but not least, Karo males use body painting to intimidate enemies at war. 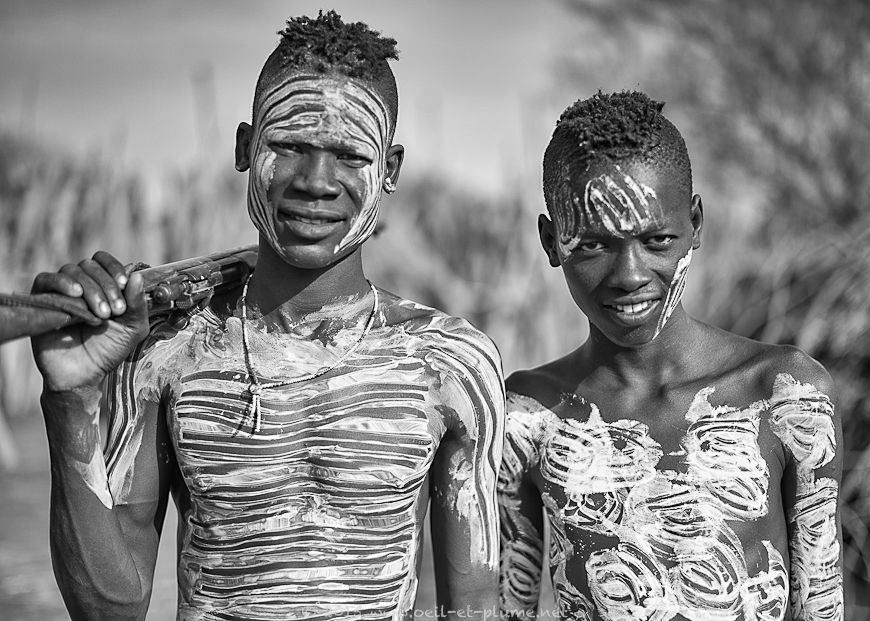 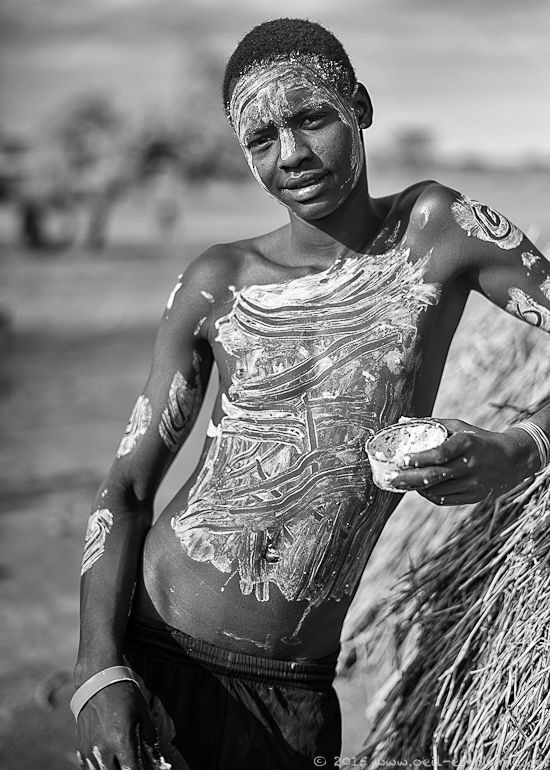 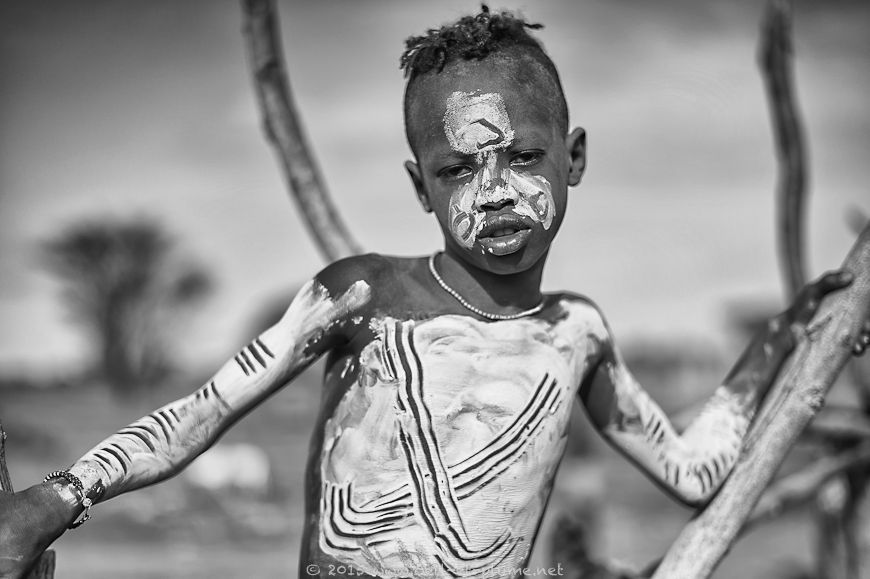 Karo people use natural pigments to create fascinating designs on their bodies and faces. White chalk is mixed with yellow rock, red iron ore and black charcoal. Palms or fingers are used to create intricate circle, spiral and cross-hatched patterns. They sometimes mimic the spotted plumage of a guinea-fowl. 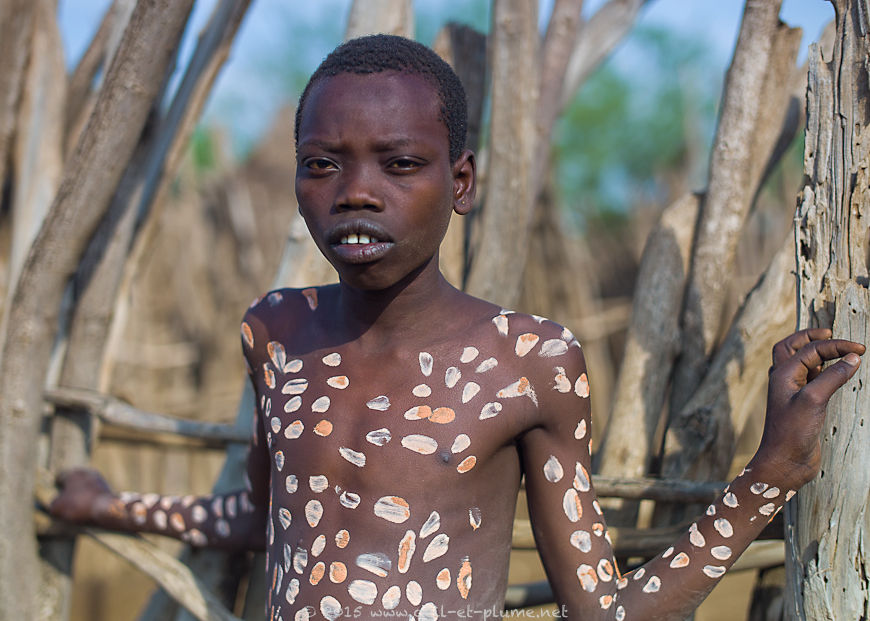 And what about Karo females? A beautiful woman approaches, exhibiting a twin ear of corn on her head. Maize is used as adornment headgear on certain ceremonies. 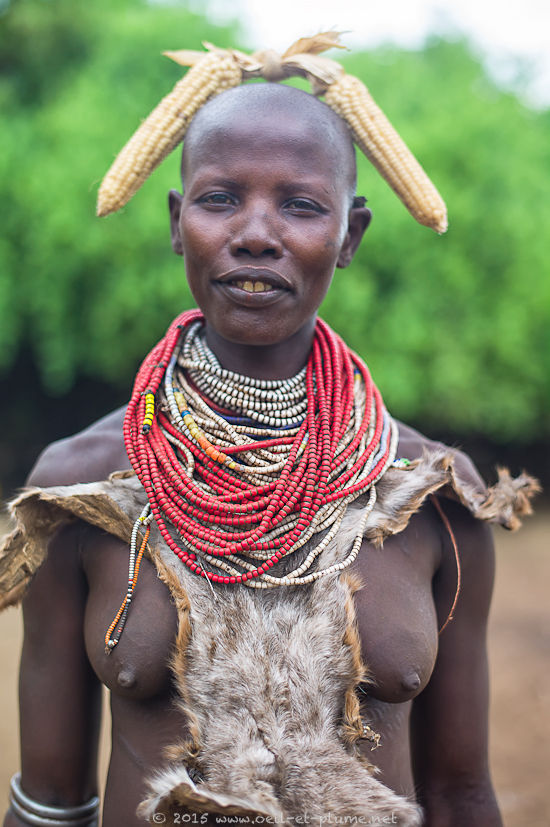 On a more everyday basis, Karo females use a wider variety of body beautification methods, from heavy and colourful necklaces to scarification. They often dress their hair with a mixture of red clay and butter. 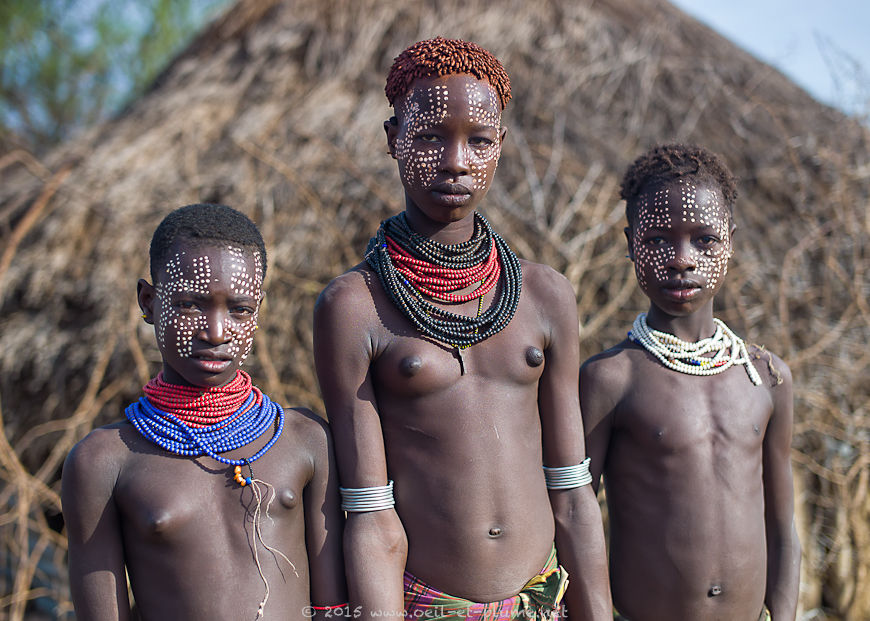 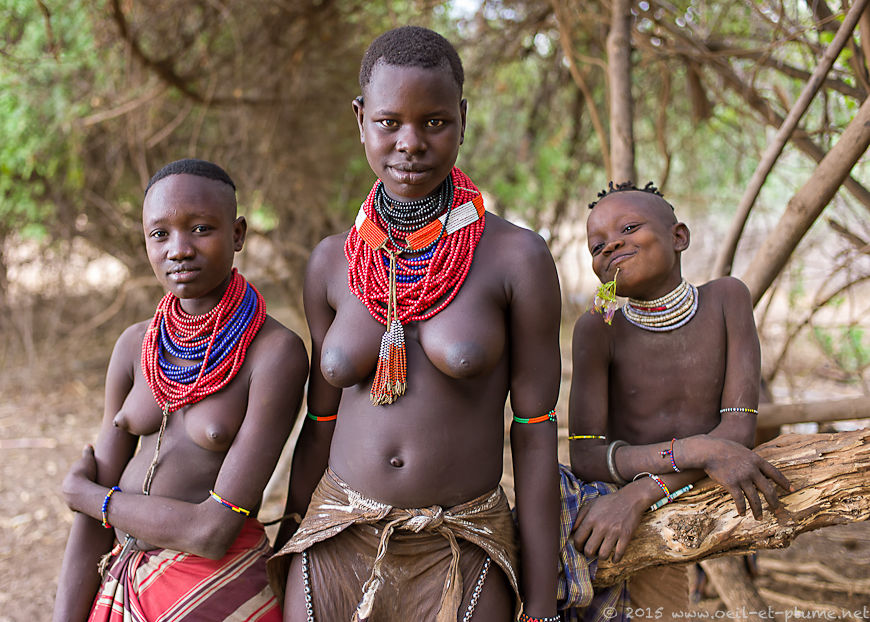 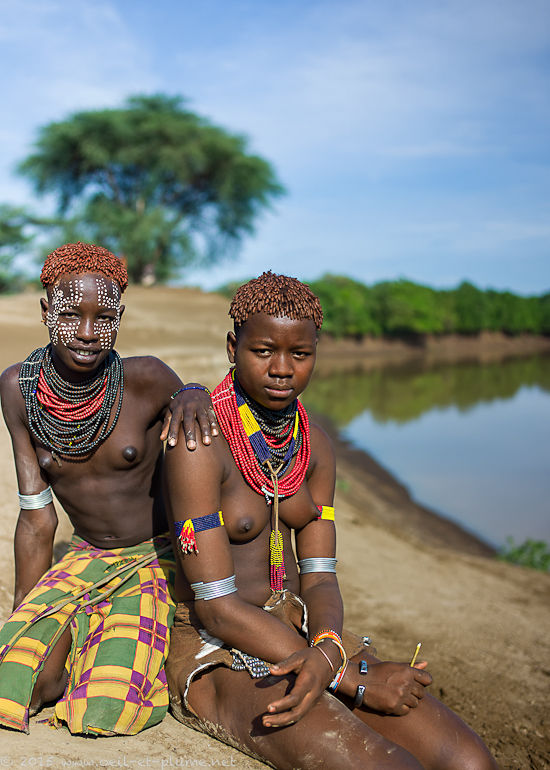 A brief encounter with two girls sitting on top of the Omo River bank concludes my glimpse of this fascinating tribal culture. I will keep in my mind and my heart the Karo master body painters.