‘If you lack time to visit more historical sites in Tigray mountains, make sure that you visit at least Debre Damo monastery and Abuna Yemata Guh church’.

I did follow the keen advisory provided by a seasoned traveller and professional photographer met somewhere in Ethiopia. And I am glad I did so. The two places constitute not only iconic Ethiopian Orthodox religious sites, but also awesome geographical locations.

I visit both places in a 13-hour return trip from Aksum. Tight schedule but quite feasible despite all claims heard before two days would be needed.

At the door of Eritrea, Tigray province displays beautiful rocky and dry landscapes, shaped by colourful mountain ranges overlooking vast arid plains. This is the natural décor to dozens of Ethiopian orthodox monasteries or churches built or hewn in the mineral heights – far from human evils and closer to God. Some of those religious sites are probably older than those of Lalibela.

Debre Damo refers not only to the famous monastery but also to the massive mountain topped by a vast and trapezoidal plateau hosting the religious complex. 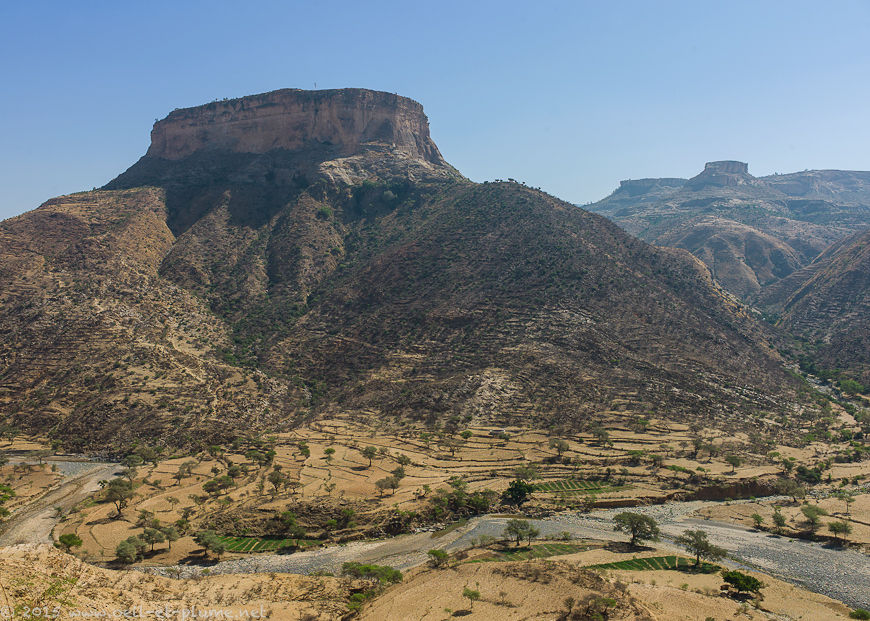 Ethiopian Orthodox tradition has it that Abuna Aregawi founds Debre Damo monastery in the 6th century. Along with 8 monks, the Syrian monk takes refuge at the Aksumite royal court in Aksum to escape persecution in the Roman Empire. Revered by the Ethiopian Orthodox Church, the nine Saints proselytise Christian faith across the Aksumite Kingdom in the following years.

After 12 years spent in Aksum’s royal court, Abuna Aregawi endeavours to build a major monastery on the top of Debre Damo, commissioned by the Aksumite king Gebre Mesqel. Legend has it that God provides him a giant snake to help him climbing the mountain. 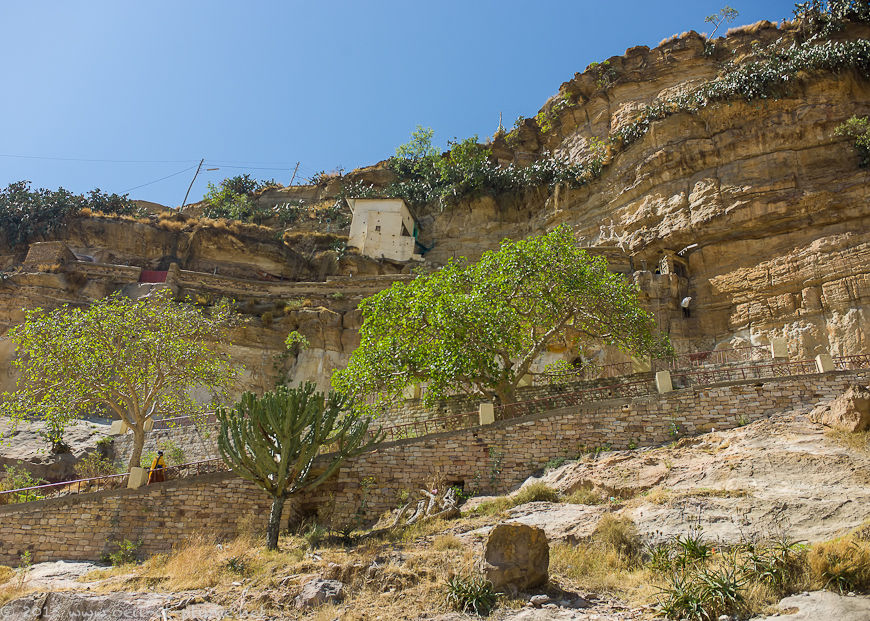 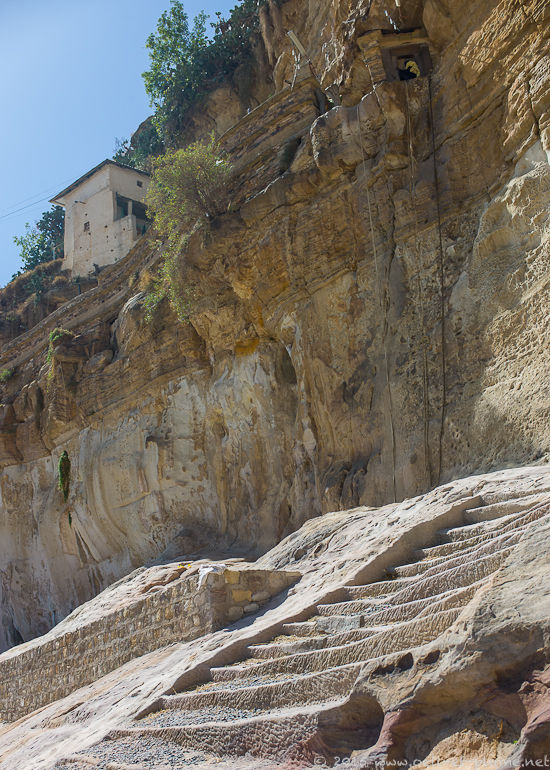 I was not provided such special service. I am to climb the sheer cliff with the help of ox leather ropes. With one rope circling my waist, I grab the main rope made of large and braided leather lashes. The 20-meter ascent is quick and smooth, secured and boosted by the energetic pull of a young monk. 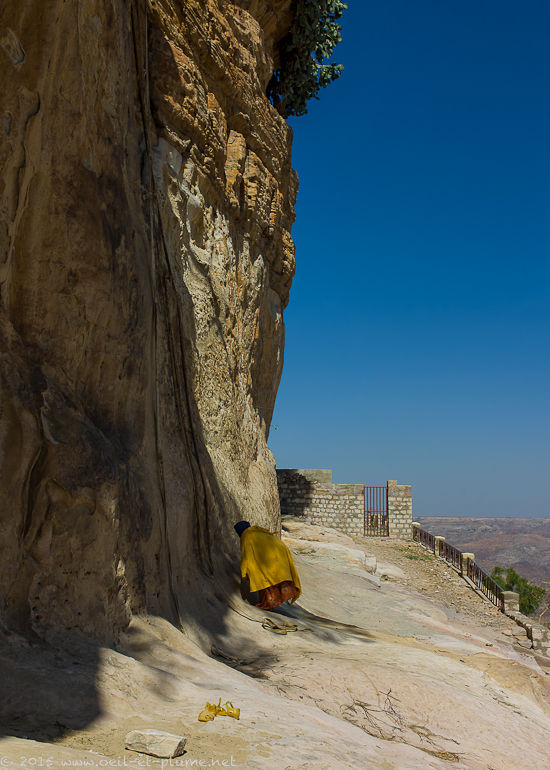 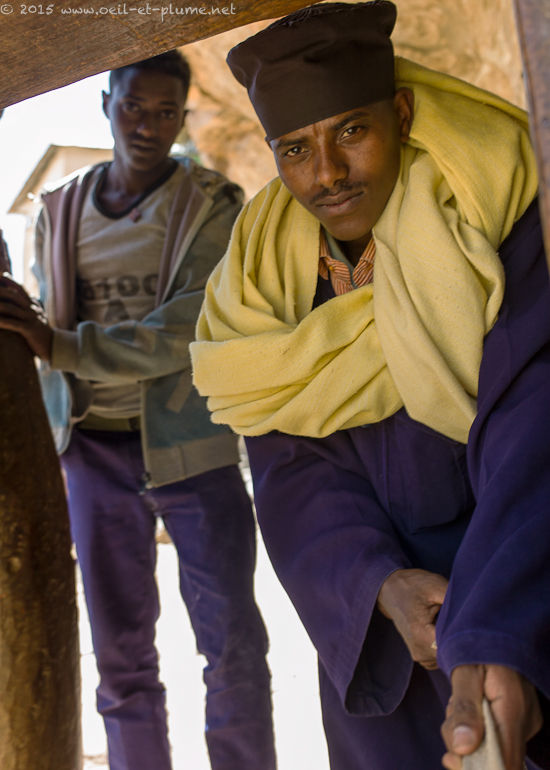 Here I am! My security and welcome officer adds a guide hat to escort me across the religious site. The mountain plateau is quite wide, about 1,000 by 400 meters in dimensions. We visit only a small fraction of the area. 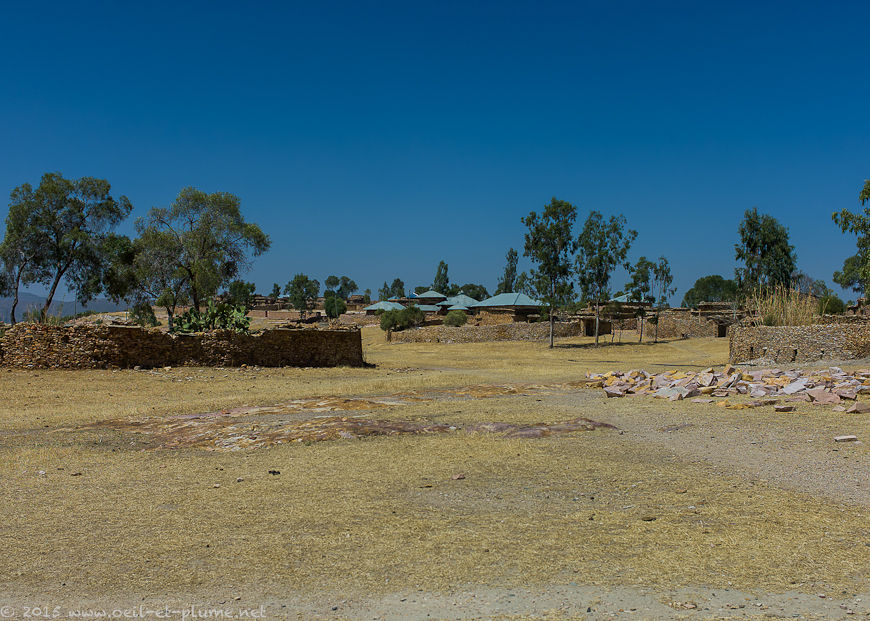 Our conversation flows despite of some hiccups. My guide comments:

– No, no, no! Ethiopian Orthodox monks and priests are not allowed to practice sport activities. We are here to pray.

– Sorry, I was just translating the fact that Roman Catholic priests and monks are entitled to practice sports.

– Women are also not authorised over here, to avoid distracting priests and monks.

– Priests can marry, but they cannot stay here with their families. In turn, monks cannot marry since they are devoted to prayer.

I nod to conclude while we reach the church.

The 6th-century Debre Damo church is reputedly the oldest existing church in Ethiopia that still displays its original style. The monastery is also famous for its collection of manuscripts. 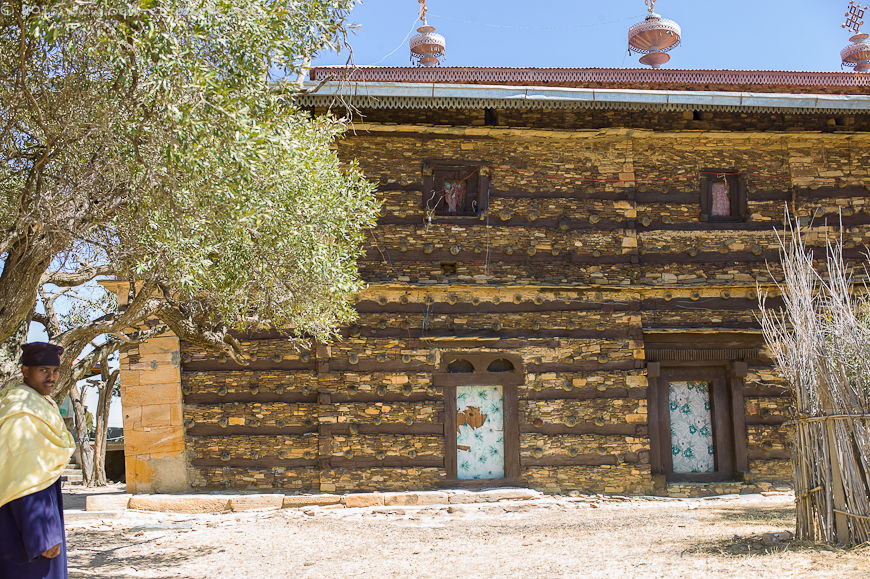 In 10th century, the monastery is attacked and destroyed by forces led by the Queen Judith who aim at imposing the Jewish rule over the Aksumite Kingdom. At that time, the religious site keeps many treasury items of the Aksum’s rulers. I wonder what remains nowadays in Debre Damo from the initial period ranging from 6th to 10th centuries.

Common visitors like me have no chance to look at Debre Damo’s venerable manuscripts. Nor am I authorised to access to the main room of the beautiful church building. Never mind, the exterior of the building is beautiful. I manage to visit the narthex as well. The dark antechamber unveils its interior to my eyes. 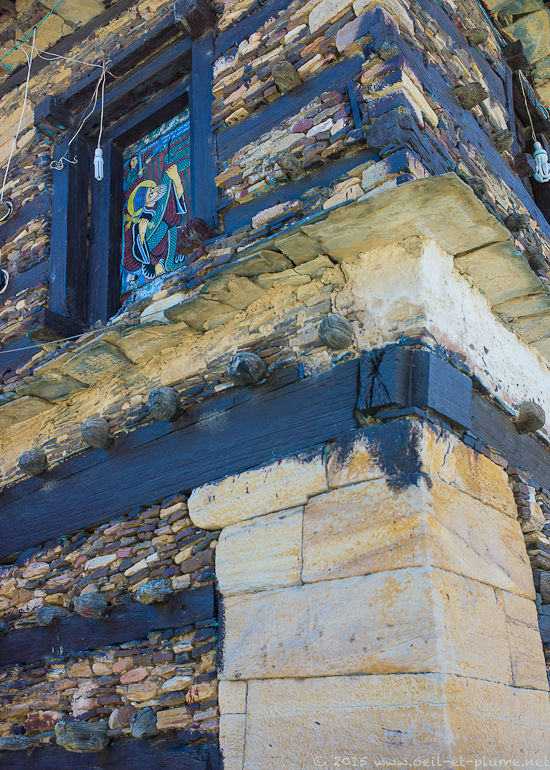 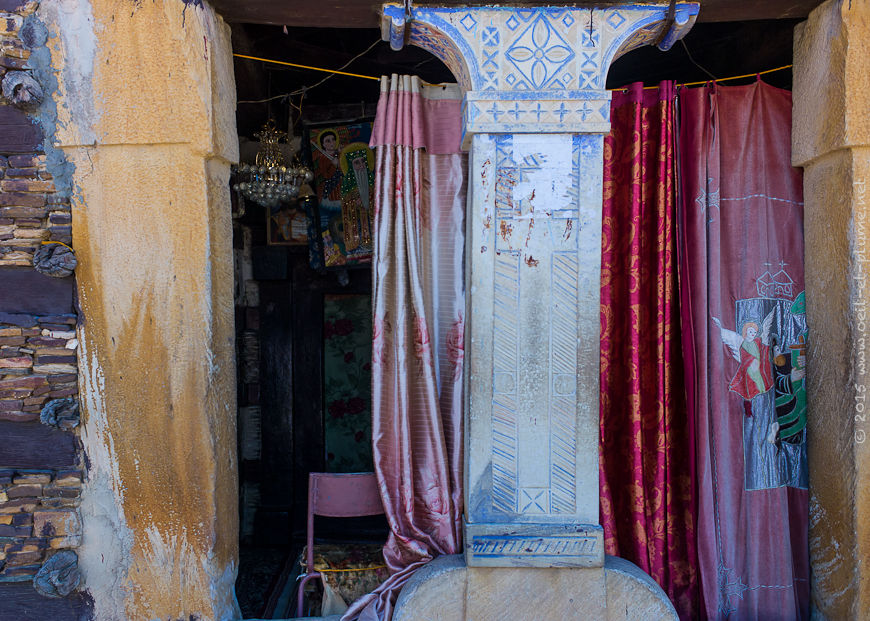 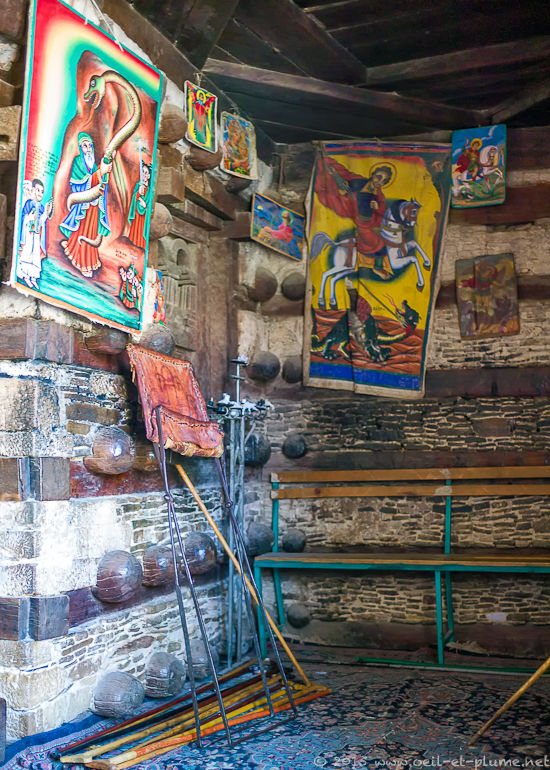 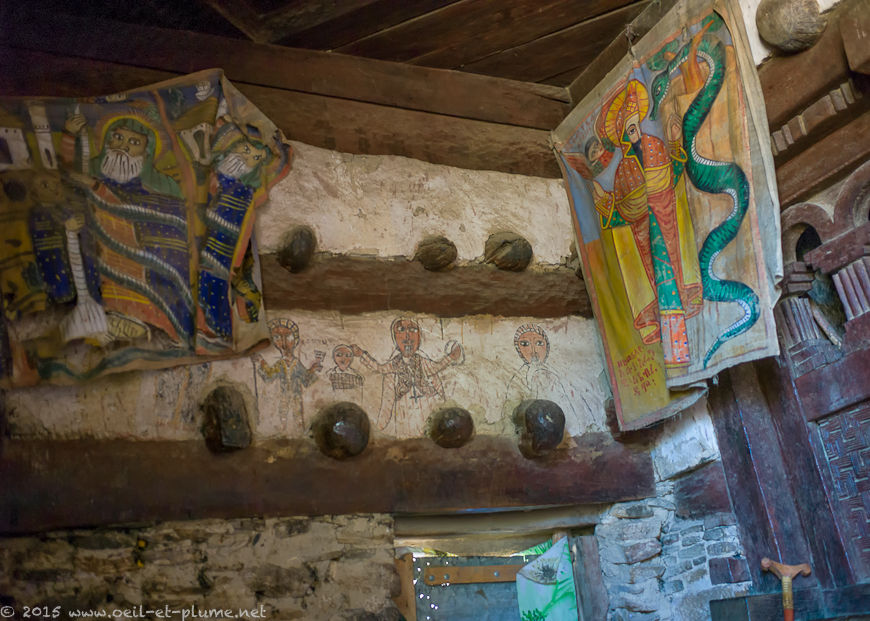 I love the wall structure alternating layers of limestones with wooden beams. The beam heads correspond to the dot lines carved in Aksum’s stone stelae to represent the building floors. The harmonious mixture of limestone and wood is a key tenet of Aksumite antique architectural style.

It is already time for me to return to the antique rope lift. I wish I could stay a couple of hours here. My guide leaves his religiosity aside to bargain a generous tip. Praying seems to be so expensive… 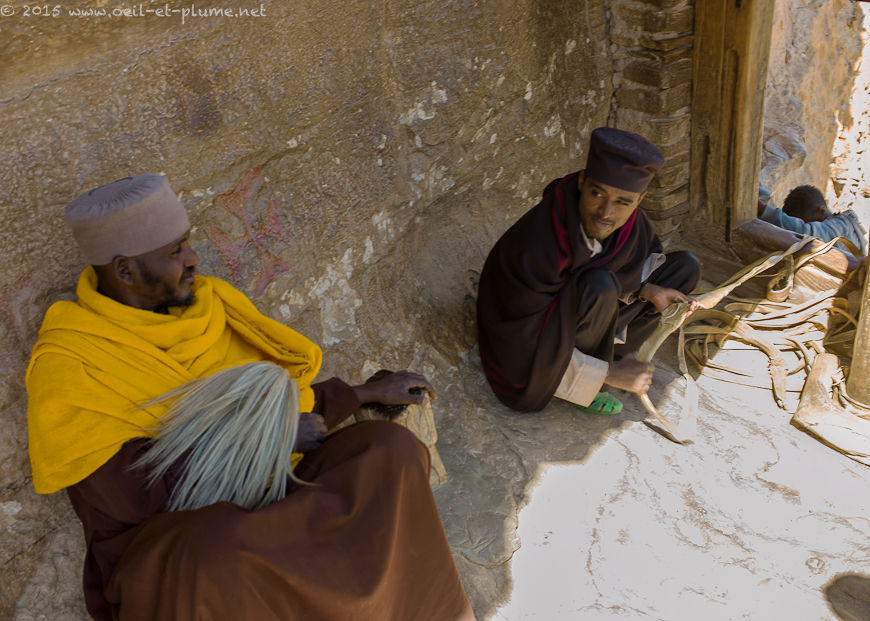 Never mind. I agree that the young monk needs material and financial forces to foster his faith. More immediately, my life depends also on him until I touch ground at the bottom of the cliff. 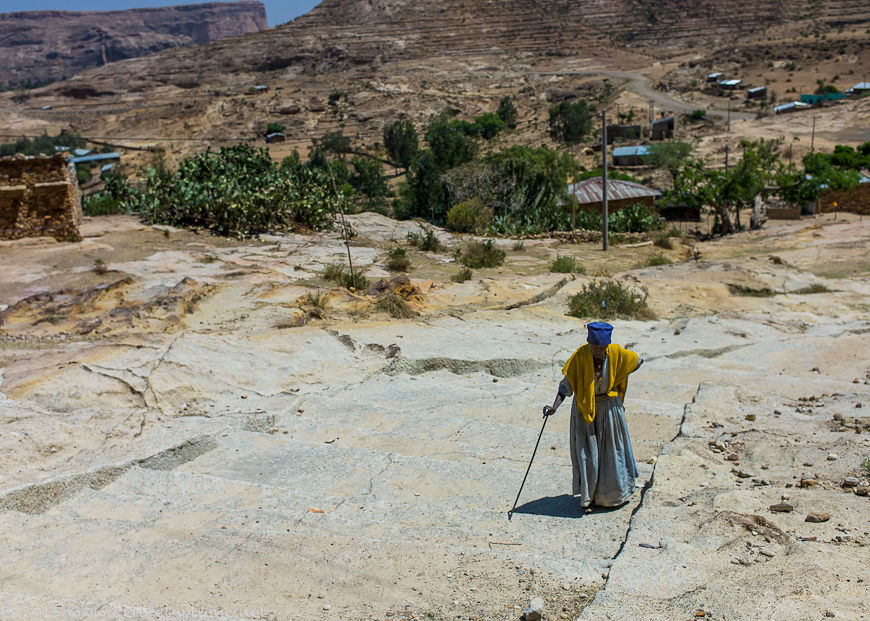 On the walk back to my car, I cross an old female monk, bent on her cross and walking stick. She is not to climb the sheer cliff indeed, but intends to trek the long and strenuous stairway in order to kiss the mineral wall. Amazing faith, I conclude.

Another of the Nine Saints, named Abuna Yemata, is credited of the foundation of the second church of my Tigray journey, whose access is also quite challenging. Beyond this double communality, Debre Damo and Abuna Yemata share quite a number of differences. 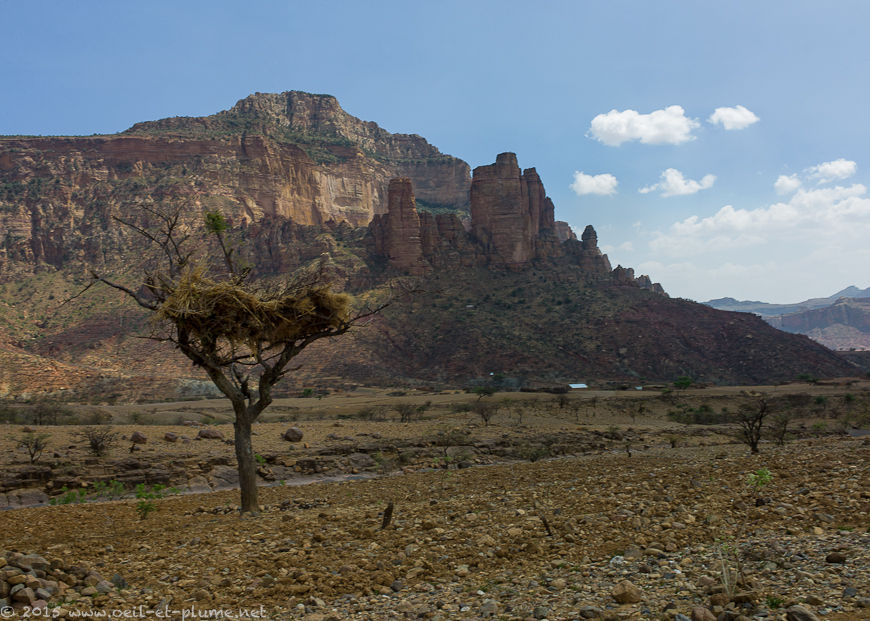 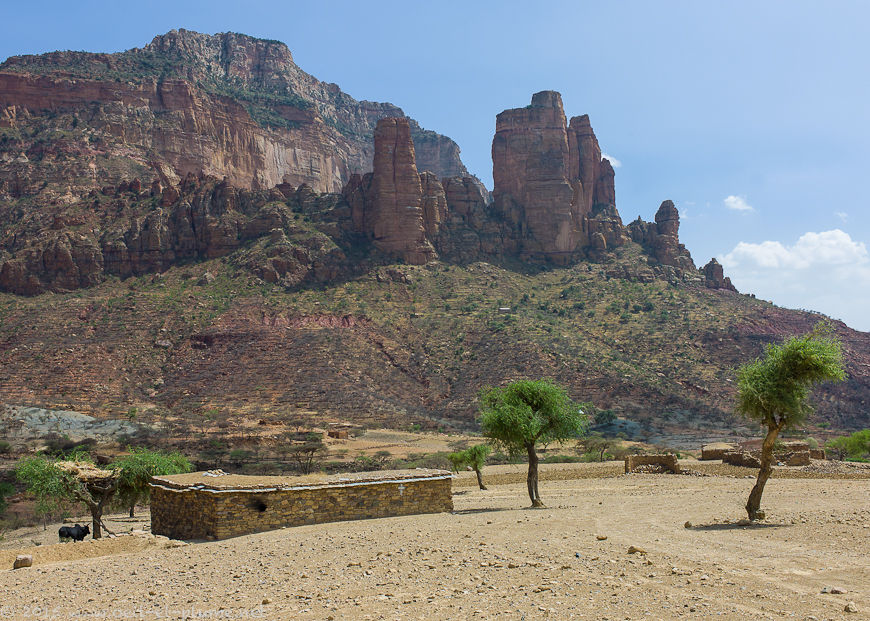 The Abuna Yemata sanctuary is carved at about one-third of a 650-meter high spire of rock – in the backside of the main rock on the picture above. Access to the church requires ascending the frontal slope and cliff before the pass, from where the path turns around the spire counter-clock wise until the man-made cave.

Access to Abuna Yemata Guh is by far more challenging than in Debre Damo: long approach walk, steep trek up to the spire basis, followed by a short but challenging rock climbing.

Prior to leaving the car, I am explained roughly the itinerary by my driver. On my trek to the spire bottom, I manage to discard the various guiding offers formulated by local villagers. A local man rushes after me to request the admission fee, followed by the local priest. Holder of the church key, he will guide me to the sanctuary. A local scout joins us in our ascent to the spire bottom. He is officially tasked to assist the visitor in the climbing. We stop a few minutes at the bottom of a sheer rock. I look for our way, in vain.

All of the sudden, the priest stands up and indicates the vertical wall: this is the way forward. He requests me to remove my sport shoes. The rest of the ascent is to be made barefoot as the rock above us is holy. The young priest climbs the mineral wall with an unbelievable agility and celerity. 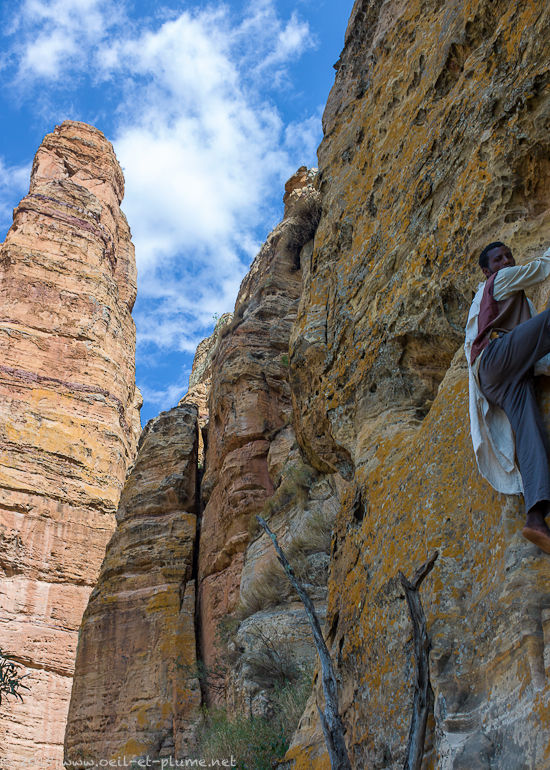 Taking the best stock of my mountaineering experience, I read the wall to look for my way. Yes: here and there, then further up and right. Let’s go. I ascend slowly but decently despite my backpack and my camera system. I feel tense since I am not used to free climb.

Knowing obviously the way by heart, the scout advises me on the sequence of my movements. I listened to him only partially because, hard-minded, I like also to find my own way up.

The main rock wall is now below us. A small ledge provides a venue for a break. Down into the valley, the villages seem already far away. A double stone hung at a wooden branch constitute the church bells. 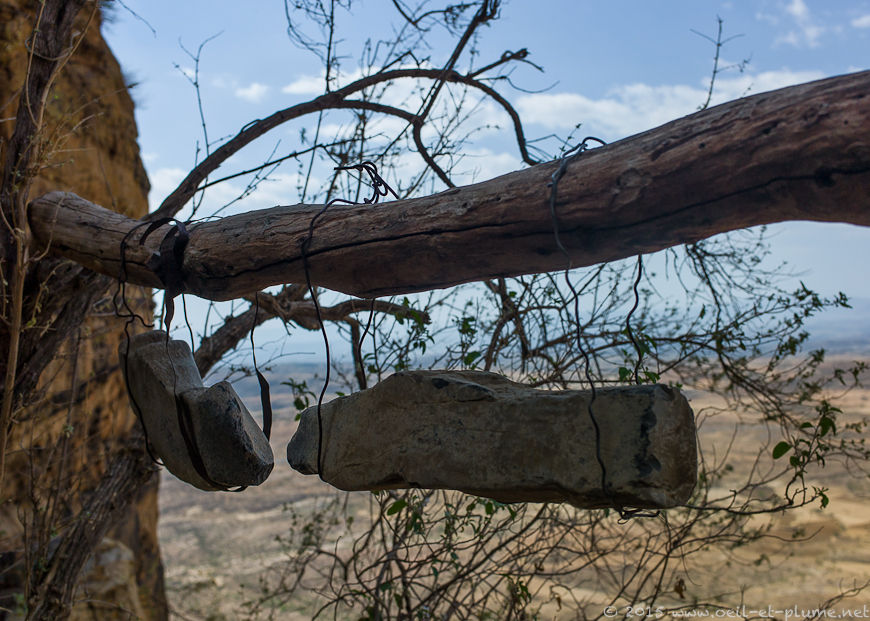 Yes, devotees attend a weekly religious service on Sundays. Young, old, strong and weak villagers climb up here weekly, including women with their small babies on their back.

We reach a ledge where the panorama of the backside of the mountain opens up. Some skulls and bones are buried in a small cave. A bit higher starts a playground for funambulists. We walk along a narrow natural ledge, with a 200-metre vertical drop under our feet on our left hand-side. The moment is scenic and full of emotions. I enjoy every step made until the church entrance. 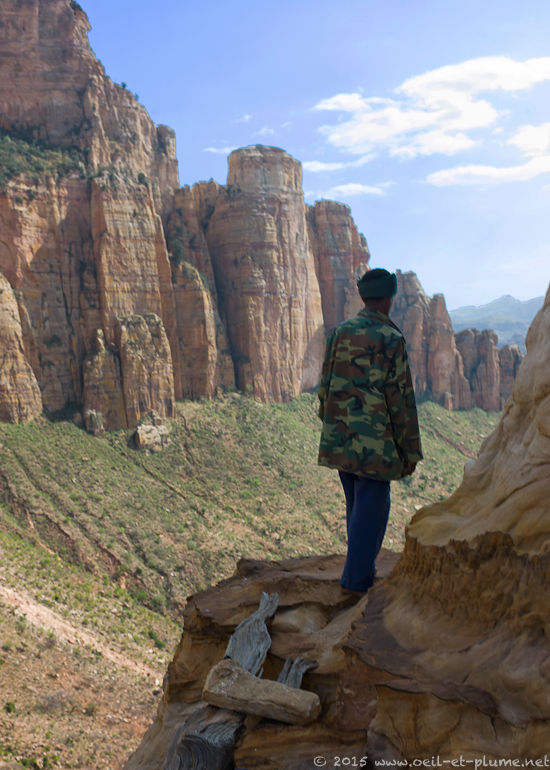 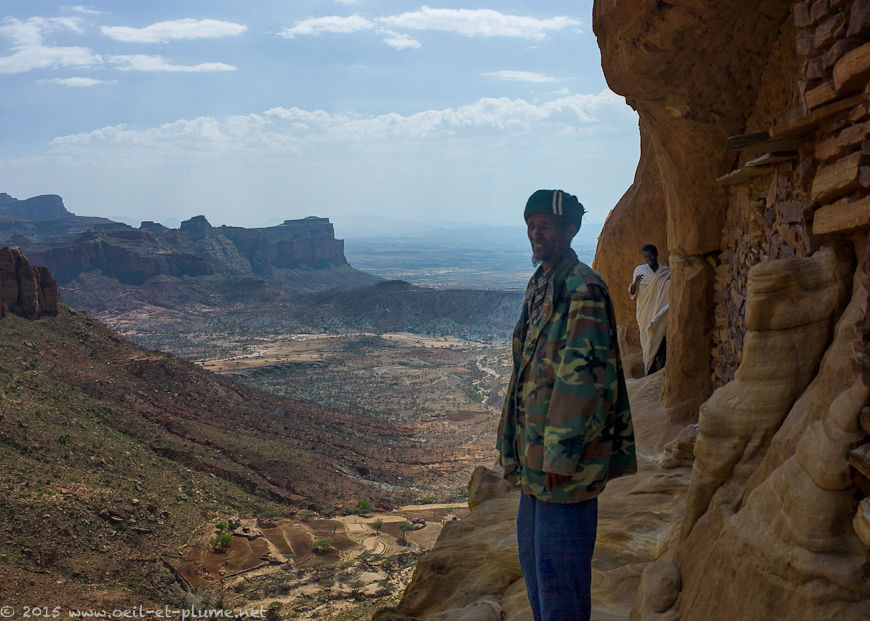 The priest opens the old wooden door and invites me to enter. A burst of delicate and colourful paintings emerges gradually from the darkness. Although only 20-25 m2 large, the hewn church constitutes a major piece of Orthodox religious architecture. 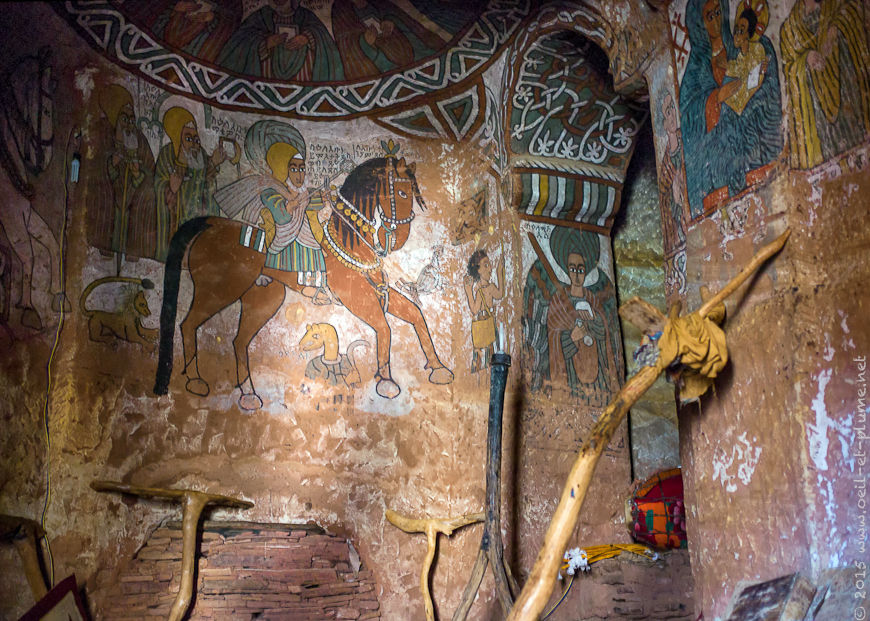 The Syrian monk Abuna Yemata is there, riding proudly his horse. The walls and the ceilings depict major figures of Old and New Testament. In the cupolas throne nine of the apostles as well as the Nine Saints who came from Syria. 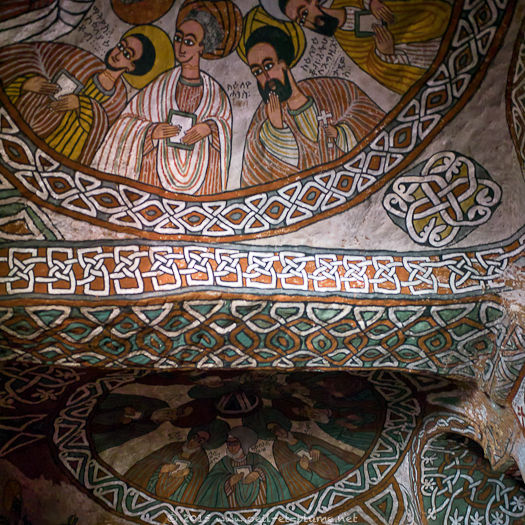 According to the priest, the frescoes were never restored as they are made of natural pigments well conserved by the local dry atmosphere of the mountain cave. 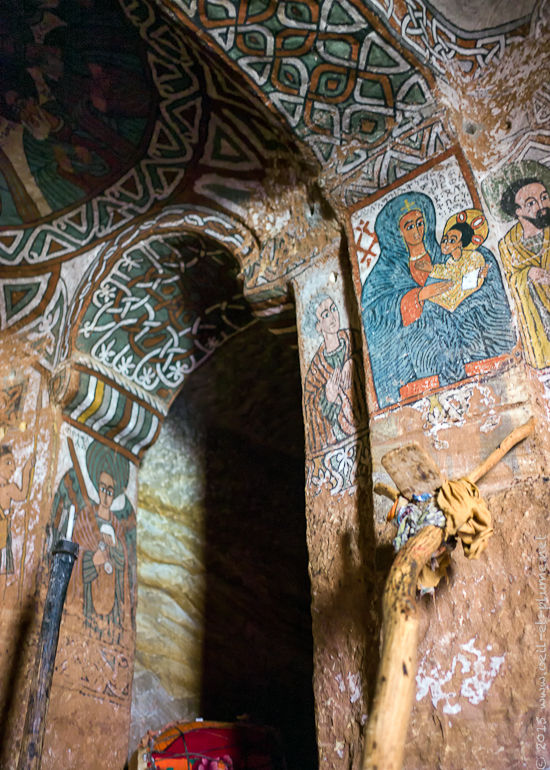 In the discussion, the priest exhibits a large and hefty religious book out of its leather cover: ‘The history of Abuna Yemata church written in ge’ez language on goat skin’, he comments proudly. 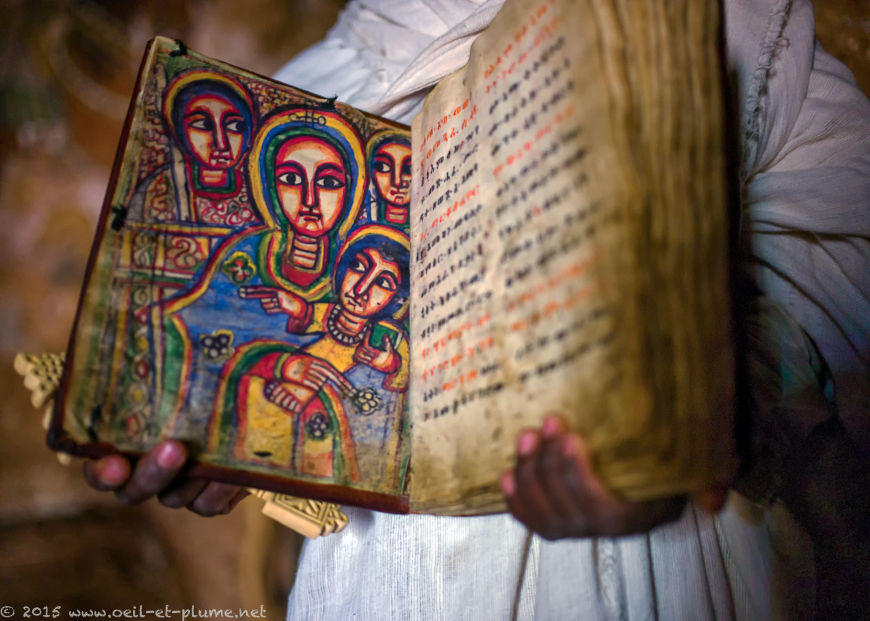 Ge’ez is an ancient Semitic language born in Ethiopia and Eritrea that was adopted as the official language of the Aksumite Kingdom. Today, ge’ez remains as the main liturgical language for the Ethiopian Orthodox Church.

‘Nights must be awesome here, I presume’. The priest confirms, as he spends one night weekly in a nearby cave next to the church to prepare the religious service on Sundays.

My feet and hands only adversely touch base again with the rock outside the church. As always in mountains, descent is more challenging than ascent.

My scout forces me to climb down facing the height – an infringement to a basic rule of alpinism. Then comes the main rock wall. Thanks to the scout’s advisory, I manage to reach the bottom with no particular problem. 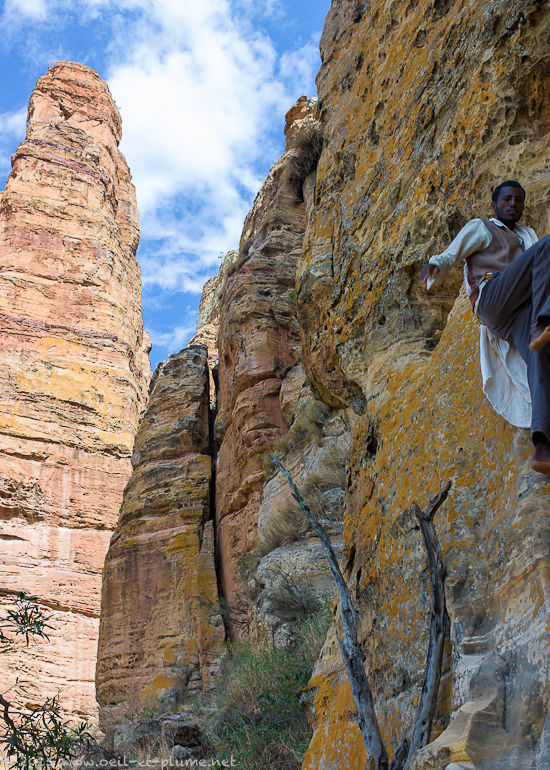 The priest follows, even lighter in style than during the ascent. I try to convince myself that his religious faith facilitates his climbing and prevents him from falling. Yes, it must be.

Back to earth and to my shoes, I run down the slope to trek back to my vehicle. ‘One hour and half’, states my driver. ‘That is a good timing. Some visitors take up to three hours and half, while others turn back before reaching the church.’

A visit to Abuna Yemata Guh church is by no mean just a sport performance. Nor it is a religious pilgrimage for Ethiopian Orthodox people only. It is a multi-faceted spiritual, physical, life and travel experience.

The challenging access to Abuna Yemata Guh church only adds to the stunning beauty of the surrounding landscape and to the awesome realisation of courageous and skilled devotees. It will hopefully preserve the religious site from mass tourism. 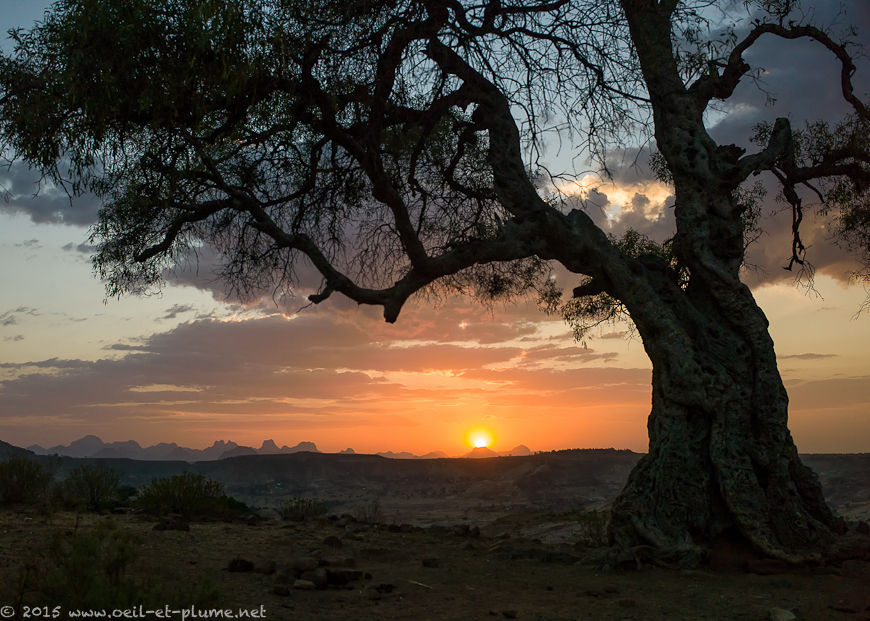 Tigray region in northern Ethiopia is far richer than the two architectural gems presented above. One day, one week, one month even, are not enough to pay a decent tribute to its charm.

Nevertheless, I am leaving now Tigray region for Omo Valley in southern Ethiopia.