You are certainly curious to know about the current location of the Ark of Covenant that disappeared from the Temple of Solomon in Jerusalem in the 6th century BCE. You were also wondering where the legendary Queen of Sheba has lived and ruled. Both questions are hotly debated amongst theologists, historians and archaeologists. According to Ethiopian tradition, Aksum is the definitive answer to both queries.

Today’s Aksum (also named Axum) is a rather small town in Tigray province in northern Ethiopia. However and in addition to the two elements above, Aksum bears another key historical legacy. It was the capital town of the Kingdom of Aksum that prospers from the 2nd century CE to collapse eight centuries later. At his apex in the 4th century CE, the Aksum Kingdom rules not only northern Ethiopia and Eritrea, but also northern Sudan, southern Egypt, Djibouti, western Yemen and southern Saudi Arabia.

The Aksumite Kingdom draws its economic wealth and political power upon international trade. It is instrumental in the commerce of luxury goods – e.g. ivory, gold, gems, silk, spices – between Africa, India, the Arabic peninsula and the Mediterranean basin thanks to its privileged access to the Upper Nile and to the Red Sea.

The Aksumites practice a mixture of polytheist and Judaic religious beliefs until their Kink Ezana adopts Christianity in the 4th century CE. In pre-Christian times, they erect scores of large stone stelae for religious purpose. Today’s Aksum still displays a number of them in various locations.

I visit Aksum’s main stelae field on one early morning, enjoying the historical site free of any other visitor. 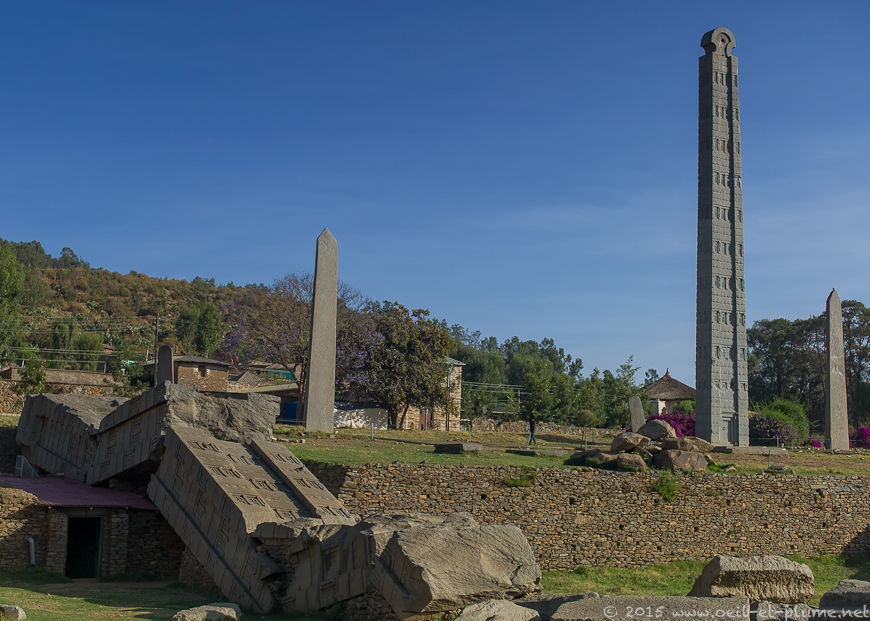 The stone towers served to mark graves for the Aksum ruling elite until the 4th century CE. The most elaborated ones represent superb multi-storied palaces, decorated with false doors and windows and topped with a semi-circular part. The monumental stones bear often a sign of the king’s or the noble’s rank.

Stabilized by underground counter-weights, they stand above underground burial chambers. Little is known about Aksumites’ burial practices as most of these high-profile tombs have been pillaged.

The highest standing stele in Aksum is the famous Obelisk of Axum – a 24-metre tall monolith weighing 160 tonnes. Taken to Rom as war bounty by Italian troops in 1937, it was finally returned to Ethiopia in 2005 and re-installed in Axum in 2008.

I feel much attracted by the Great Stele – 33 meters high or long since it is nowadays lying on the ground broken in five pieces. The finesse of the stone cutting and carving is simply stunning. I try to imagine the logistical challenges to transport a 520-ton monolith over several kilometres from its quarry mine to its erection site. 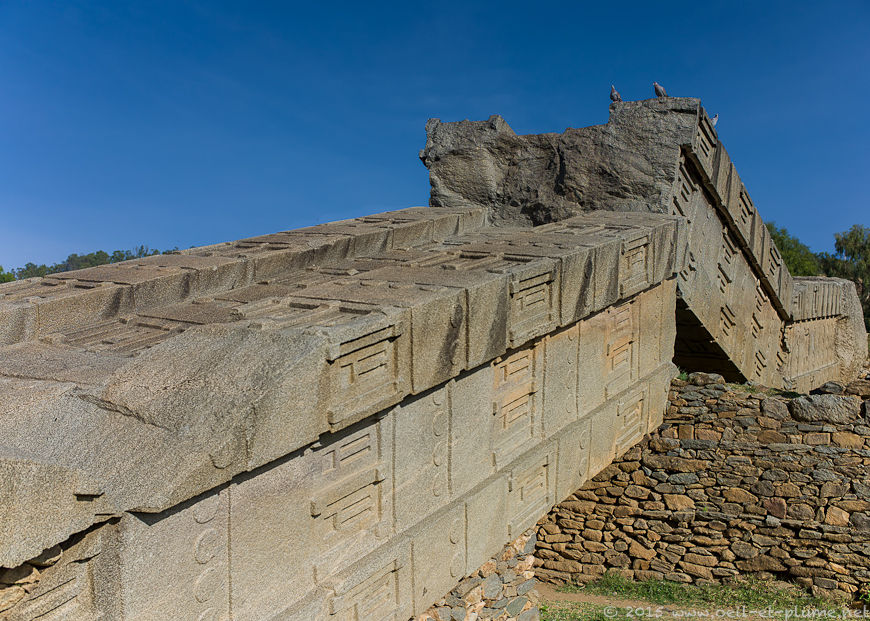 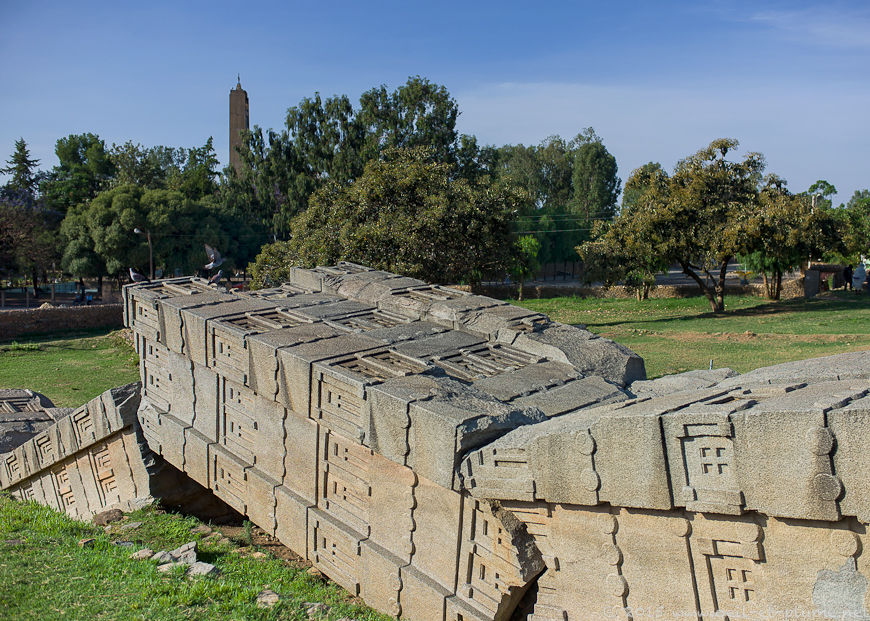 The Great Stele is thought to have fallen at the time of its erection some 1,700 years ago. Beyond technical considerations, there is much human vanity in this failed attempt to erect the tallest monolith on Earth. The incident marks also the end of the building of Aksumite stelae and the beginning of the long decline of the Aksumite Kingdom.

The main stelae field in Aksum comprises a number of raw pieces either standing or fallen.  There are hundreds of smaller ones in various locations, and probably additional hundreds still lying underground. 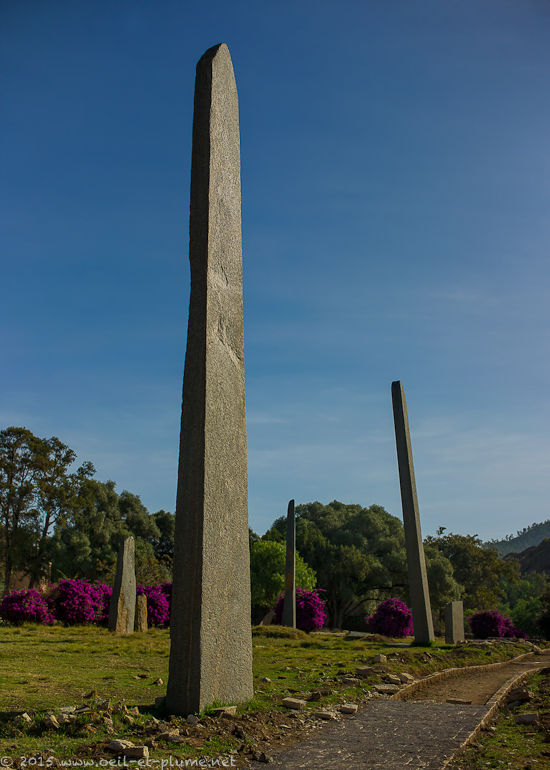 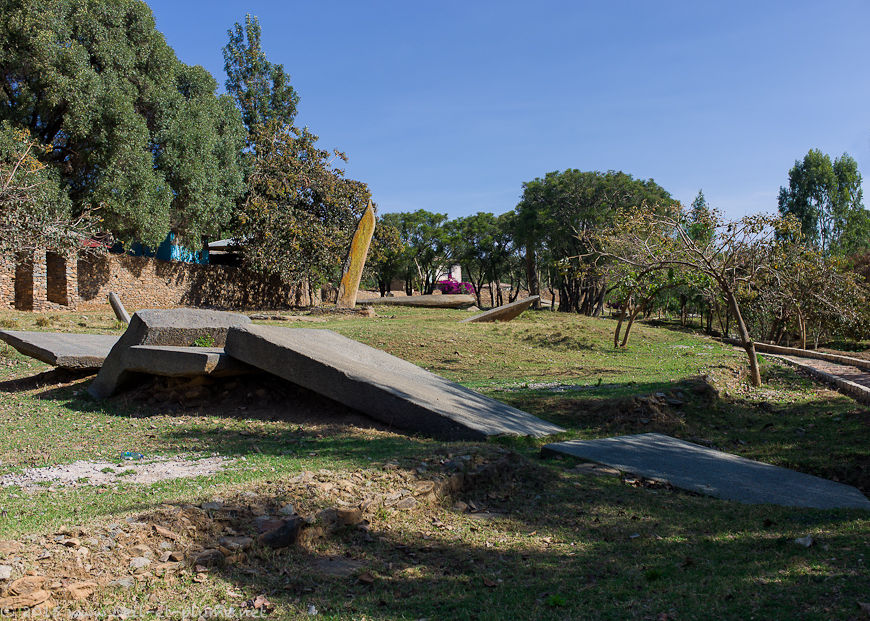 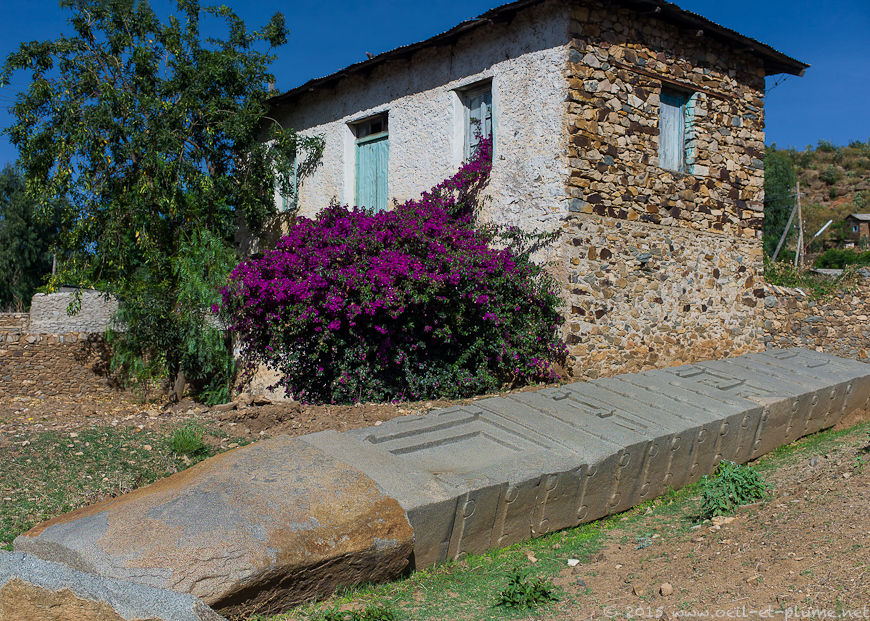 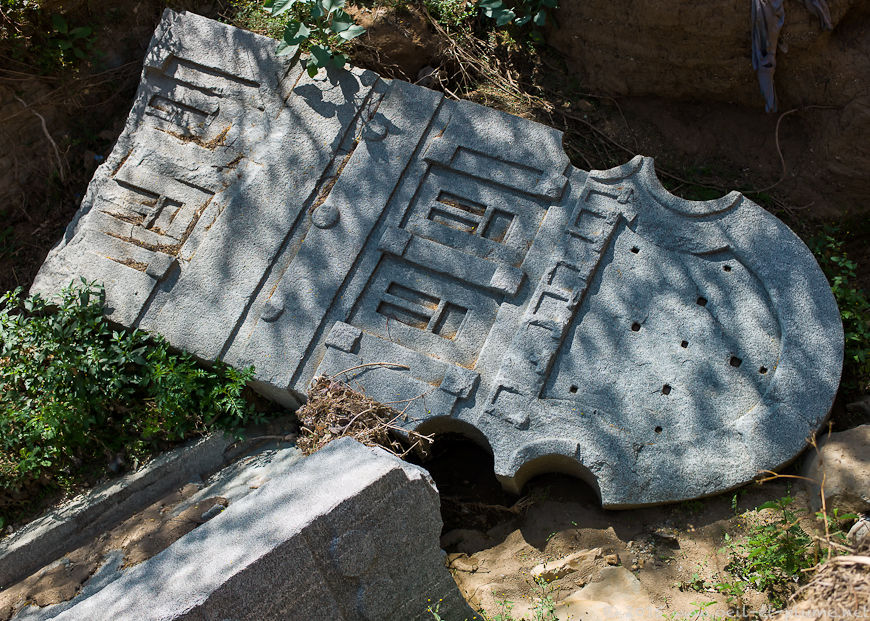 Queen of Sheba and Ark of Covenant

Next to the main stelae field, the Queen of Sheba’s Bath looks more like a modern pond and pool than an historical place. For sure, it is a very ancient rock-hewn water reservoir. Although there is not much historical evidence to suggest that the Queen of Sheba used to bath there, local people are keen to use this pond for water fetching, laundry and bath. 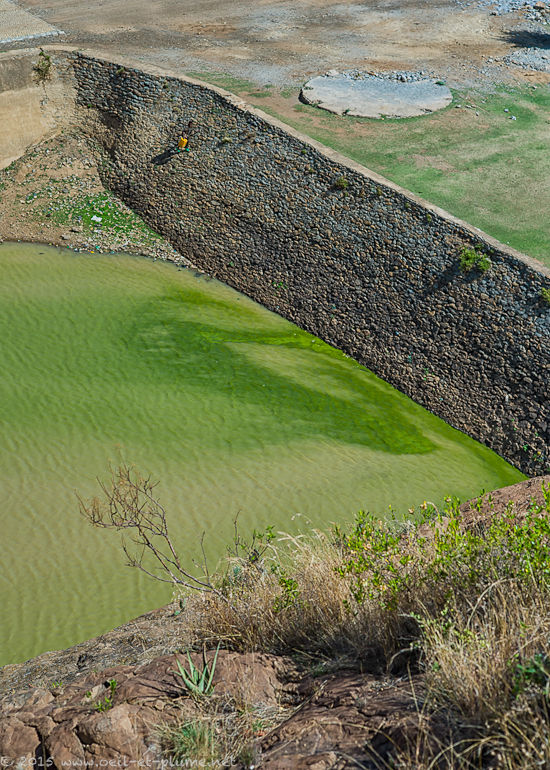 You may think that the Queen of Sheba has probably never lived in Aksum. Be aware that a team of international archaeologists announced to have identified the ruins of her palace in Aksum in 2008. Dating approximately 10th century BCE, the historical site reportedly entailed various ceremonial objects including an altar that may have housed the Ark of the Covenant.

Moreover, one of the major Aksumite stelae lying now on the ground bears an engraved drawing evoking the Ark of the Covenant.

Finally, the Ethiopian Orthodox Church claims that Menelik I, the son of the Queen of Sheba and the King Solomon, placed the Ark has been placed in the Church of Our Lady Mary of Zion in Aksum after having brought it back from Jerusalem. Don’t think that you can check by yourself, as the place is out of reach for normal citizens and believers.

In any case and owing to the alleged presence of the Ark, Aksum constitutes an important pilgrimage site for Ethiopian Orthodox, attracting flock of people from all over the country during religious festivals. 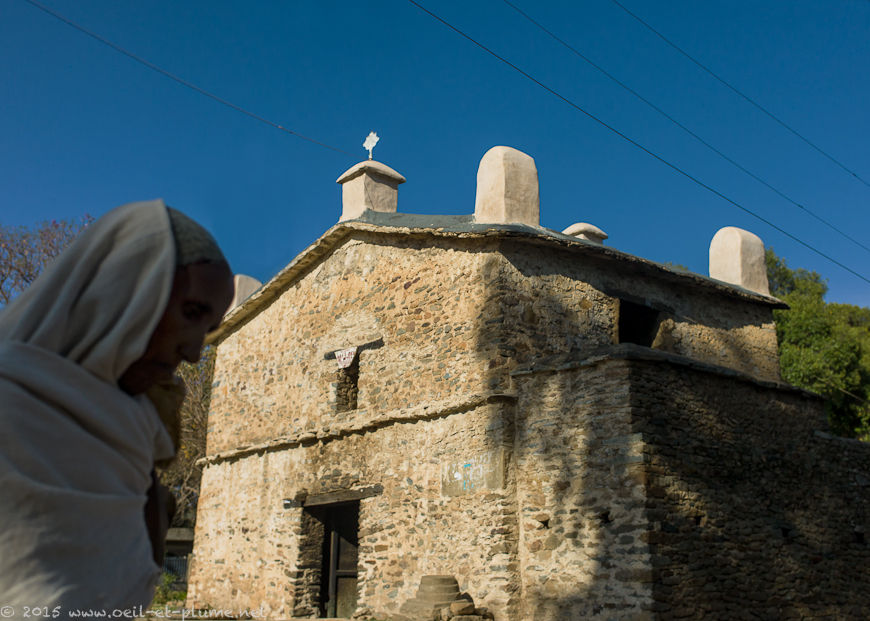 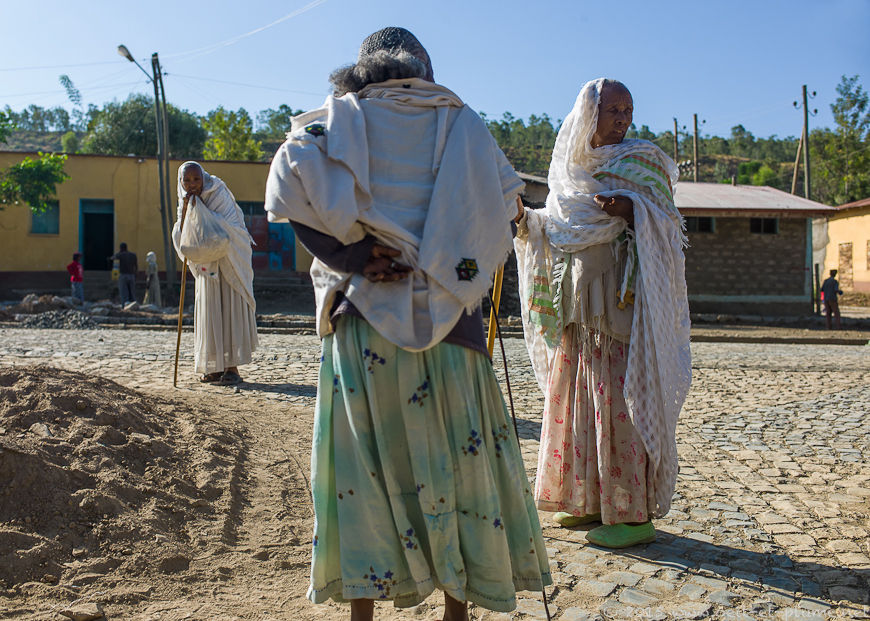 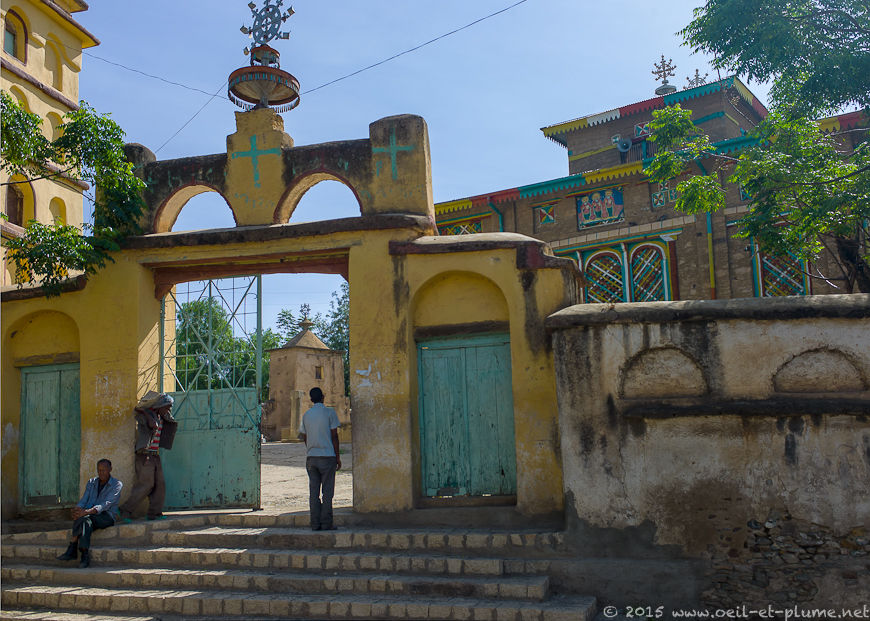 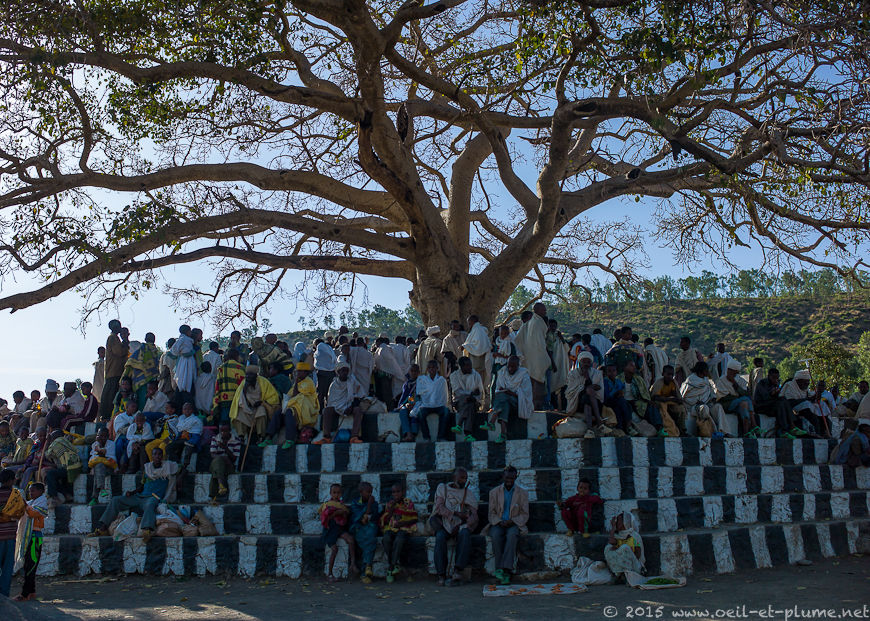 Contemporary Aksumites are still fascinated by stonework.  Drawing useful lessons from the past, they do not work anymore on massive monoliths that may fall and break into pieces as the Great Stele. Most of Aksum’s central streets are nowadays in the process of being covered with cobblestones. 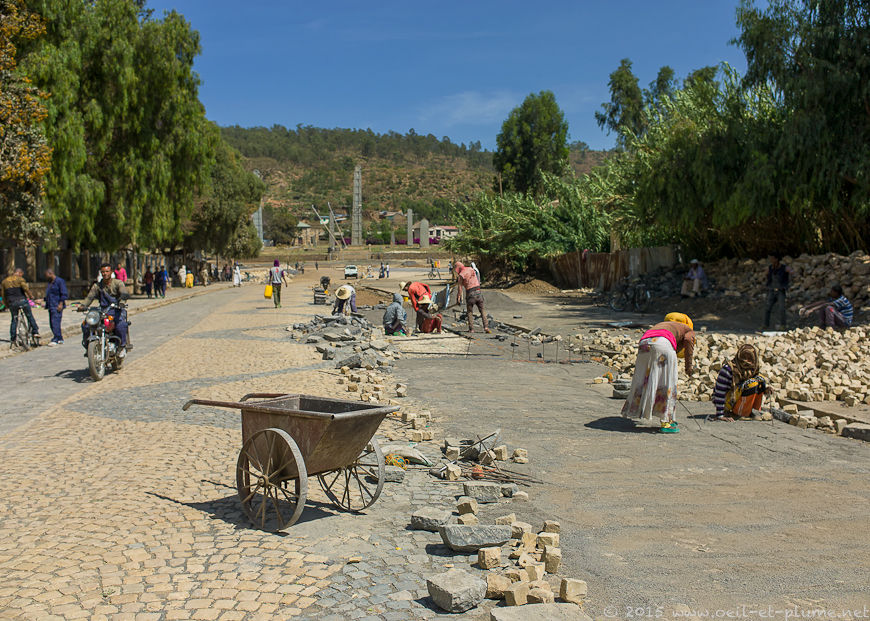 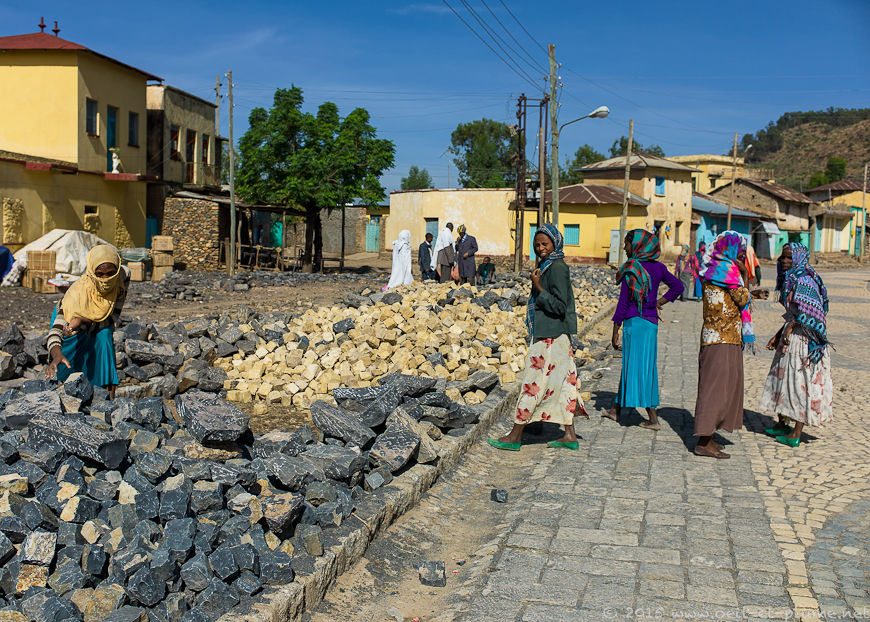 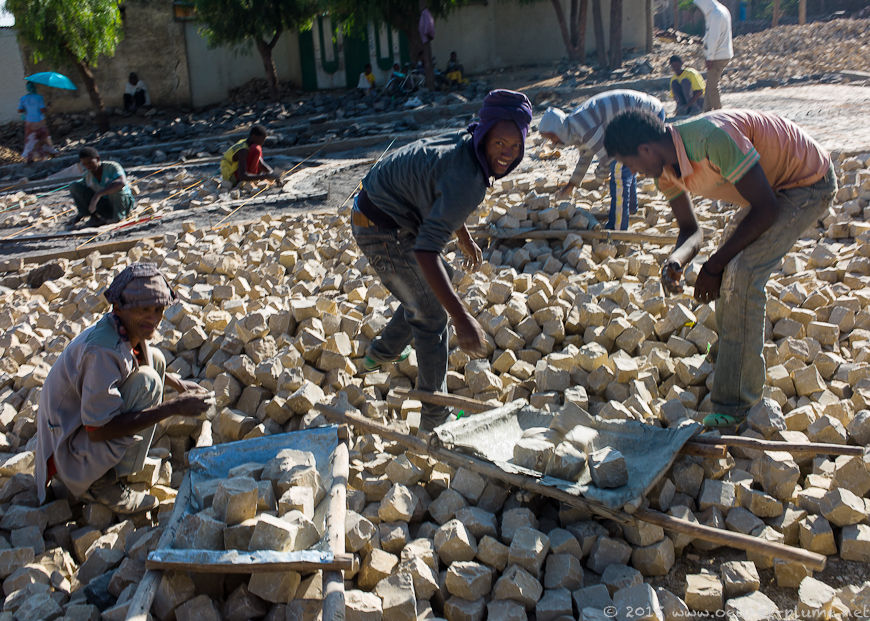 Aksum is also famous for its strong tradition of basketry. Local female handcrafters produce amazing pieces of wickerwork, unfortunately often too big to fit into a globetrotter’s luggage. 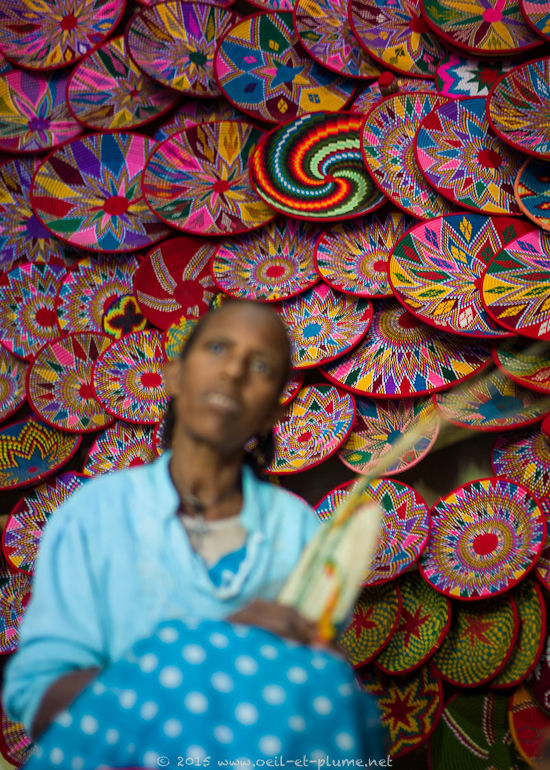 As Aksum is closely connected to its surrounding countryside, I spend much time wandering around in rural areas. Early morning, farmers and herders flock into the town to trade their production or find some paid work. 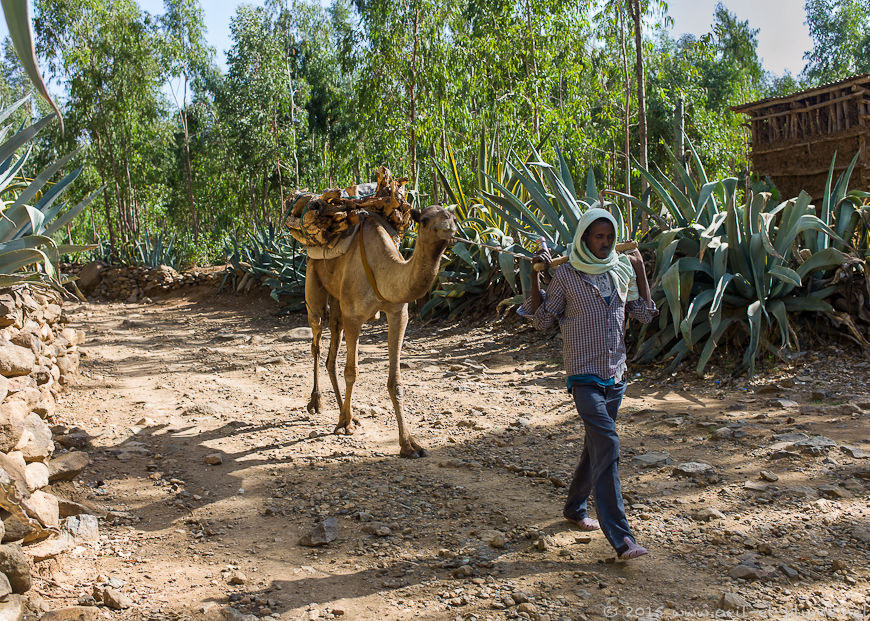 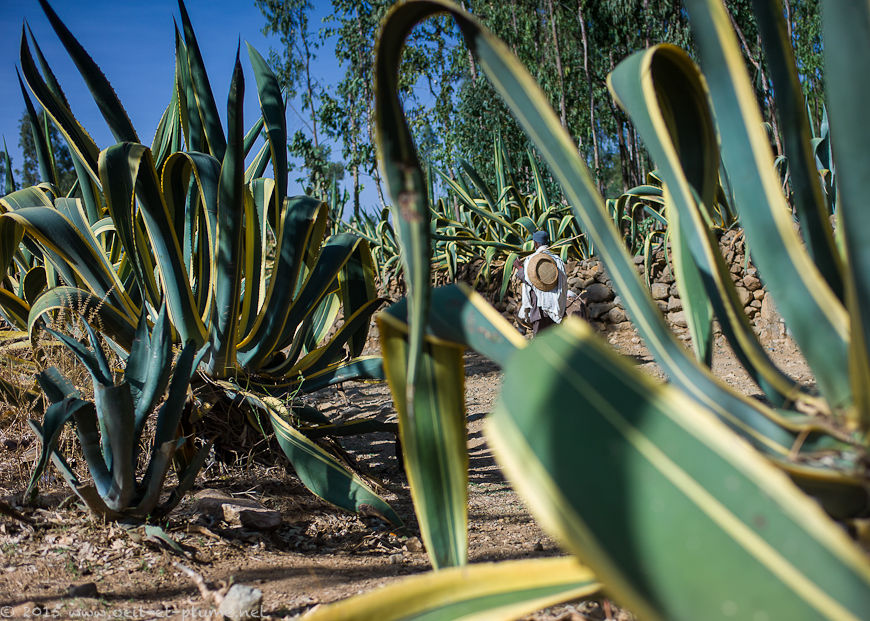 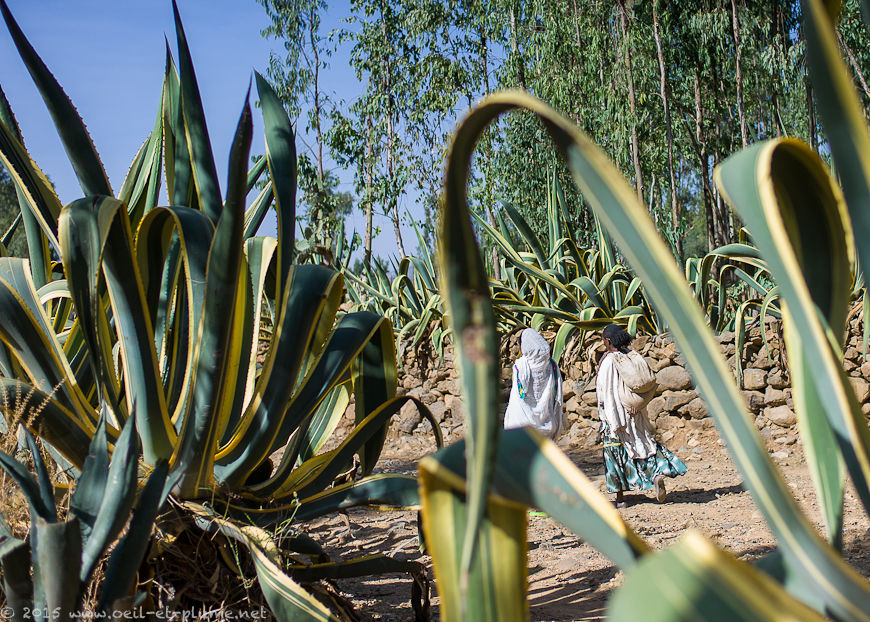 My encounter with this man is quite moving. He let me understand with gestures and no single word that he is quite hungry. His worn-out dress only confirms his economic hardship. 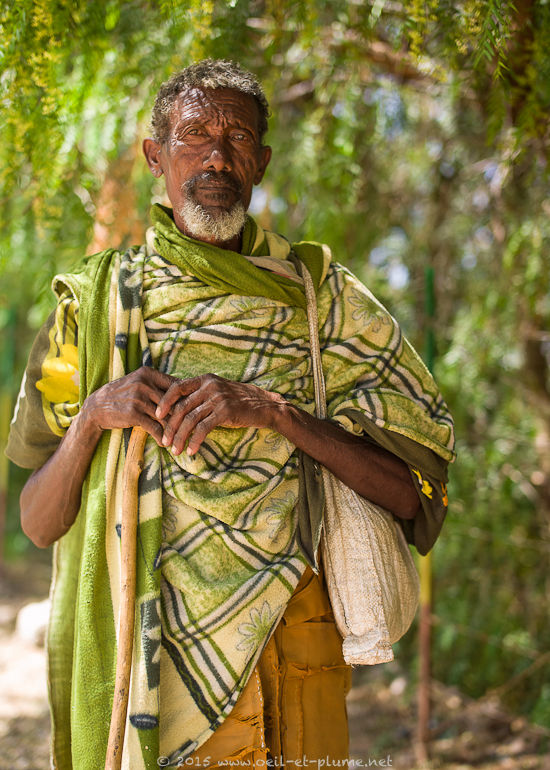 With gestures still, I propose him a portrait session against some money. The man gladly accepts and deposes the bag that he was carrying on his head. His pose and facial features express an unexpected noblesse but also quite some distress. The old man nods at the photographic outcome of the session and walk away, lonely and lonesome.

As the camel men return to their village, I follow them at distance, keen to discover new locations and meet new people. This is how I come across this idyllic tiny village topped with a church perched on a rock. 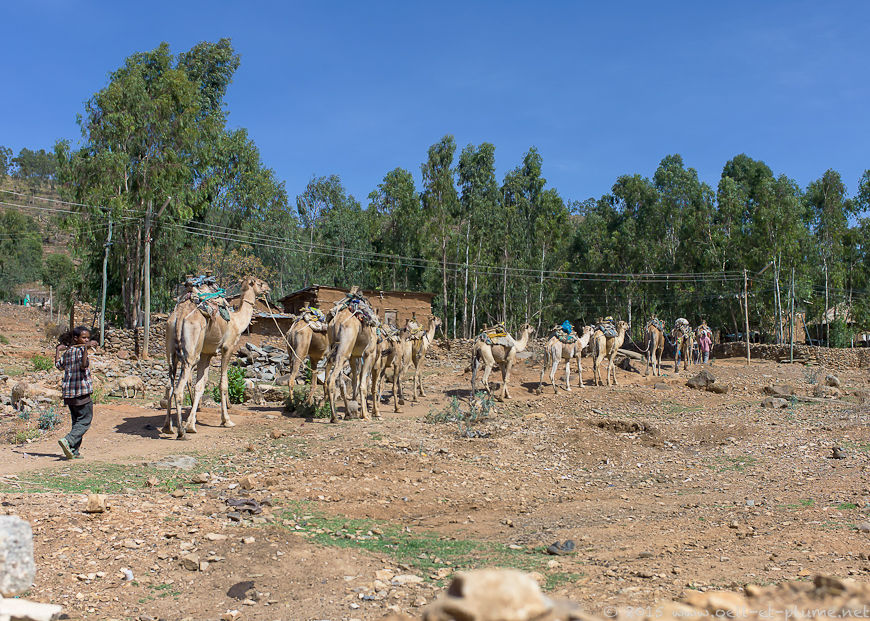 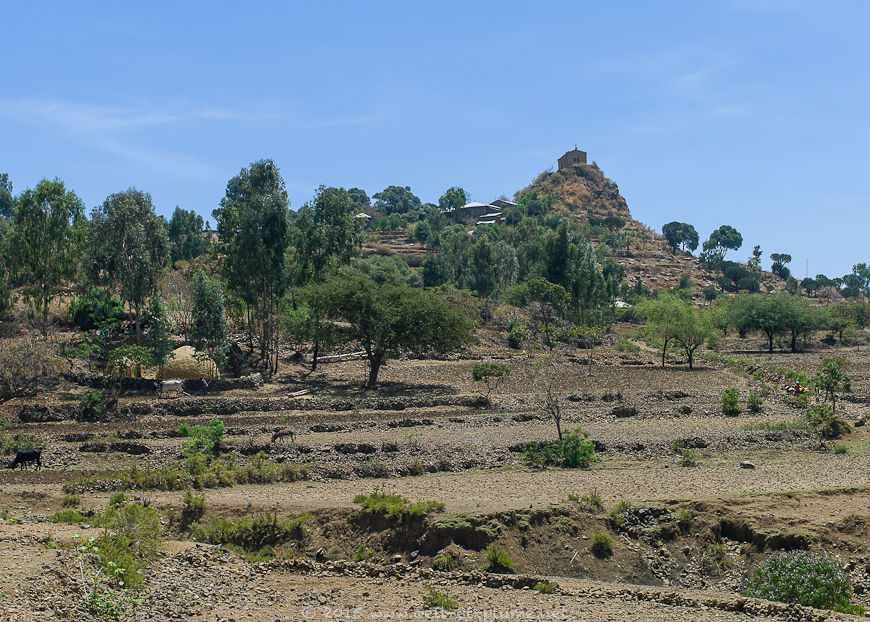 It is midday and the sun hits hard. A group of youngsters guiding donkeys loaded with jerry cans approach me on their way to a pond. They are to fetch water for domestic purposes. 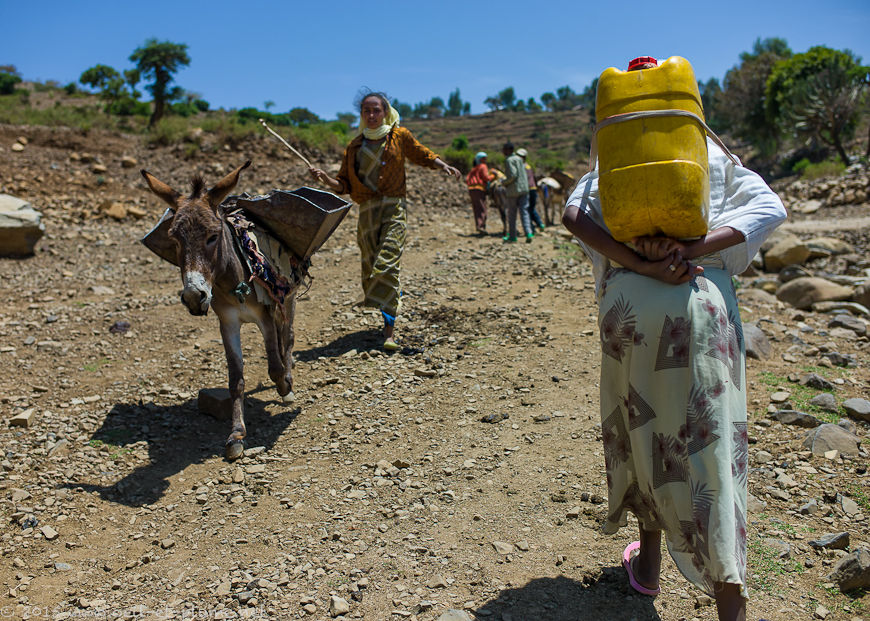 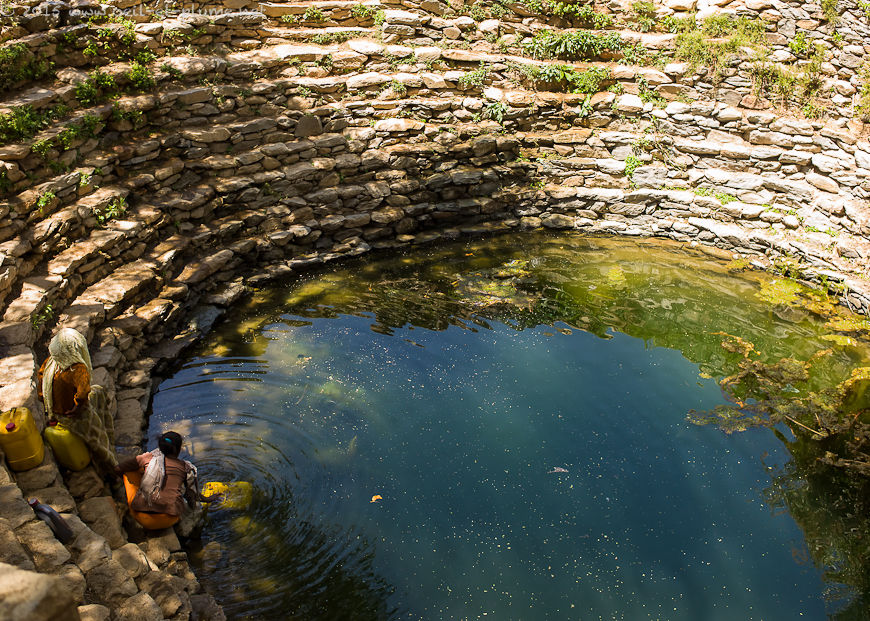 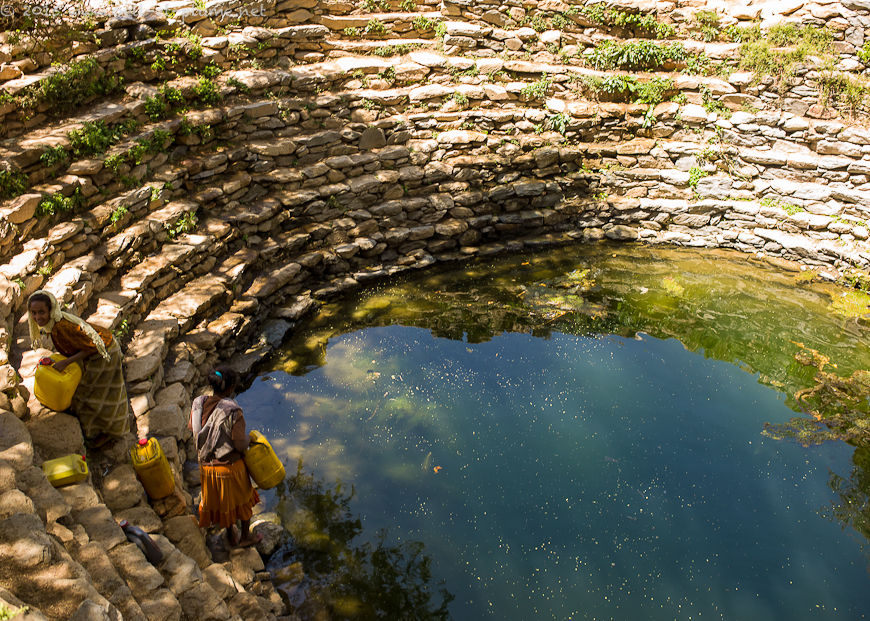 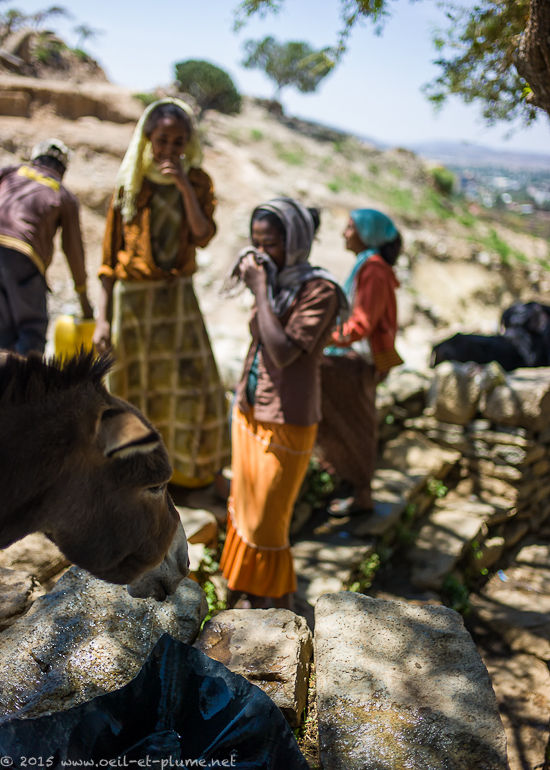 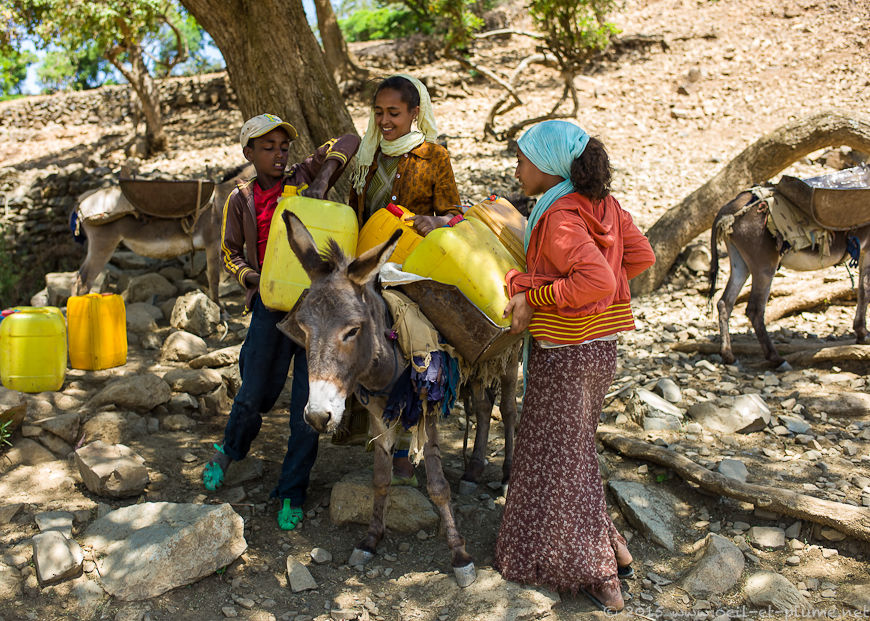 Donkeys are now loaded with water. Remains the stiff ascent to the village. Aksum region is quite scarce on water nowadays, unlike the golden times of the Aksumite Kingdom when important amounts of agricultural products were exported abroad.

Aksum’s charm does not just rely on history, hearsays and legends. It is strongly anchored in history but also very much into its century. The small town is surprisingly vivid and attractive, nurturing an urban culture deeply rooted in rural life. 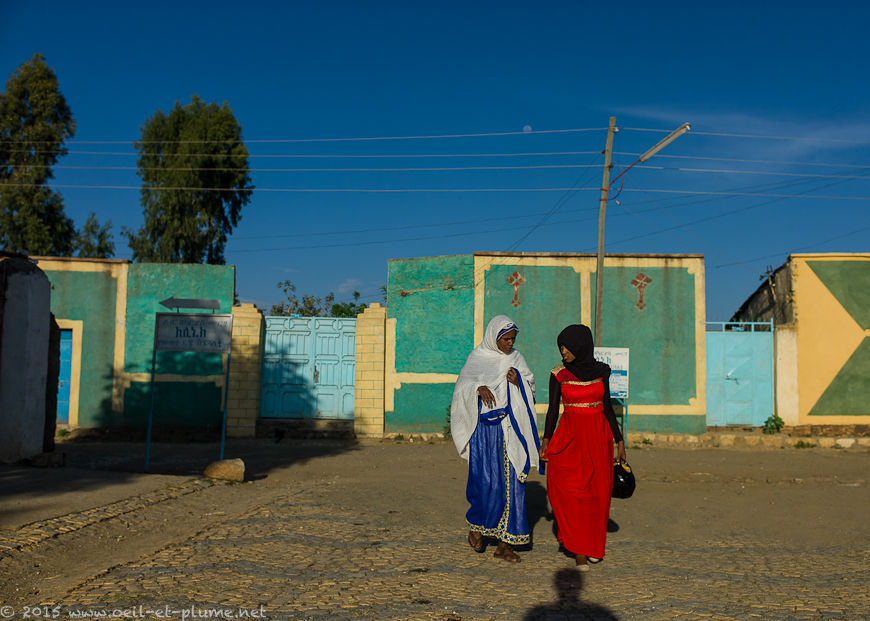 This is the distinctive spirit of a very special place.