Leaving Bhutan, I fly straight to New York City. The inter-continental journey implies quite a contextual change indeed. A stark cultural contrast for sure, but no bold cultural shock as I find quickly a thread connecting both places and experiences : traditional dance.

Days after attending the colourful Thimphu tshechu, I join a pow wow in Randall’s Island in New York City.

A bus full of Harlem’s social characters drives me from Eastern Harlem to Randall’s Island. The pow wow is to take place in an open and green place, next to an American football stadium and playground, and close to Manhattan’s main island. 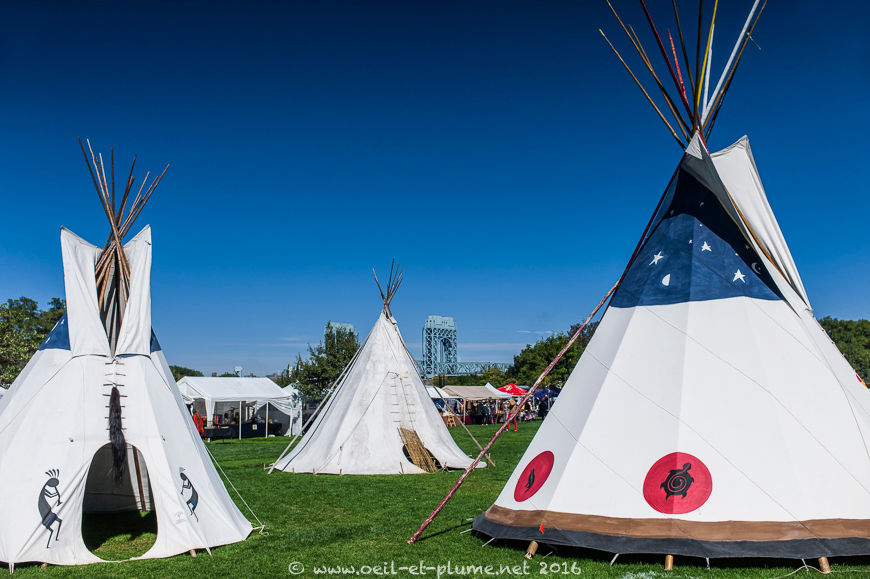 The pow wow is part of a Native American Festival gathering native people of North America, South America, the Caribbean and Polynesian Islands. As time-conscious globetrotter, I attend only one of the three-day celebration.

Today’s pow wows are social gatherings held by Native Americans to meet and socialize, to dance and sing, as well as to honor and promote their cultures. They often include dancing competitions across the tribes represented.

Pow wows are more than social gathering or dancing contests to entail a strong spiritual dimension. Originally, they also included healing rituals. Pow wows were, and still are, key venues for nurturing the Native Americans’ oral cultures and traditions across generations. Modern pow wows are also political tribunes to advocate for their collective claims and rights. 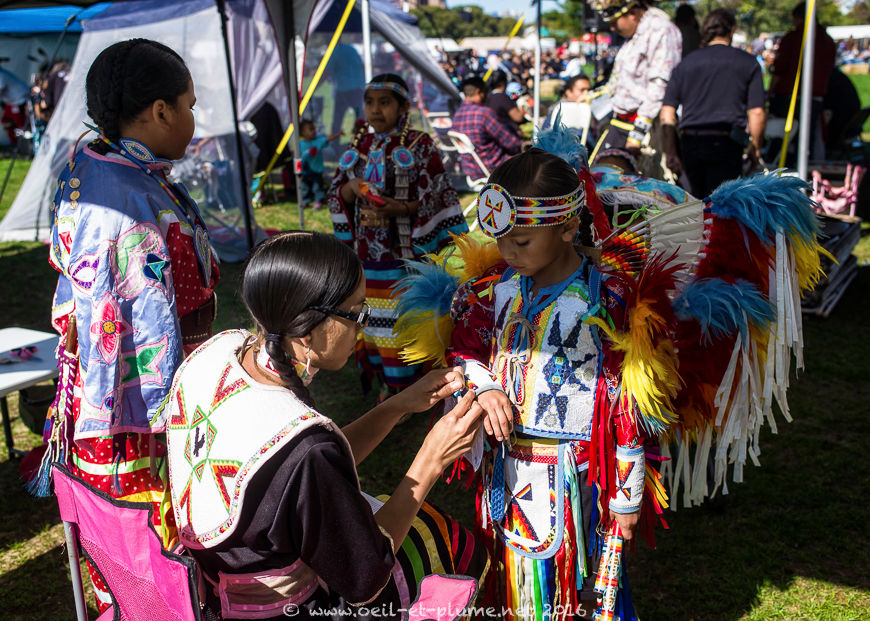 In the backstage, all participants, males and females, adults as kids, adjust their sumptuous regalia. Musicians make themselves ready. Drum groups often consist in family members or friends. While there may be several drums at a pow wow, there is only one host drum that is accorded great respect and authority. The excitement rises as the pow wow is about to start. 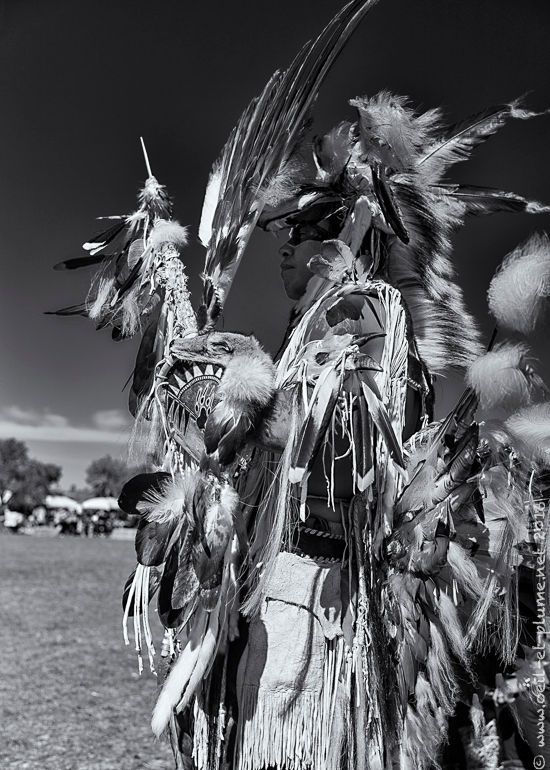 Orchestrated by the master of ceremony, the Grand Entry gathers a colourful crowd of participants in the grass arena. The ceremony is led by the head dancers and a military veteran carrying respectively the Eagle Staff and the Indian American flags. Men, women and children dressed in regalia follow in an orderly manner. 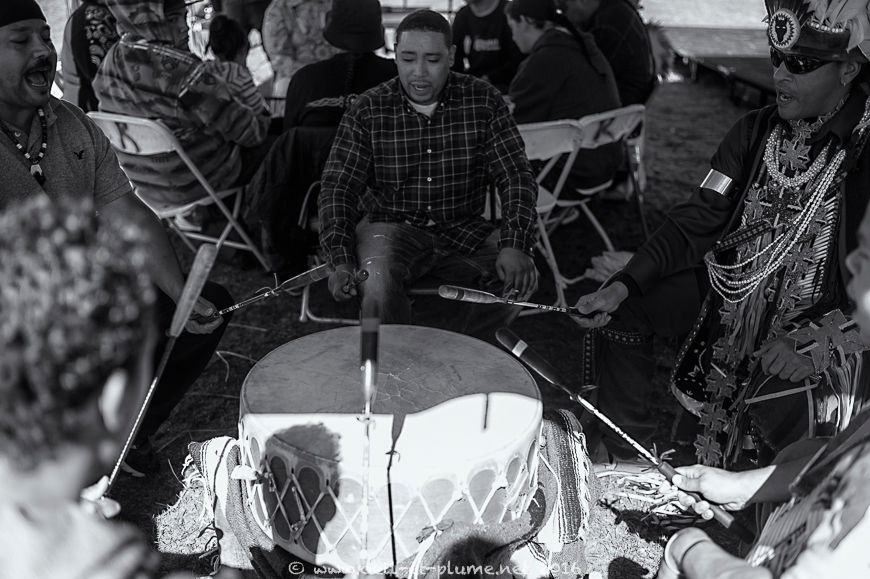 In the backstage, the drummers perform an opening song, followed by a prayer. The dancers then tour the arena clock-wise to greet the audience, and leave the floor to the first dancing performance. 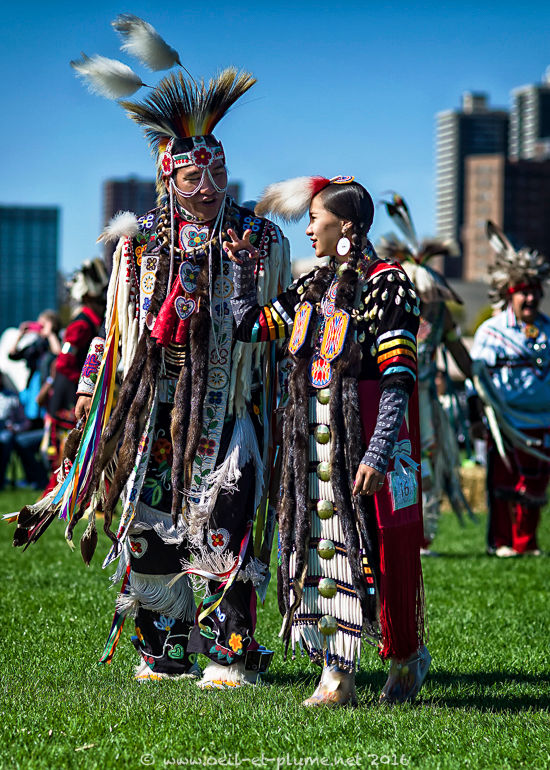 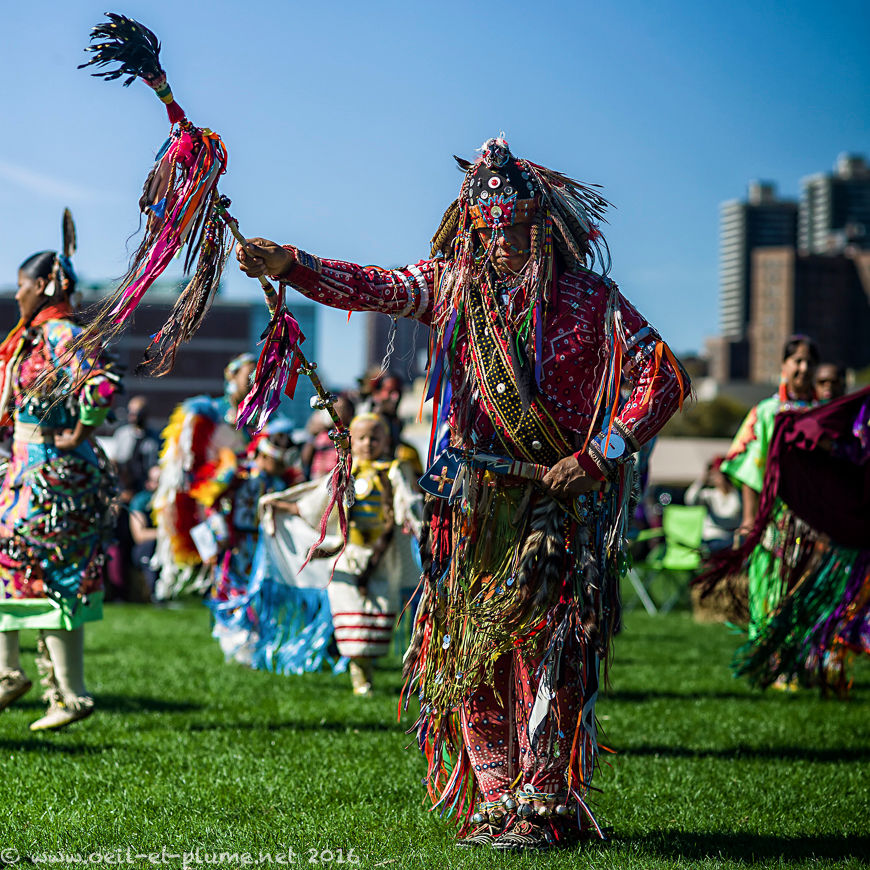 The Aztec culture and empire flourish from the 14th to 16th centuries, headquartered in the capital Tenochtitlan in Central Mexico – where Mexico City is located today. Aztecs develop a tribute more than a territorial empire, built on a combination of trade and military conquest. It is run mainly through indirect political rule and economic tributes to control and benefit from client states and communities. In its heyday early 16th century, the Aztec empire connects the Pacific and Atlantic oceans, encroaching south into the Chiapas and Guatemala. 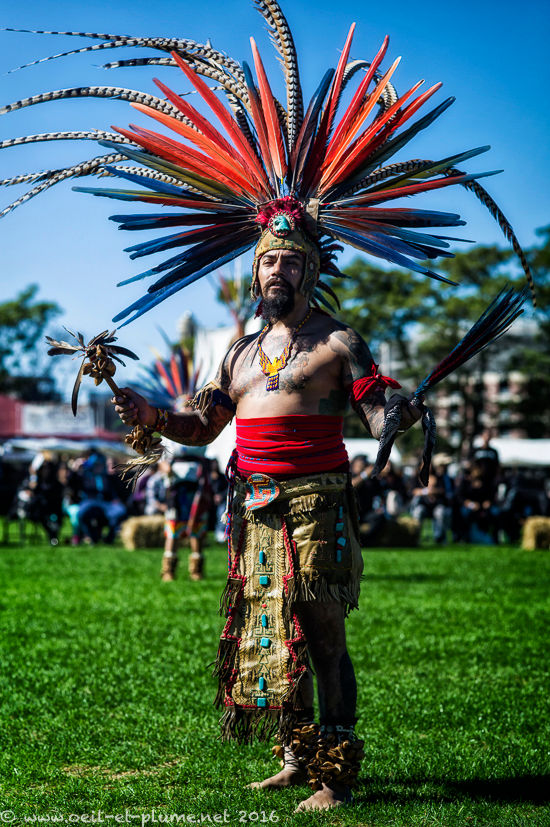 According to Aztec mythology, darkness first covered the earth. The gods gather and make a fire. Nanahuatzin, one of the gods, leaps into the fire and transforms into a sun. Another god jump into the fire to gift blood to the newly-born sun who then travels into the sky and starts lighten the planet earth. 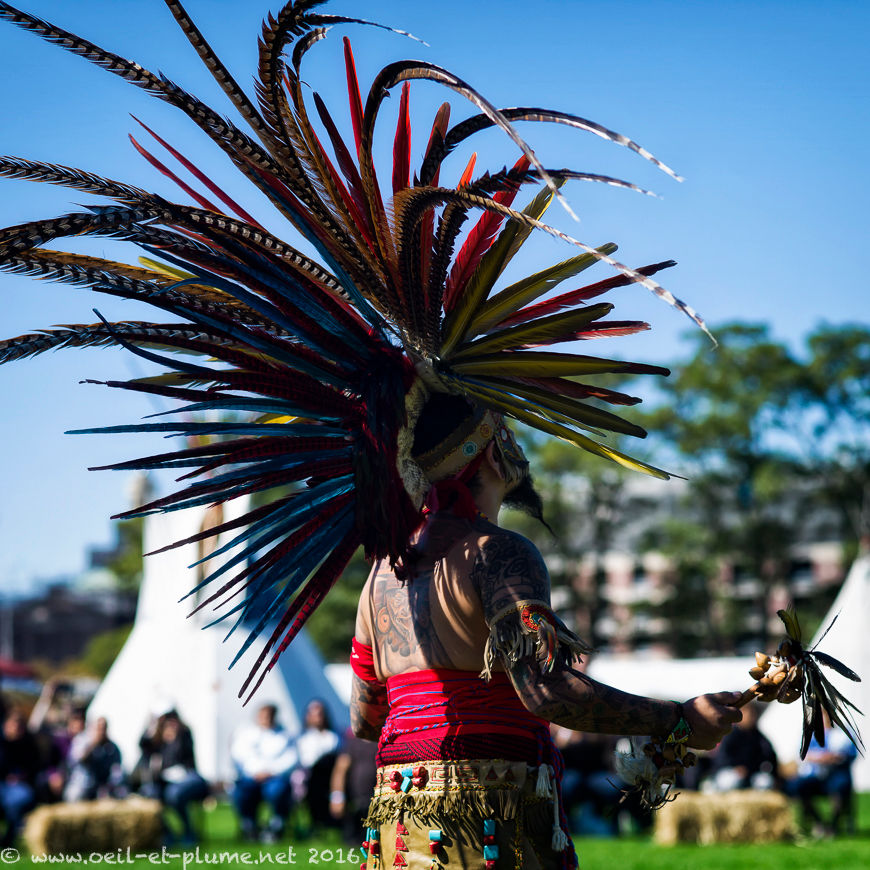 Hence humans, who are mere servants of the gods, are bound to imitate the gods’ sacrifices and keep the sun alive with human sacrifice and blood. Otherwise, they will be wiped away by a disaster. 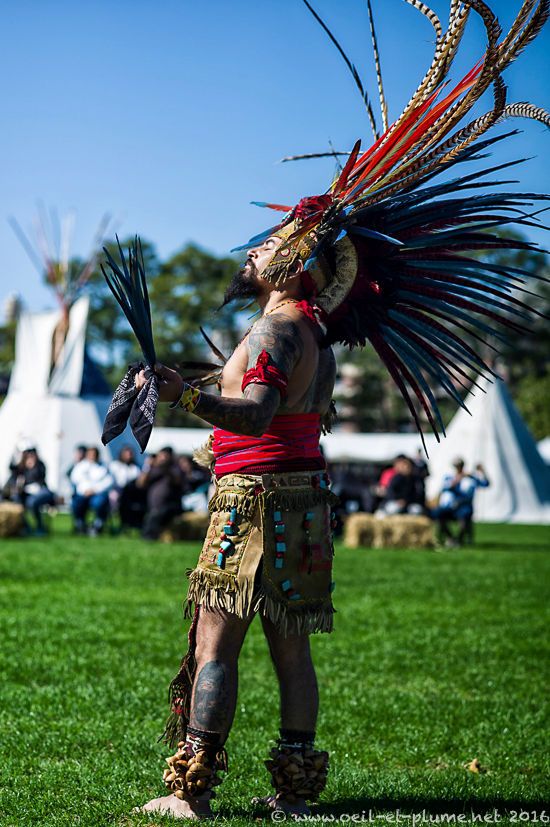 In the 14th-16th centuries, Aztecs follow a very strict moral and social codes to please their gods. They carry out massive human sacrifice to feed the deities and ensure their own survival. Ten of thousands prisoners are killed for instance during the consecration of the Great Pyramid in their capital town in 1487. The Aztec empire nonetheless falls to the Spanish conquistadores in the early 16th century.

There is fortunately no military conquest nor human sacrifice or natural disaster in New York City today, but a vibrant cultural contest. 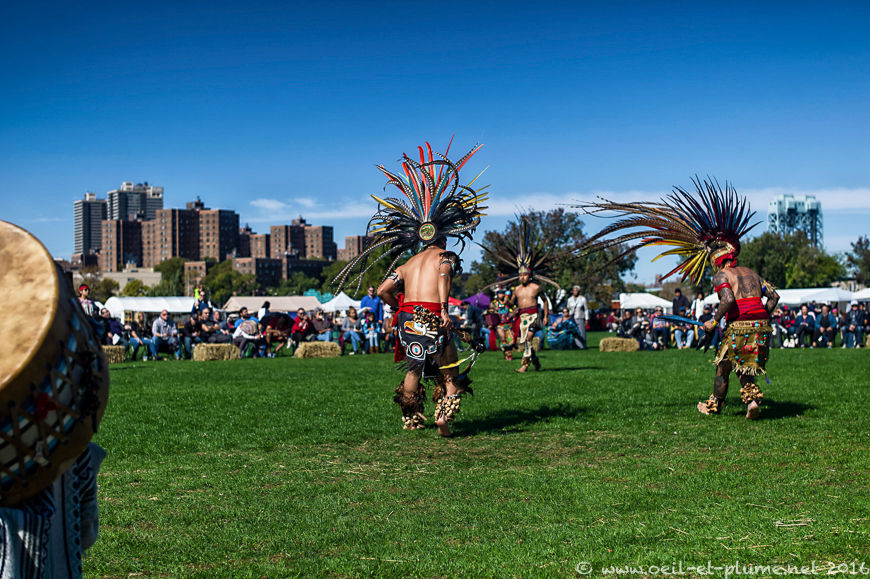 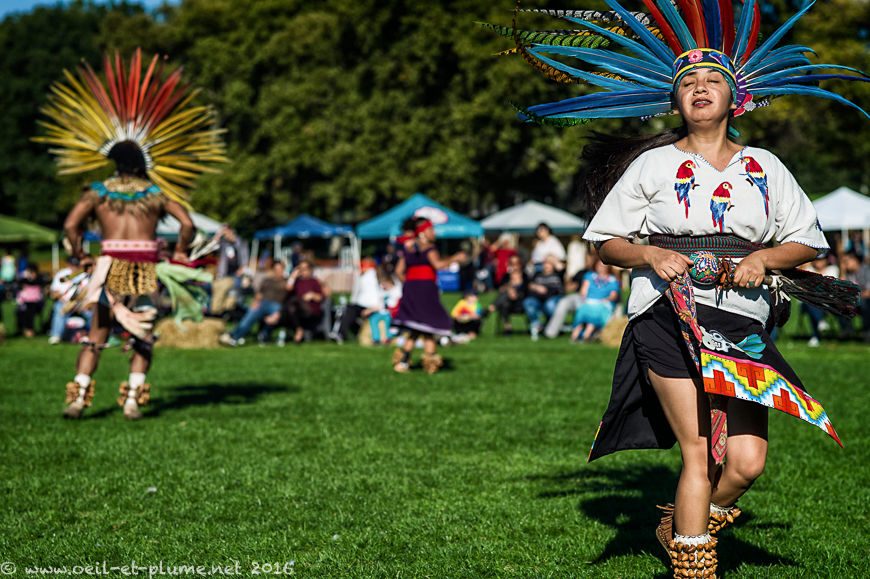 The Aztec dancers honor the sun and other of their gods. Their athletic performance, added to their terrific head gear, suggest their readiness to fight against the adversity as well as their strong connection with the natural elements.

The master of ceremony suggests that the Aztec’s deep sense of spirituality and ecology was key to their cultural, technical and political zenith in the late 15th century. Hence to argue that Western modernity has not invented as much as it pretends. 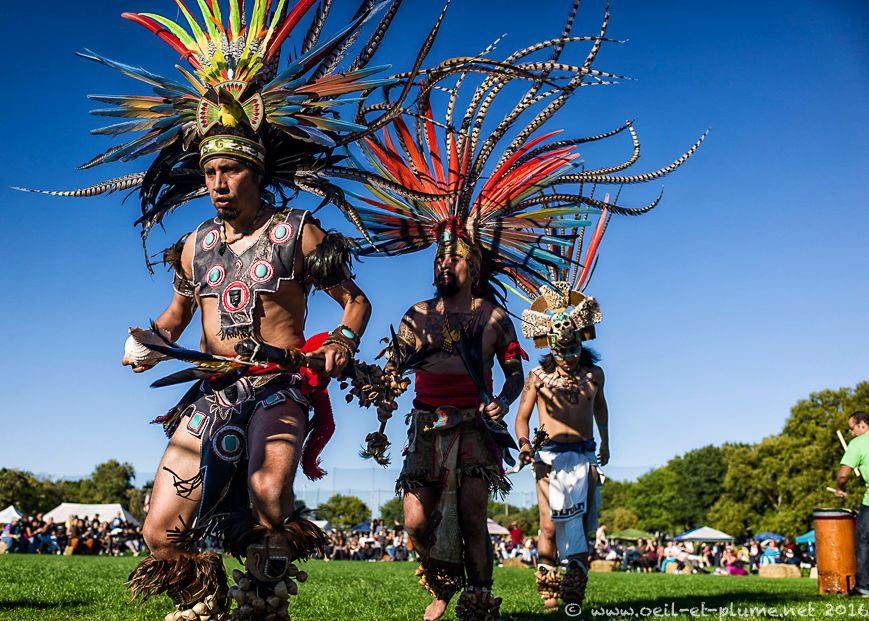 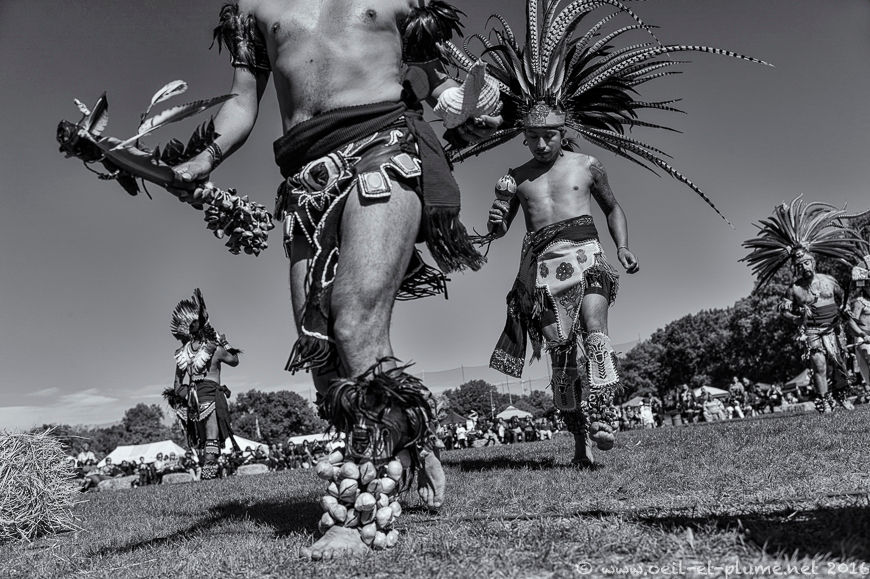 No direct historical interaction between Native Aztecs and Americans is known to date. In turn, semi-nomadic tribes living in the north of the Aztec empire had contacts with Native American tribes due to their geographical proximity.

Native Americans do not celebrate Colombus Day on 12 October – a public holiday in the USA. They run a counter celebration to suggest an alternative lecture to Christopher Columbus’ arrival in the Americas on 12 October, 1492. 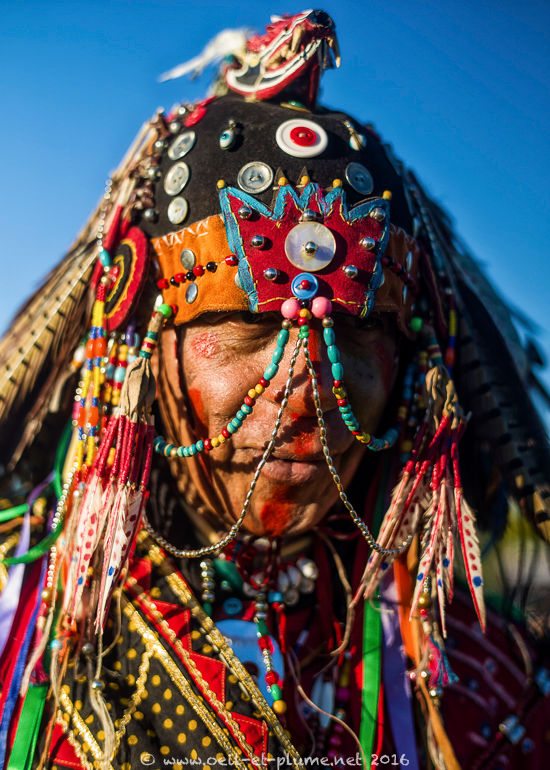 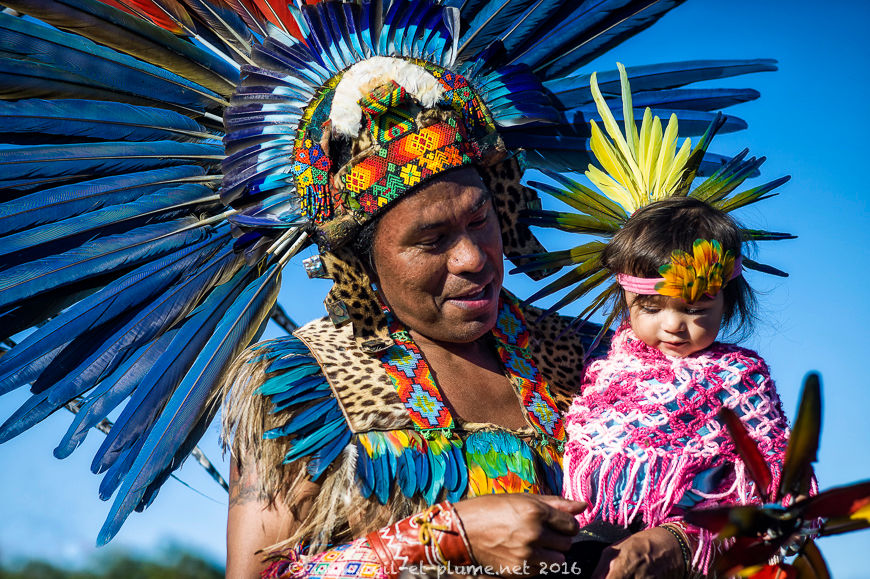 The pow wow’s master of ceremony explains that the Indigenous People’s Day scheduled on the next day aims to celebrate the Native Americans’ culture and history, rather than their ‘discovery’ and subsequent colonization. ‘Native Americans discovered Colomb on that day, not the other way round’, he argues.

‘Aloha !’ The next guests and performers are Native Hawaiians. Calling themselves Kanaka Maoli, they are descendants of the early Polynesians who arrived in the archipelago 1,500 to 2,000 years ago.

Some 400,000 people identify themselves as Native Hawaiians nowadays. They are not legally considered as Native Americans by U.S. authorities. Nor do many Native Hawaiians consider themselves as Americans. ‘Hawaiian by birth, American by force’ is one of their slogans calling for the revision of what they consider the forced annexation of their archipelago by the U.S. government in the late 19th century.

Native Hawaiian culture witnesses a revival in recent years in parallel to a vocal political advocacy. Pua Case, a leading Native Hawaiian activist, is granted the floor to expose one of her pieces of advocacy.

There is an ambitious and expensive project to build the world’s largest optical telescope on top of Mauna Kea (White Mountain). A dormant volcano, Mauna Kea is the most sacred mountain in the archipelago for the Native Hawaiians.

Mauna Kea is already home to a dozen of telescopes as its altitude and geolocation is free of light pollution. The planned telescope is massive, to be installed in a 18-storey building.

Native Hawaiians view the telescope project as a desecration of Hawaiian culture and another abuse of U.S. government over Hawaii’s right to independence. A civil resistance movement named Mana Kea Protectors is born, seeking national and international audience and support.

Mana Kea Protectors claim not to oppose science per se, but to advocate instead for the respect for sacred places. Mother Earth is alive and home to both humans and deities. Sacredness connects with the natural and spiritual worlds. Mana Kea is the domain of gods and goddesses, and the portal to the other world. Therefore, it must be protected against commercial exploitation and scientific exploration.

‘Aloha’ is a key word and a possible solution. In the Hawaiian language, it means ‘hello’, but expresses also affection, peace, as well as compassion and mercy. Hawaiian people demonstrate aloha in the way they treat others, be they relatives, friends, neighbors or strangers. What about showing aloha to Mother Earth ?

Many Native Americans attend the 2015 New York City pow wow indeed. Demographically speaking, they count for less than 1% of the U.S. total population, and about 0.6% of the resident population in New York. Cherokees, Navajos and Sioux constitue the main tribes. Native Americans are entitled to a certain degree of self-government under U.S. law through over 560 tribal governments across the USA.

The dancing contest goes on, with numerous performances ranging from Fancy Dance to the spectacular Grass Dance, featuring regalia with long, flowing fringe and designs reminiscent of grass blowing in the wind. 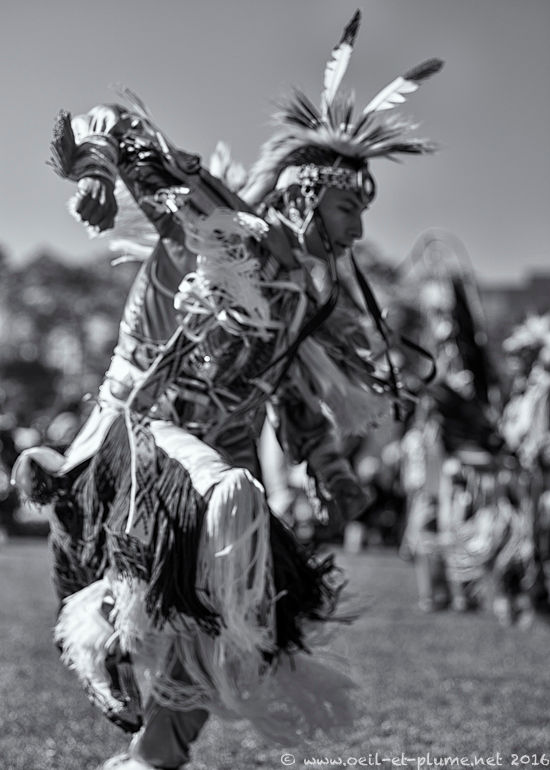 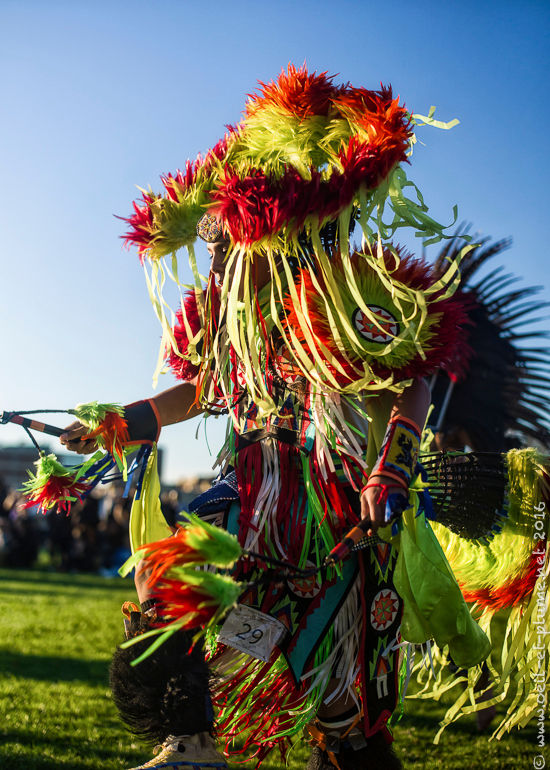 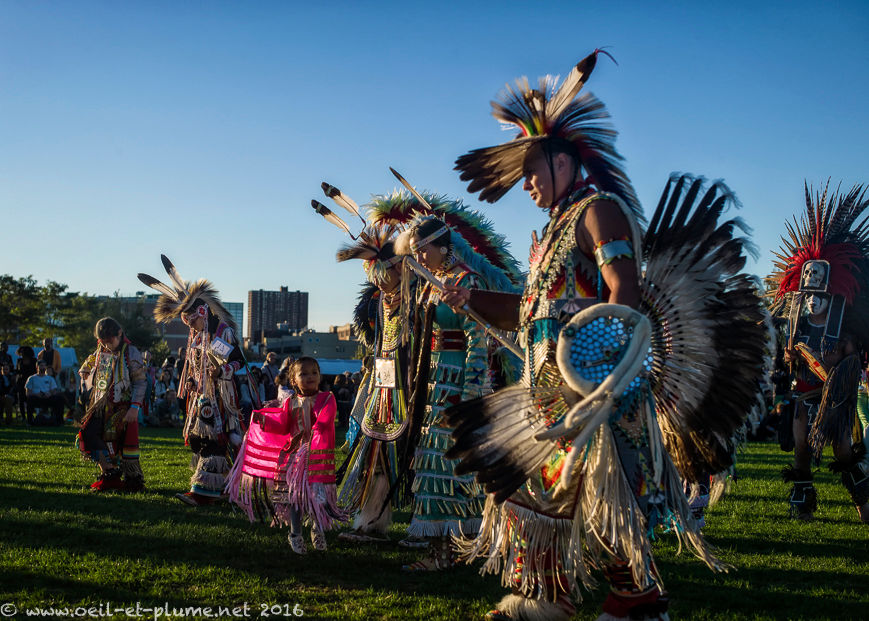 All those are male dances. I don’t remember any specific female dance such as Fancy Shawl or Jingle Dress unfortunately. Gender roles are well differentiated in many Native American tribes. While most tribal structures are patrilineal, some like the Cherokees are matrilineal : mothers control property, leadership, and descendance.

In-between dancing performances, the pow wow’s master of ceremony flags what he considers to be major Natives’ imprints on contemporary America.

Living in the Great Lakes area, the Iroquois are famous for their Great Law of Peace – an oral constitution having bound six tribes for centuries under the Iroquois Confederacy. The original five member nations ratified this constitution in today’s New York State in the 12th or 16th century, joined by the sixth nation in the early 18th century.

Moreover, Native Americans are reputed for their intimate connection to their natural environment. They consider themselves as part of Nature rather than ruling it. The human, animal, vegetal and mineral worlds are interconnected and equally worthy. Ecological consciousness and self-restraint helped Native Americans living in north America for centuries. Recent times witnessed serious disruptions of the ecological balance struck by Native Americans, it is argued. 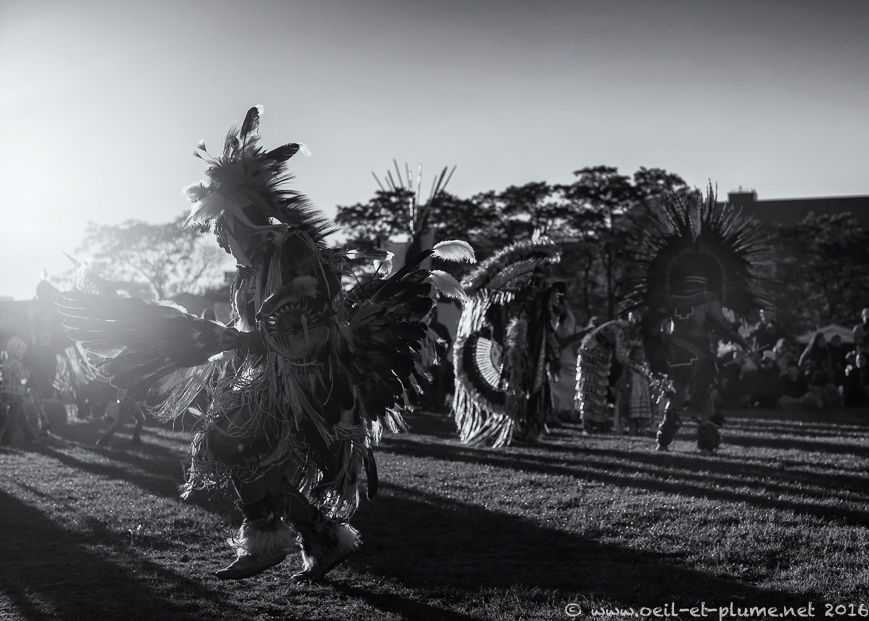 The day closes with the same ceremonial than the Grand Entry, followed by an Intertribal Dance. Anyone, including spectators, are invited to come and dance. People form an human chain joining in a circle. They turn around, and around and around until blurring my vision. 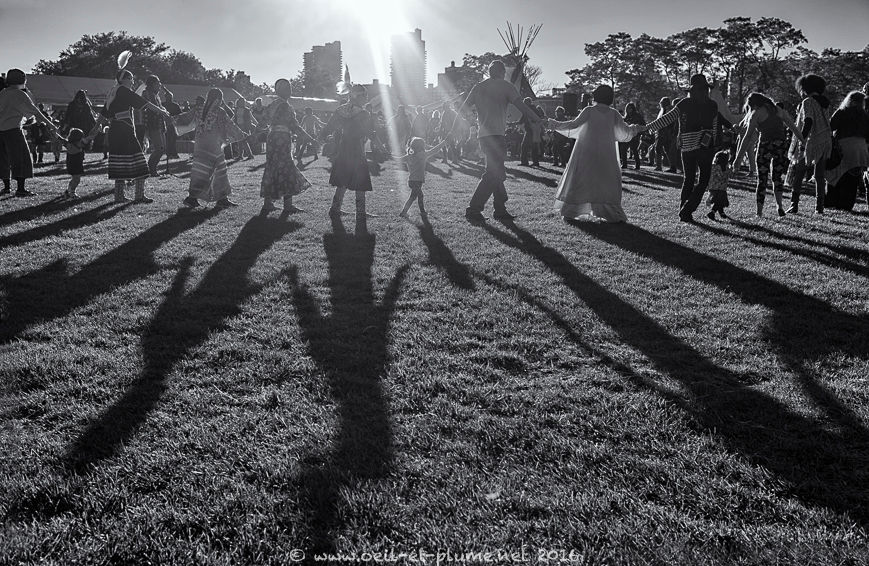 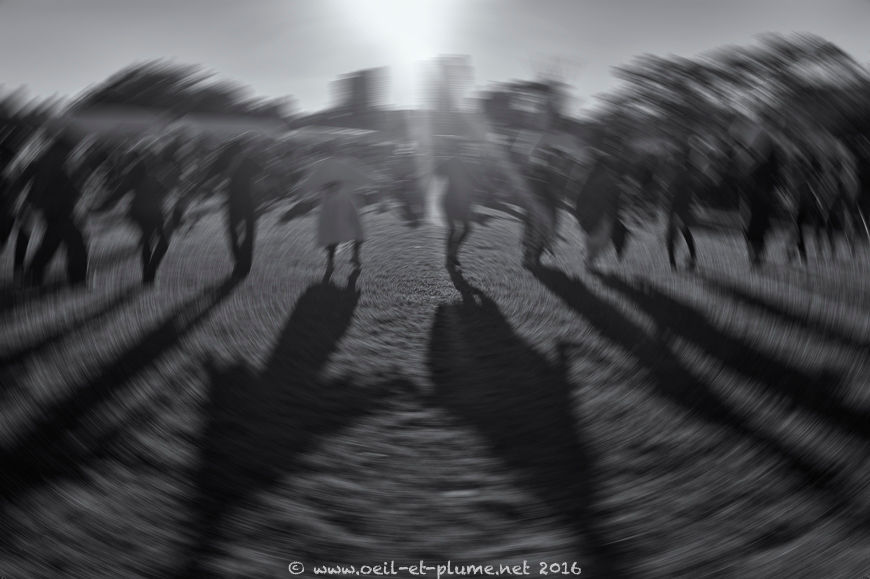 You may have expected my first New York post to present skyscraper buildings, joggers and busy street life. I prefer starting with the beginning : the Native Americans, whose pre-columbian ancestors were indigenous to the lands, as well as their guests from all over the American and Pacific region.