I meet with the elder dandy in the early hours of my first day in Göreme – one of Cappadocia’s touristic hotspots. Elegantly dressed with suit, tie and hat, the gentleman walks out slowly of the village, two beautiful red roses in his hand. In the outskirts of the village, he crosses two Japanese tourists, and spontaneously gifts one flower to one of them. I suspect that the blessed girl fell instantaneously in love with her benefactor, while her travel mate probably passed away the next day out of acute jealousy.

Following his generous gesture, our Cappadocian dandy quickly pursues his patient walking. Maybe tired or in a hurry, he starts hitchhiking, to no avail. All of a sudden, he extirpates a whistle from his pocket and blows powerfully in the metallic device whenever cars would pass by. Whistle blowing does unfortunately not help the elder man to get a lift. He continues his slow walking while sniffing the delicate perfume of his red rose. The elder man is presumably ahead of an urgent love date. 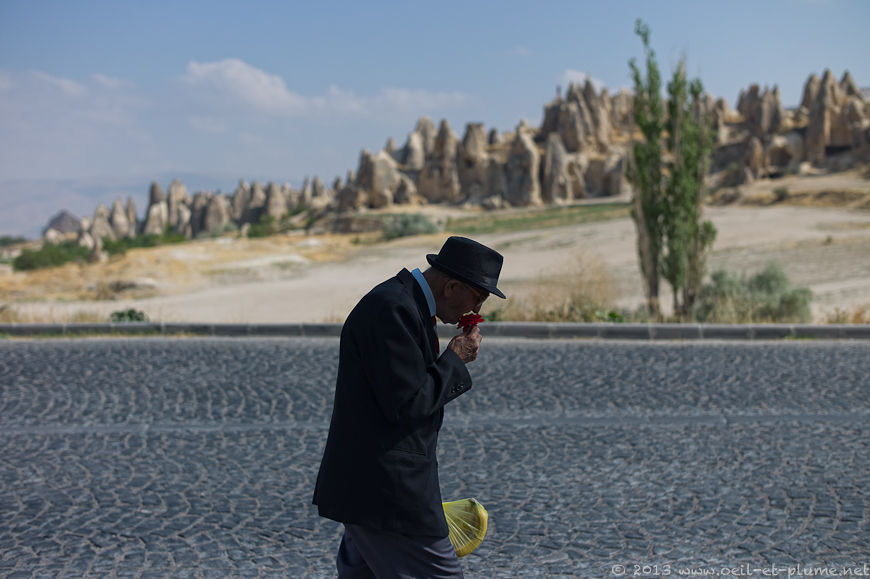 This is when I get closer to him. I try to mitigate his anger about the selfishness of modern-day car drivers. Although he does not understand my English, he slowly calms down. We pursue talking, he in Turkish me in English, and walking together.

After a while, I praise his elegance and propose him a picture. He gladly accepts. It takes me quite a while to convince him to abandon his bananas for the time of the shooting session, but only a few seconds to proceed as the romantic and eccentric man proves quite to be an impatient photo model. Finally here we are: 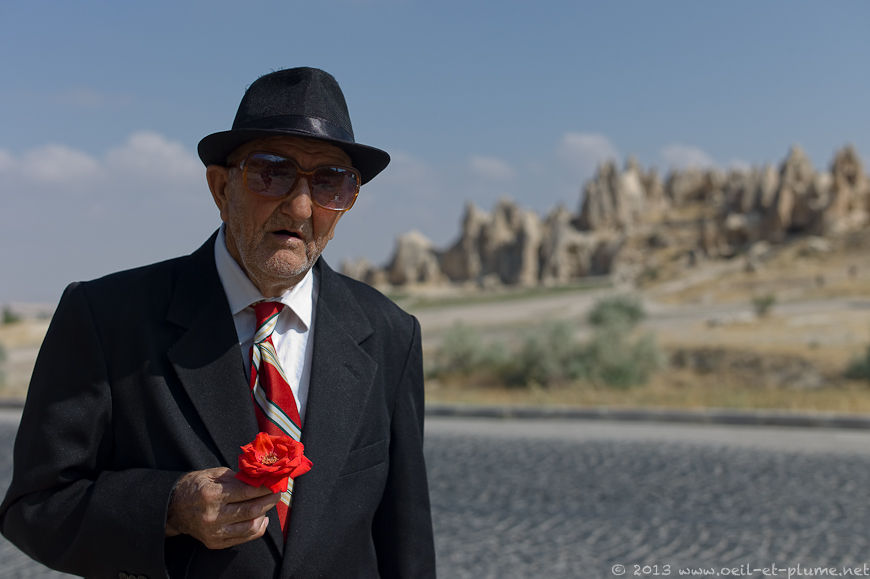 Happy about his digital portrait, our dandy goes back to his august walking and deep thinking, forgetting my very existence. Never mind. 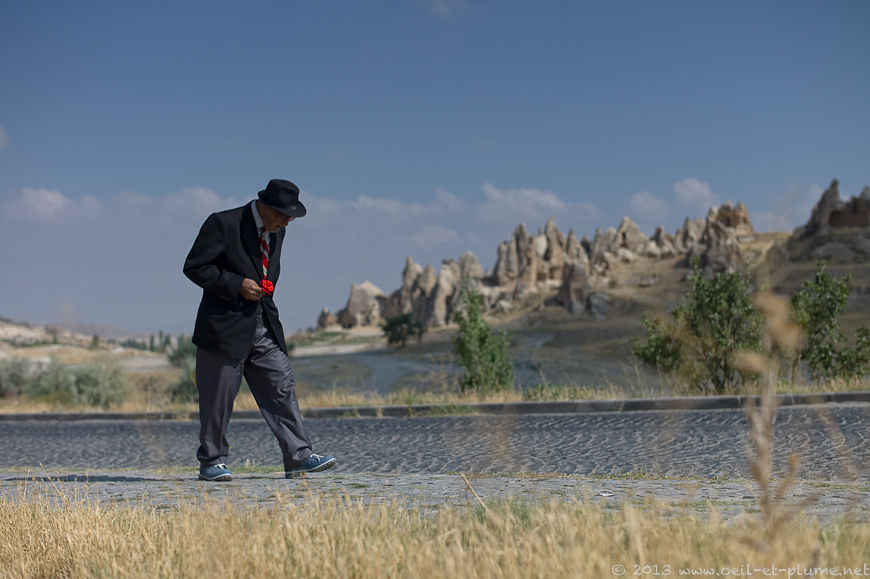 This was my first encounter with Cappadocia. Lovely indeed. Married to a Göreme native resident since two decades, the English owner of my guesthouse confirms me her love for Cappadocia’s lunar landscape and inhabitants.

Cappadocia is nowadays a heavy touristic destination. Throughout my stay, I tracked noteworthy but little-visited places that remain mostly out of sight for most visitors. In my quest for natural beauty, I always looked for a trace of human activity worth of highlighting. 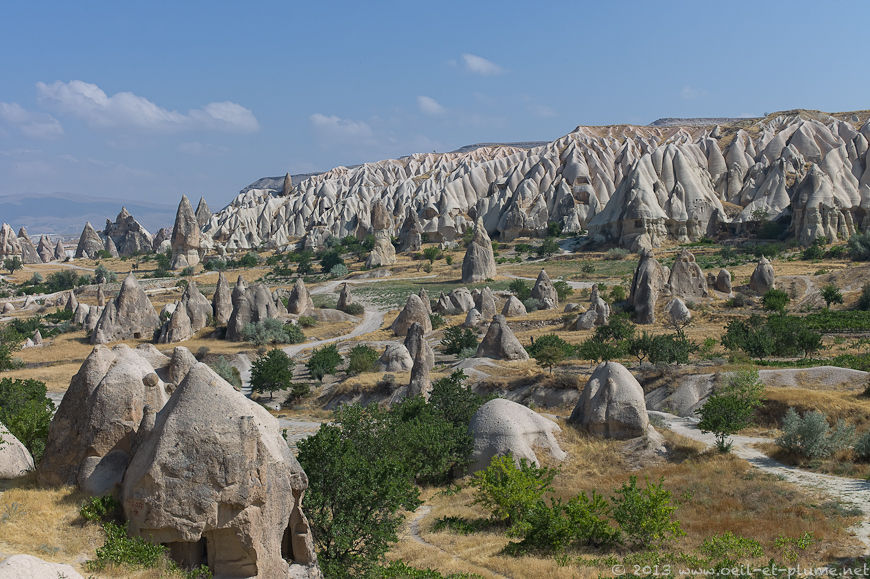 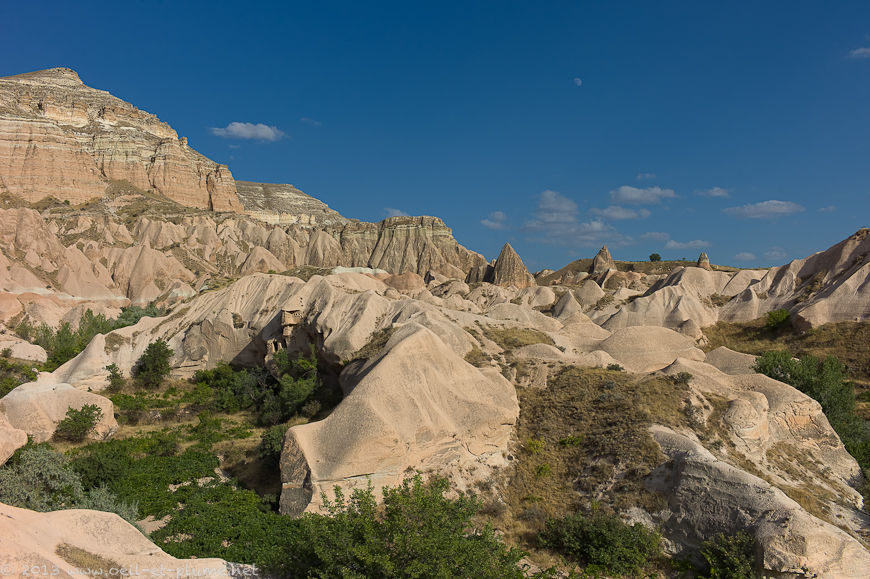 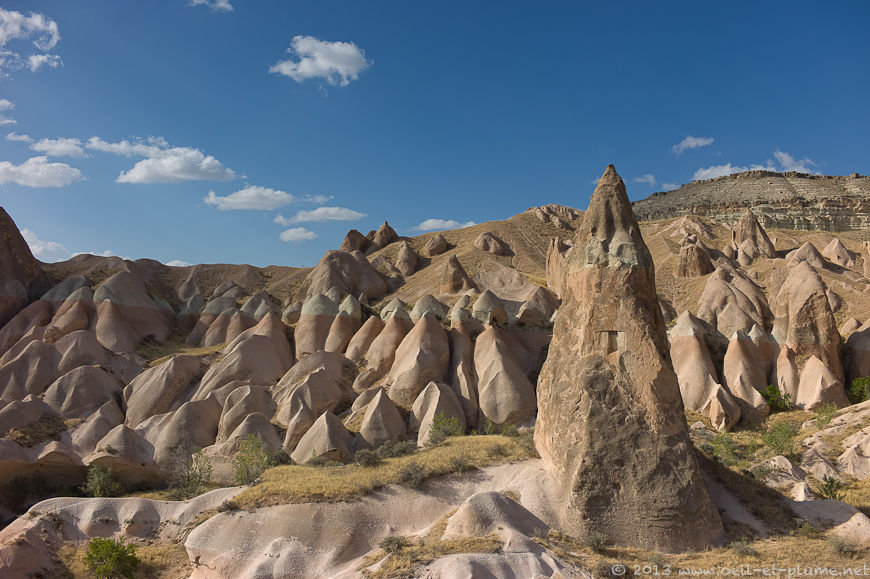 Located in central Anatolia, Cappadocia is an immense Swiss Emmental cheese sculpted with the utmost level of creativity and bored by thousands of holes. A soft cheese indeed: Most of Capadocia is made of sedimentary tuff (consolidated volcanic ash).

The natural elements first carved conical structures topped by pinnacles called ‘fairy chimneys’ by the Cappadocians. Wind and water erosion washed away the lava, sculpted and polished the tuff underneath into colour-full and odd shapes ranging from to peaks to over-sized mushrooms or even giant phalluses. 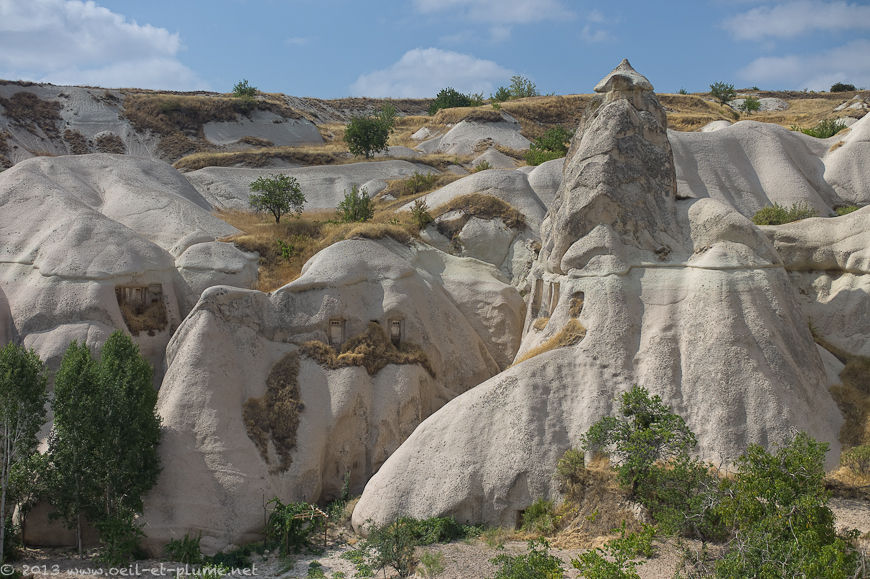 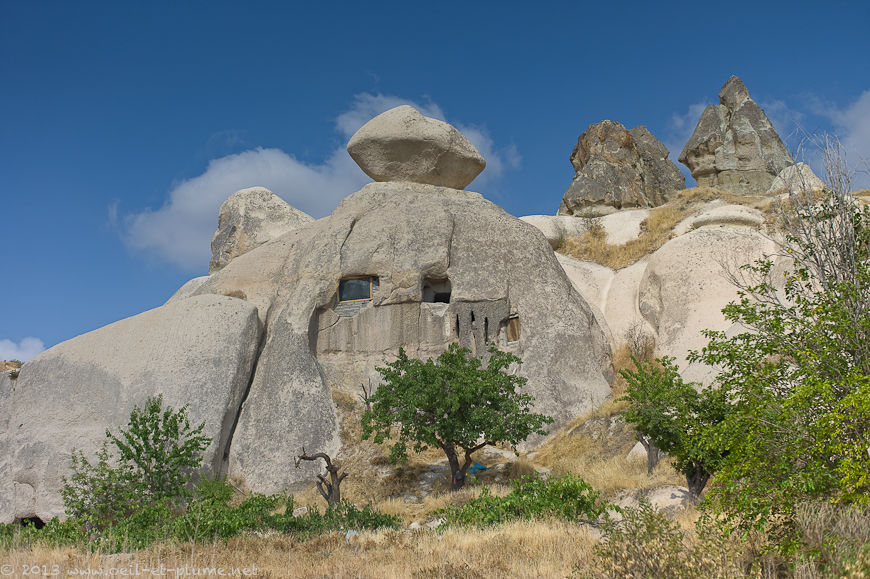 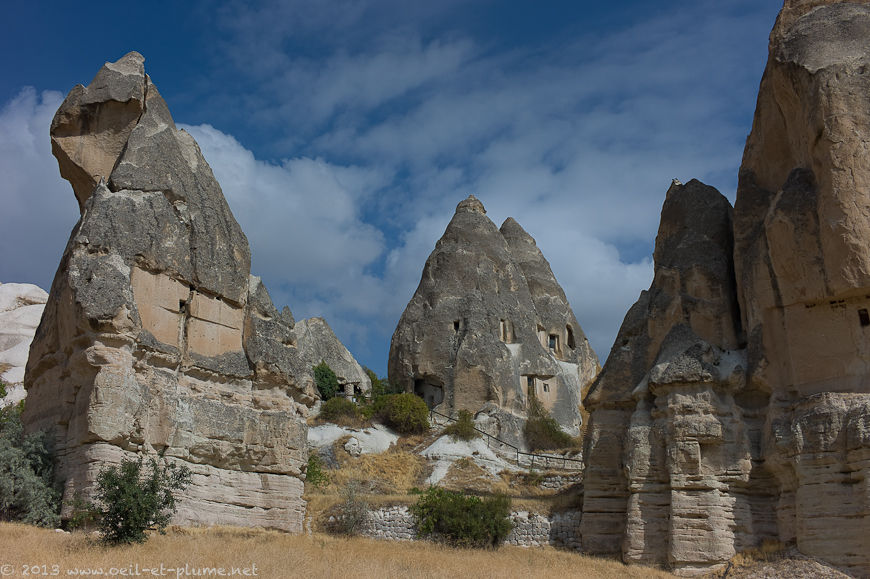 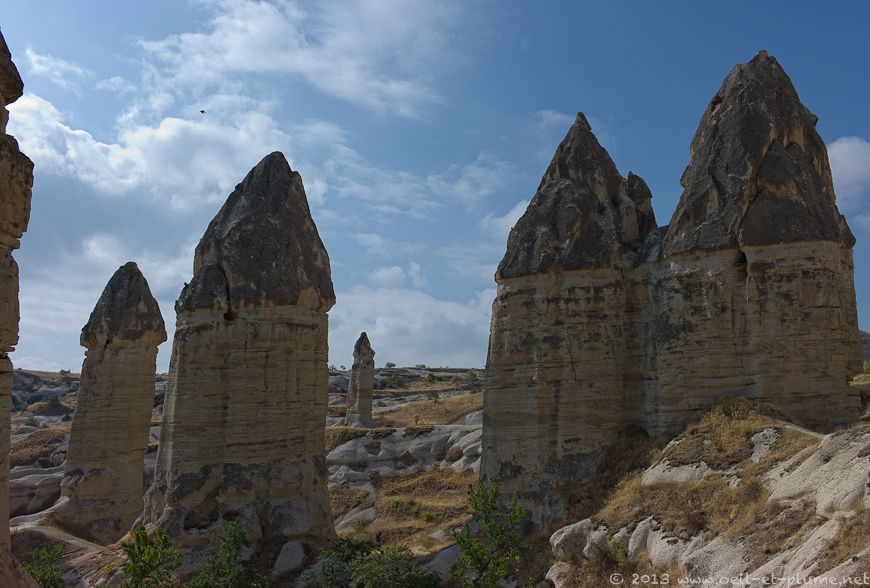 Much later, Humans started carving or enlarging caves in the soft rock. Their realisations were mostly limited in size, although large underground villages and tunnel cities were first mostly built by Hitites for defensive purposes well before our era (i.e. BCE). Defensive underground living in Cappadocia was later developed by Christians hiding from Roman armies in the first centuries CE before Christianity became an accepted religion.

Cave living was maintained in Cappadocia throughout the centuries until nowadays, because it served several purposes. Troglodyte buildings are cheaper to build given that they need no raw material. They are easier to heat and cool because of their naturally temperature-controlled atmosphere, provided that their exposition to sun, their ventilation and drainage are adequate.

Cappadocians developed over time three main types of man-made caves. First, pigeon houses. As farming was the main traditional activity in middle Anatolia until the 1970’s, they bored big rocks located next to farming land with hundreds of small holes to nest volatiles. Pigeon droppings helped fertilising the farming land. Modern-day agriculture reduced, but did not extinct this natural fertilisation technique. 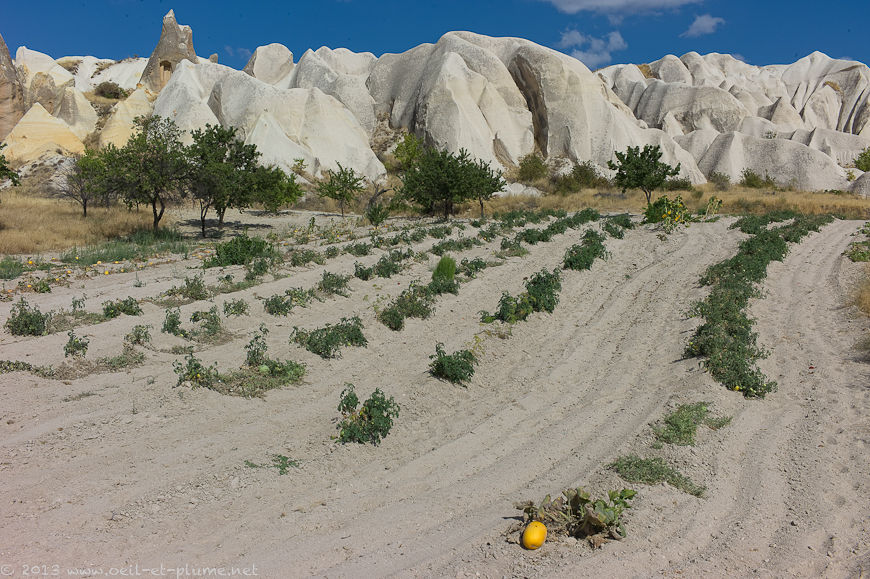 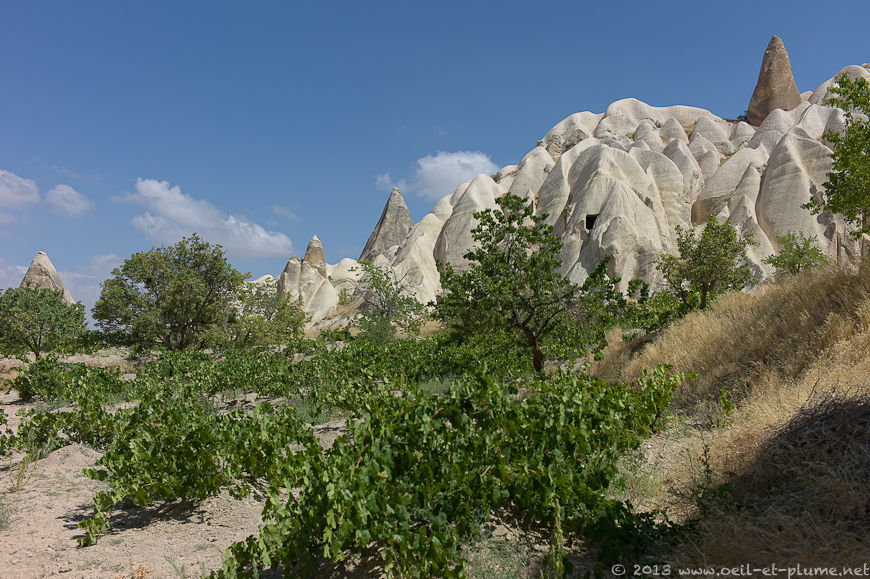 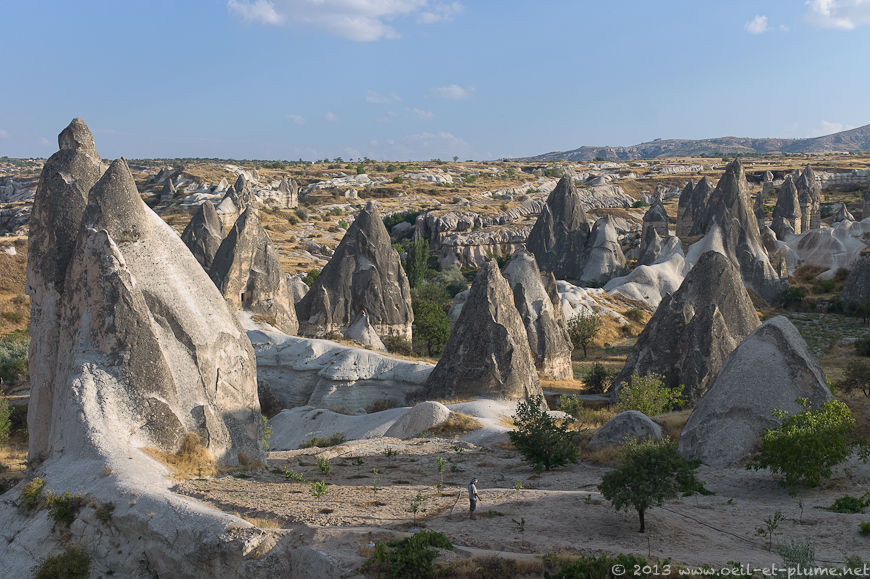 Second, man-made caves were used as churches. Göreme was an important monastic centre in central Anatolia from 4th to 13th centuries. Hundreds of cave churches were carved and often painted. Their often remote if not secret location, as well as their naturally-controlled atmosphere, favoured the good conservation of paintings. The Open Air Museum in Göreme is famous enough not to be presented here. I much preferred little-visited rock-cut churches such as these ones. 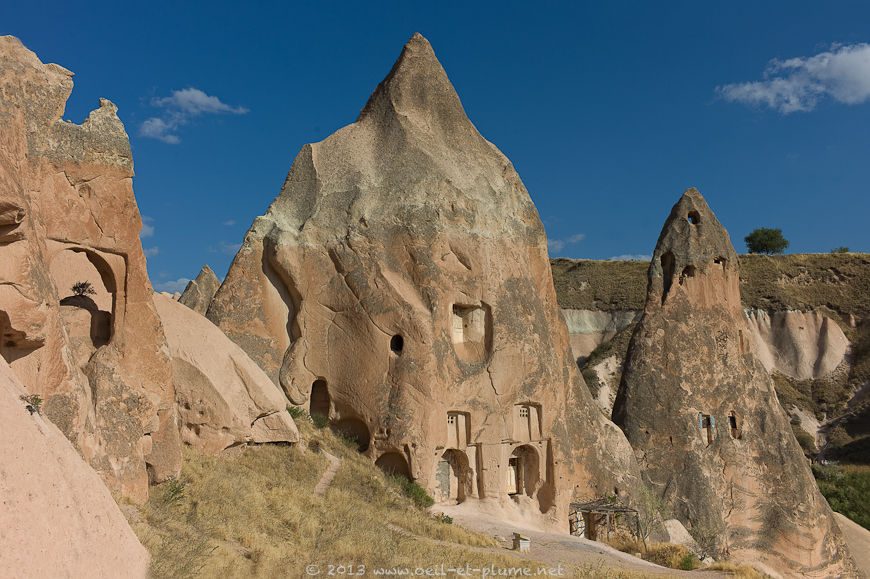 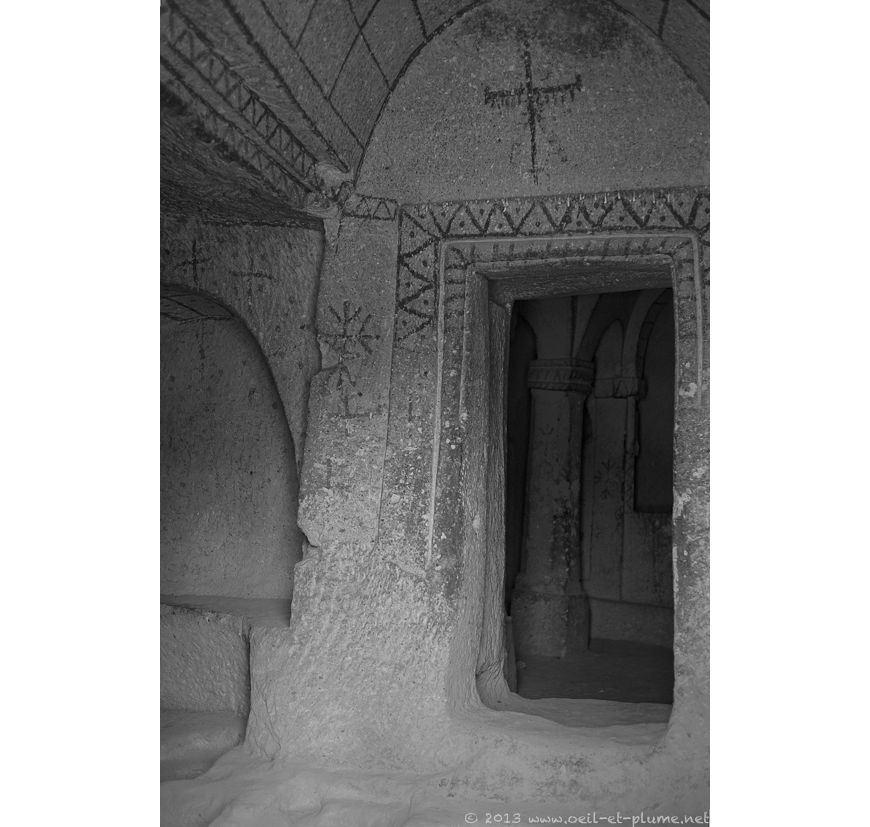 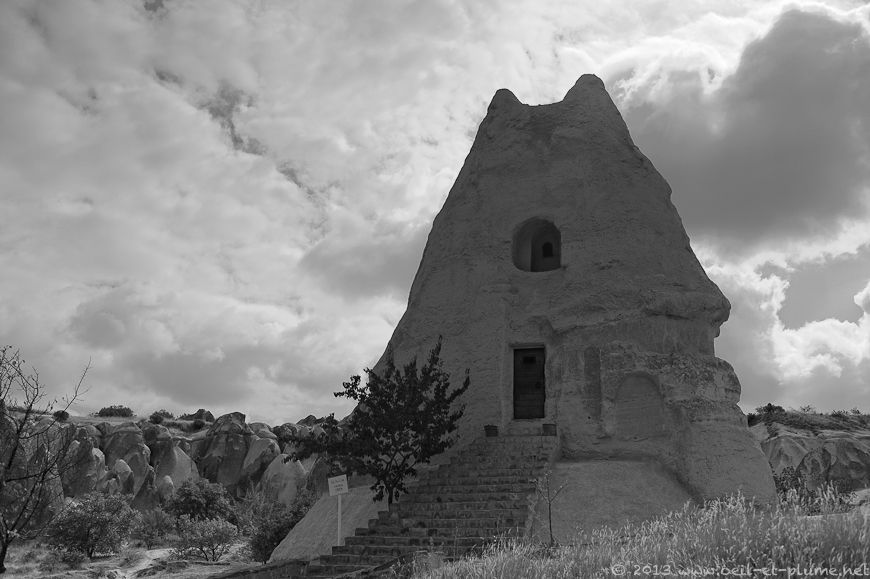 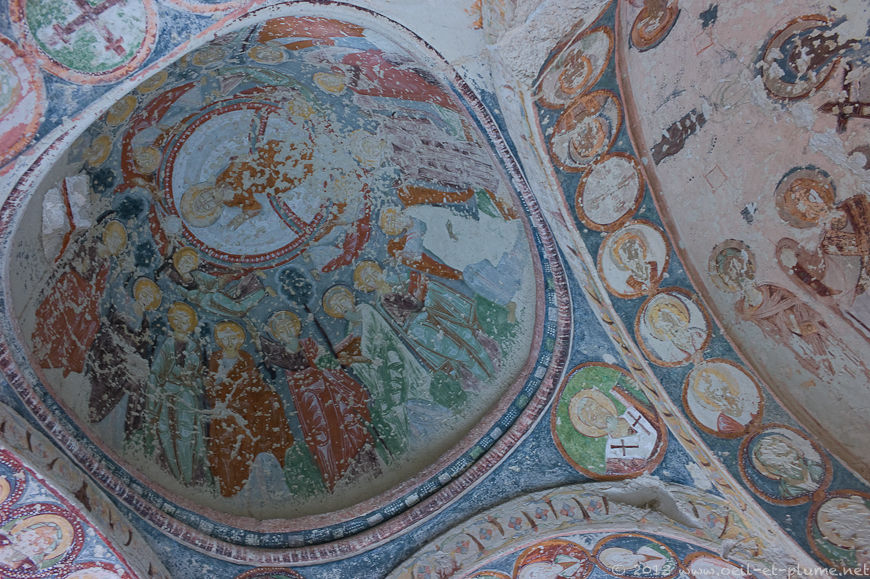 Third, Cappadocian rocks were carved into homes indeed. One in two big rocks in Cappadocia was carved into a temporary or permanent living. Most of them are small fortresses. I managed to visit one of them, far away from and well above the main trekking routes crisscrossing Göreme’s surroundings. Through my peregrinations, I reached a gorgeous moon-like plateau. 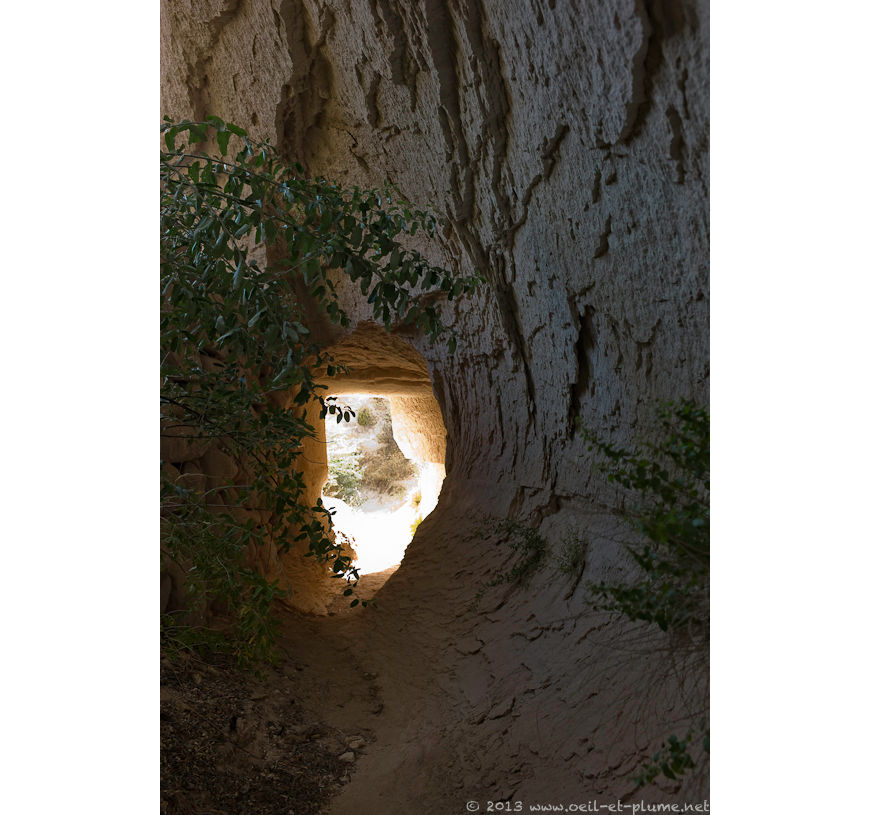 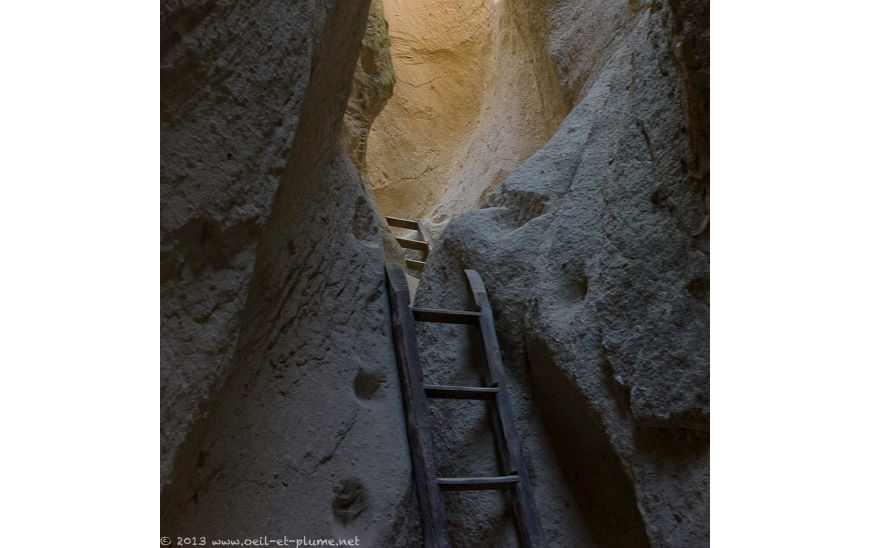 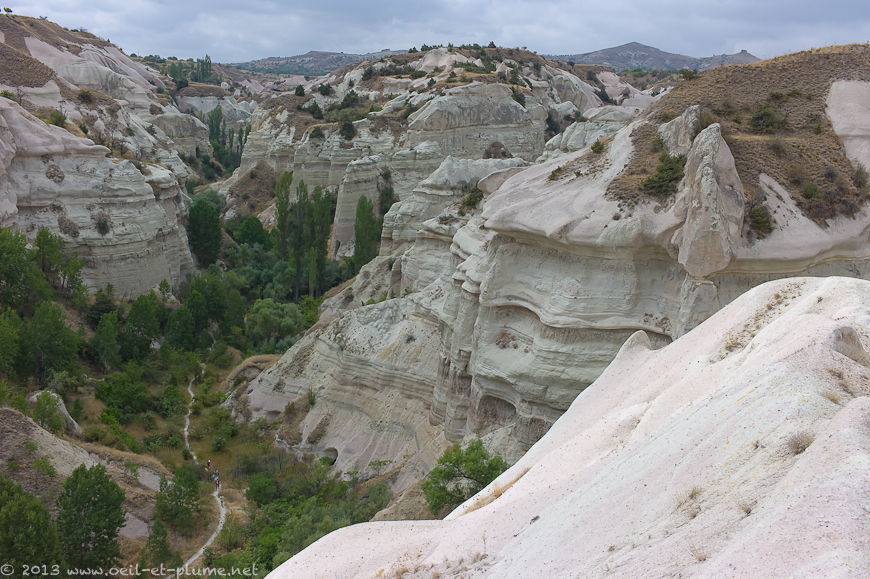 The place must be home to our romantic and eccentric dandy. The peak-shaped rock hosts a three-storey cosy home. The entrance is barely hidden by a tree. After unsuccessfully calling for anyone there, I venture inside. 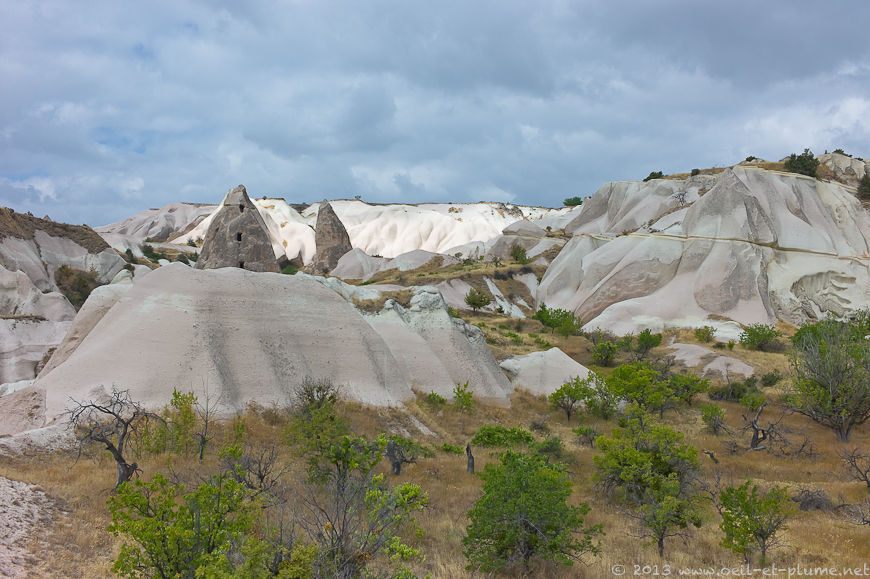 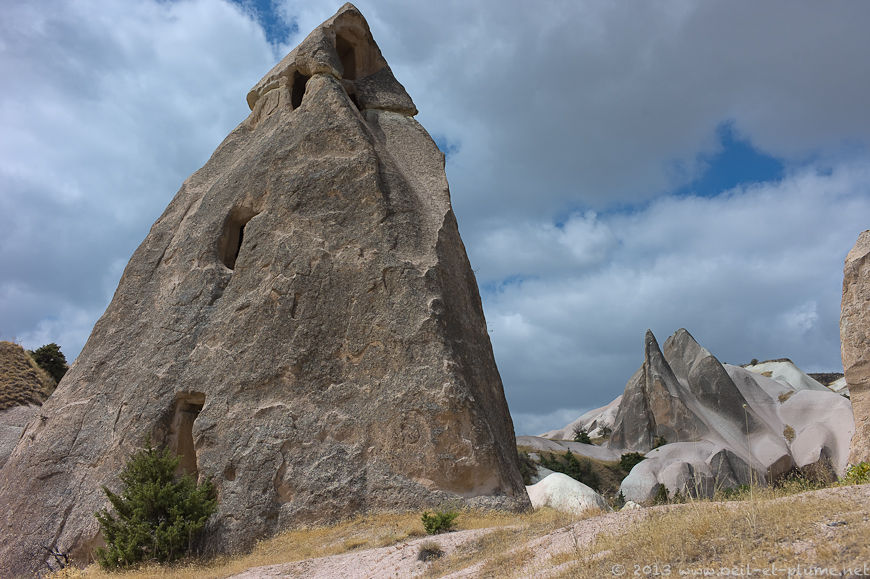 A quick climbing leads me to the first floor: a wide and comfortable living area, a spacious and ventilated kitchen, plus a food cellar. A couple of window holes ensure a natural light across the surface. In the ceiling, an exquisite but adventurous staircase carved in the rock leading to the sleeping area. Cappadocians are rock-climbers by necessity.

On the third floor, the watching posts sweep the whole area. On the first floor, the entrance door, a large round stone, provides a rock-solid barrier against intruders. I just wonder how quickly and easily this door can be shut… 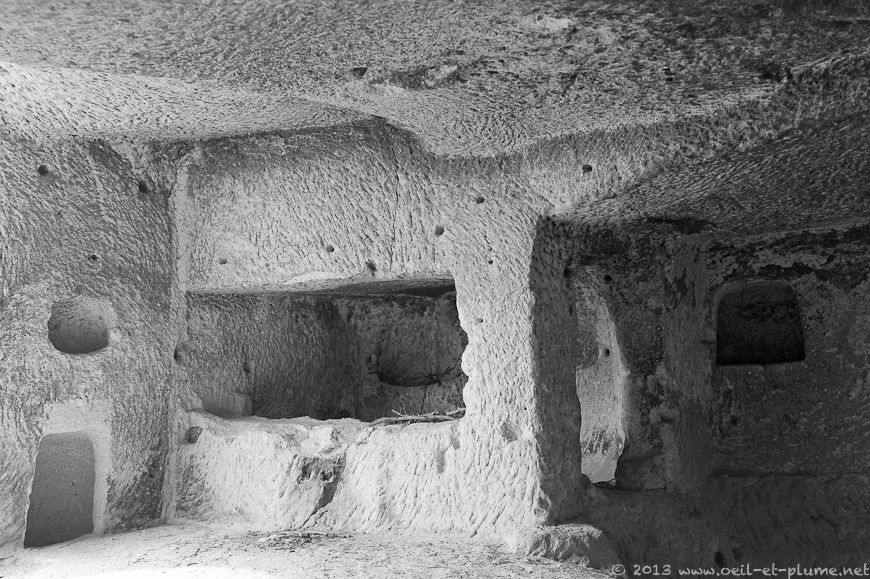 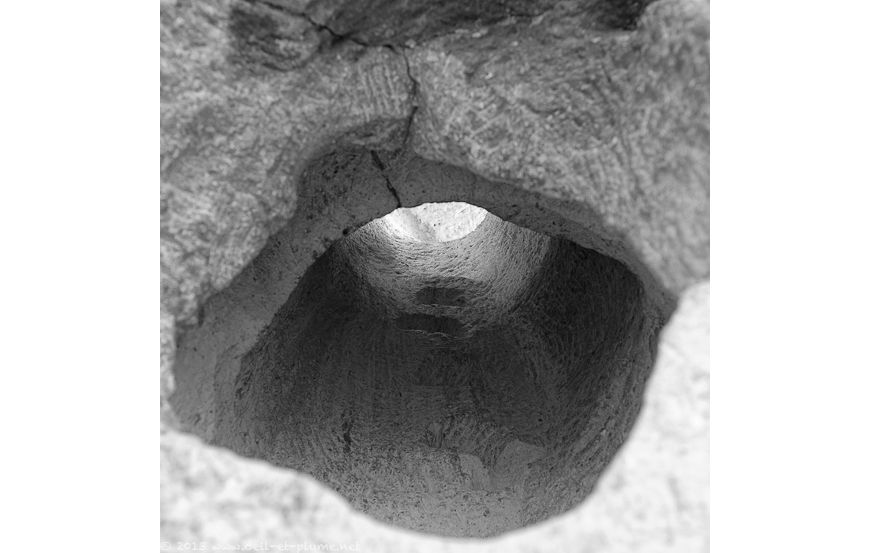 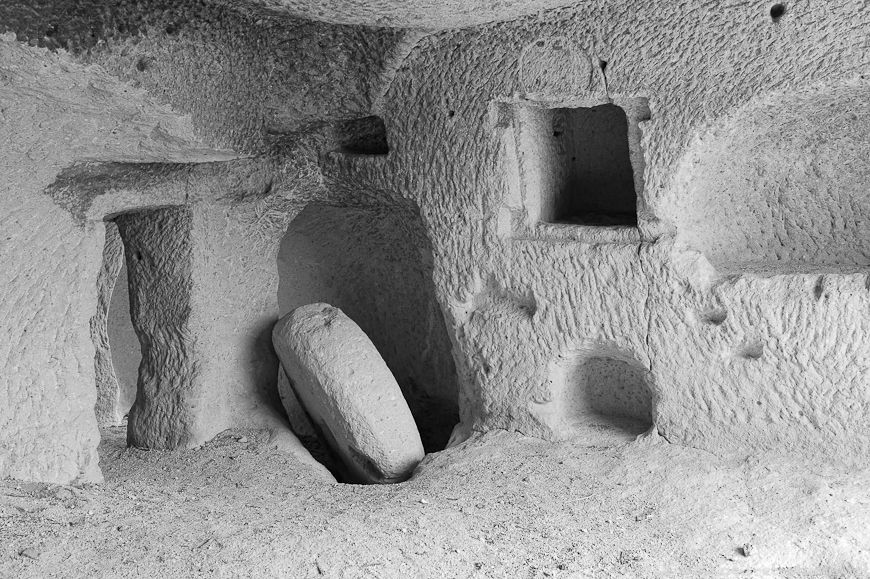 Once out of the troglodyte cave, I meet with two dogs relaxing in the shade. They do not react negatively to my presence. I take a steep staircase carved in a cliff leading to the farming area underneath the cave house. A wild rabbit runs away, surprised by my sudden presence. 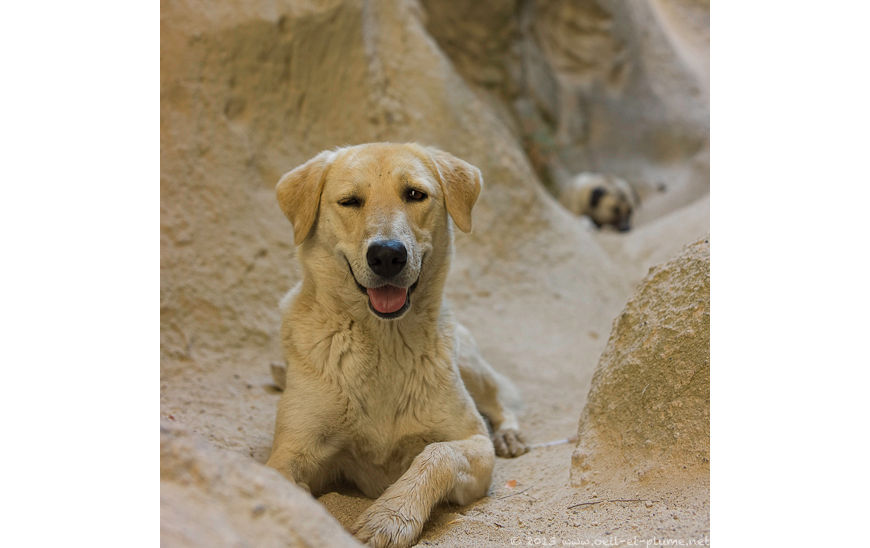 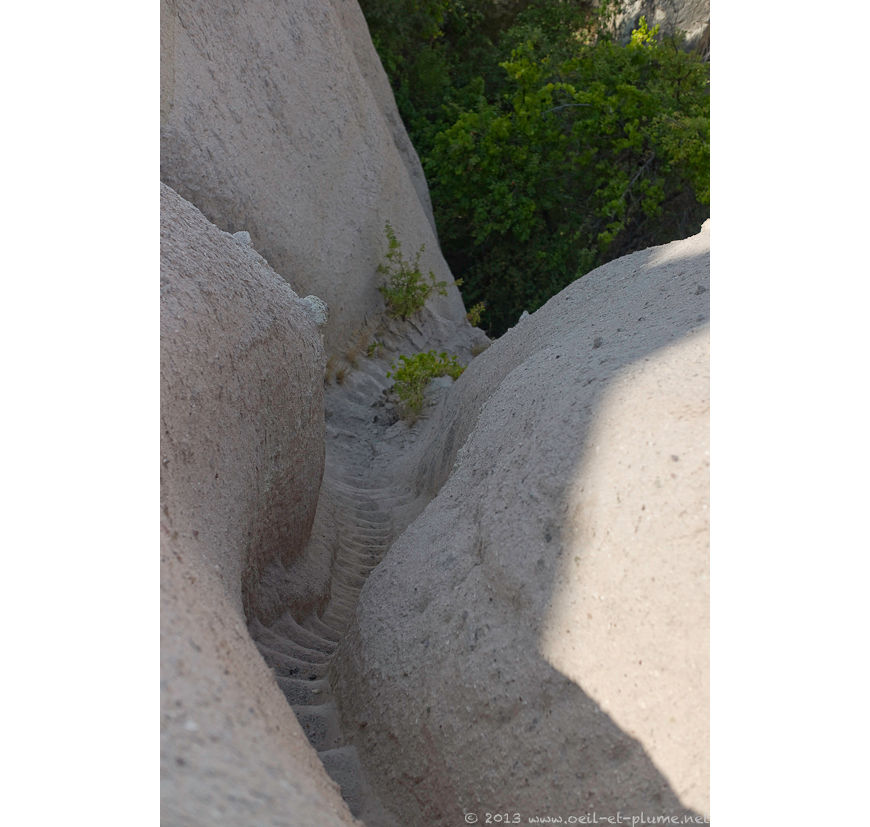 A lovely place for a lovely rural life indeed. During my impromptu visit, I look for our dandy or for his second red rose, in vain. He must be asking the hand of his fiancée in her own home. Just say ‘yes’ and come over here!

I find the couple later in the day, hiding not far from the dandy’s home. They were hiding in the Love Valley, so named for the evocative shape of its rock formations. When the daylight fades, the valley is visited not only by sportsmen in quest of some freshness, but also by lovers. Our dandy and his fiancée were sitting languorously and laughing loud their happiness. 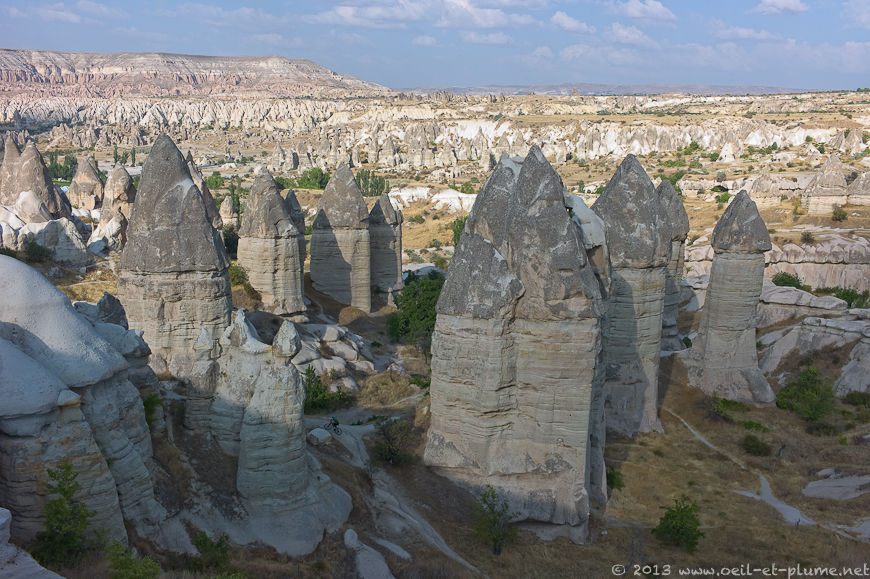 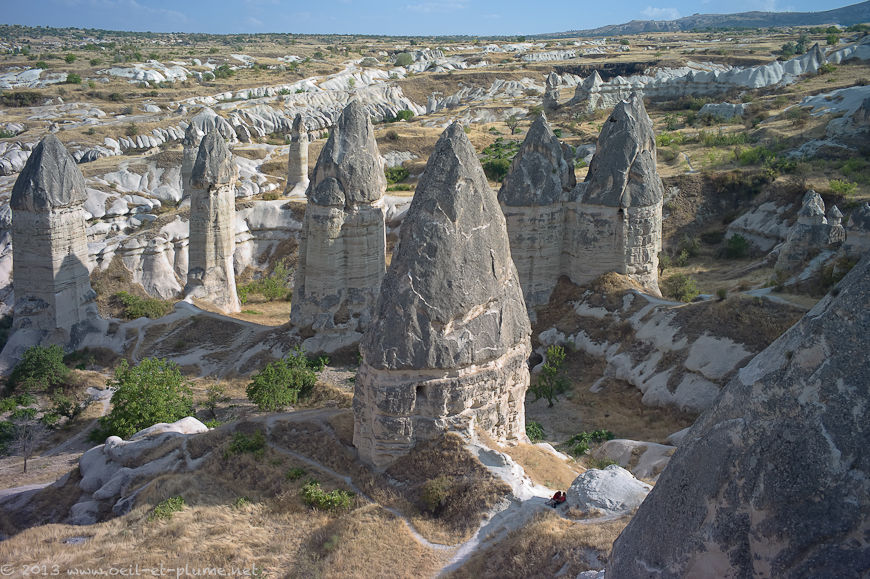 I shoot discretely a couple of pictures and left, happy about this happy end. Long life to our Cappadocian dandy and to his love!