From Matsumoto, I head to Nara. The small town near Kyoto was the first permanent imperial capital of Japan in the 8th century.

Until the 8th century, the capital town of the burgeoning Japanese empire uses to change after each emperor’s death, in accordance to Shinto taboos.

In 710, the imperial capital is moved from Asuka to Nara and bound to remain there. Out of a loose confederation of small clan chiefdoms, the Nara Period witnesses the emergence of a strong centralised state in Japan, inspired by the Tang Dynasty in China.

Nara city is modelled on Xian, the Chinese imperial capital. The Nara court regularly sends diplomatic envoys, civil servants, engineers and Buddhist monks to study in China. They are often promoted to key governmental positions upon their return in Japan.

The Nara Period is considered as a golden cultural age in Japan’s history. It produces the first national histories and major poetic compilations. Although already present in Japan since the 6th century, Buddhism is strongly established as one pillar of the new imperial rule and institutions in Nara.

The Nara imperial family remains not unchallenged, with the Buddhist clergy and the regents in charge of the civil administration as main contenders. In the late 8th century, the imperial capital is moved away from Nara to escape the Buddhist clergy. In 794, it is established in Kyoto, long before it is moved to Tokyo in the 19th century.

In sum, Japan’s nation-state building proved to be an historical and geographical marathon.

I happen to visit Nara during the weekend of the 2013 marathon. No doubt, we are in Japan. Jogging is extremely popular in the archipelago, probably more than in western countries nowadays. Not only popular but also elite runners display this unique Japanese combination of rigor and humour. 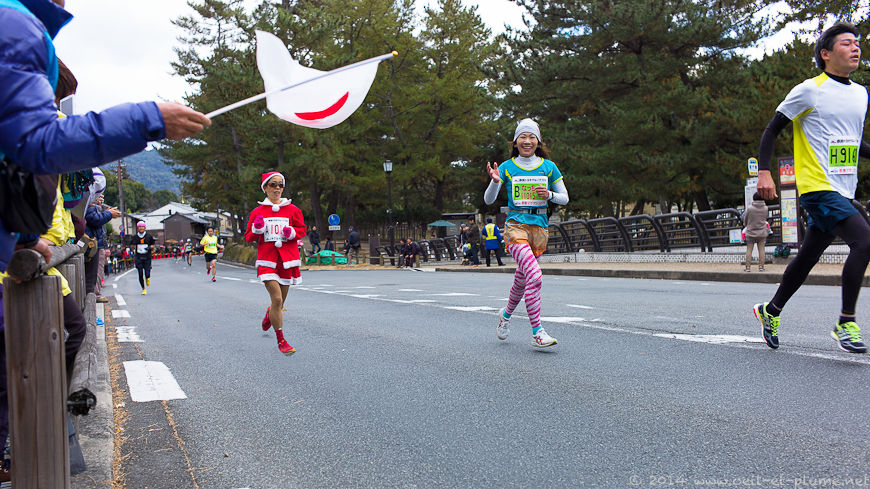 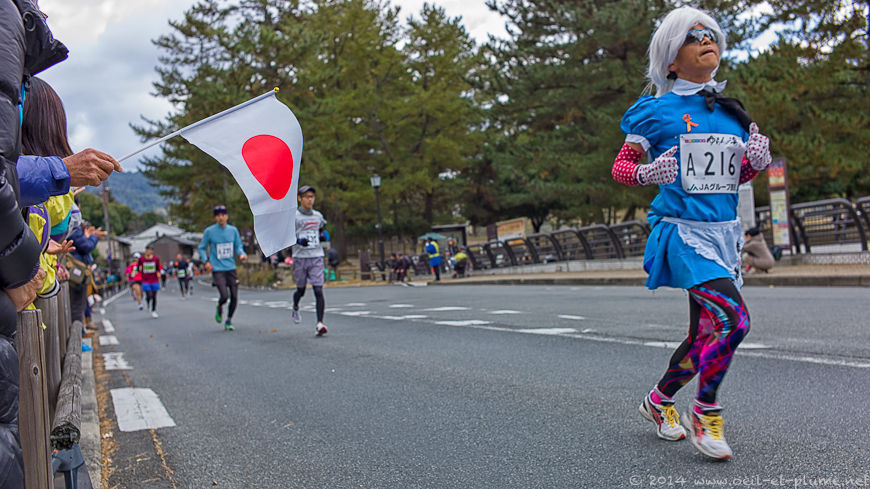 The Nara marathon provides a truly unique feature of long-distance running in Japan. It crosses a large natural park, also a sacred forest, studded with many major and well-preserved historical sites.

The Nara Park hosts also some 1,200 wild deer – animals considered as God’s messengers. According to a local legend, one of the major shrines in Nara was founded as a family shrine by a powerful Nara clan in the 8th century. The aristocratic family invited a mighty god living in a distant shrine to visit and reside in their own shrine. The god came to Nara riding a white deer. This is maybe why the Nara deer are familiar with the road traffic rules and keen to get premium food for free. 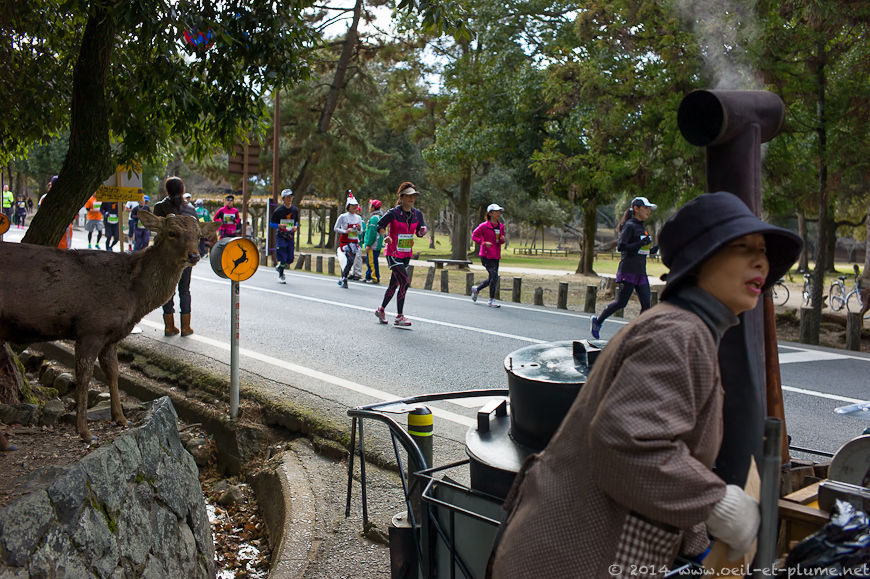 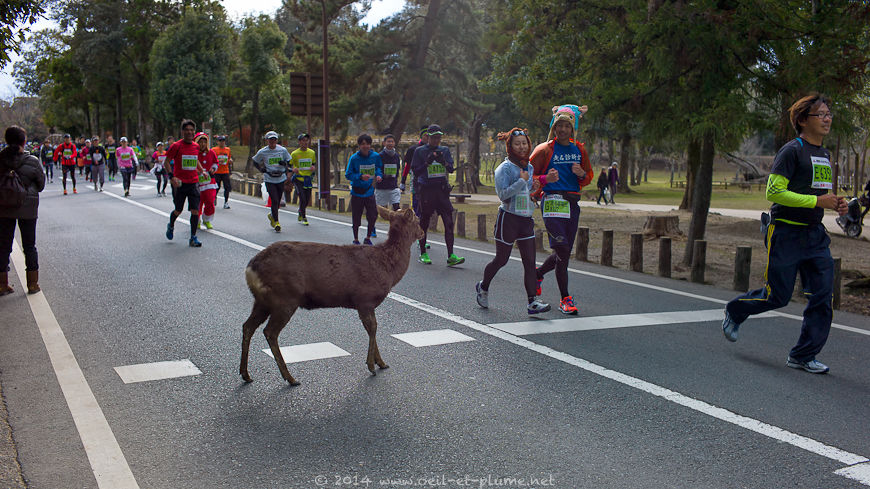 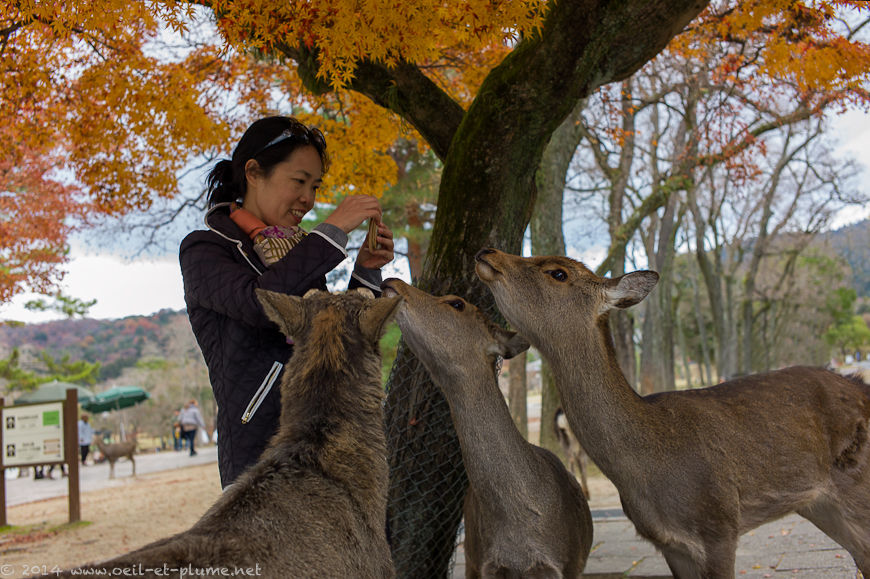 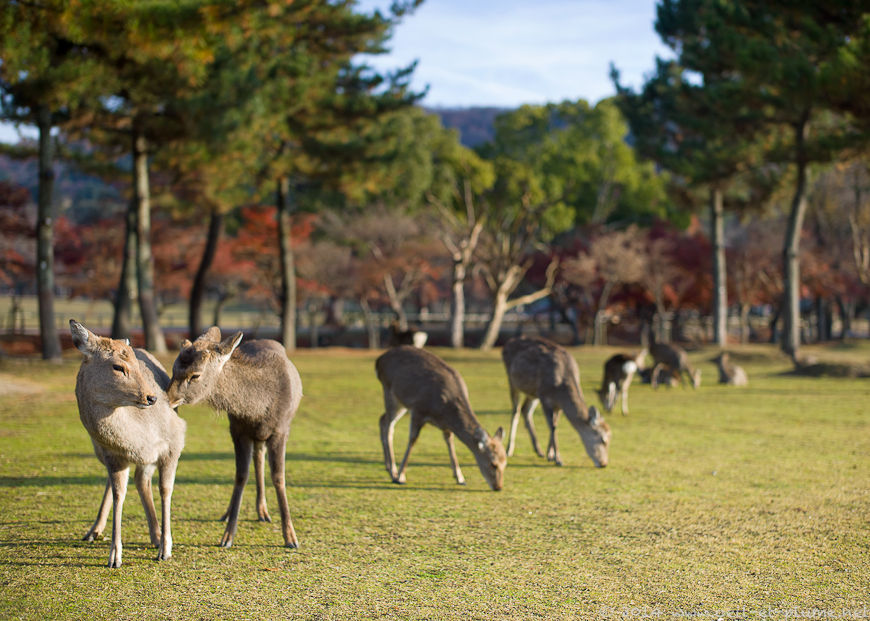 Nara is mostly known for the Great Buddha (Daibutsu) meditating in Todaiji Temple. As usually for major attractions, I visit the place rather quickly outside of peak hours. The Todaiji Temple – although nowadays only two-third of its original dimensions – is still one of the largest wooden buildings in the world. 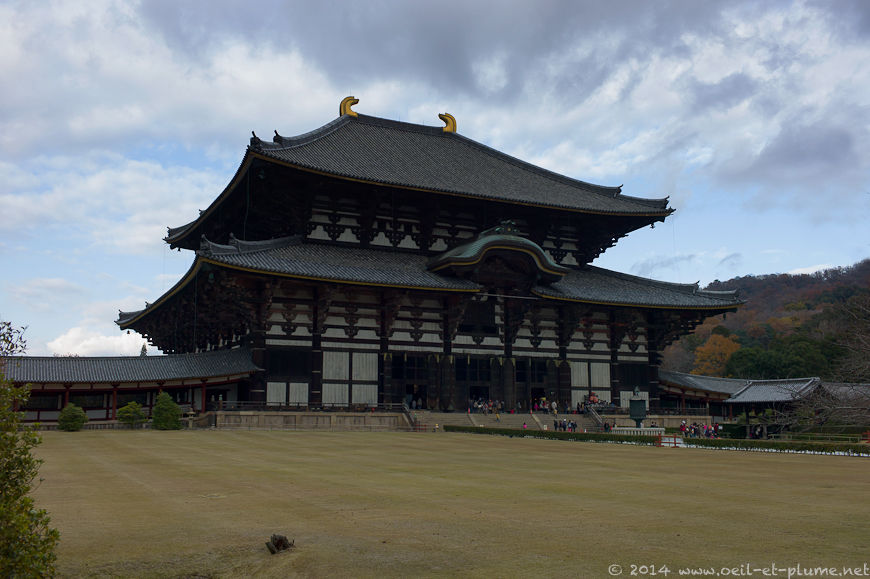 The gigantic bronze-and-gold cosmic Buddha is impressive indeed. It was casted in the 8th century to consolidate the imperial power and promote Buddhism in Nara, maybe also as a charm against smallpox that ravaged Japan at that time. It cost so much that it brought the Nara imperial court at the verge of bankruptcy. 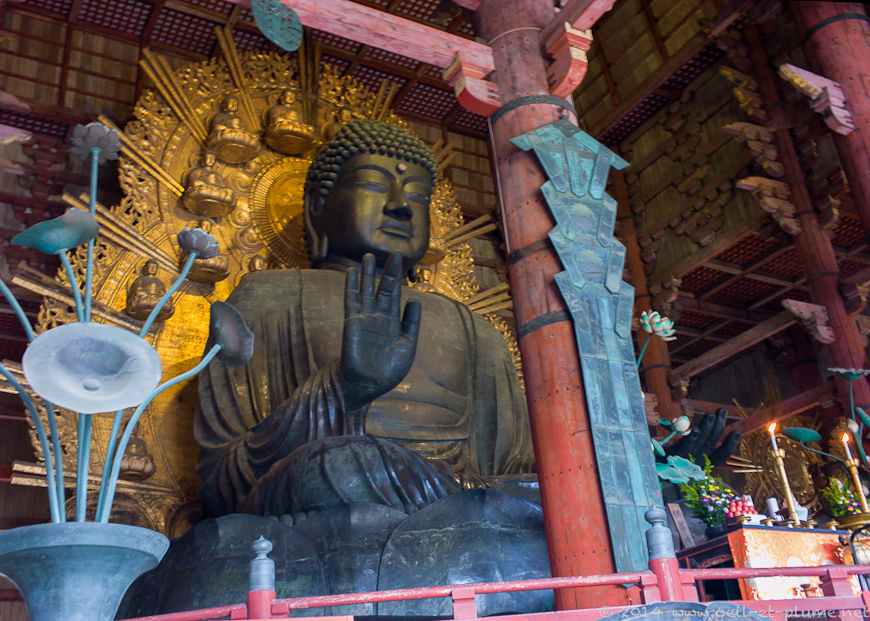 All considered, I much prefer the finely carved Nio guardians who monitor closely the flow of visitors in Todaiji Temple. This is where I spend most of my visit. Other And secondary statues attract my attention as well. 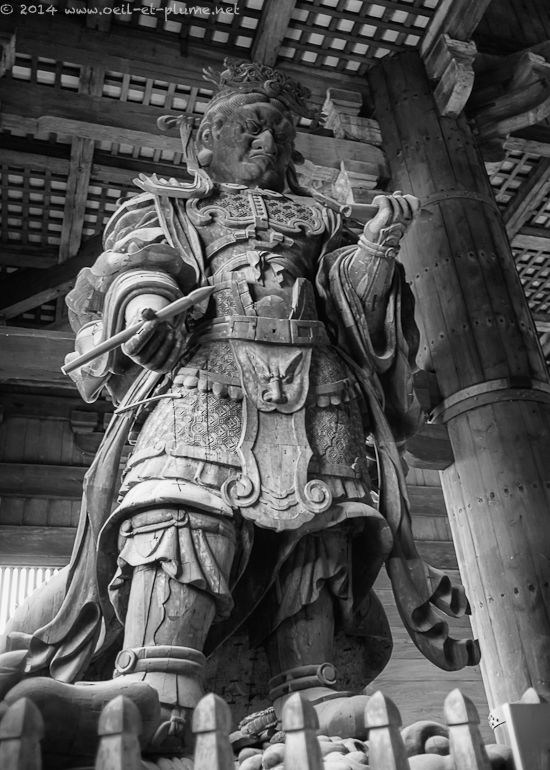 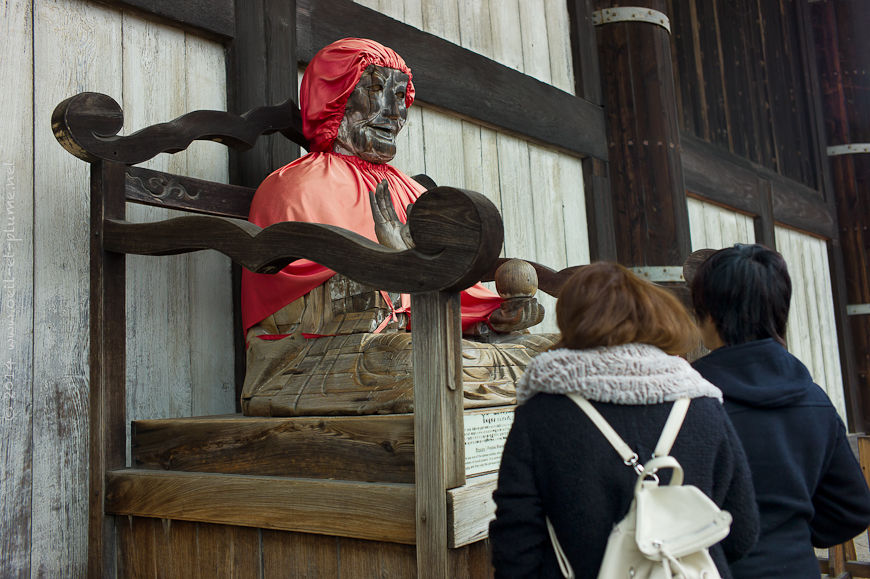 There are too many splendid Buddhist temples located in Nara Park to present them all here. Suffice to outline hereafter what could be the main spots of your forthcoming visit there. 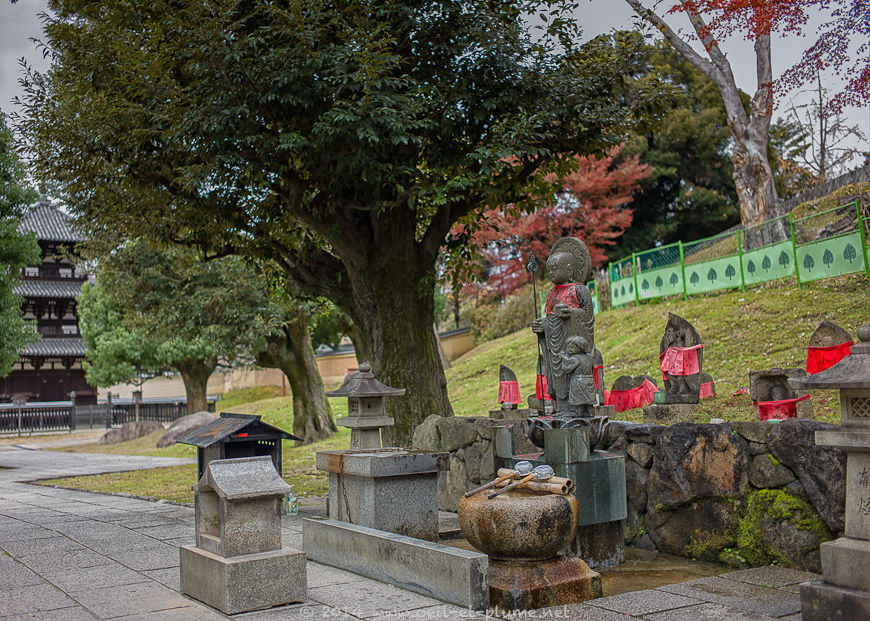 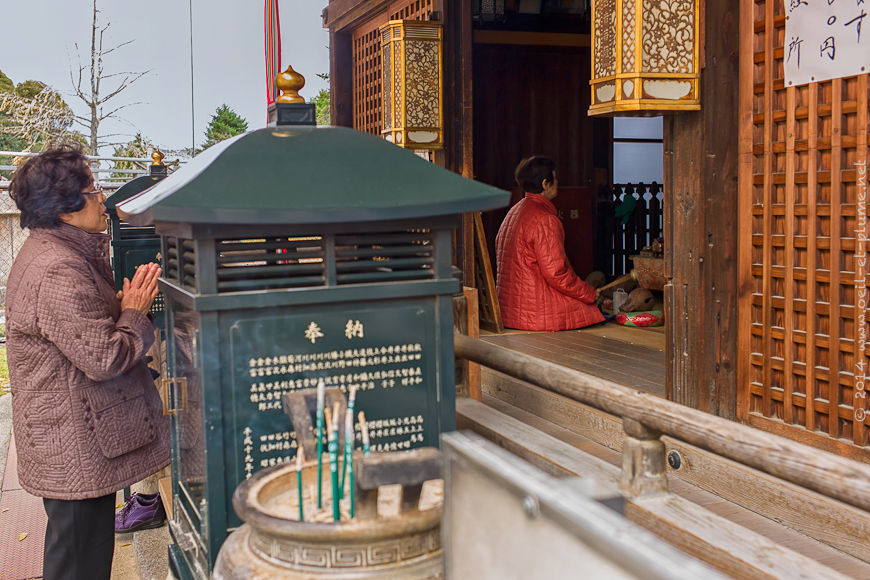 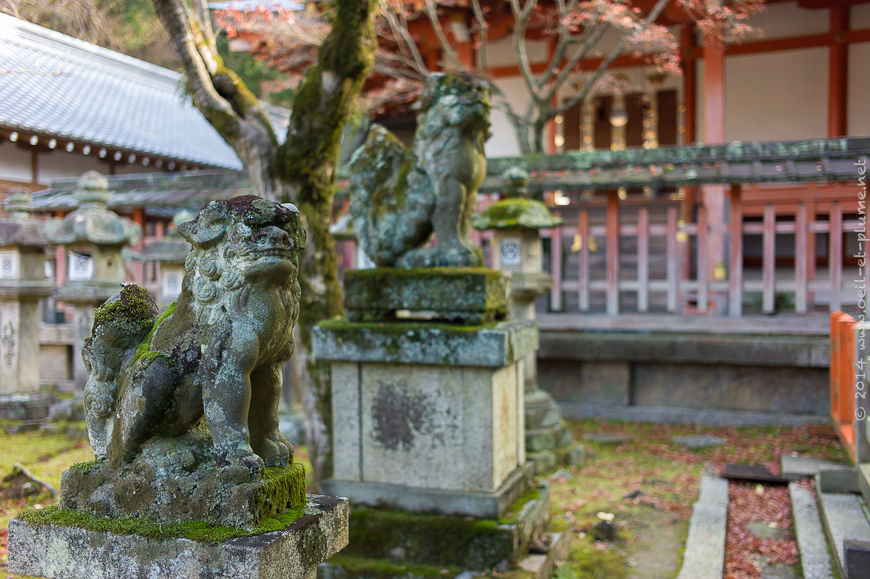 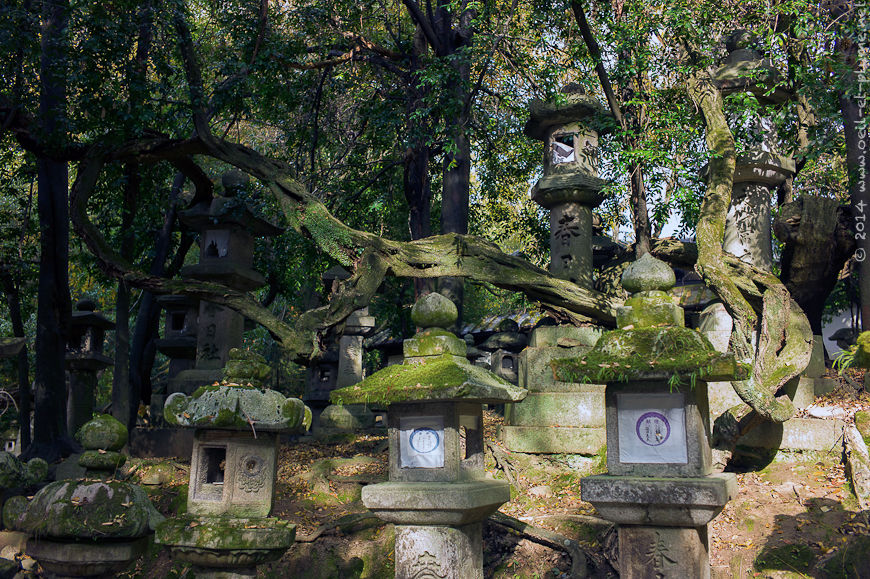 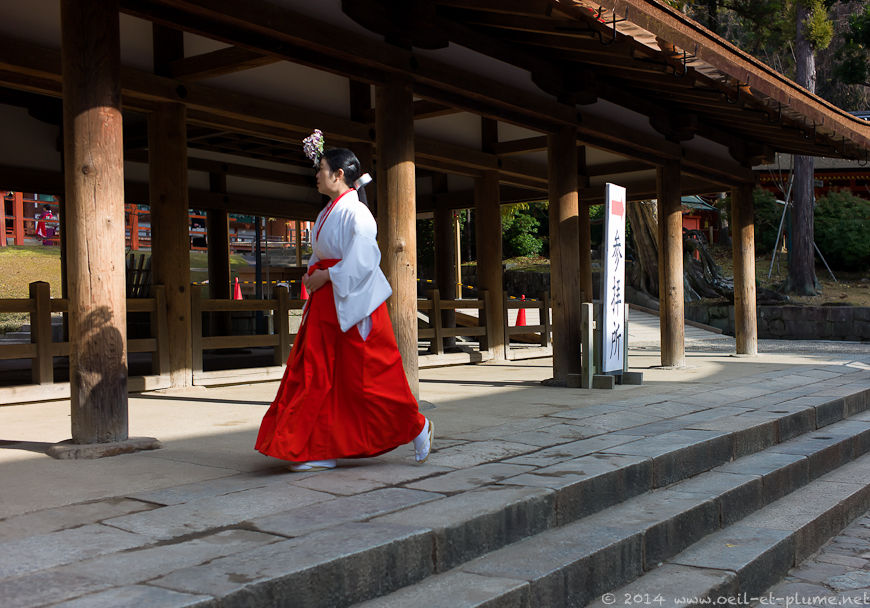 The Nigatsudo Hall is indubitably my favourite temple in Nara. I visit the place before anybody else on that morning. The aesthetics of the wooden building and its surroundings is stunning. Furthermore, the temple perspires an intimate spirituality that I did not find elsewhere in Nara. 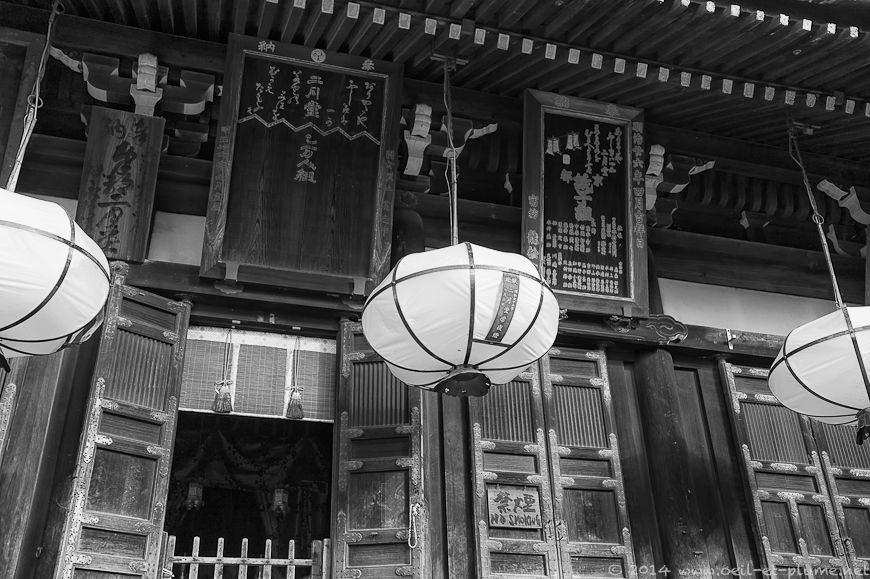 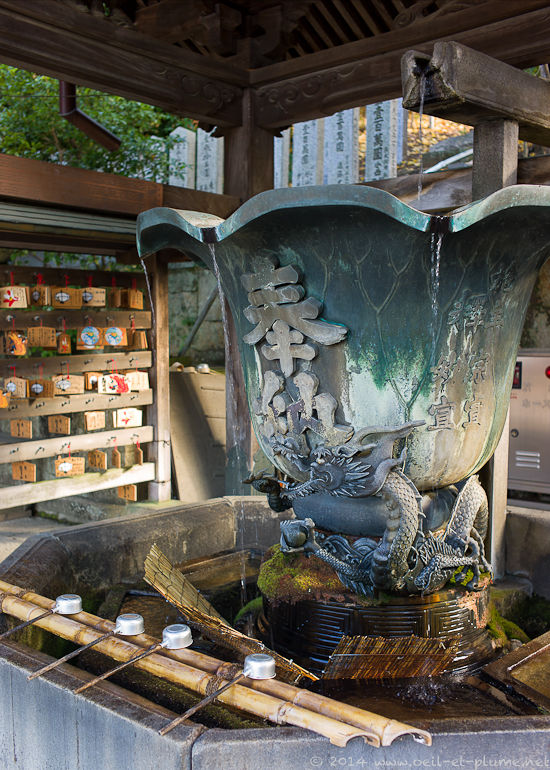 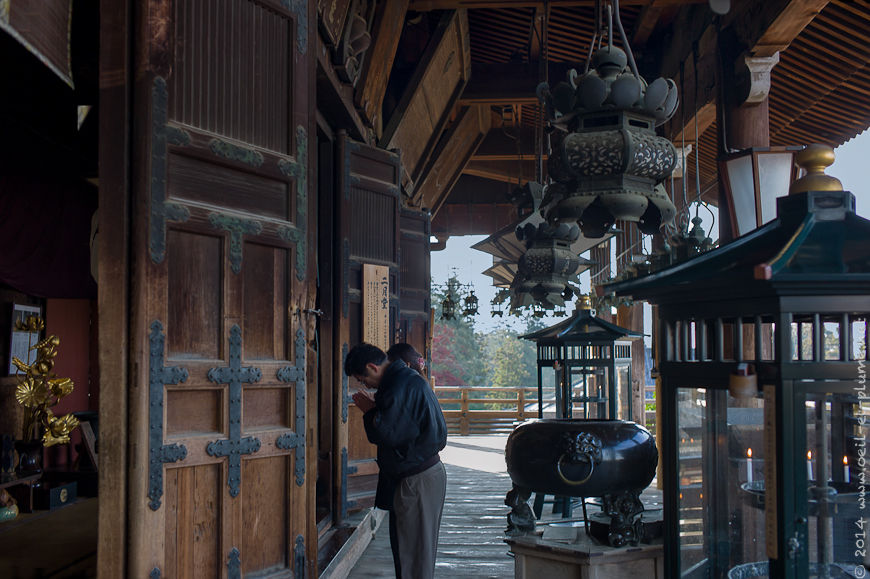 You may think that I embellish much the places visited, that I depict and paint the reality with excessively positive words and charming colours, that I post-process too heavily my photographs.

I don’t think so. There is no such thing as ‘the reality’ when it comes to reporting situations and emotions. There are only as many subjective approximations of ‘the reality’ as there are people looking at the matter.

Doubtful? Look at this painter: are his colours excessive to translate ‘the reality’? His palette is just fine to express his artistic vision of the Nara Park. Albeit post-processed, my pictures are much softer in tones than the painter’s palette, and probably different from yours. 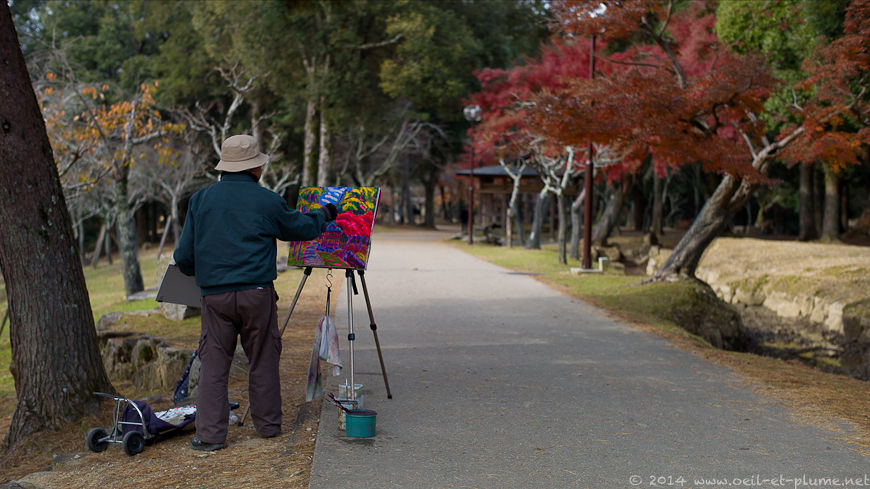 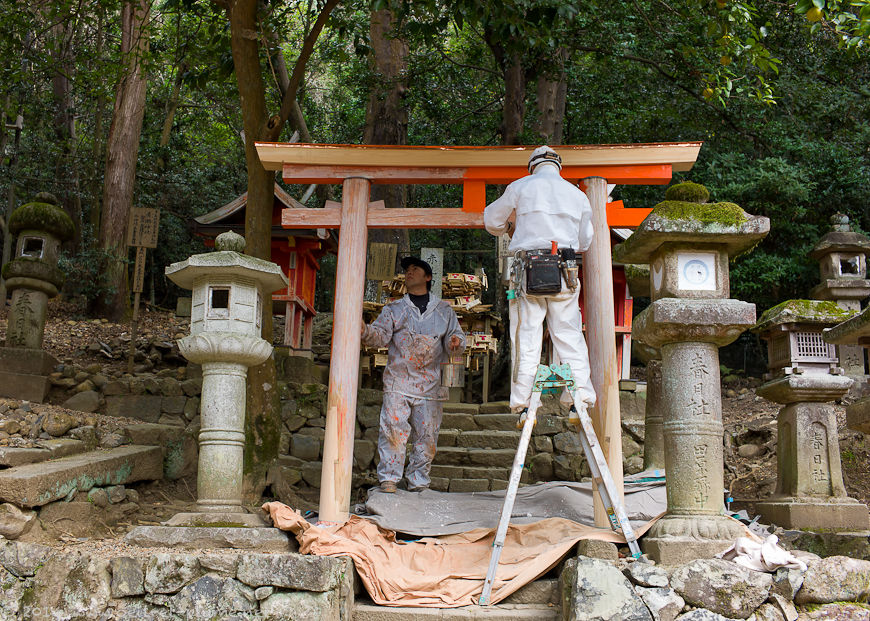 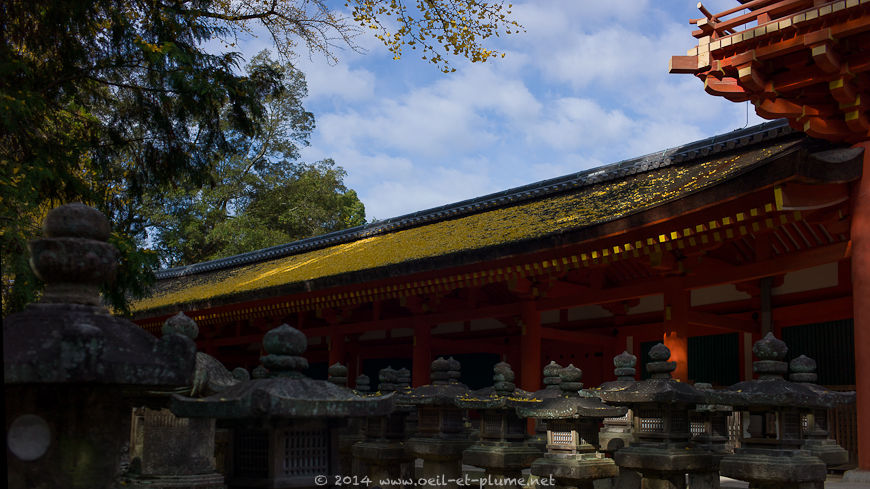 What really matters is that you visit Nara with no delay and bring back your own vision of this natural and historical gem. So will be your Nara marathon.