For long time, I did not consider visiting Japan. I did so recently and I am glad I did it.

My first encounter with Japan happened during my teenage through the seminal Kagemusha movie created in 1980 by Akira Kurosawa. No need to present you the iconic Japanese film director. I still remember having watched Kagemusha film again and again, fascinated by the hundreds of infantry and horse men fighting fiercely with their clan flag floating in their back above their head.

I have luckily revised my fascination by Japanese medieval warfare since my teenage. However, I paid tribute to Kagemusha by starting my Japanese journey in a castle close to, and contemporary of the historical scene depicted in the film. Moreover, the fortress belonged in those times successively to the two main warring parties in Kurosawa’s movie.

Kagemusha means literally ‘shadow warrior’. The Japanese term depicts a political decoy. Kurosawa’s movie is set near Kyoto in central Japan during the troubled Warring States (Sengoku) period (mid-15th to early 17th century). An obscure criminal is tasked to impersonate Shingen Takeda, a warlord who just died while leading the military siege of the fortress of the Tokugawa clan.

Shingen Takeda is mortally wounded by sniper gunfire near the besieged castle. He had come nightly to the battle field to listen to a mysterious flute music that his troops used to hear at night. His generals hastily organise a political decoy to occult the weakened leadership of the Takeda clan to its Tokugawa foes. The shadow warrior performs very well, confounding even the first circle of the defunct warlord until he attempts to ride Shingen’s spirited horse. He falls down from the horse and the decoy is unveiled.

Singhen’s son takes over the leadership of the Takeda clan and leads his army in a disastrous attack against the Nobunaga clan ruling the imperial capital Kyoto. The shadow warrior dies on the battlefield alongside thousands of Takeda troops. The 1575 battle of Nagashino is the scene of Kagemusha movie that marked my teenager’s memory.

Hence, I start my Japanese journey by visiting the Matsumoto Castle, one of the finest historic castles in Japan. Built in the early 16th century, the fortress came to the rule of Takedas in 1550 before falling into the hands of the Tokugawa clan. 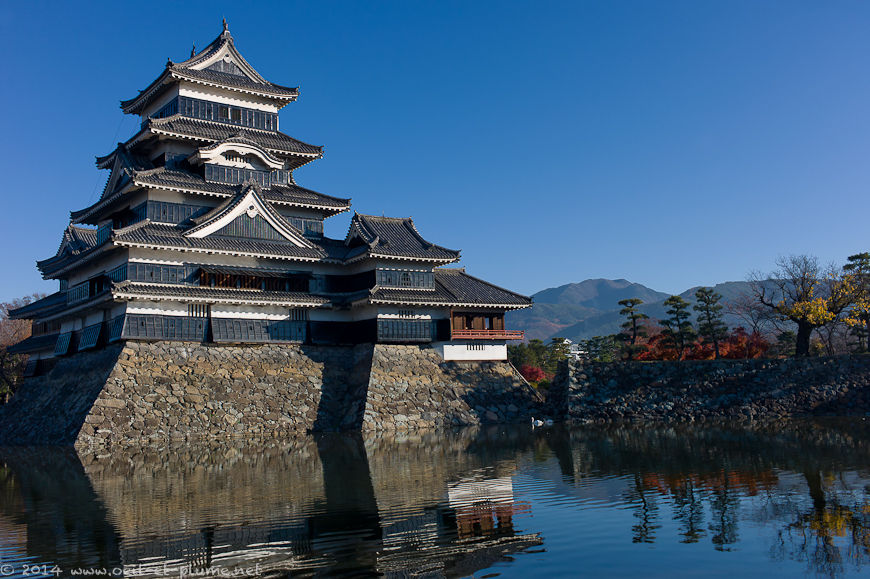 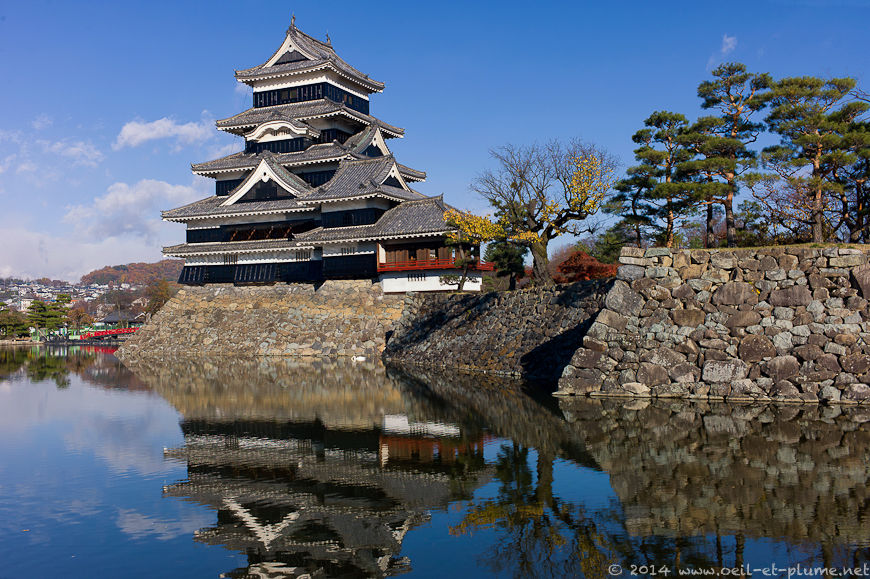 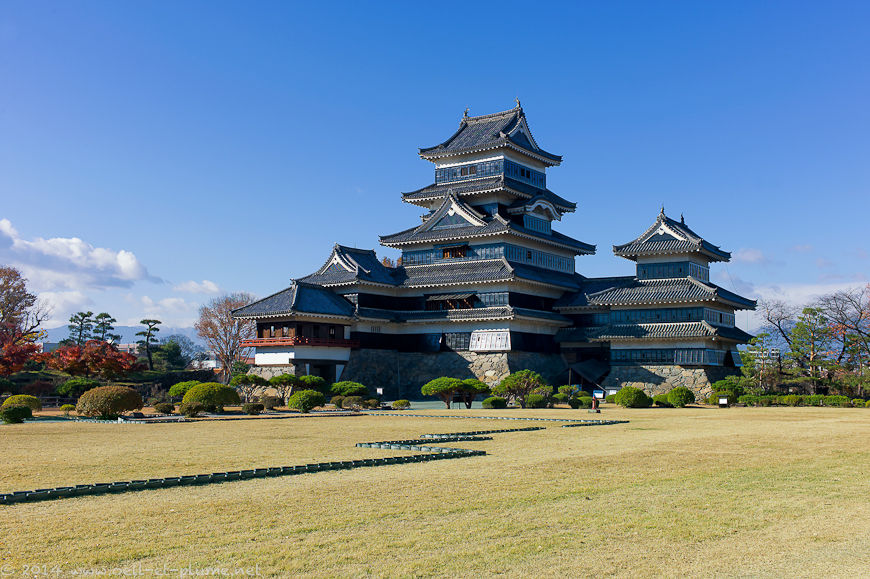 I visit the fortress every morning of my stay in Matsomoto. No need to be a military fan to appreciate the beauty of the site in a soft autumn light. Nicknamed the Crow Castle for its dark colour, the military complex still displays its original external stonework and wooden interiors. The rest of the defensive building was rebuilt in the 20th century.

Inside, the wooden carpentry is polished like a gem. Obsessed about warfare, the six-storey fort is highly functional with little amenities and comfort, as dark as it is iced-cold in late autumn already. Only one room at the very top of the fort allows itself the fantasy of a moon observatory.  The main residence and administrative buildings, erected on what is today an empty lawn space, did not survive to the troubled 18th century.

To complete my Kagemusha tribute, I visit the home of the famous Takahashi samurai family in Matsumoto. The modest house has little to compare to the sober but astonishing architectural elegance of the Crow Castle. Despite being economically insignificant, the samurai class profoundly shaped Japanese warfare and collective mindset until recent times. 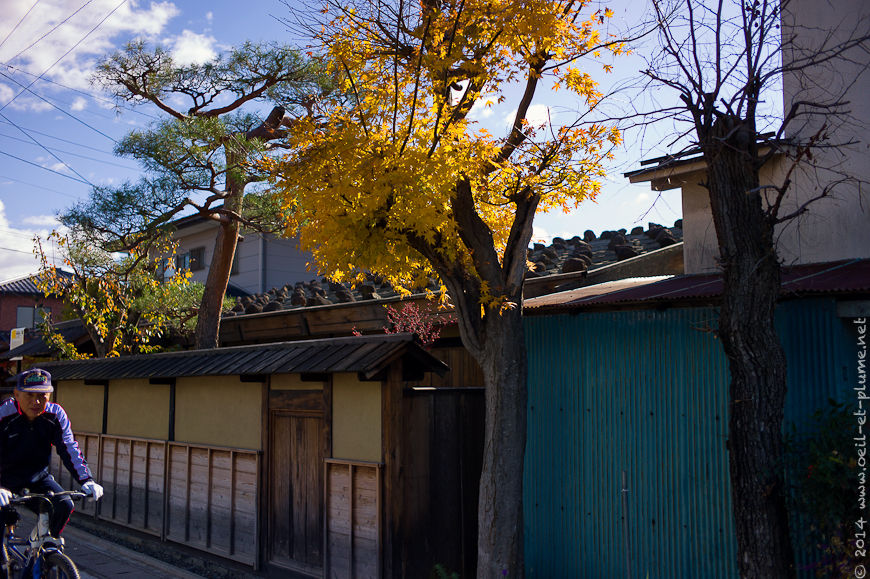 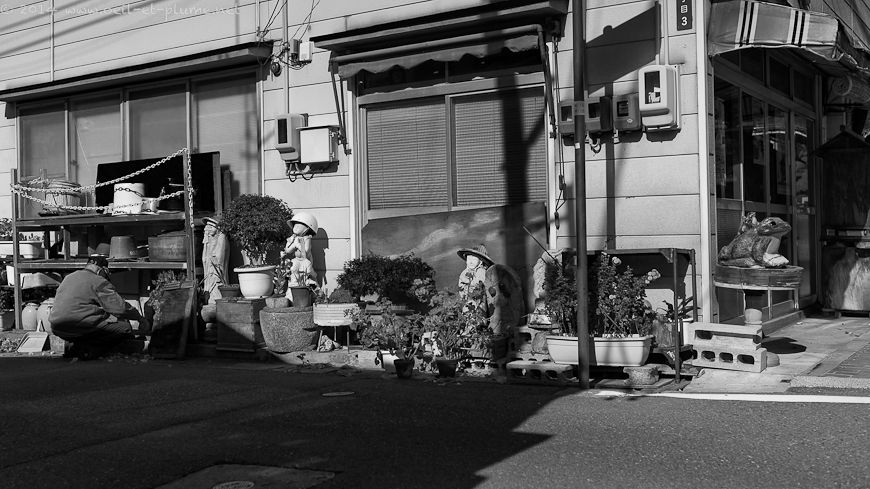 Matsumoto has much more to offer to the visitor than a mere display of military architecture. The town is set a beautiful mountainous area called the Swiss Alps. Good start indeed.

I stay at a small traditional Japanese hostel (rokyan) in the former merchant district, crisscrossed by lovely small streets running along or across a river. I enjoy much wearing a tidy kimono every night following a steam bath, only to sit on a vegetal mat (tatami) and to savour my multiple-course dinner. Incredibly refined food indeed. 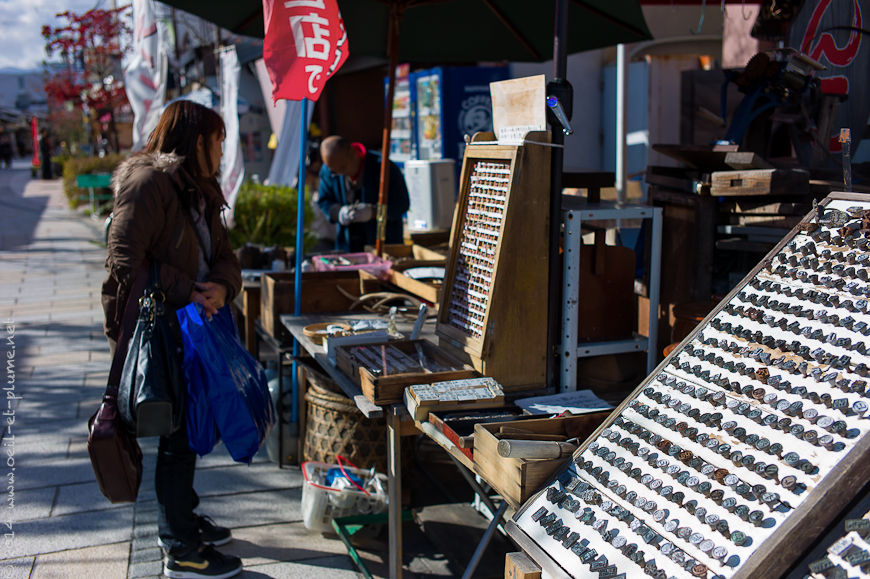 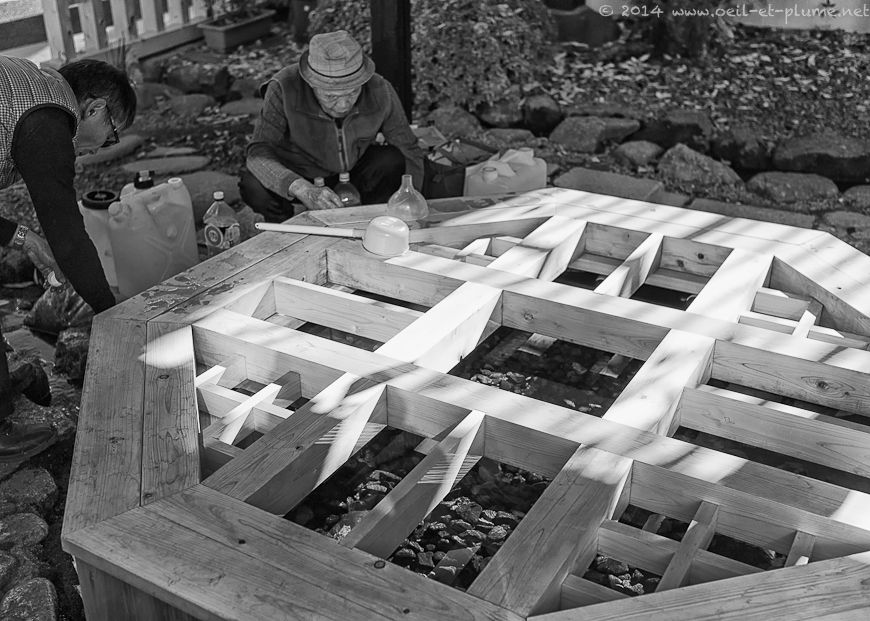 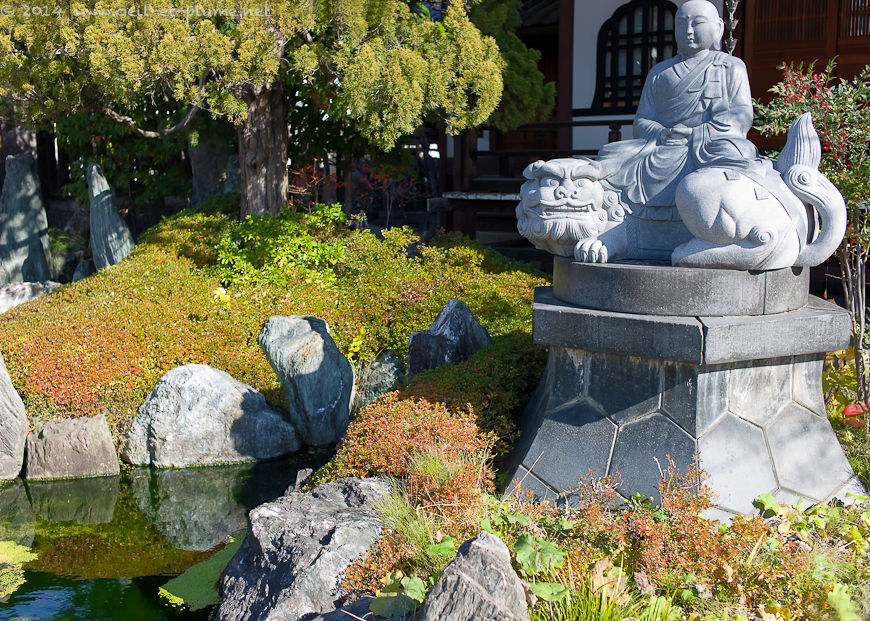 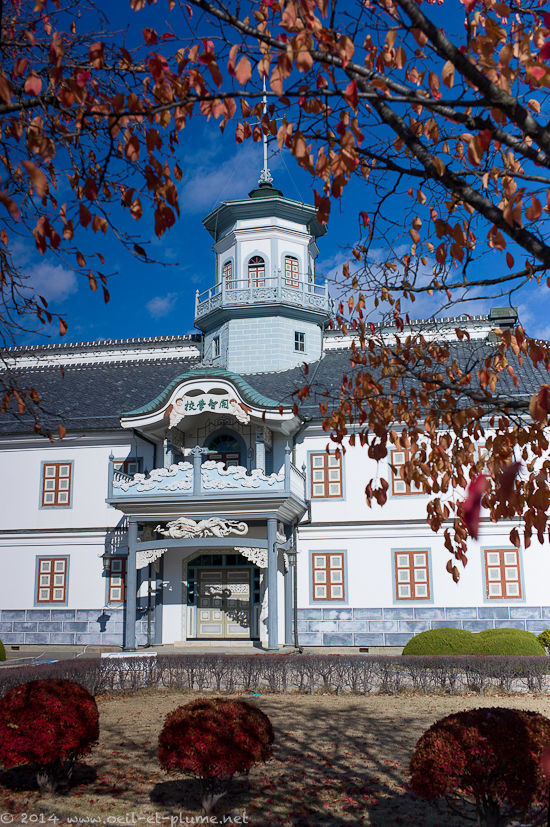 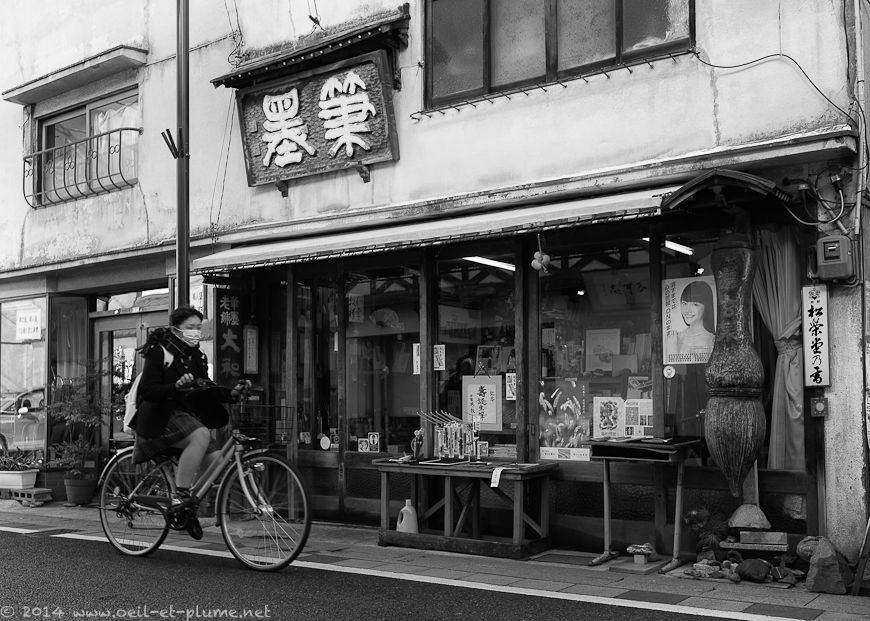 I am amazed by the sophisticated collective organisation of Japanese people. This is not breaking news, I agree; however, to experience this sociological feature closely is very worthwhile. I observe also how much Japanese can be amused and often captivated by minor events in their daily life that would appear insignificant in many other cultures. A childish mind armored with personal rigor and collective discipline.

Matsumoto counts also on a beautiful pagoda complex near the river. I spend much time there, tracking memorable moments to freeze on my digital negatives. 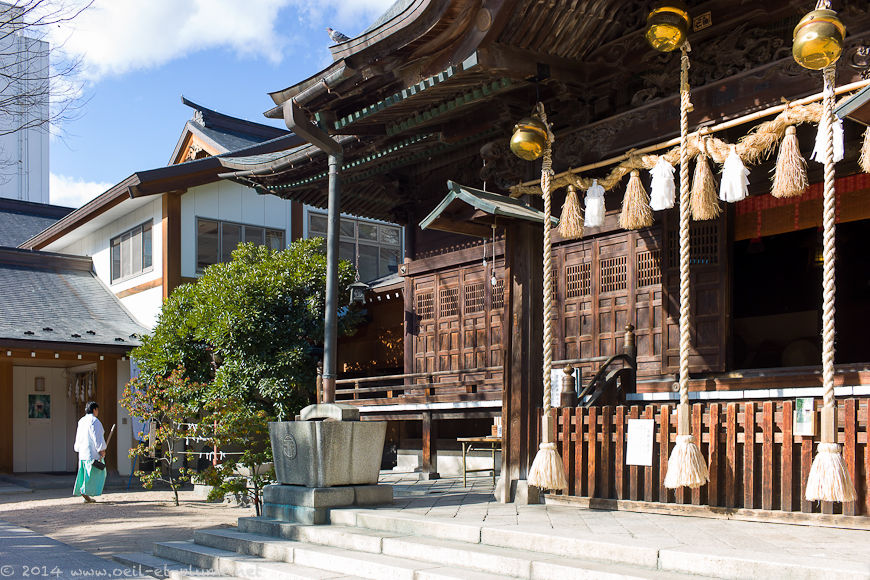 I did not clap thrice during my prayer as Buddhists do while praying in front of the altar. But I confess having happily shaken the thick rope until the stones contained in the brass pot jingled.

There was little religiosity in my gesture, but more of a pleasure to make some noise in a public space. Me childish? Not really indeed. Simply mimicking the Japanese mindset. In Rom act as the Romans act, the French say.

I shot nearby the pagoda one of my favourite Japanese pictures. To me, the walking girl appears as the modern-day shadow warrior of Kagemusha. No, I did not play flute to attract her. Beyond its delicate aesthetics, the photograph fusions many distinctive traditional and modern cultural features to express the quintessence of Japan. 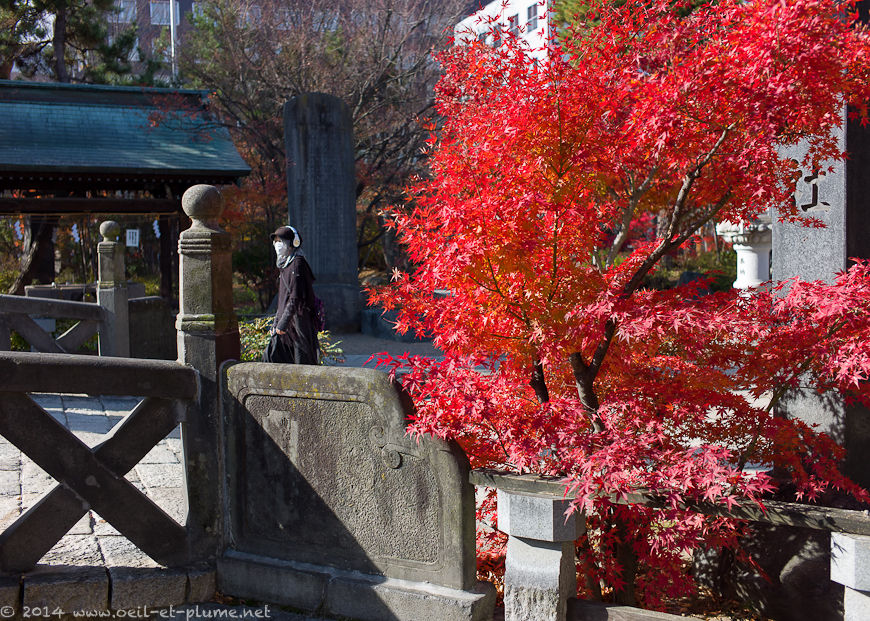 Soon before leaving Matsumoto, I do not resist paying a last visit to the Crow Castle. The edifice looks more elegant than never, with a couple of swans patrolling leisurely the moat water. The sun is like eclipsing as if the night would approach. One day, I will retire to play flute at the top of the fortress. 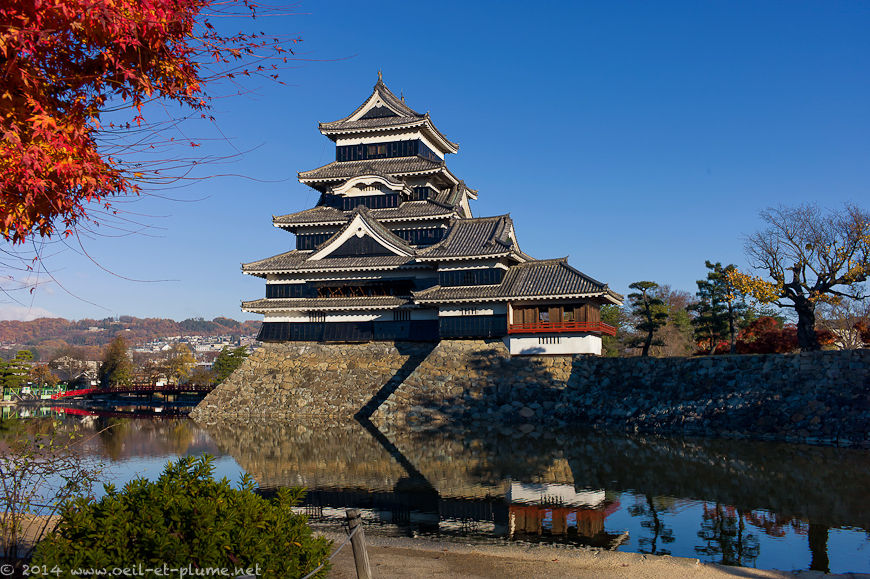 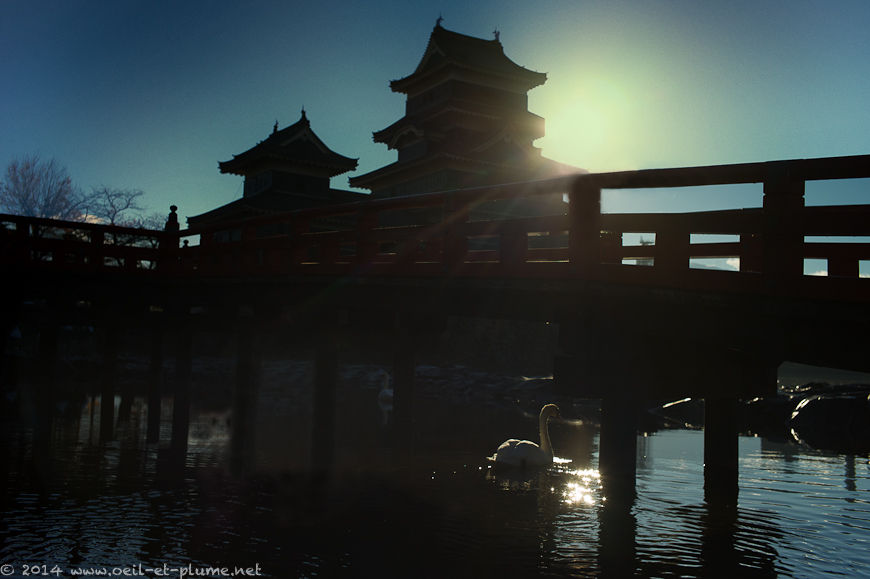 My Kagemusha looks inescapably more romantic than Kurosawa’s one. I hope you don’t mind.