I was a Berliner during the 2014 New Year celebration. 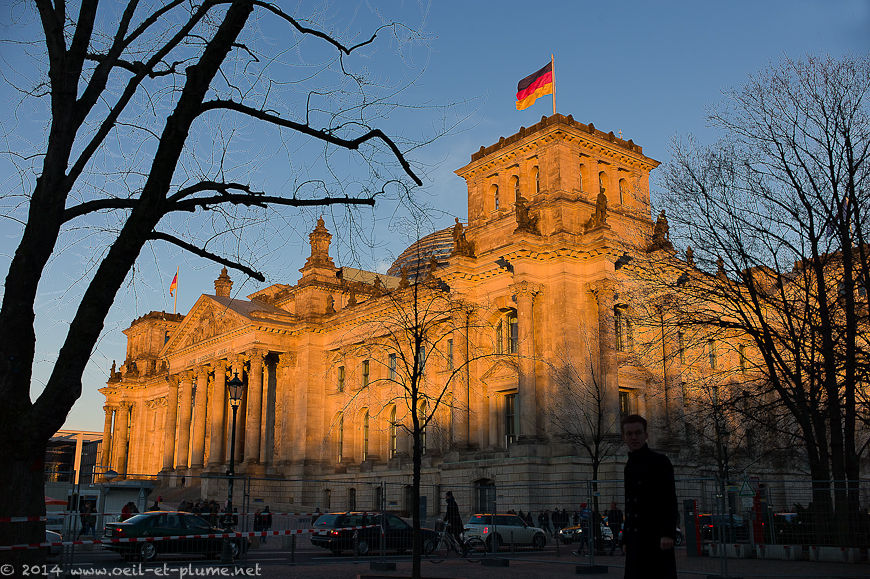 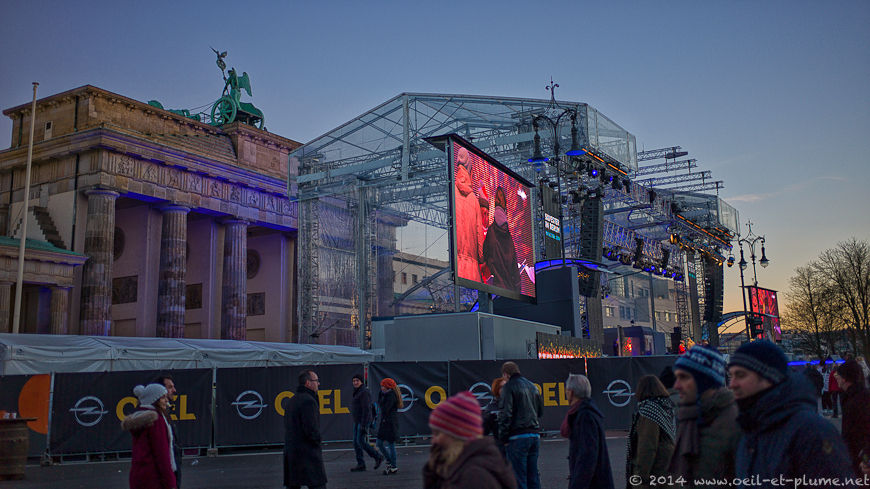 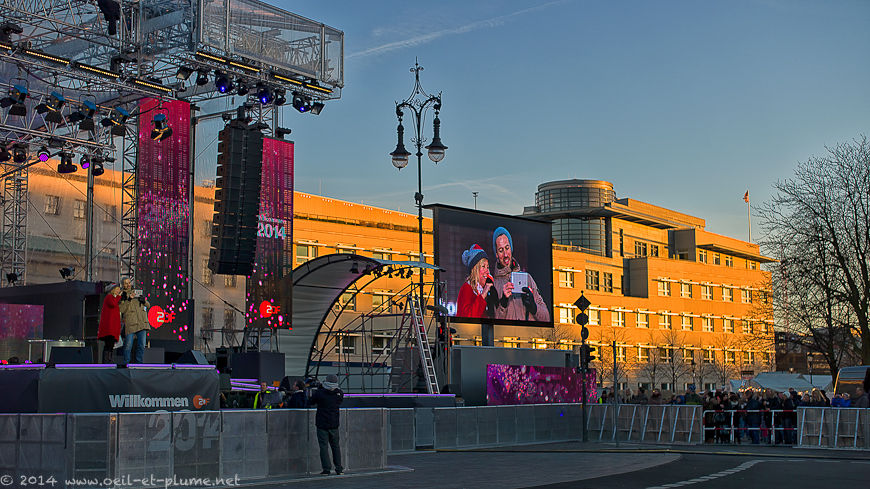 East German authorities start building the Berlin’s Wall in August 1961 to cut off West Berlin from East Berlin and East Germany. It aims officially to protect East Germans against fascism (nazism) that would still affect in West Germany. In practice, the Wall is to prevent further emigration to the West. Between 1945 and 1961, 3,5 million East Germans pass to the West, amongst them many young and well-educated people. Berlin represents one of the main crossing areas along the East German border.

Berlin’s Wall is first made of wired fence increasingly reinforced and extended. A real concrete wall is erected only after that date, doubled with an inner fence running parallel to the outer concrete wall to define a no-man’s land called the Death strip. The most elaborated version of the Wall is built starting in 1975, complemented by increasingly sophisticated monitoring equipment.

The Wall does not completely seal off West Berlin. There are nine crossing points along the 140 km perimeter, of which the famous Checkpoint Charlie.

Between 1961 and 1989, thousands of people attempt to pass the Wall clandestinely, not only on foot through the Death strip but also digging ad hoc tunnels, driving at full speed civilian or military vehicles, flying hot air balloons and other ultra-light flying devices, or gliding along areal wires.

Many people attempting to reach West Berlin clandestinely die in their endeavour. East German soldiers are instructed to shoot at anyone attempting to cross the fortification. Those wounded on the Death strip are often left bleeding to death.

While Berlin’s Wall helps stopping the brain drain of East Germans to the West, it also becomes the ‘Wall of Shame’ – a symbol of communist tyranny during the Cold War.

The remnants of the Wall have become one of the tenets of Berlin’s contemporary identity. Not only for what it meant during the Cold War but also and primarily thanks to its strong visual and symbolic presence in the urban landscape.

The Wall Park in the densely populated district Prenzlauer Berg entails another section of the former division of Berlin, brightly coloured by anonymous graffiti. Disappointed by the graffiti designs displayed there, I decide to visit the best section of the Wall when it comes to street art – i.e. the East Side Gallery located at Friedrichstrasse near Ostbahnhof in Friedrichshain-Kreuzberg. 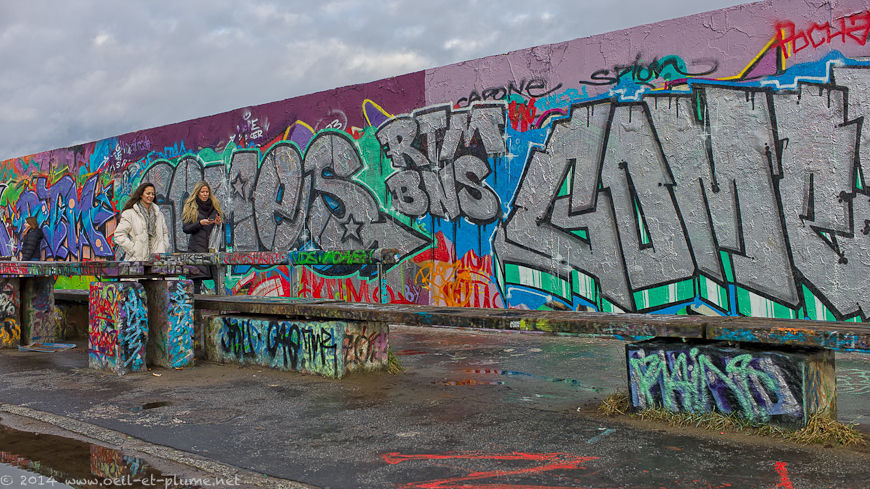 I head to East Side Gallery in the early hours of the year 2014. Berlin’s cityscape takes weird shapes and colours in my mind still dizzy and opaque by the yearend celebration. 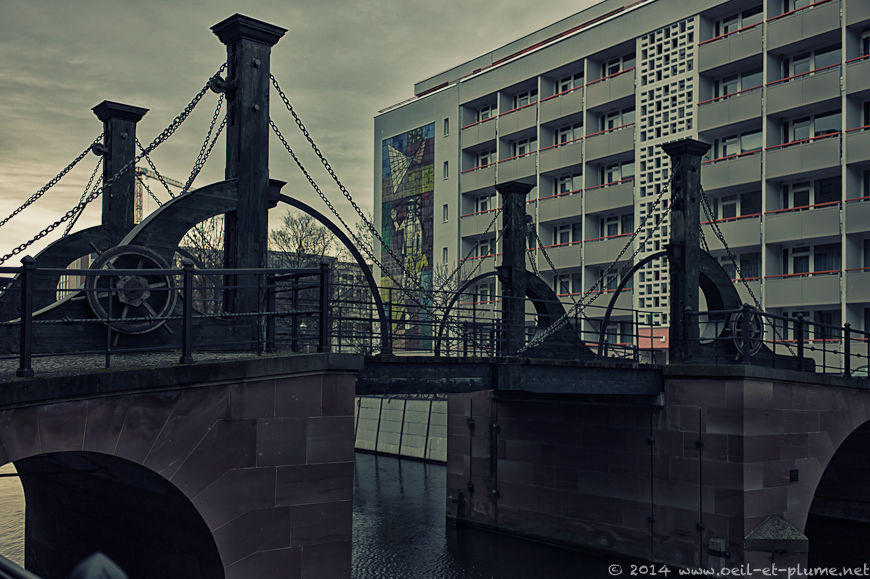 The town is slowly waking up. I pass through a former industrial area reconverted into alternative cultural scene. Street art bounces my tired eyes and my mind with dark and gigantic graffiti. Maybe some of those artists participated in the East Side Gallery. 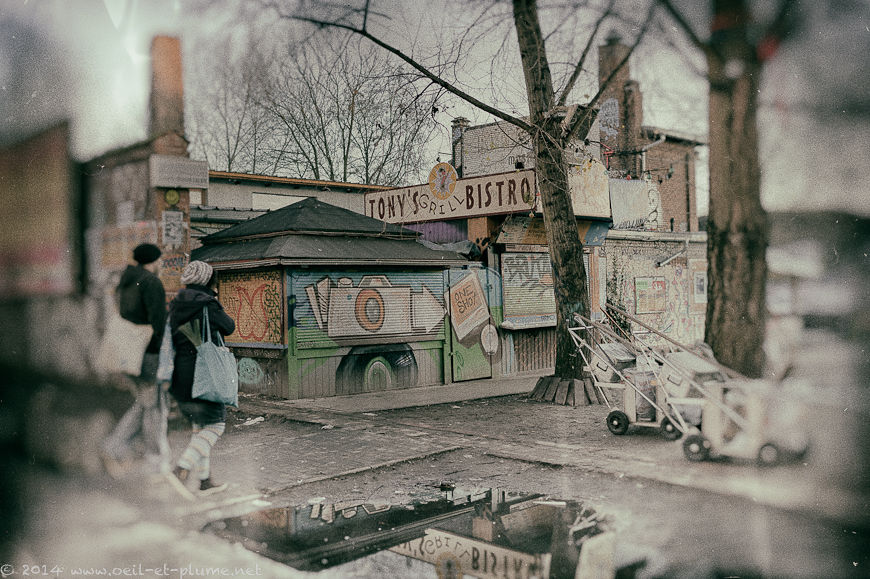 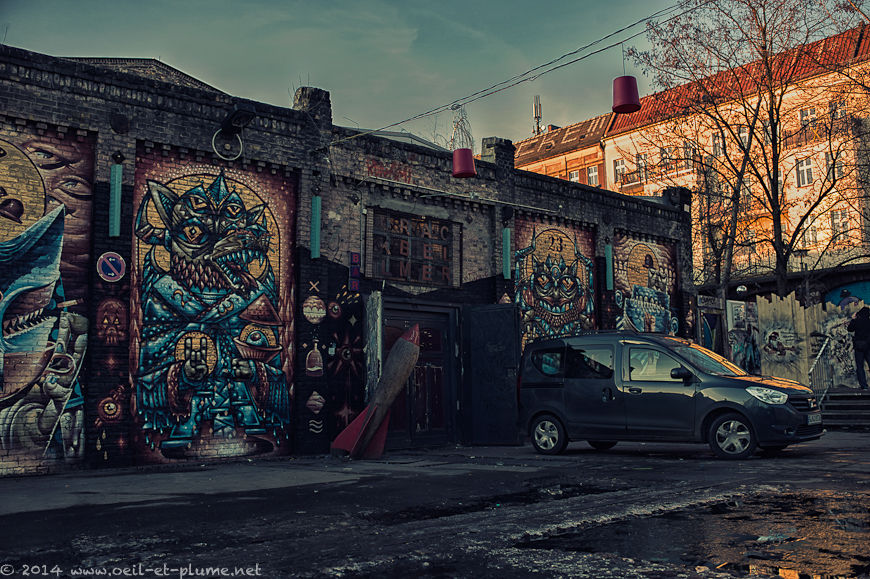 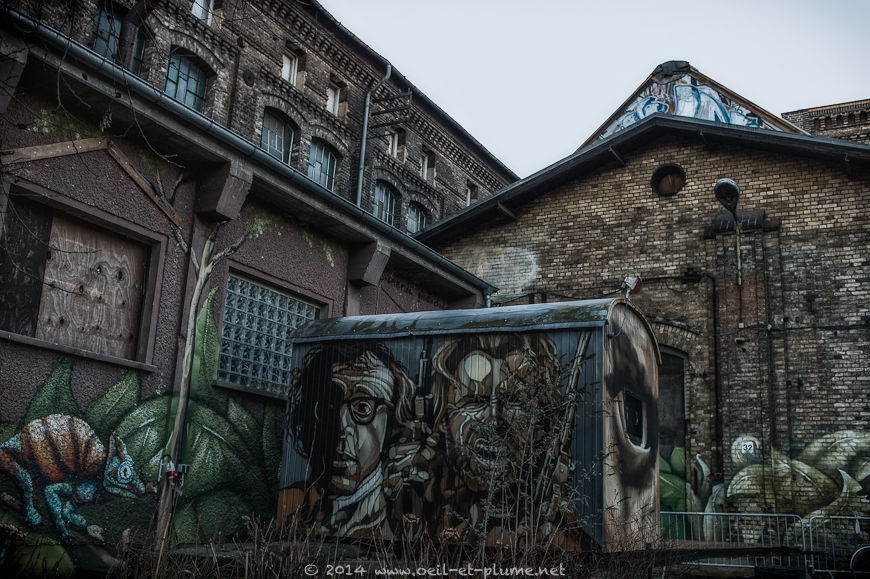 I reach finally the remnants of the Wall near Ostbahnhof. The East Side Gallery is so called because this 1,3km-long wall represents possibly the longest open-air graffiti art gallery in the world. Originally, only the western side was covered with graffiti since the eastern side, plain grey or white, was out of reach to East Germans. 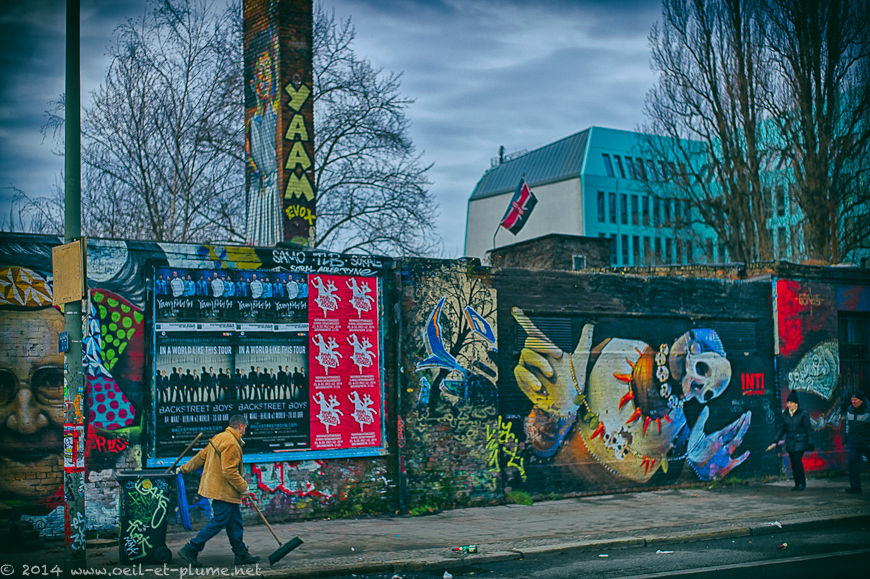 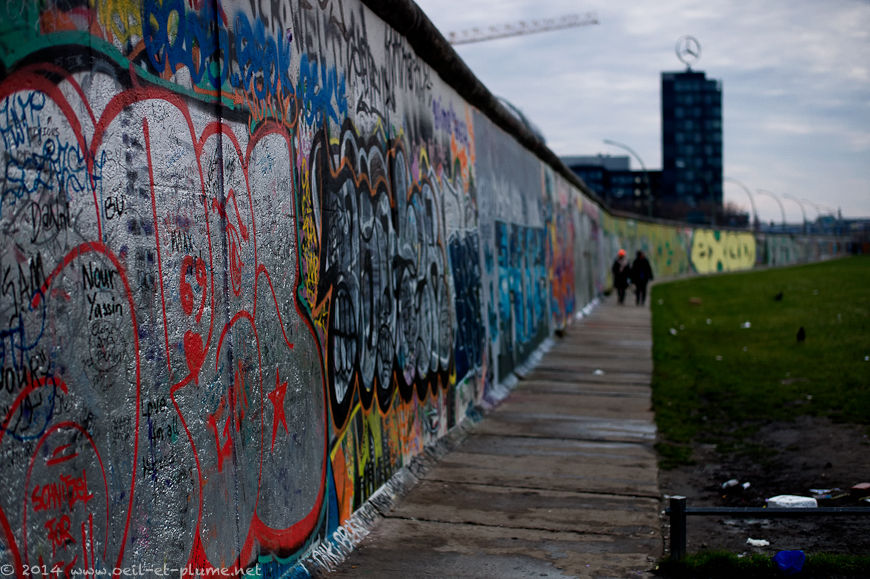 After the fall of the Berlin Wall in November 1989, the eastern side of Wall becomes an immense canvas for graffiti. Early 1990, more than hundred artists mainly from former West and East Germany are to sketch in what will become the East Side Gallery their artistic and political vision of the collapse of the Wall. Their creative joint venture documents major and rapid societal changes to formulate tremendous hopes for a better and freer world.

Monitoring the entrance of the Gallery as through the Checkpoint Charlie, a painting summarises the political background and the history of the Wall. It sketches the famously controversial graffiti presented further in the Gallery depicting former Soviet Union and East Germany Presidents Leonid Brezhnew and Erich Honecker kissing each other. 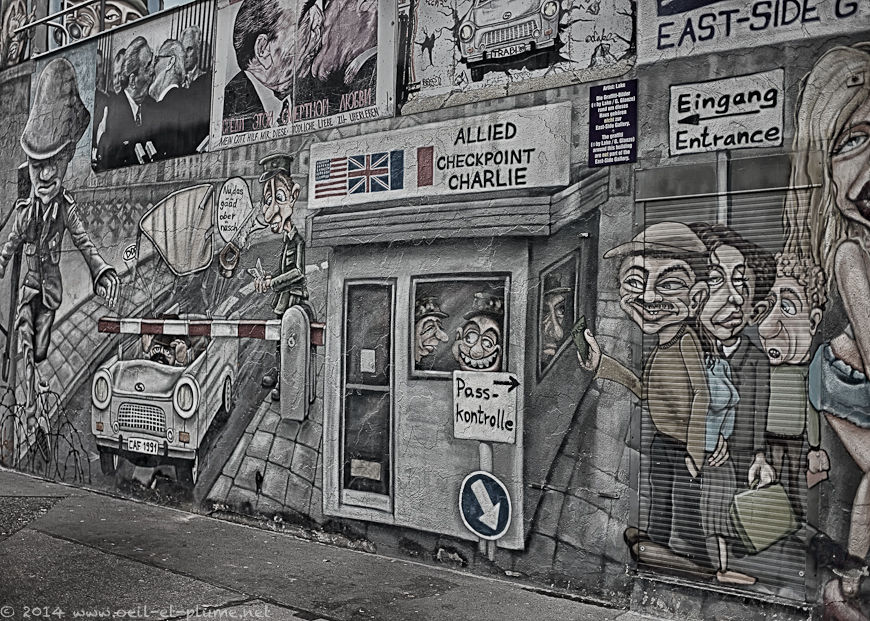 The physical and mental oppression exerted by the former East German state constitutes indeed a major topic expressed throughout the Gallery. Not only is the East German citizen severely restricted, but also compelled to express a positive image of his country toward the rest of the world. Failures to comply attract punishment including deprivation of liberty. 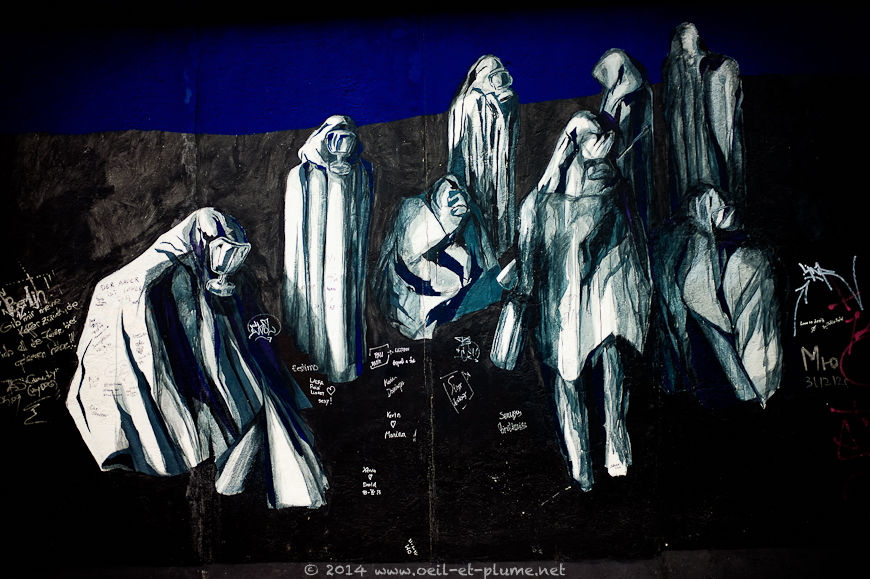 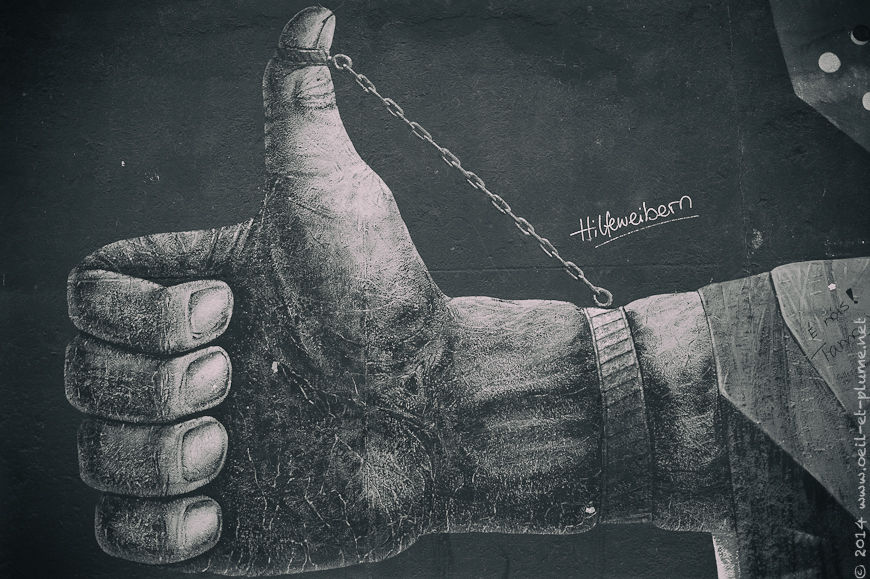 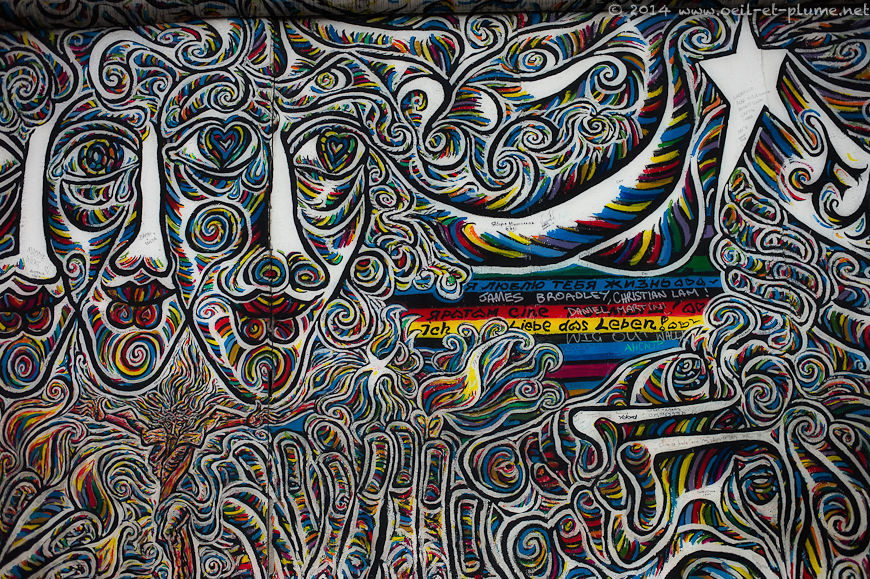 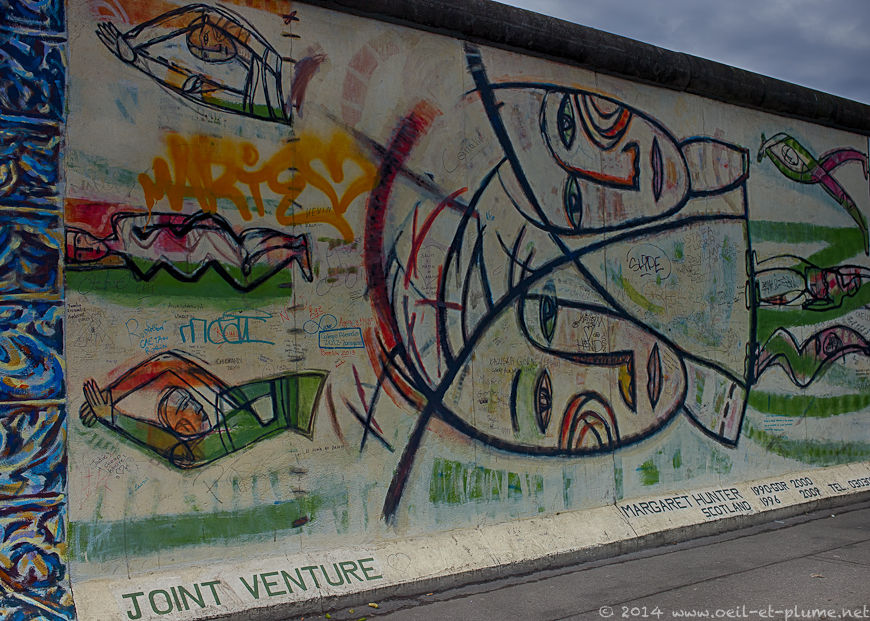 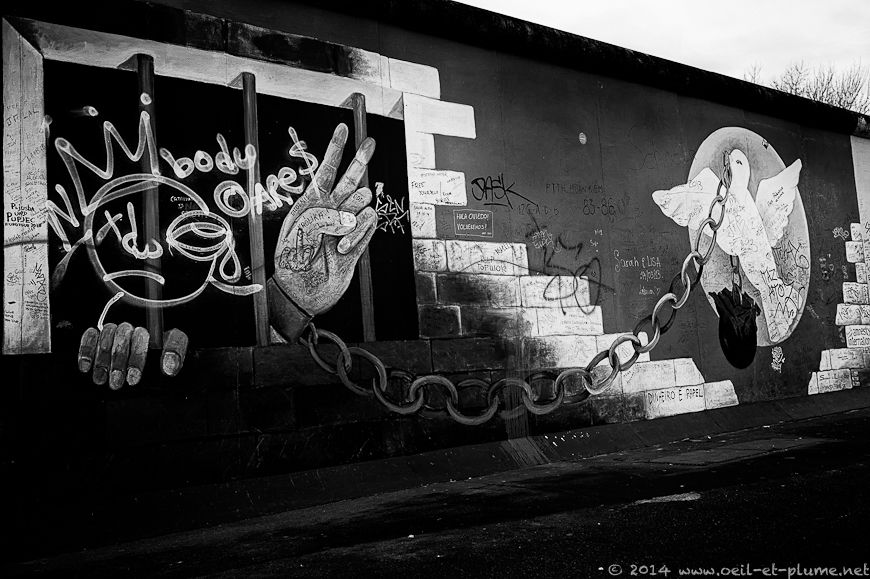 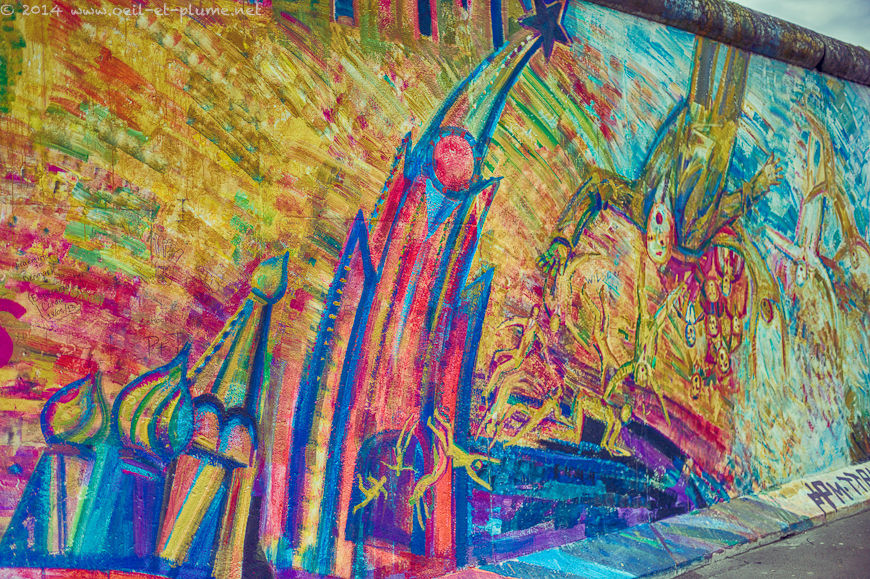 Correlatively, former East Germans dream about the freer and more creative western world, depicted sometimes as a paradise on earth. 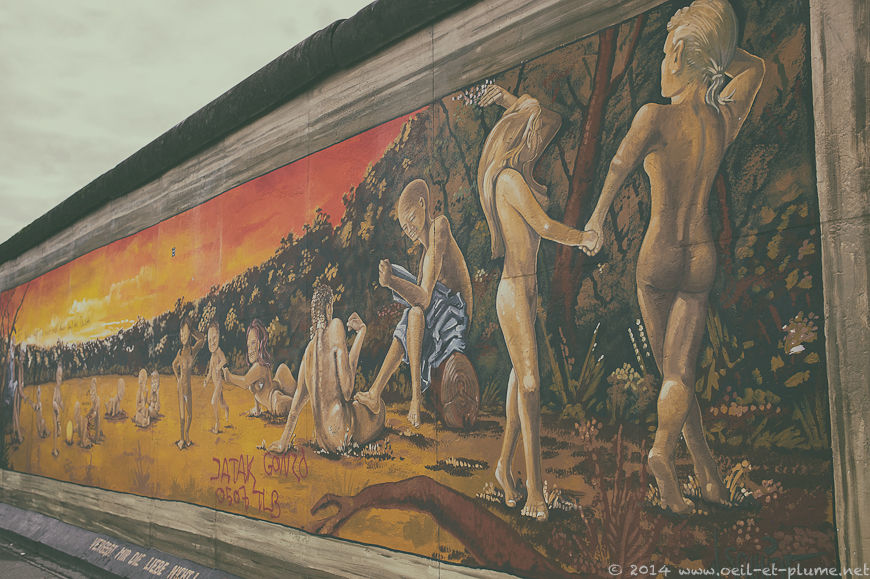 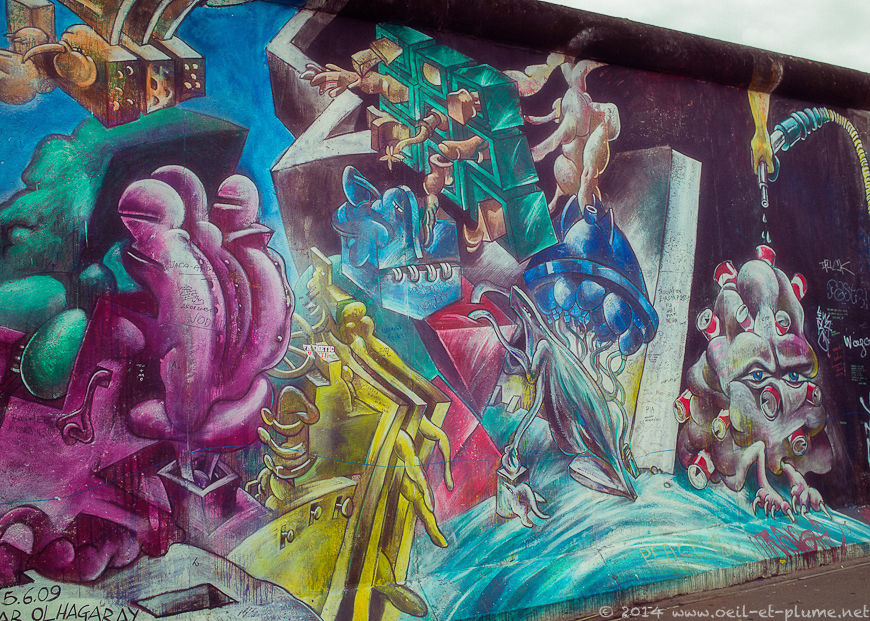 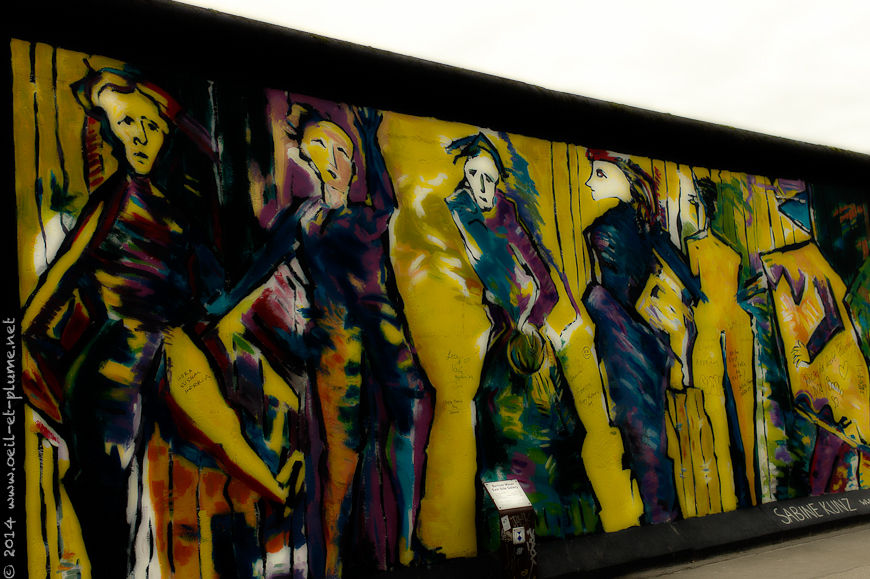 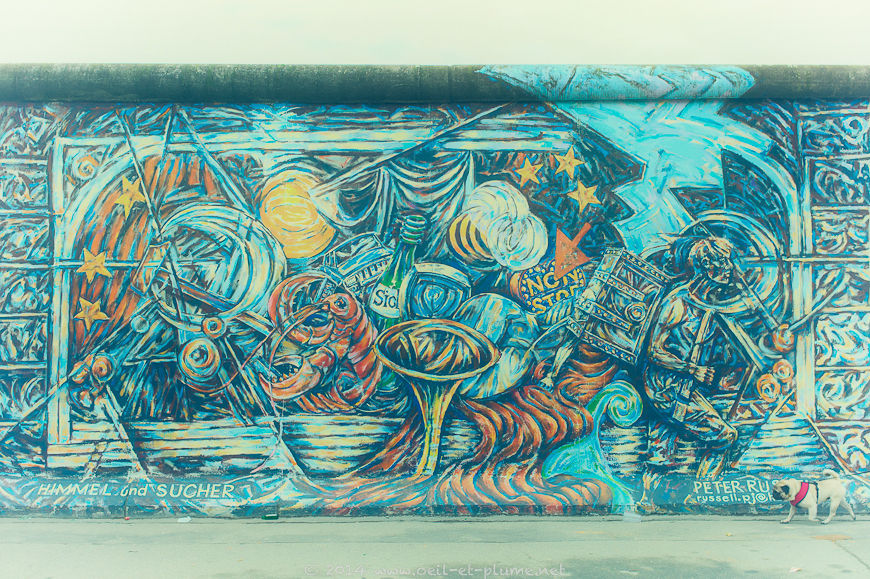 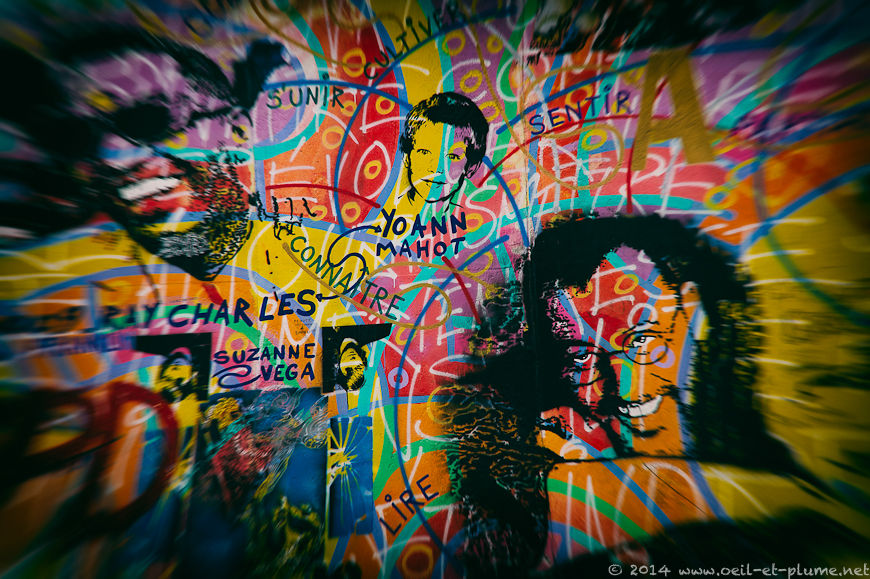 No surprise, the East Side Gallery portrays multiple attempts to cross the Berlin Wall, be it on foot or driving the mythical East German Trabant car. 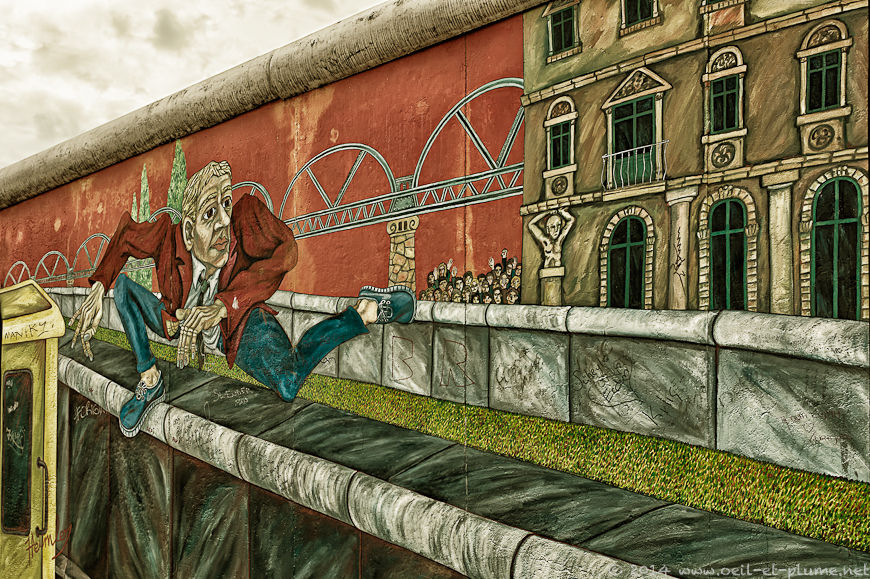 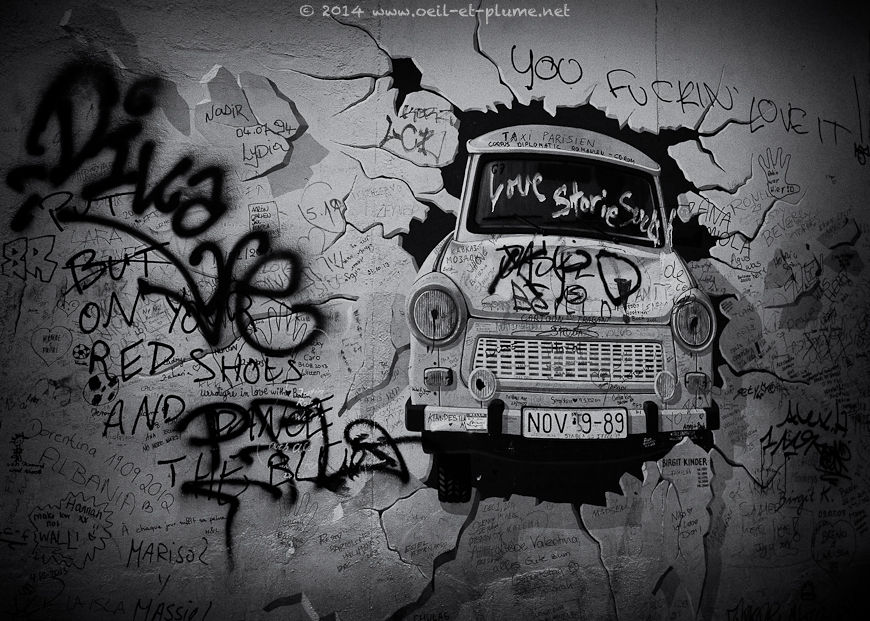 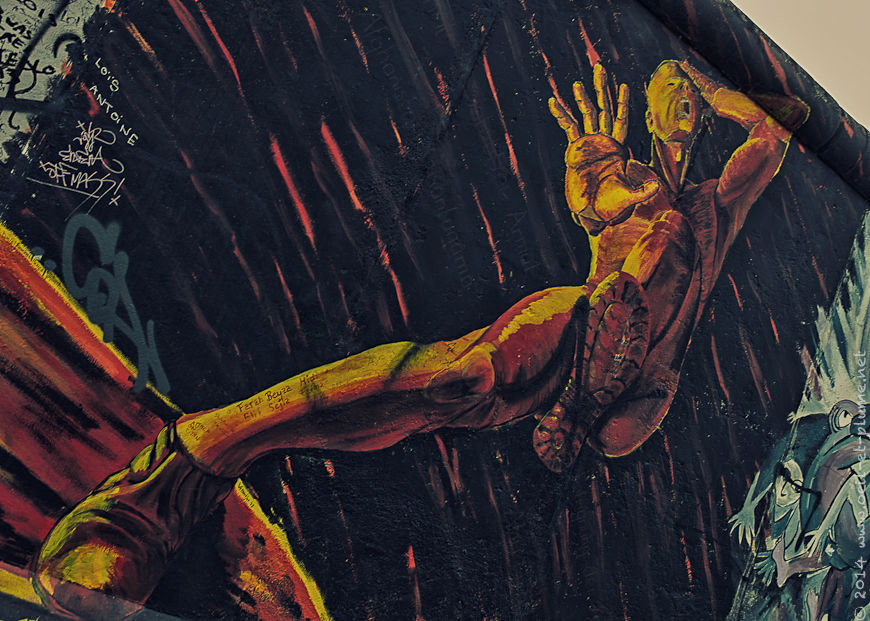 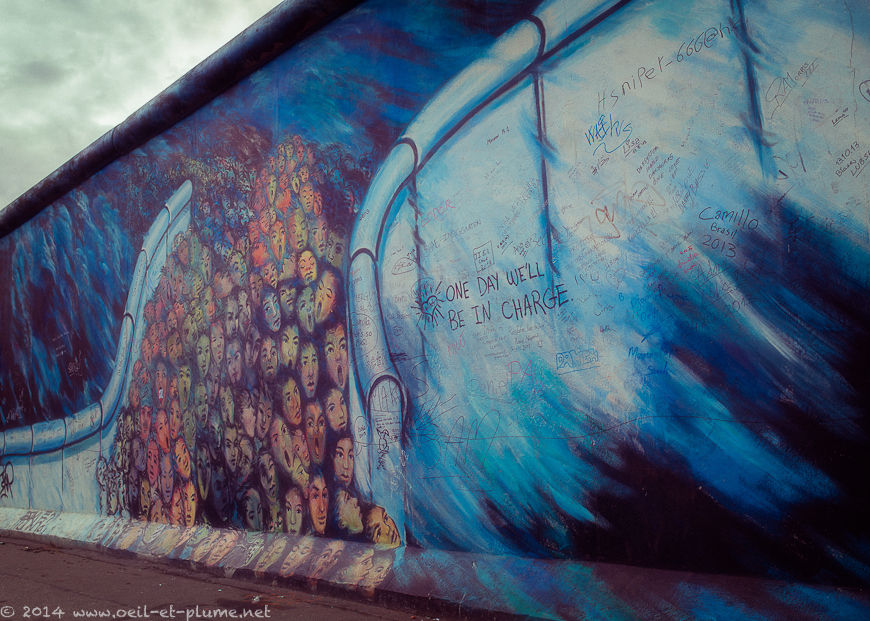 Capitulating to the socio-political pressure for change, the Wall falls in 1989 to trigger the subsequent collapse of former East Germany in 1990. The process is summarised in the concept of ‘illumination’ (Erleuchtung). Let’s enjoy now a freer and united society. 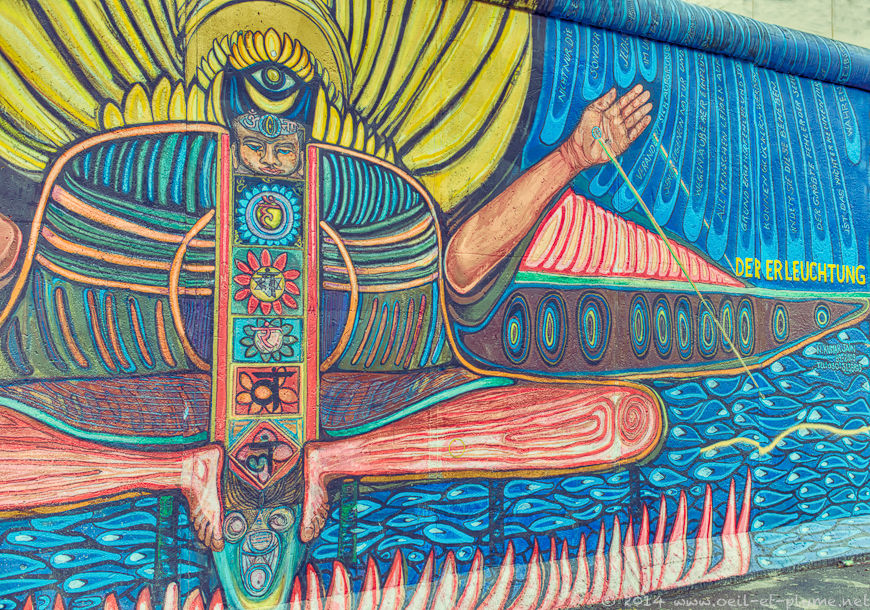 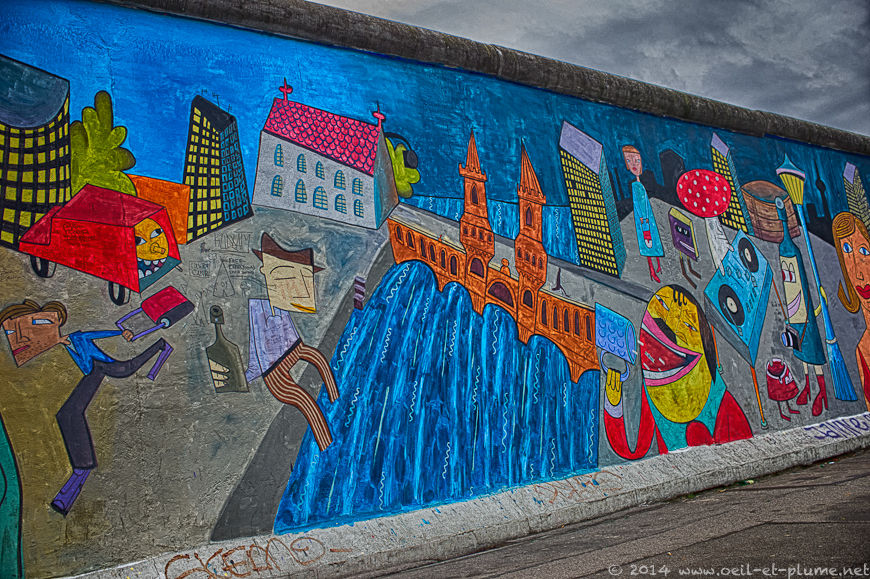 However, ‘there are many other walls to fall’. Capitalising on the collapse of the Berlin Wall, graffiti artists in the East Side Gallery call for substantial and positive societal changes across the world. One of the major challenges in this regard is ecological. To respect our natural environment requires our mental barriers to fall, it is stressed. 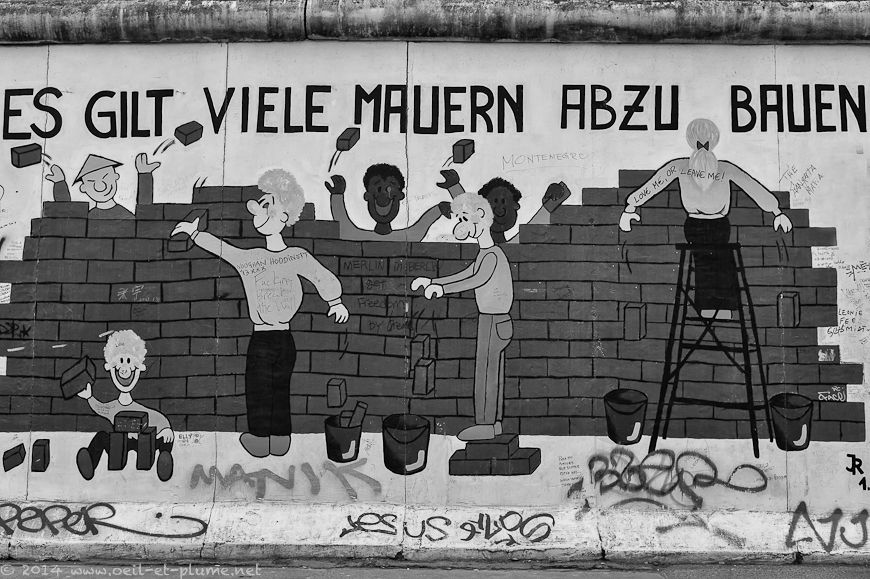 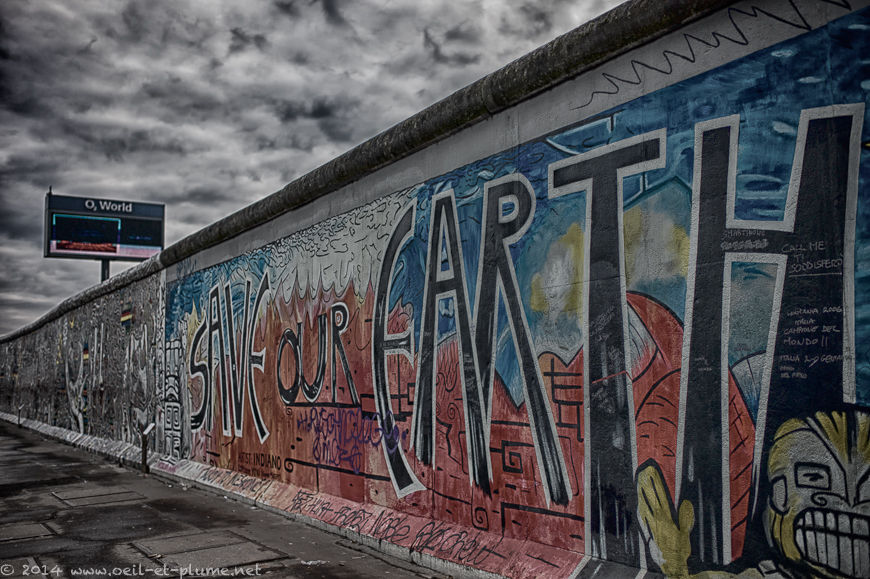 Since 1990, Germans are politically united into one single democratic state. This should be a paradise on earth, according to the expectations of East Germans. Not quite.

Since its inception, the East Side Gallery suffers continuously vandalism despite being classified. In 2009 the Berlin Council decides to overhaul the site for the 20th anniversary of the fall of the Wall. The site is indeed a major touristic attraction in Berlin. Good point, in principle.

However, the authors of the graffiti composing the East Side Gallery are offered little money to repaint their artwork and made clear that if they don’t accept the deal, their murals will be whitewashed and recreated by third parties. The contributing artists have filed a legal action against the Berliner authorities over the alleged infringement of their intellectual property rights.

Regardless the outcome of the legal action mentioned above, the controversy on the overhaul of the East Side Gallery sheds a gloomy light on the contemporary valorisation of artistic production. It also illustrates the difficulty of bringing street art into an institutionalised cultural policy framework. Street art is born and probably delivers its best outcome at the margins of society.

The comprehensive list of contributing artists to the East Side Gallery is available here.  The artwork displayed above reflects only my own subjective selection. To reinforce the idea of subjective and creative choice, I substantially modified the colours and the perspective of the graffiti artwork presented. To appreciate it in real, just pay a visit to the East Side Gallery.