Heading from Amasra to Sinop this morning, along the Black Sea’s southern shore. My guidebook is quite promising: ‘The drive (…) is wonderfully scenic (…). Expect minimal traffic and stunning views at every turn, with lush, green forested headland, rugged cliffs and glistering turquoise waters’.

My 312km-long coastal drive to Sinop does not deliver all promises due to unfavourable weather conditions. I enjoy much the minimal traffic, a bit less the thousand or so sharp turns. My mountain drive experience proves to be quite a useful asset in that context. Over the day, my neck turns stiffer and stiffer while my camera looks in vain for imaging opportunities. Never mind, I reach Sinop by late afternoon.

Time to look for a hotel. I am politely but firmly pushed out of a rather fancy and pretentious hotel under the claim that their clientele is made of high-end Turkish customers. Fair enough, I find a small pension hotel which fits me better. I am soon offerred tea and food in the living area by Gizem, the female tenant. We break ice as quickly as ice melts in hot water. I manage to escape, attracted by Sinop’s port nearby Gizem’s hotel.

The place is quiet, preparing for the night. Sinop’s natural port is renowned since thet Antiquity, appreciated for its safety throughout the year. Thus Sinop is a trading and fortified port since more than 2,500 years. Interestingly, Sinop is the only spot of the Black Sea’s southern coast facing south, where as other Turkish ports look naturally north. 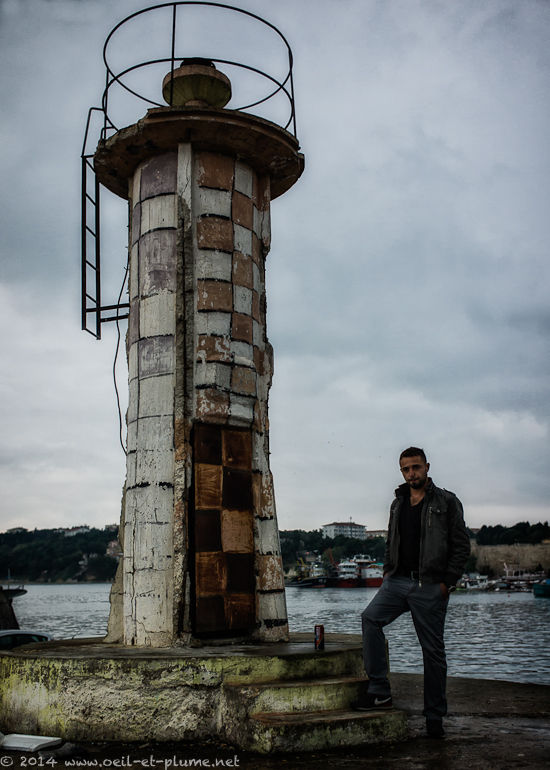 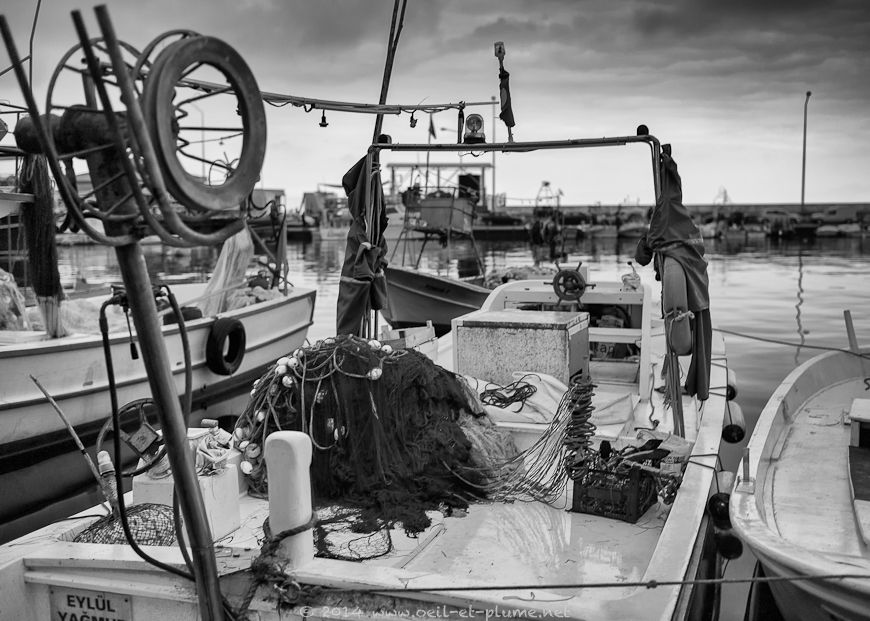 At dawn on the next day, my camera is already at work in the port. A visual festival multiplying lights, perspectives and locations. 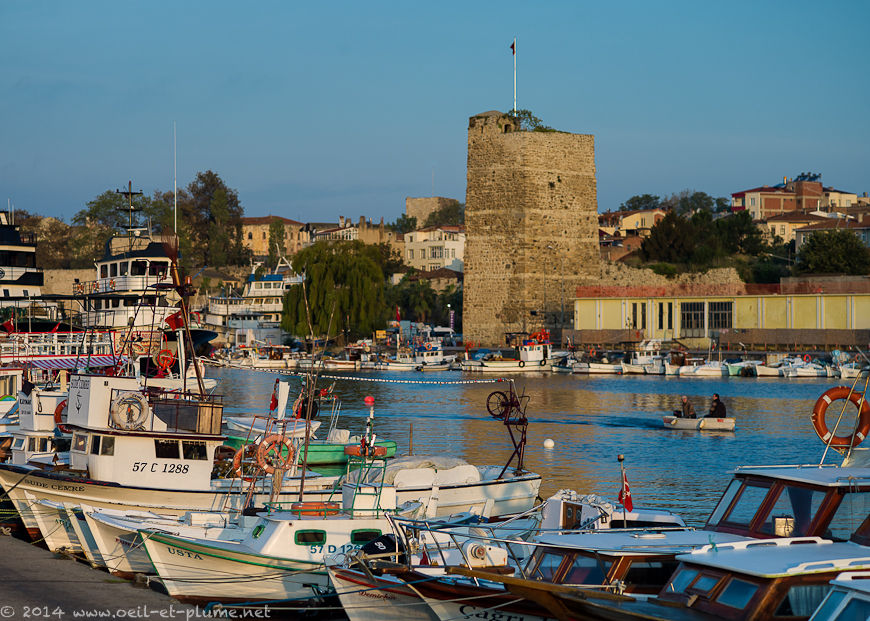 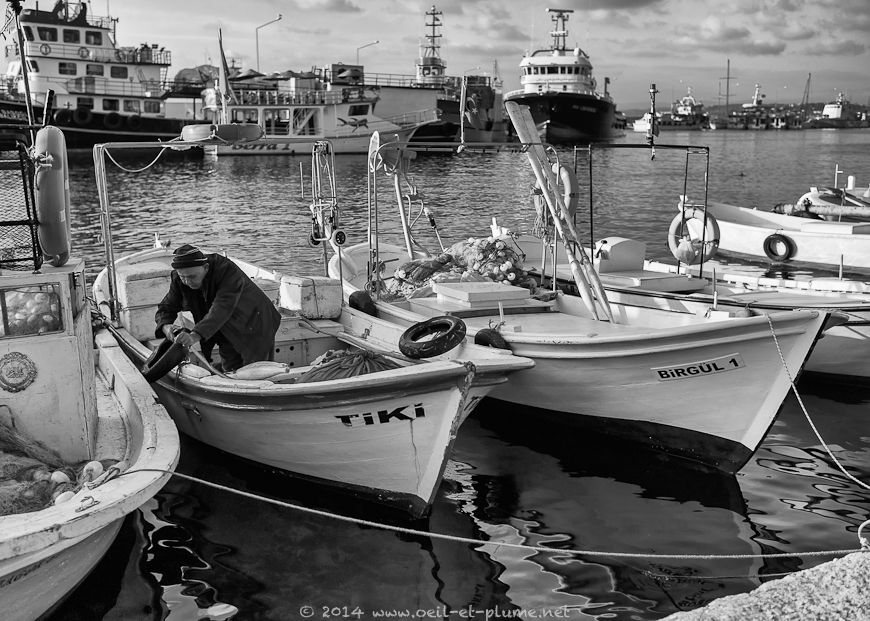 Traditional fishermen who spent most of the night on the sea are now closing their working day. They are quite tired, but the catch is good. On bigger boats operating on an industrial scale, sea crews are relayed by ground staff who transfer and load tons of fish into refrigerated lorries. 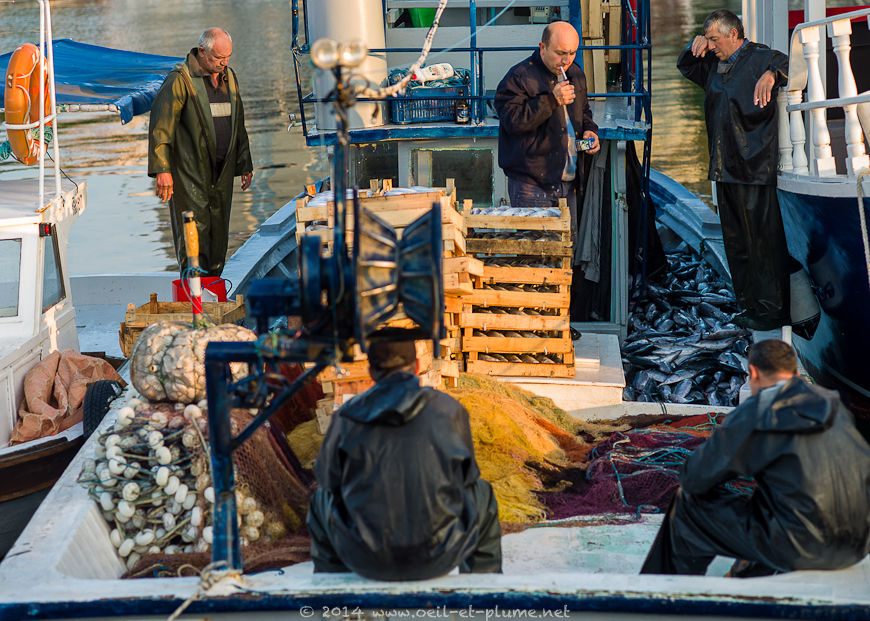 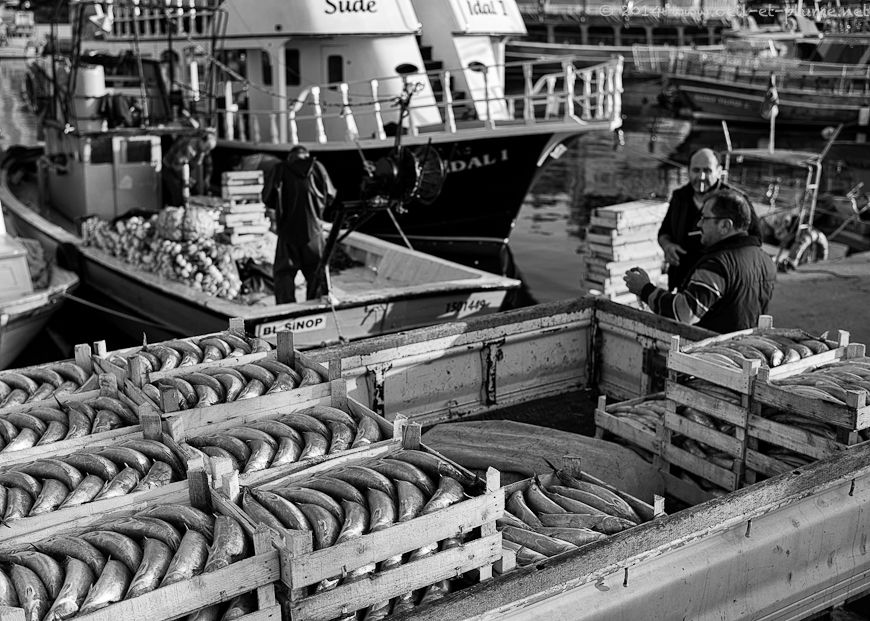 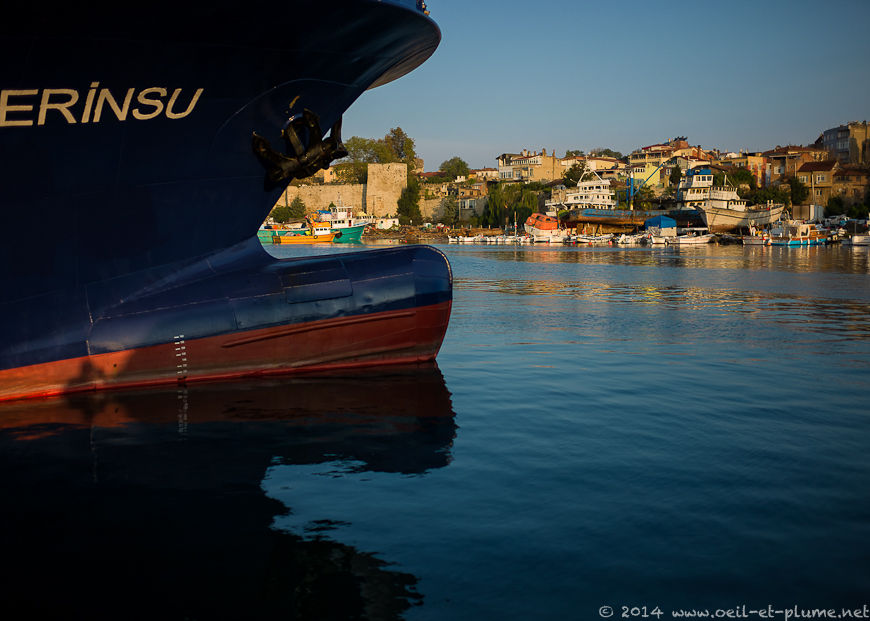 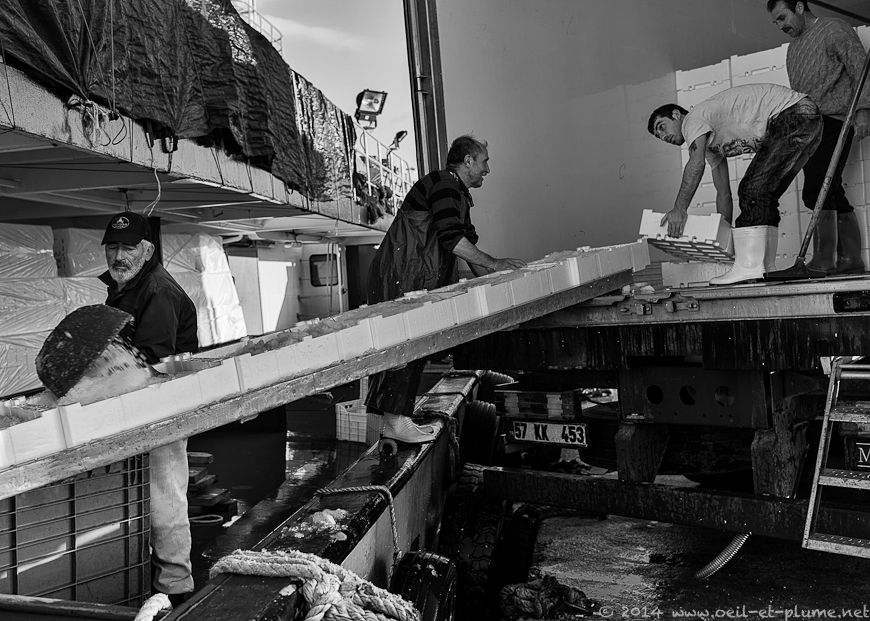 Fishing nets, those underwater traps for marine life, can also be approached from a more aesthestic and poetic perspective. They are so strong and vulnerable at the same time, able to retain thousands of fishes but also so often damaged that they require daily inspection and maintenance. 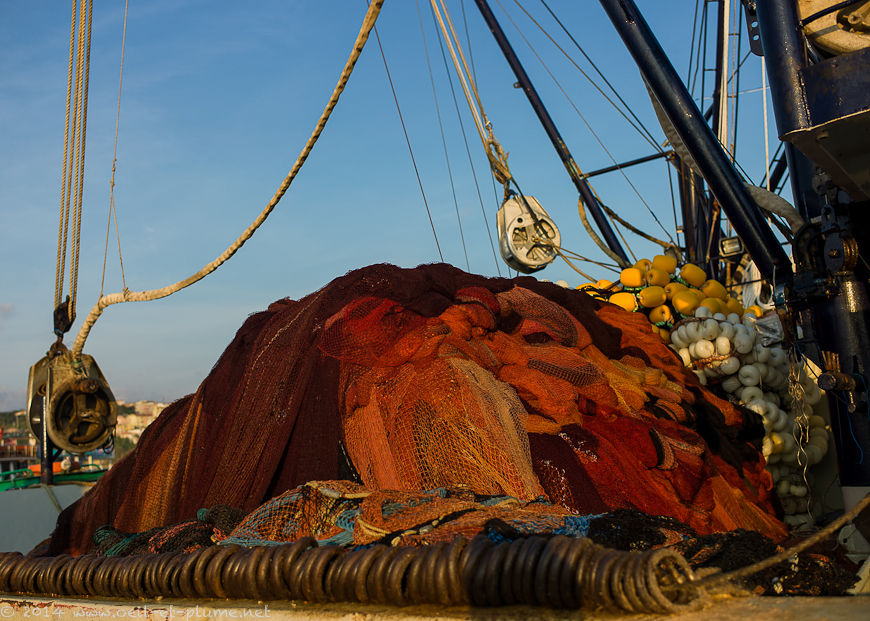 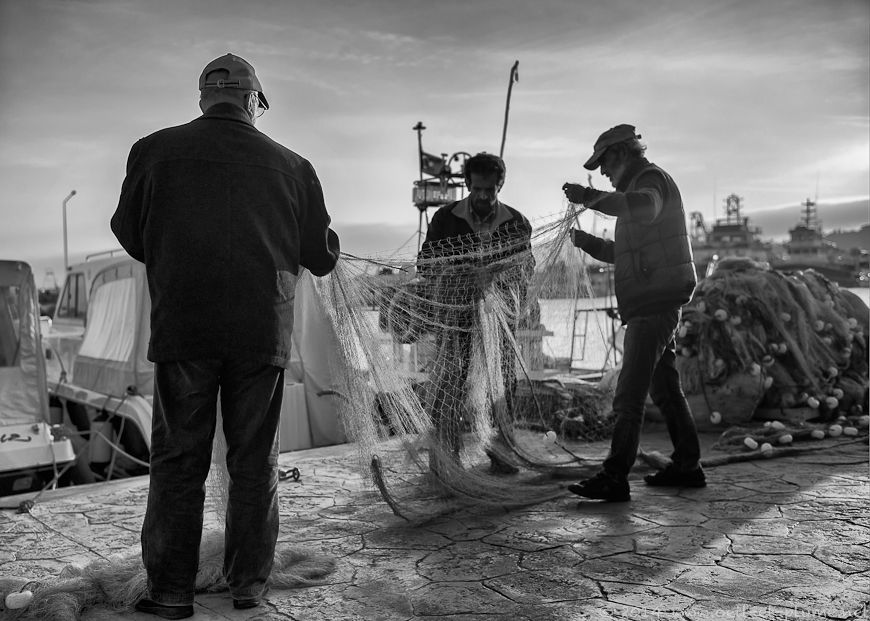 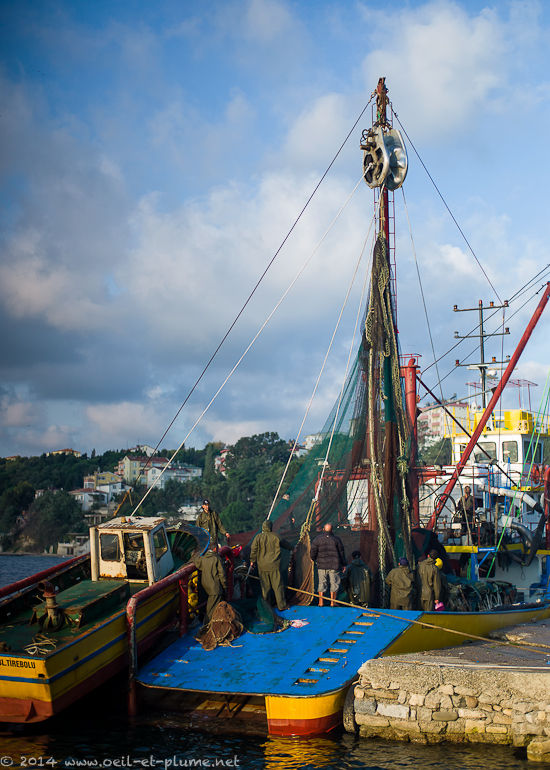 Sinop attracts nowadays a sizeable tourism flow fuelled by majestic sea liners. This form of collective and organised tourism is not my cup of tea, I am afraid. 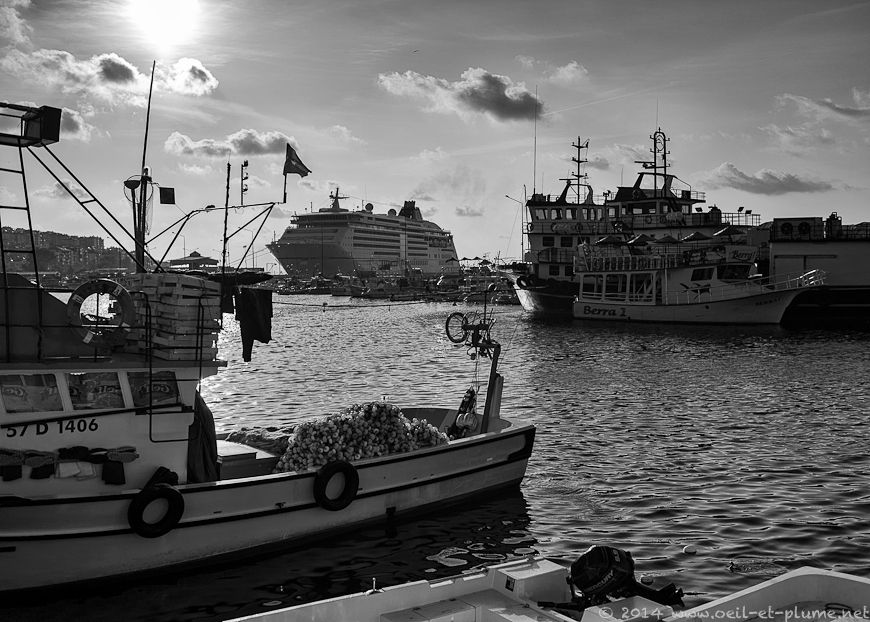 Sinop’s history is not all serene. The port town is besieged and captured from the Bizantines by the Seljuk Turks in 1214. Part of the Crimean War, the battle of Sinop opposes a disintegrating Ottoman Empire to an ambitious Russia in 1853. The one-day battle results in the destruction of the Ottoman fleet harboured in Sinop port and claims over 3.000 Ottoman military lives. 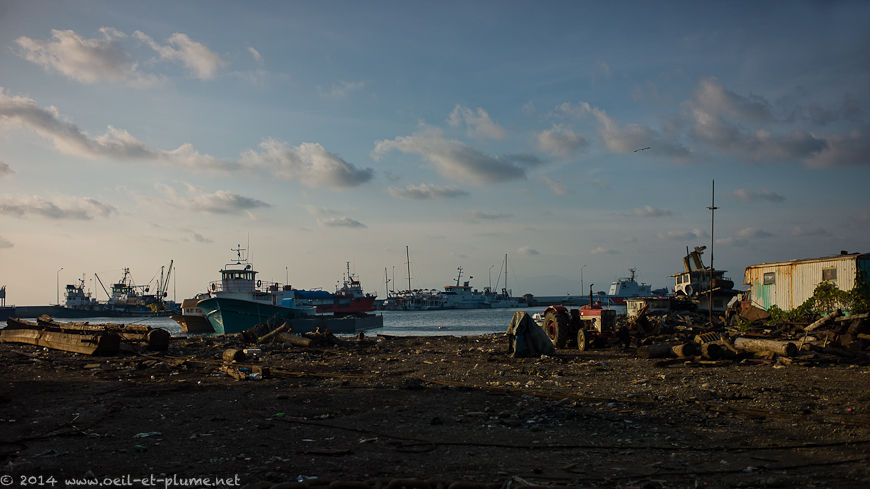 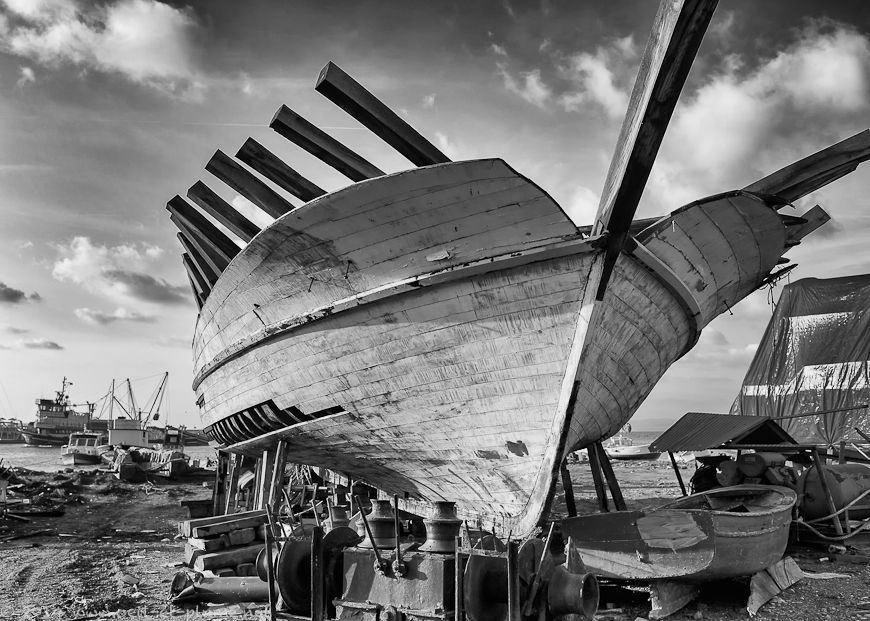 Sinop town is a logical extension of its port. I spend quite some time cumbing various neighbourhoods. The visual references to sea life are everywhere. 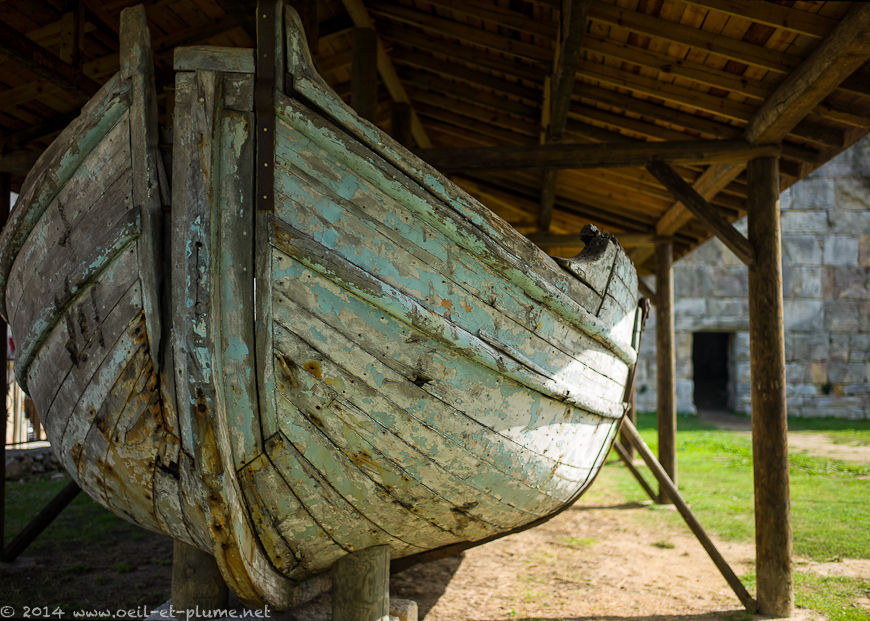 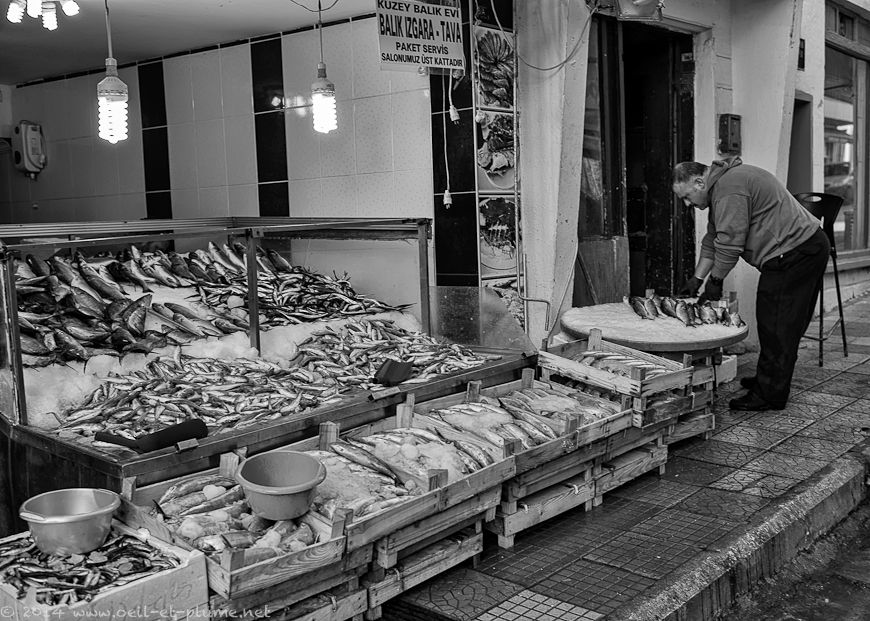 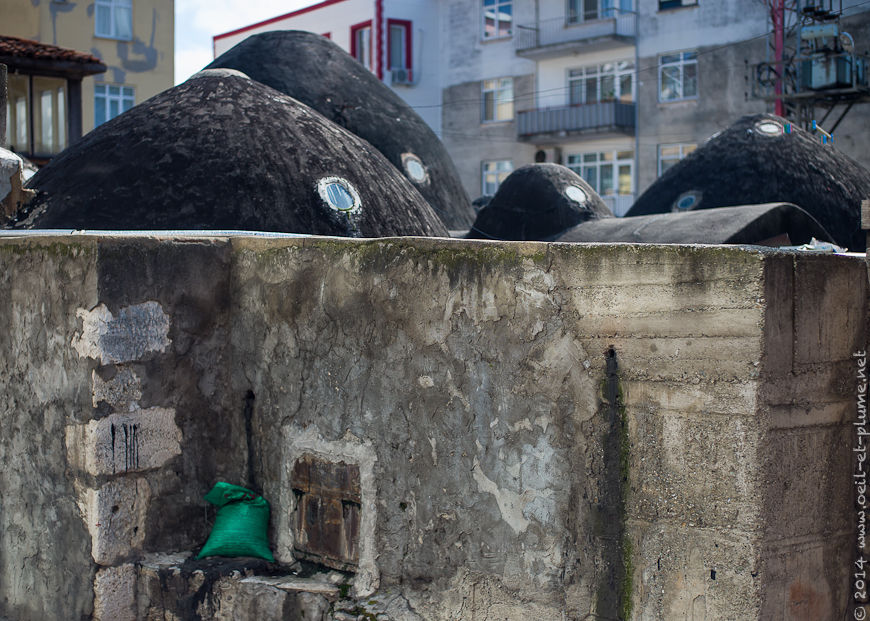 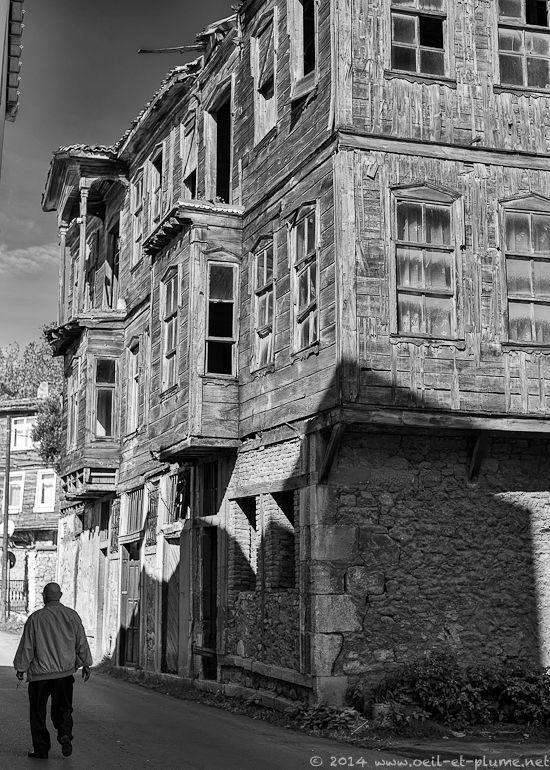 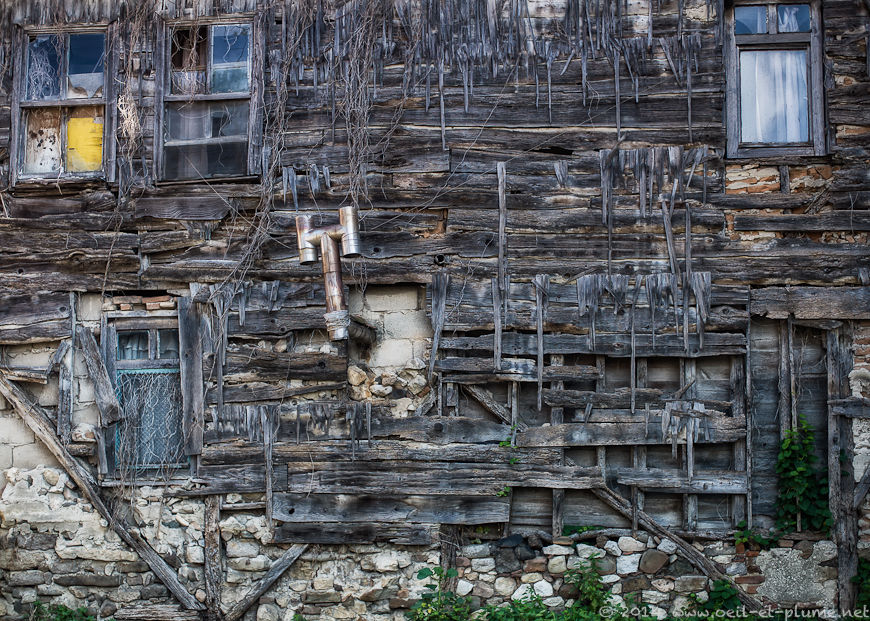 I don’t resist visiting a former prison, eager to imagine the closed life prevailing there until the closure of the detaining facility. My camera detects an Ionian capital used as building material of the outer security perimeter. What a deceiving destiny for such a delicate piece of architecture.

First a Hittite town, Sinop is made an Ionian colony in the 7th century BCE. It flourishes rapidly during the Antiquity as a major stop-over on the regional commercial routes. Early 20th century, Sinop’s population is still predominantly of Greek origin. 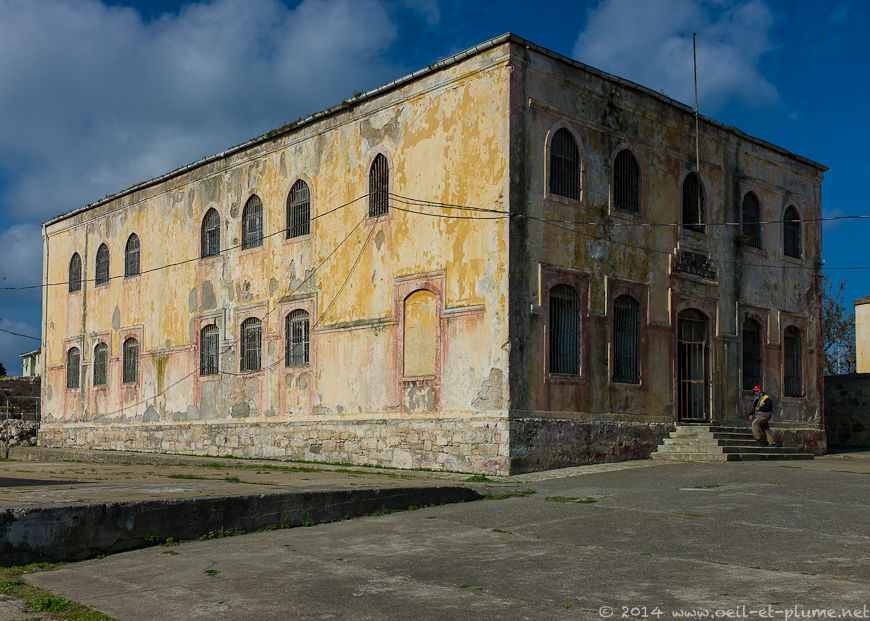 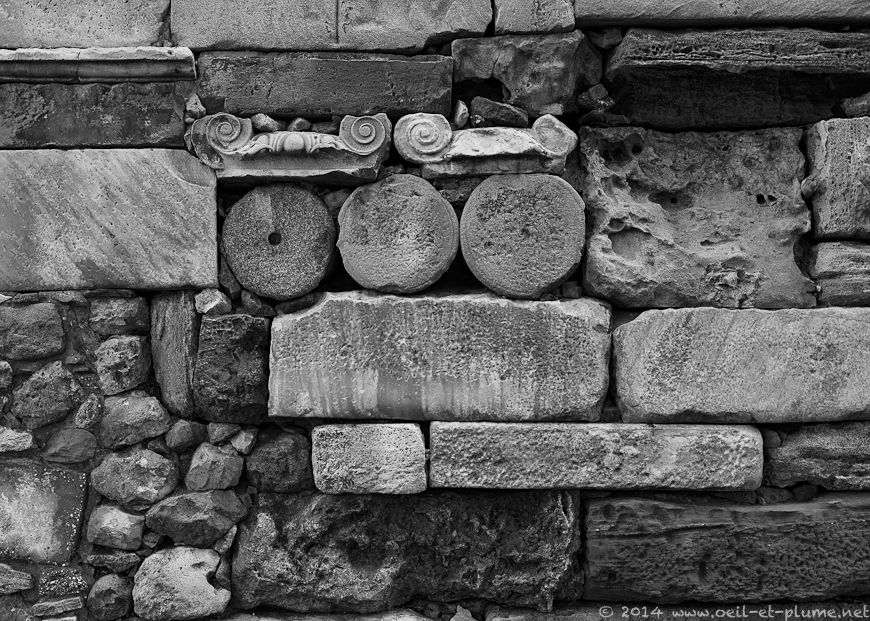 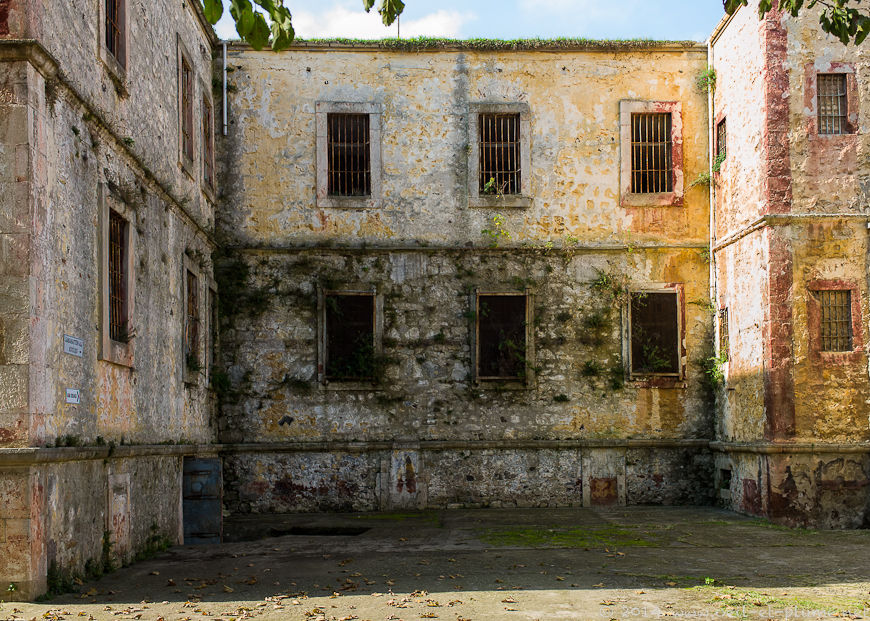 Sinop is also where Diogene is born back in 412 BCE. The Greek philosopher said to have lived in a barrel or a jar in a marketplace in a search for a simple but genuine lifestyle. 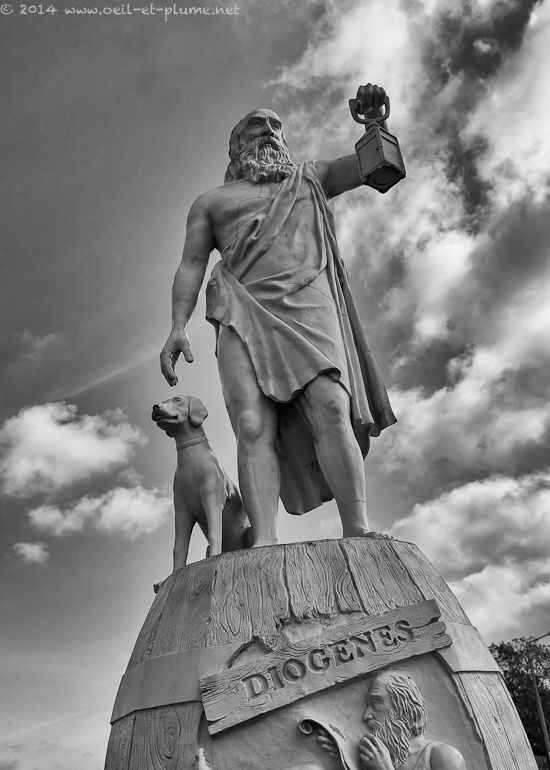 Disciple of Heracles, Diogene promotes the virtue revealed by the action rather than by the theory. He openly challenges Plato and Socrates, calls for reforming Athens social conventions. Campaigning against corruption, Diogene carries a lantern throughout daytime, in search for an honest man. Diogene is quite a controversial figure, since he is first banished from Sinop for illegal debasement of local currency.

Never mind, Diogene is my friend since he declared himself a cosmopolitan. So cosmopolitan than Sinop’s name and fame transcends our planet Earth nowadays. One satellite of Jupiter is named after Sinop, as a crater on Mars. You and me may go there to look for Diogene.