You remember the awesome journey into Wadi Hadramout and Wadi Doan in southeast Yemen. Both valleys are part of Hadramout hinterland, which nurtures strong geographical, historical, cultural and economic ties with the Yemeni shores of the Arabian Sea. Moreover, the coastal part of Hadramout (Coastal Hadramout) played a pivotal role in the flows of people and goods between continents and civilizations.

As illustration, Qana was well connected to the overland commercial routes crisscrossing the Arabic peninsula with precious goods such as frankincense. In addition,  the sea port town (nowadays named Bir Ali and located in Shabwah governorate) acted the main Hadrami commercial hub between Africa and India.

Fond of sea, history and cultural encounters, I could only love Coastal Hadramout.

Capital town of present-day Hadramout, Mukalla displays a unique blend of Arabic but also Asian and African cultural legacy. The area is under Omani rule until Mukalla’s foundation in the 11th century. Then many local Hadramis travel overseas to trade and even to settle down. Those returning home bring back new ideas and styles to blend them with their Arabic indigenous culture, as for instance elements of Indonesian architecture displayed in Mukalla and more widely in Hadramout.

The tiny but iconic Al-Ghwayzi Fort used to command the main road access to the old town from the west during the Quaiti Sultanate (1858-1967). By a dim dusk light, the historical building looks proudly outlandish. 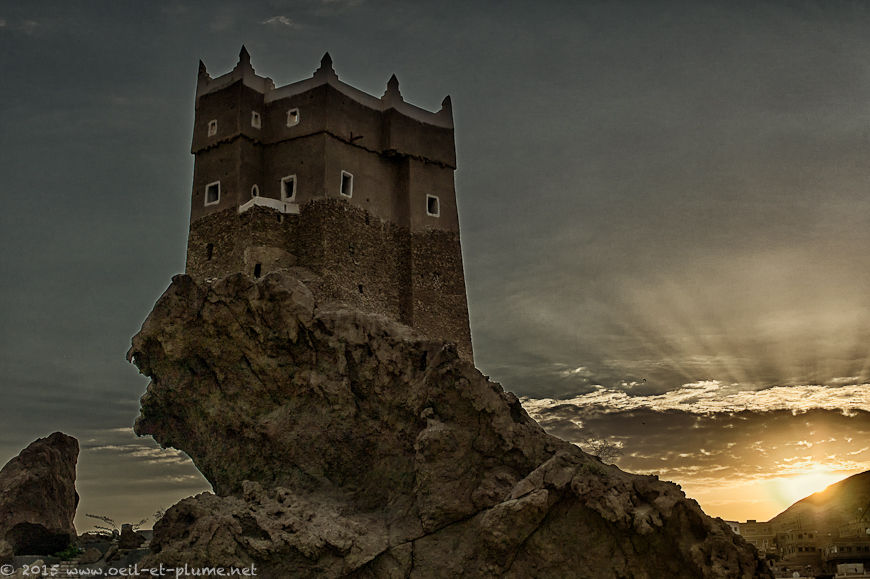 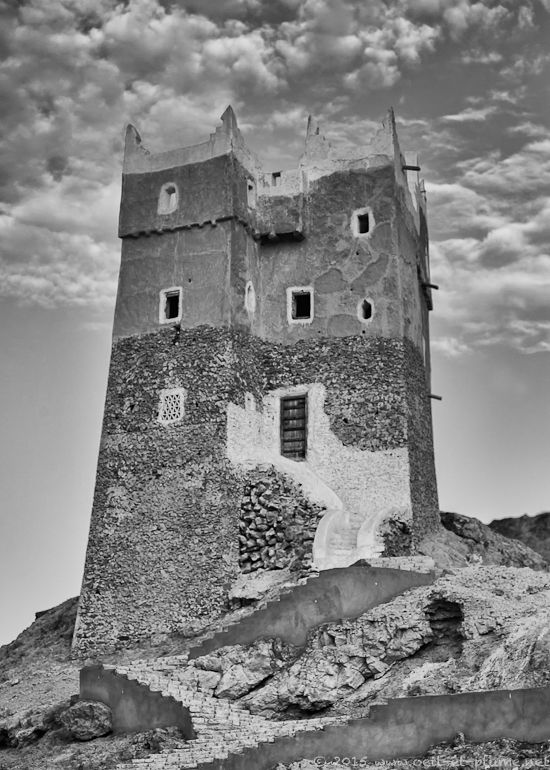 Passing the decaying Quaiti Palace, I head to the old town. On the surrounding hills, a string of former Quaiti military outposts dating watch tirelessly the horizon, far into the Arabian Sea. 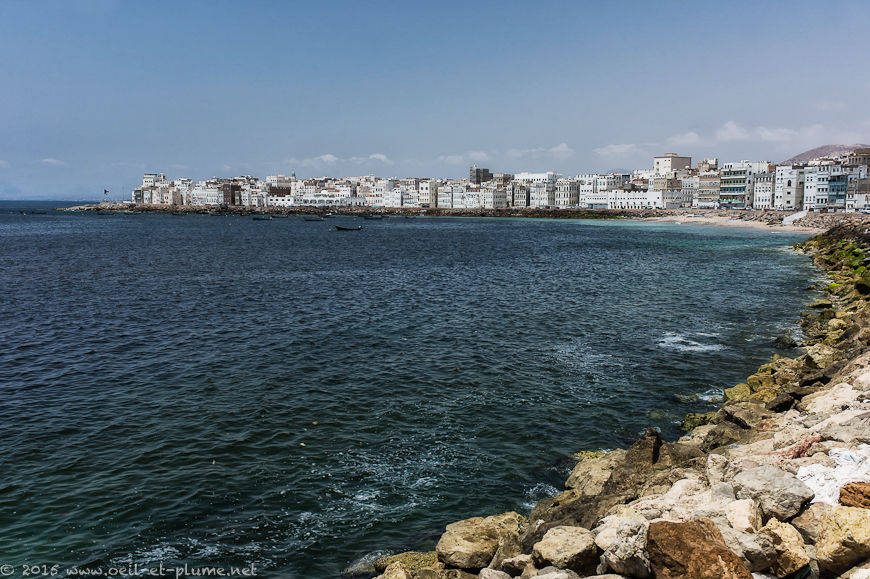 Mukalla’s old town is crowded and busy but also charming. The sea front displays a Manhattan-like architecture, small-sized and Hadrami style indeed. Goats are plentiful, often mingling with cars and pedestrians in the urban landscape. 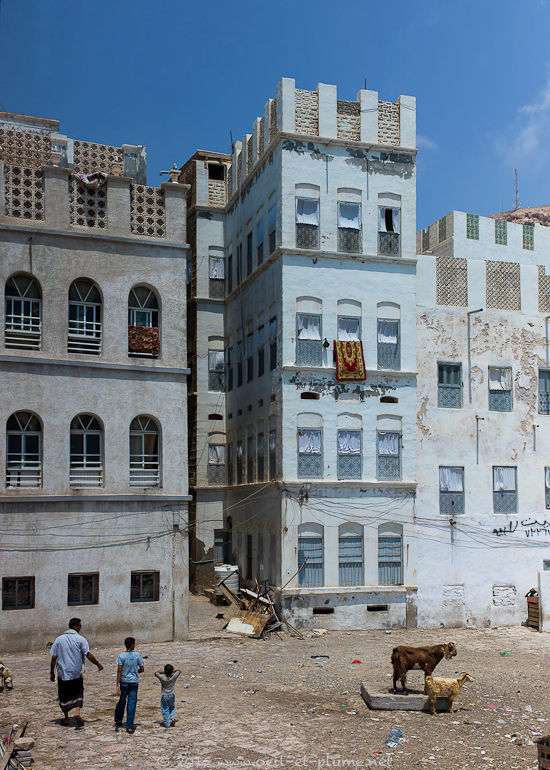 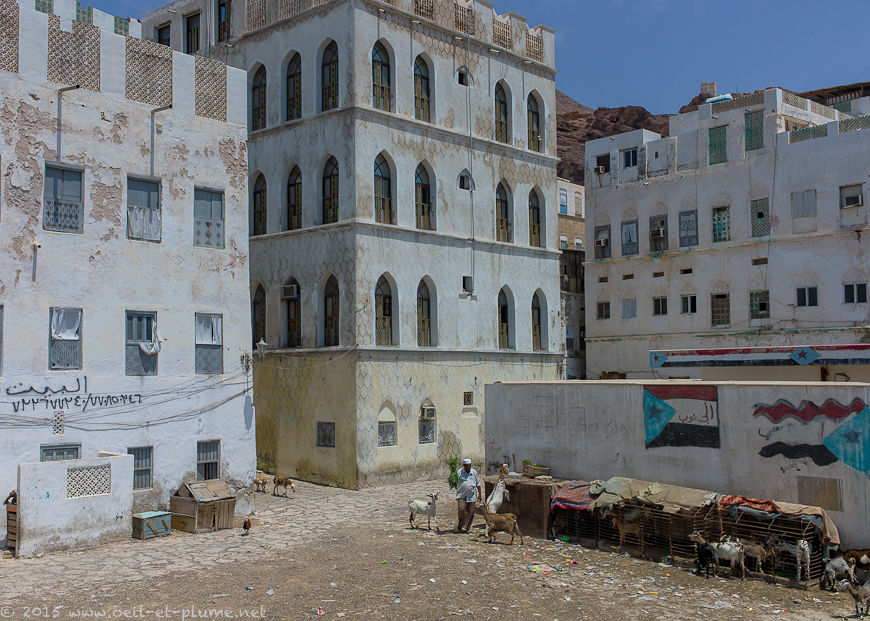 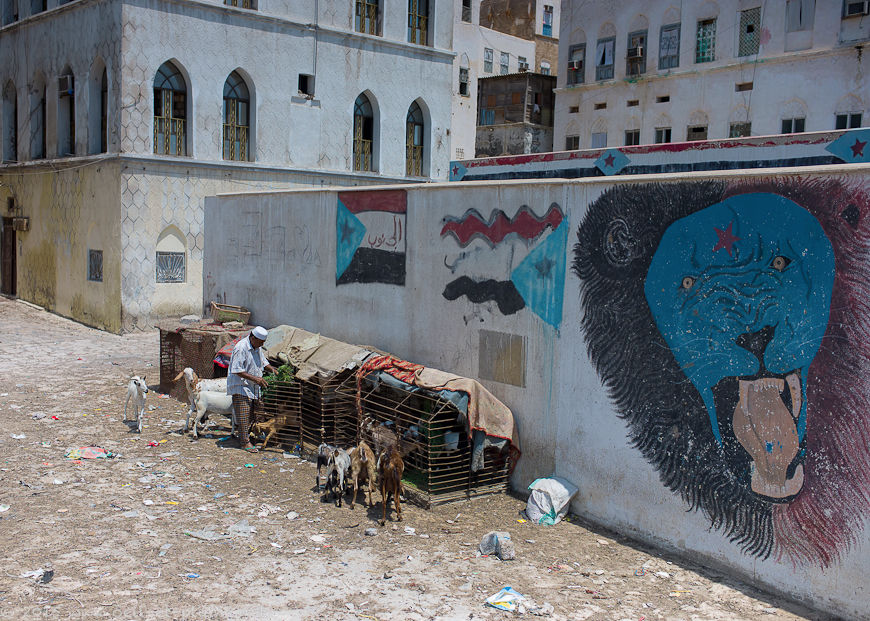 Let’s enter the local market area. As this is a women’s market in fact, there are 1,001 items useful in a Yemeni home and 101 goods to enhance female beauty. One local resident spontaneously guides me to a beautifully adorned house nested near the mountain. People smile at me and shake hand, happy to see a foreign face. 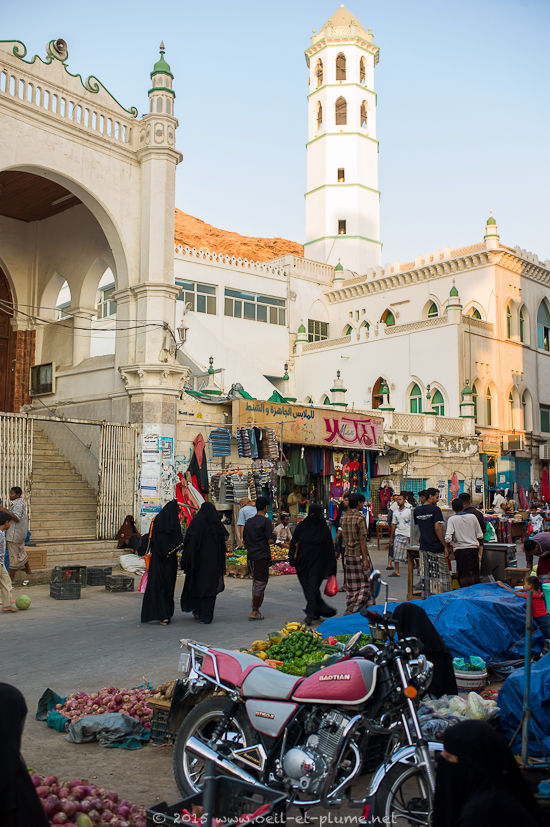 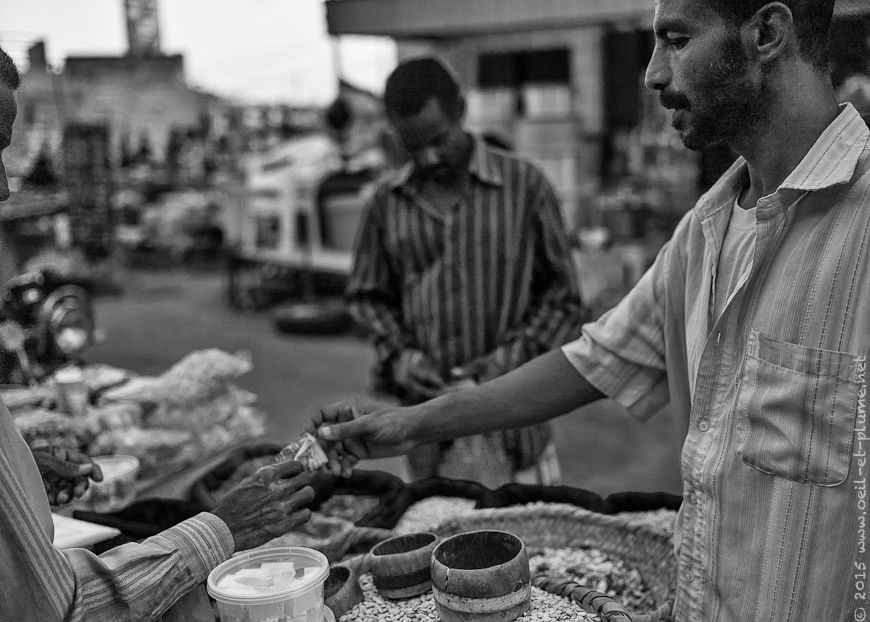 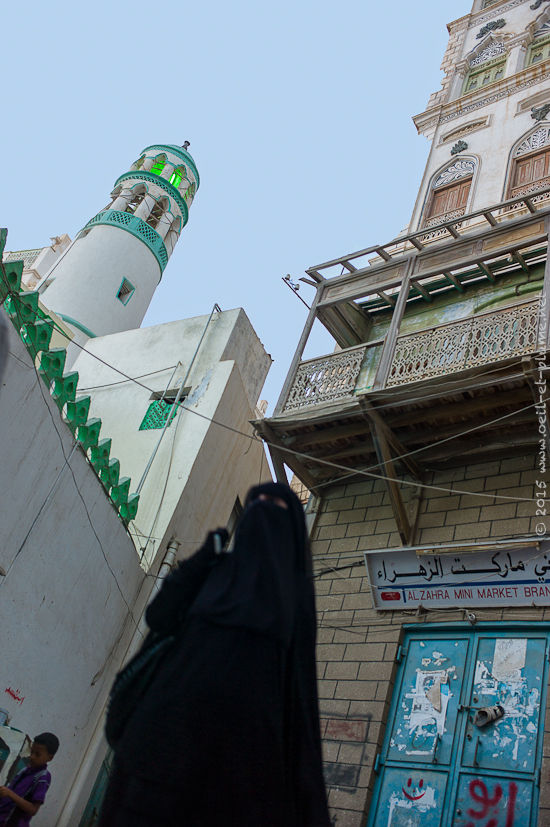 Mukalla old town hosts also a library founded by one of the Quaiti sultans. There were no visitors and readers at the time of my visit. The official in charge complains that younger generations prefer the mass information available online rather than his library resources. Half serious, I suggest him to open an Internet café within the library to attract them. The official scratches his head and smiles diplomatically.

Back on the sea front, a man with his three children observes serenely the sea. Dozens of fishermen boats swing lazily in the crescent-shaped sea bay. On the beach, a few boys train on fishing. Their small catches are not to be compared with those sold in the fish market. 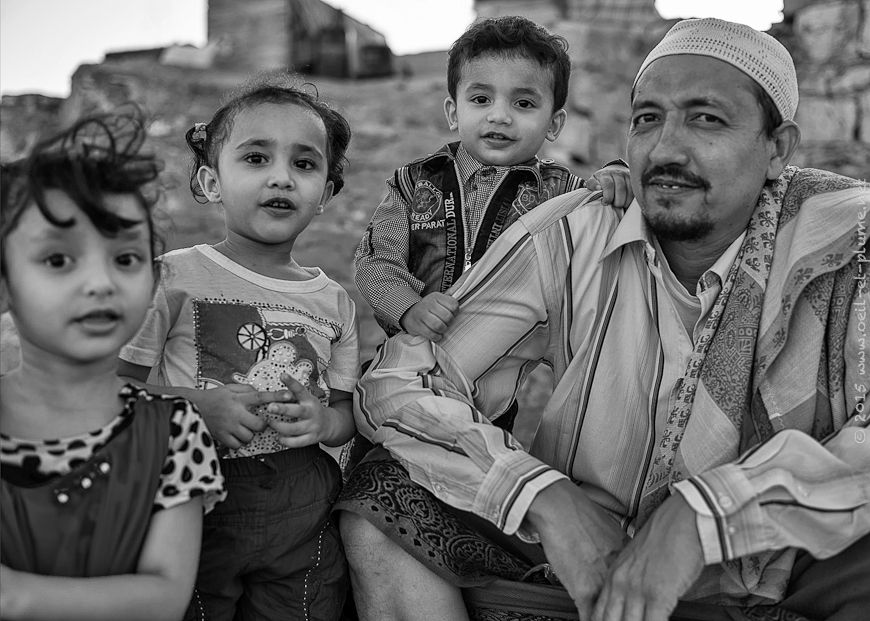 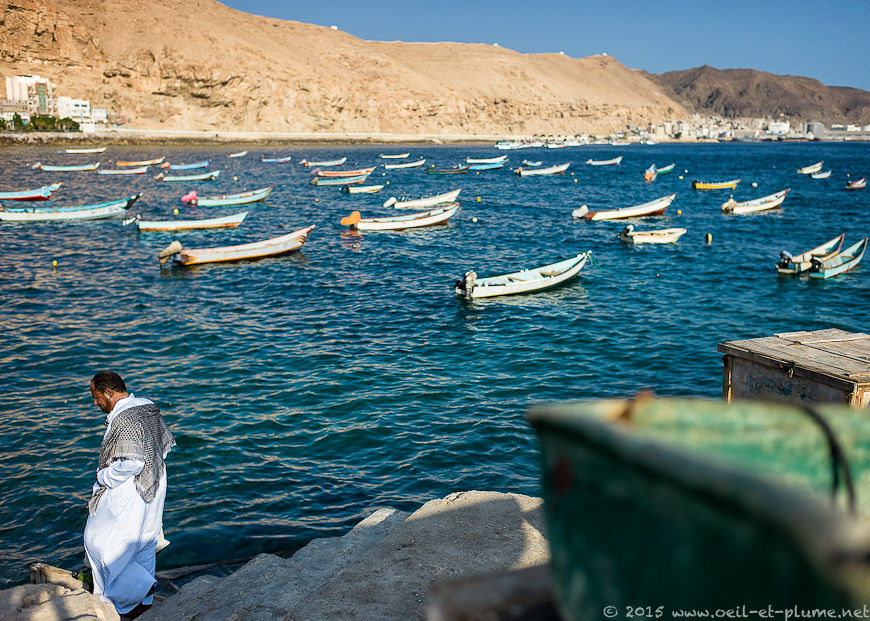 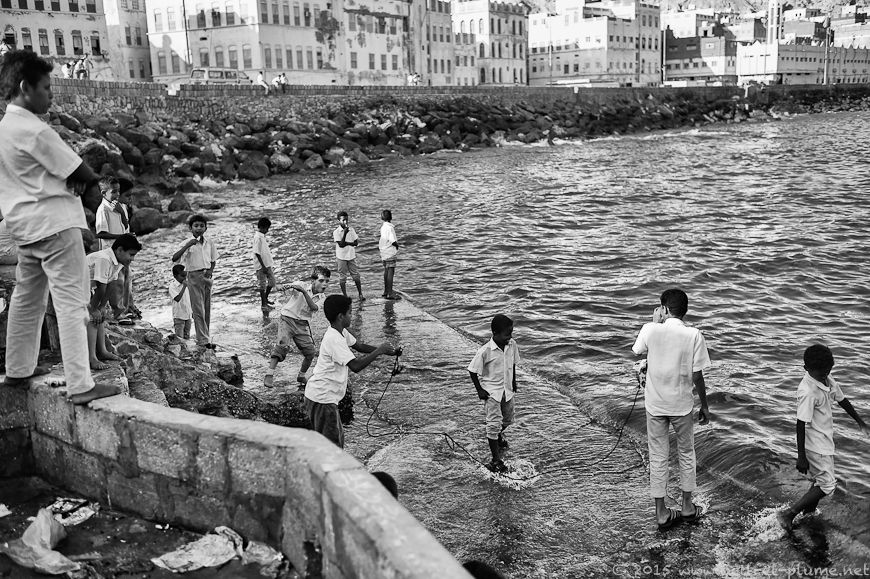 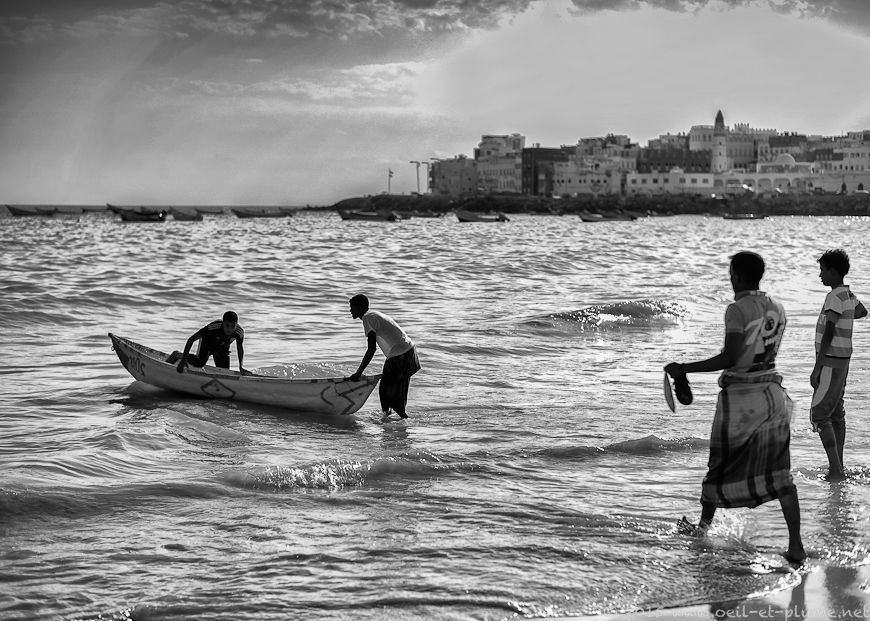 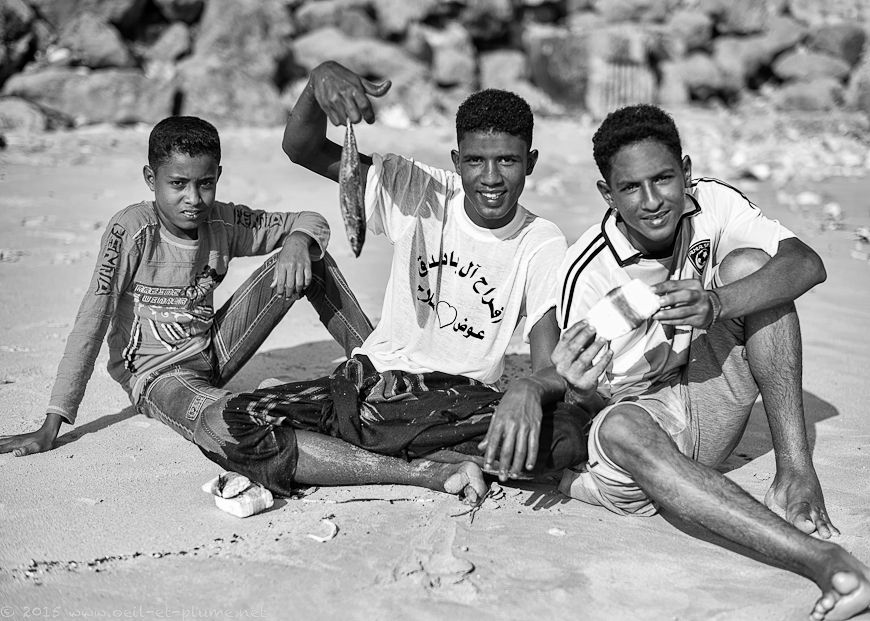 Ah, the Mukalla fish market! True, this is noisy trading place inhabited by strong smells, but also a visual and gustative festival of maritime species – fresh or dried. The local restaurant gathers folks round the clock. Don’t repeat it in Aden who claims to be the best in class: I savored in Mukalla fish market my finest fish dishes in Yemen. 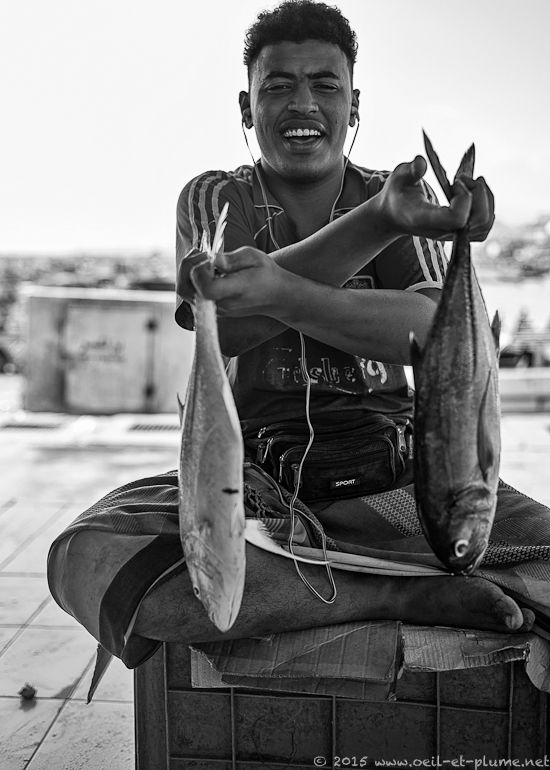 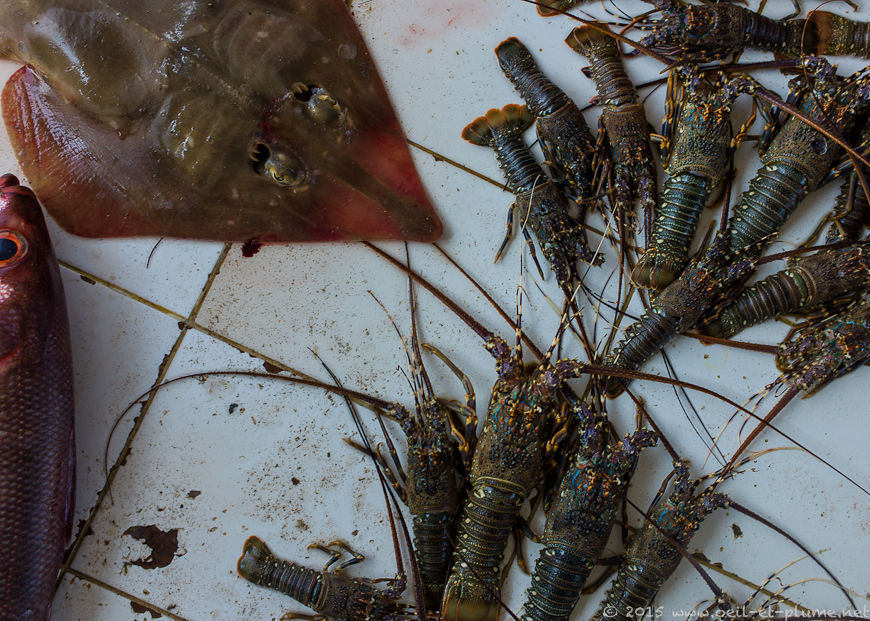 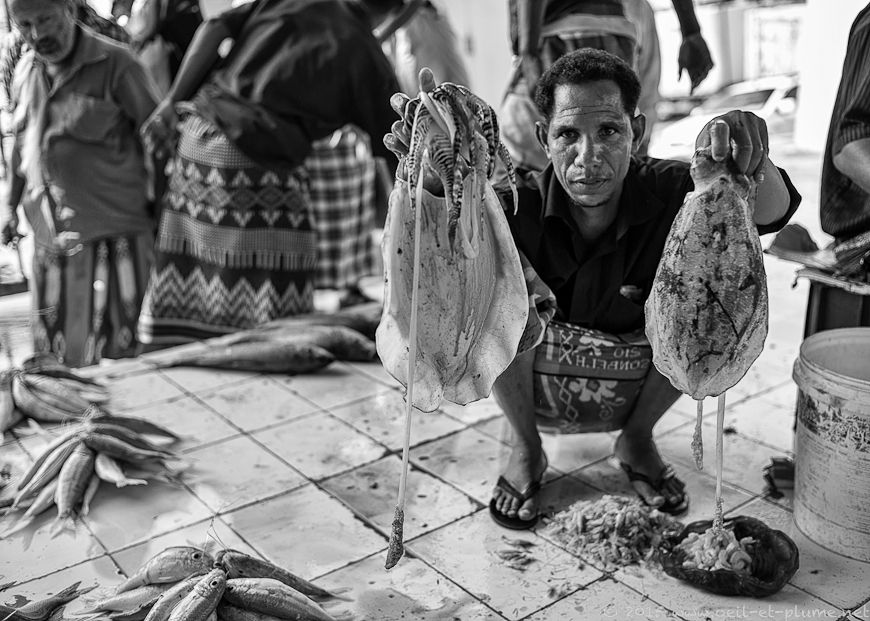 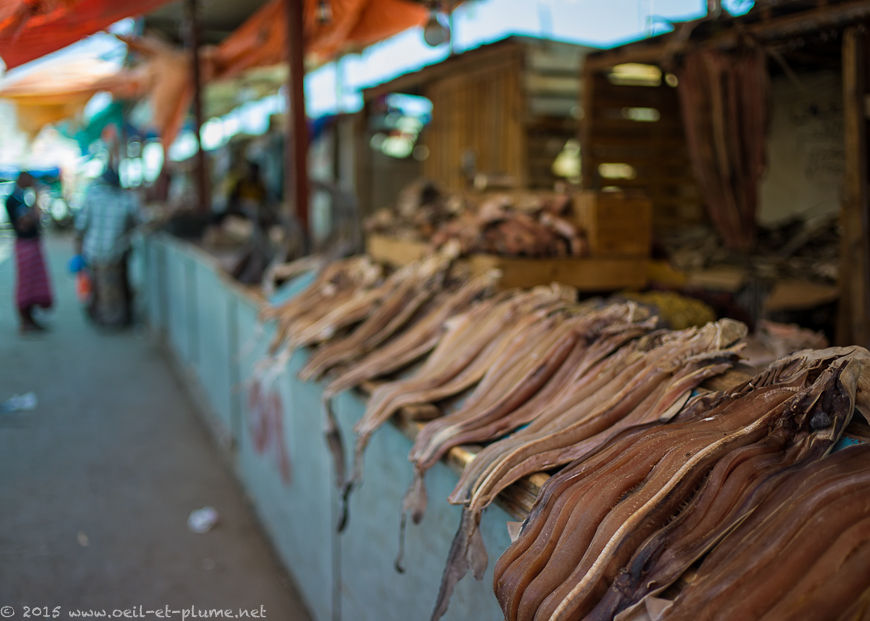 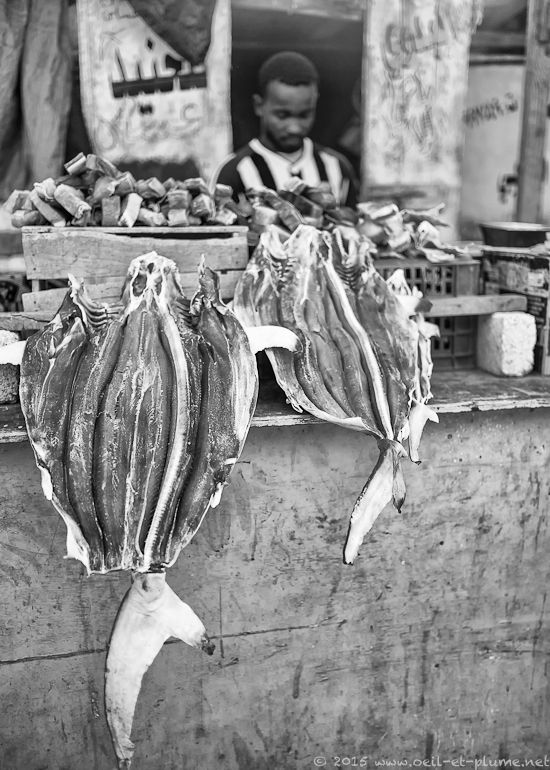 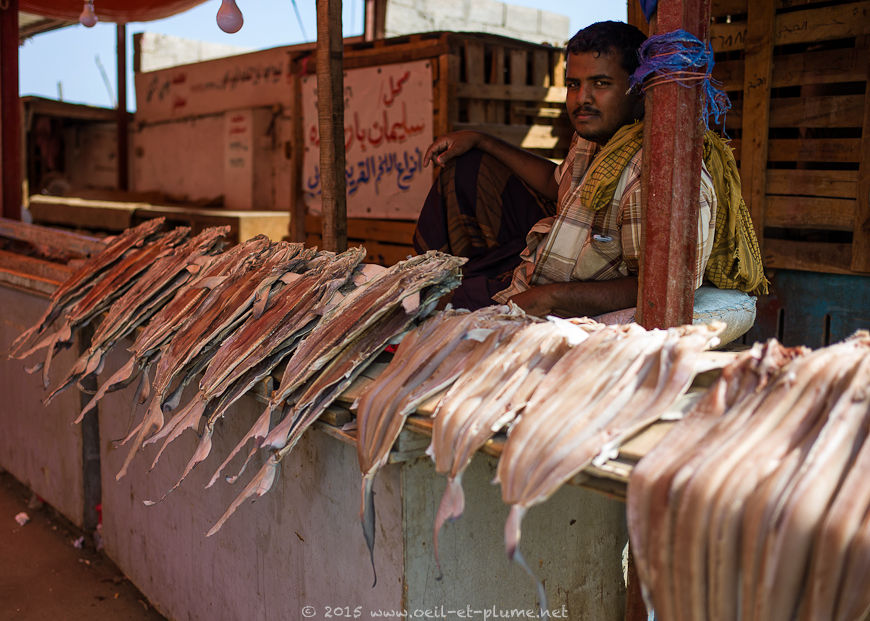 As in Aden, the beach in Mukalla old town turns into a series of football playgrounds by sunset. Soccer teams are structured along neighborhoods and age classes. Games are carefully planned and monitored, as they are passionately played. Yes, football is a serious matter in Mukalla as well. 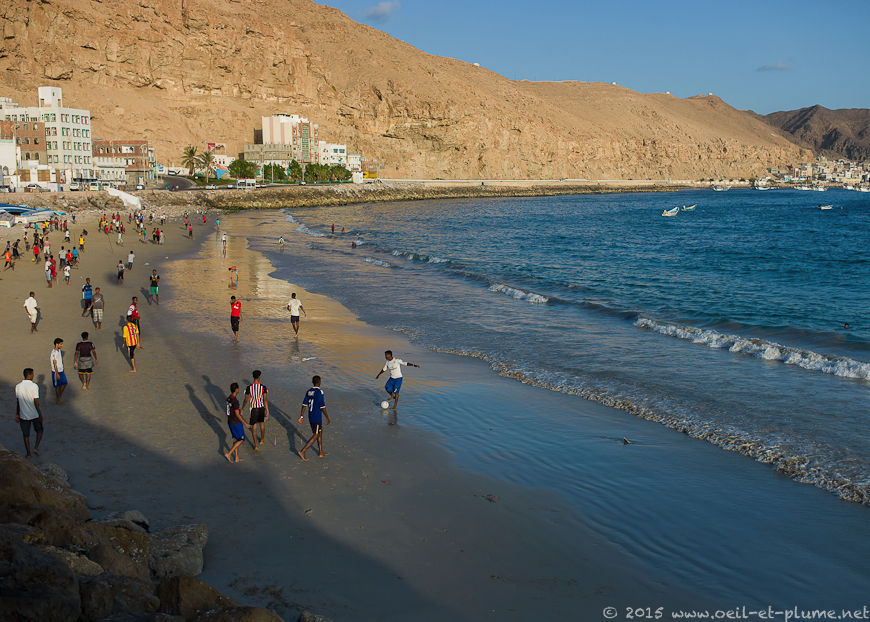 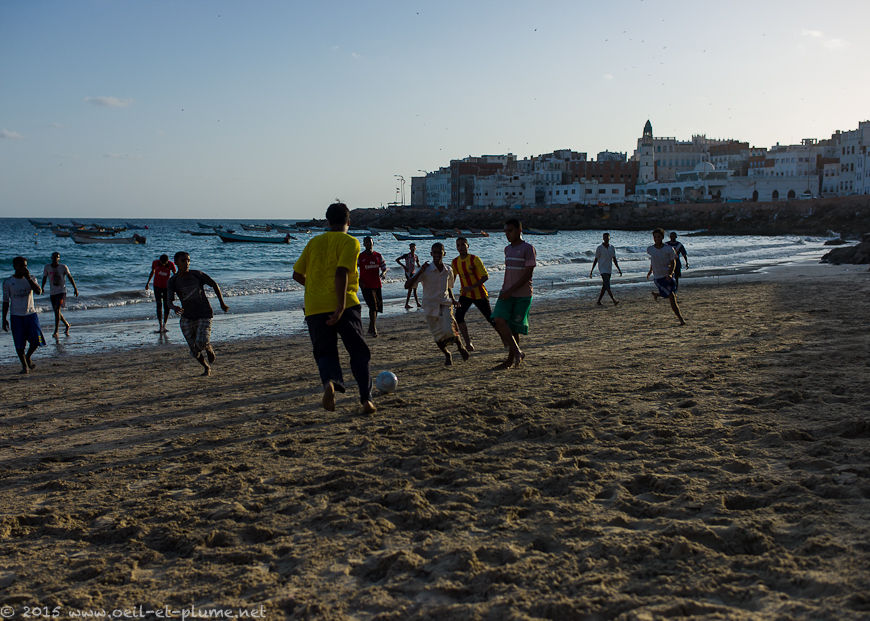 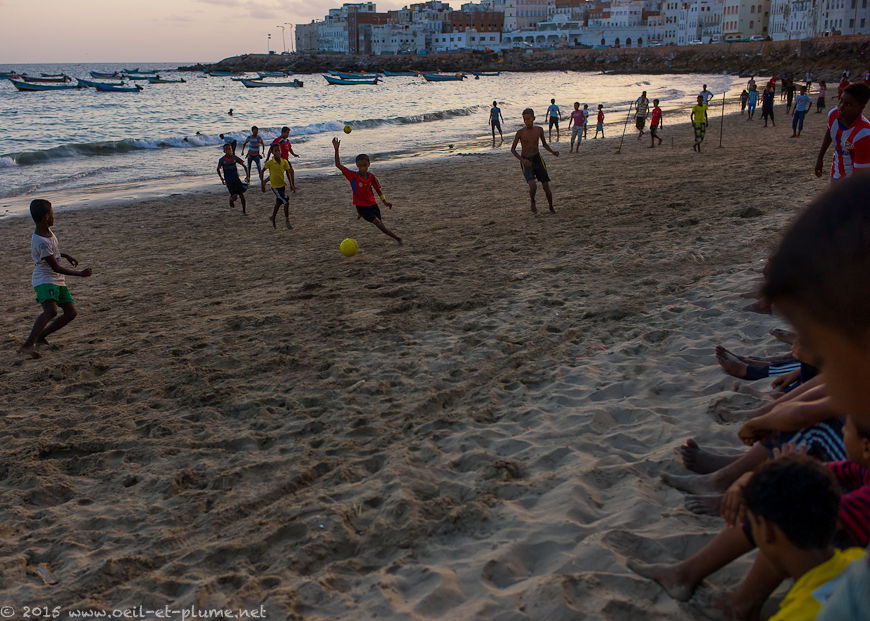 It is time for Mukalla to rest overnight. I will continue my journey in Coastal Hadramout tomorrow, visiting less well-known but beautiful locations. 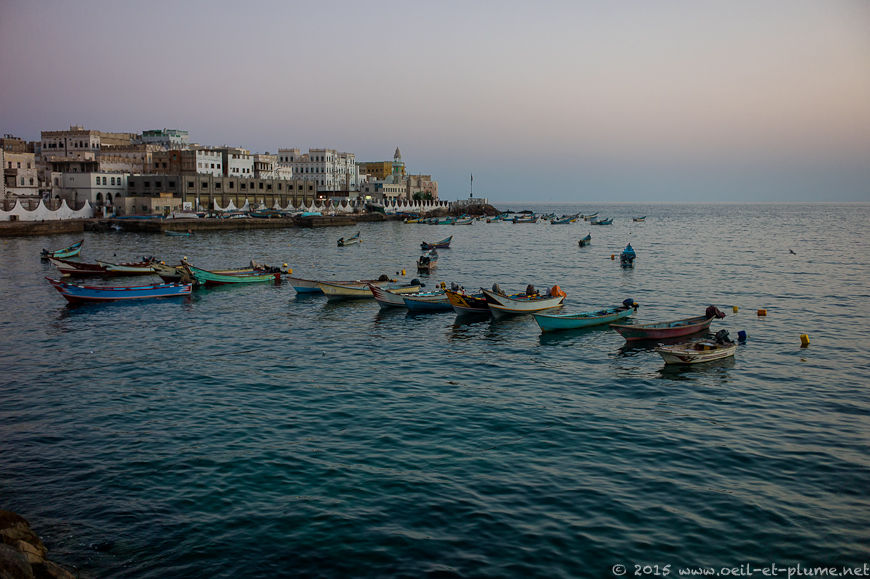