I ignored all about Camelot prior to my recent visit to Gonder in northern Ethiopia. 12th-century French romances name Camelot the castle, court and town associated with the legendary King Arthur and the Knights of the Round Table. Somewhere in England, Camelot is said to stand along a river, surrounded by vast plains and dense forests. The town comprises a splendid cathedral that serves as spiritual base for the Arthur’s Knights.

In  a quite European-centric perspective, Gonder is often referred to ‘Africa’s Camelot’. For sure, Gonder is an evocative place. Capital of the Ethiopian empire from the mid-17th to the mid-19th centuries, Gonder becomes a mythical place in the Old Continent during that period.

As a matter of fact, only a handful of Europeans visit Gonder for about two centuries. Those happy-few visitors report such a magnificient imperial court in Gonder that their accounts are often bluntly dismissed back in Europe.

With the Ethiopian orthodox christianity as cornerstone of their political power, Gonder’s successive Emperors ban Europeans from their empire to curb the dissemination of catholicism in Ethiopia carried out by Portuguese Jesuites until the mid-17th century.

Ethiopian emperors move their camps frequently until the 17th century. Emperor of Ethiopia from 1632 to 1667, Fasiladas elects Gonder in 1636 as his permanent capital. His main local architectural legacy is the founding of Fasil Ghebbi – the Royal Enclosure.

Fasil Ghebbi was the fortified residence of the Ethiopian emperor Fasilidas and his successors in Gonder. It covers no less than 70,000 sq metres, enclosed by a 900m-long curtain wall pierced by twelve gates. The residential and governmental complex contains various palaces, major halls, a chancery, a library and three churches. Fasil Ghebbi’s unique architecture combines audaciously Nubian, Arab, Hindu and Baroque influences.

Fasiladas’ Palace represents the cornerstone of Fasil Ghebbi. The restored building displays a sense of austerity and solemnity which perspires still the splendor of other times. From the topfloor, the view extends until Lake Tana and its famous orthodox monasteries. 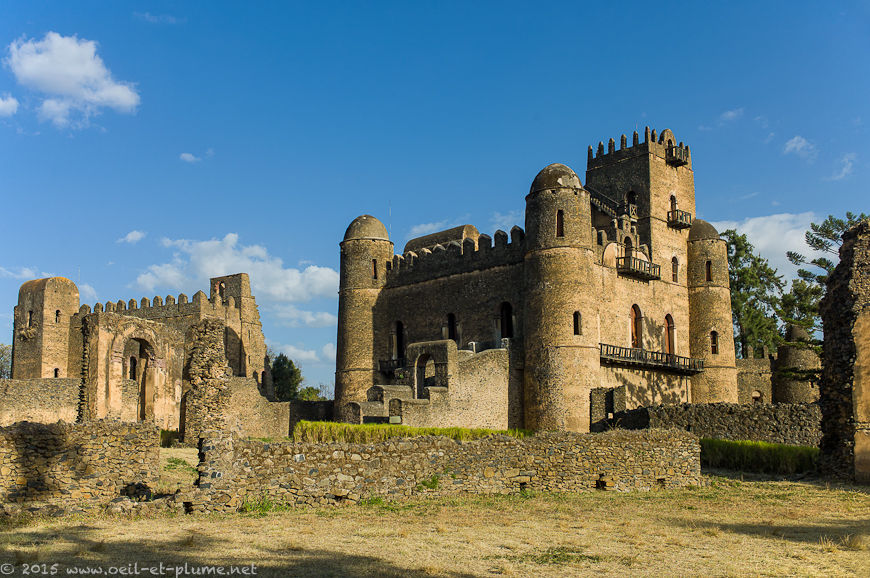 Fasiladas’ grand-son Iyasu the Great (1682-1706) is the most famous of the Gonder-based Solomite rulers. His castle in Fasil Ghebbi is said to have eclipsed the splendid House of Solomon. Visitors describe its inner walls decorated with ivory, Venetian mirrors and delicate paintings of palm trees, while the ceilings covered with gold-leaf and precious stones.

Gonder’s rulers held somptuous feasts and maintained an extravagant peagantry. Arts florish under the patronage of the imperial court. Literature, philosophy, poetry are fed by abundant translations of key Arabic, Hindu and Latin publications into Amharic.

Gonder of yesteryear is made of splendor and refined lifestyle, but as well of brutality. Court intrigues often lead imperial family members, nobility, clergy or royal guards to conspire and plot against the Emperor. The authors of failed attempts are publicly executed alongside criminals. The latter are slained and hung, with their dead bodies left to the hienas and vultures.

Tribal feuds, political rivalries and foreign invasions end Gonder’s goldern age in the second half of the 18th century. The town is plundered and burnt in 1864-1866. Sudanese invaders sack Gondar in 1887-1888, setting fire to almost all city’s churches. Fasil Ghebbi is not spared from the turmoil. After having suffered an eartquake early 18th century, Fasil Ghebbi is severely damaged by a British areal bombardment during WWI that targets Italian troops headquartered in the former imperial complex. 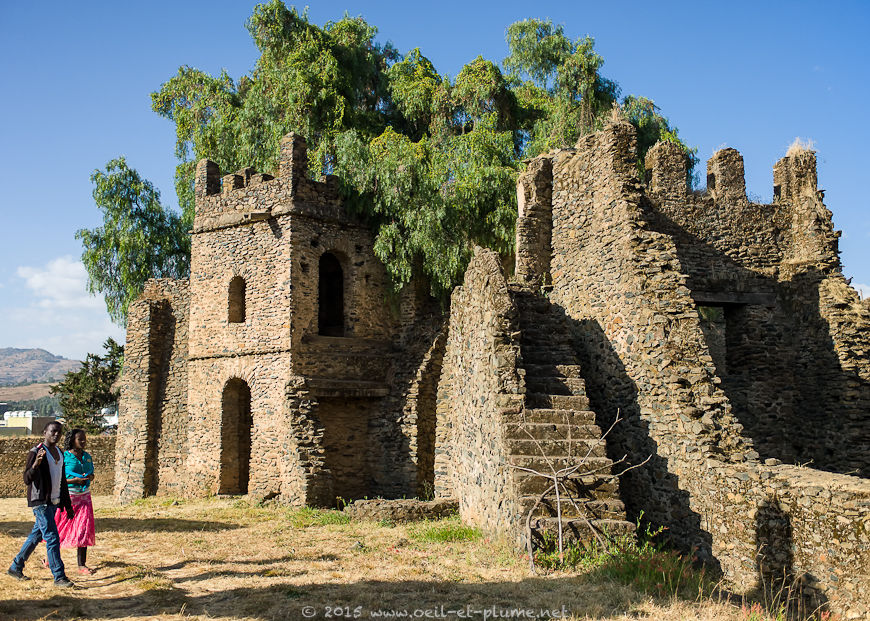 I spend quite some time in Fasil Ghebbi, selecting quiet time slots and corners to attempt reconstituting the former splendour of the imperial complex in my mind. Eventually, I feel ripe for an extensive encounter with the contemporary Gonder.

South of Fasil Ghebbi lies Adababay, where official proclamations, parades and public executions were carried out at the time of Gonder’s Empire. The place is now turned into a small park.

Downtown Gondar is nicely named Piazza, in an obvious reference to the Italian occupation of the late 1930s. The main piazza features cafés, restaurants, shops, a cinema and other public buildings reminiscent of Italian cities. The central place and its surroundings burstles most of the day, crowed and cramped, dusty and noisy.

Coffee obviously connects also Ethiopia and Italy. Both coffee-loving countries cultivate a common passion for the dark and bitter drink while maintaining distinctive making-processes, Sipping coffee in Ethiopia is as usual as tea is appreciated in the Muslim world. 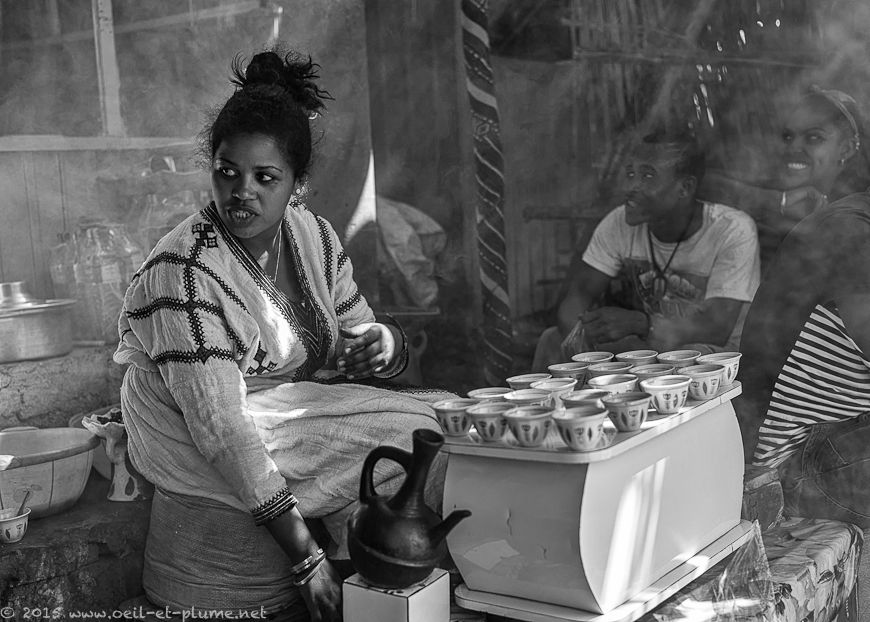 Coffee making and drinking in Ethiopia is traditionally subject to a ceremony involving relatives, friends and visitors. You have to smell at least once the delicious organic coffee beans roasted on a charcoal brazier before being grinded in a wooden mortar and processed in a pottery with boiling water. As the coffee is then poored over three layers of small cups,  expect to be served thrice. The smoky and odorant atmosphere may be enriched by burning frankincense. 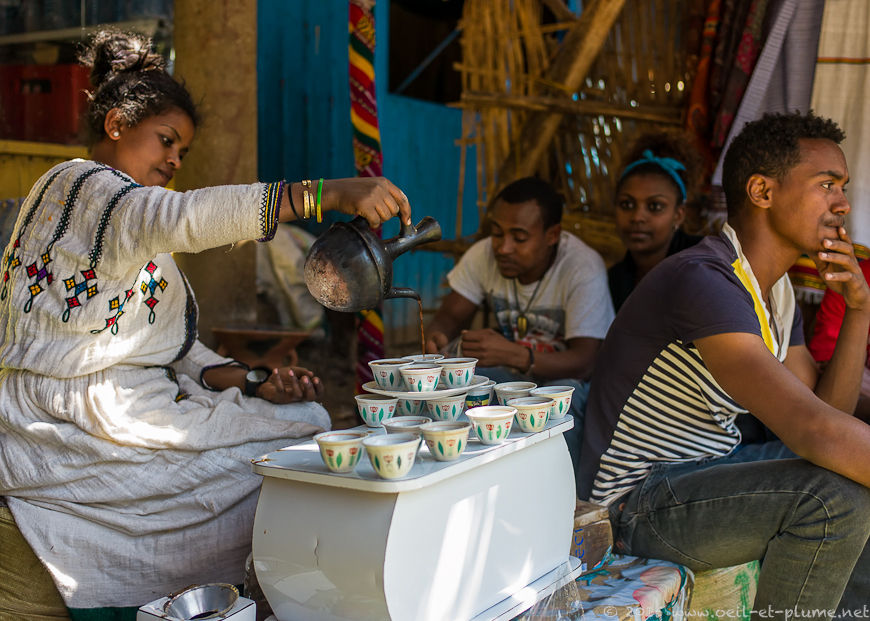 I feel now like venturing into the various neighbouhoods and to the central market (Mercato).

Gonder’s population is estimated to 60,000 in the 17th century. Following an imperial decret, residents are assigned specific neighbourhoods along class and religious lines: nobility resides in Qagn Bet, while lower-class Ethiopian orthodoxs dwell in Abun Bet – home to the nominal head of the clergy. On their side, Muslims and Jews live respectively in Addis Alem and Kayla Meda. Nowadays, only some references to that partitions are still visible. Ethiopian jews have left Gonder, while muslims are still living around a mosque located next to the central market.

I complacently dive into the dusty and hot Mercato, looking for photogenic and genuine expressions of everyday’s life. The endeavour proves to be less a hassle than expected, as local people are mostly cooperative and even proactive. The outcome of my photographic search is best appreciated without any further comment. 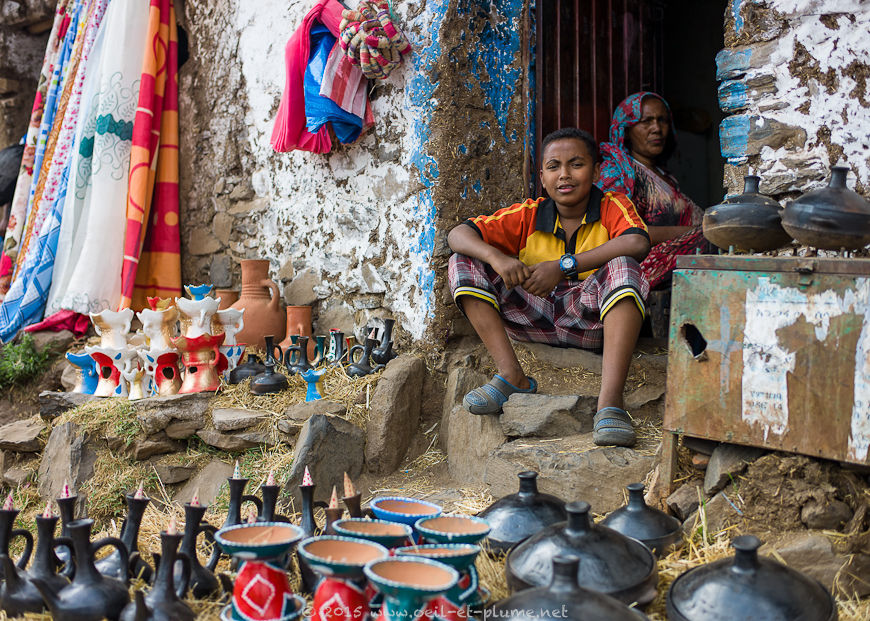 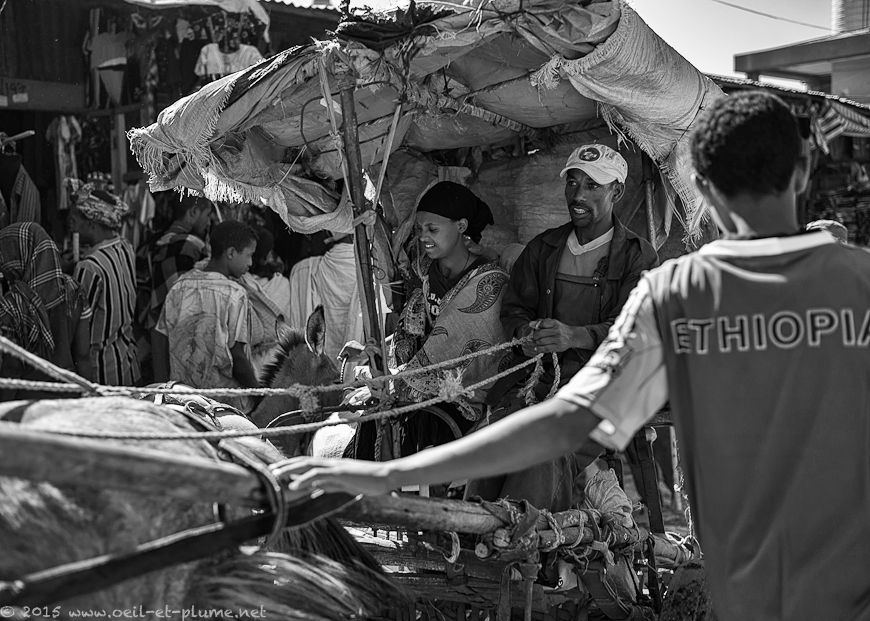 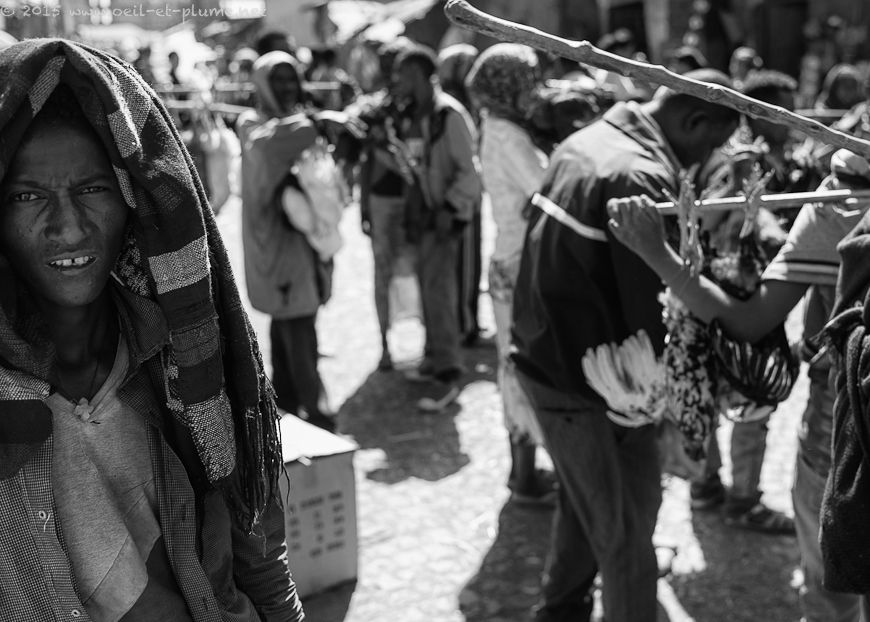 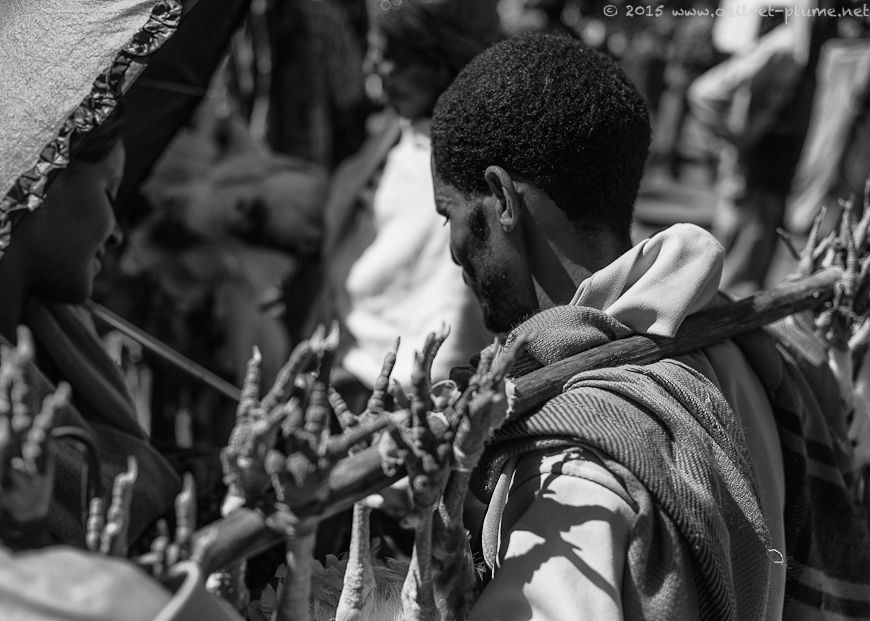 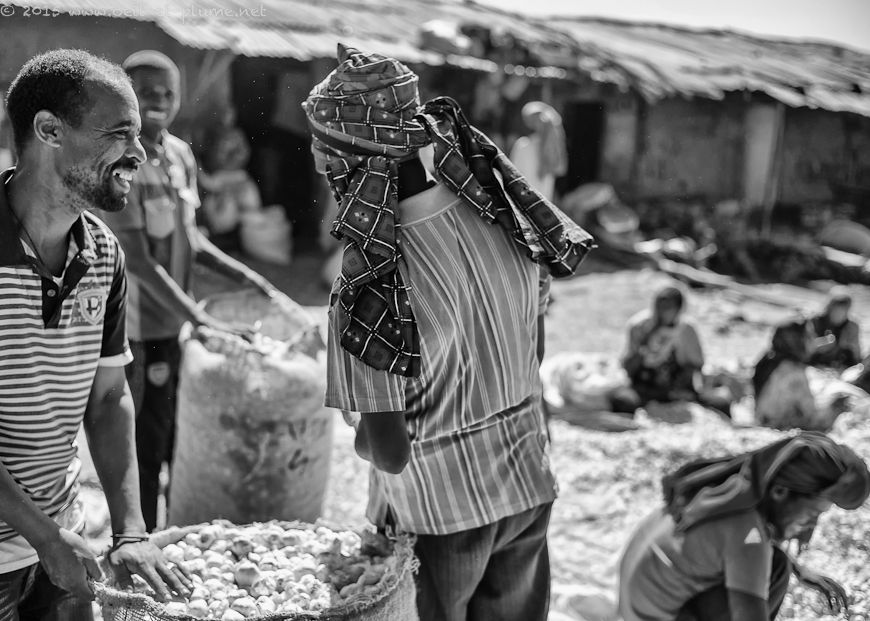 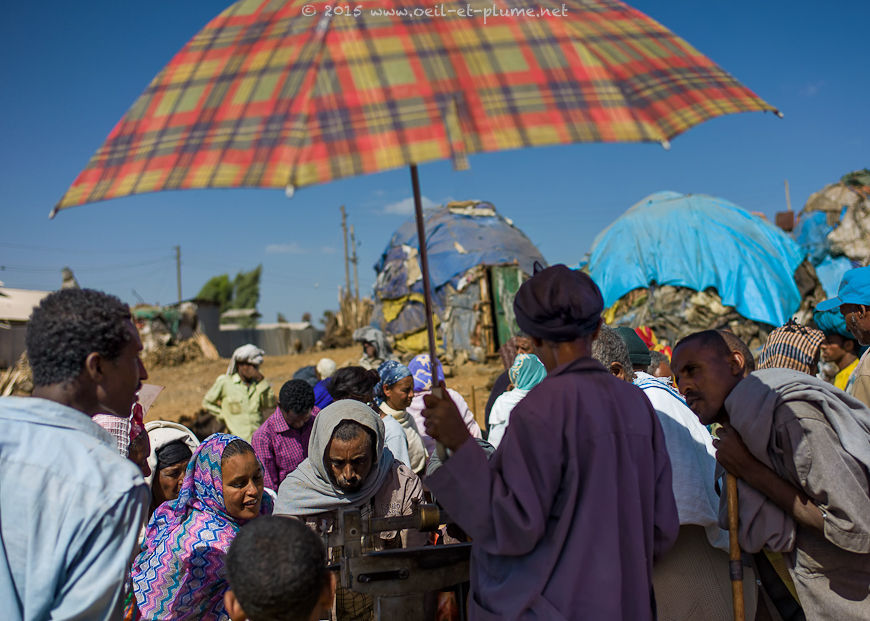 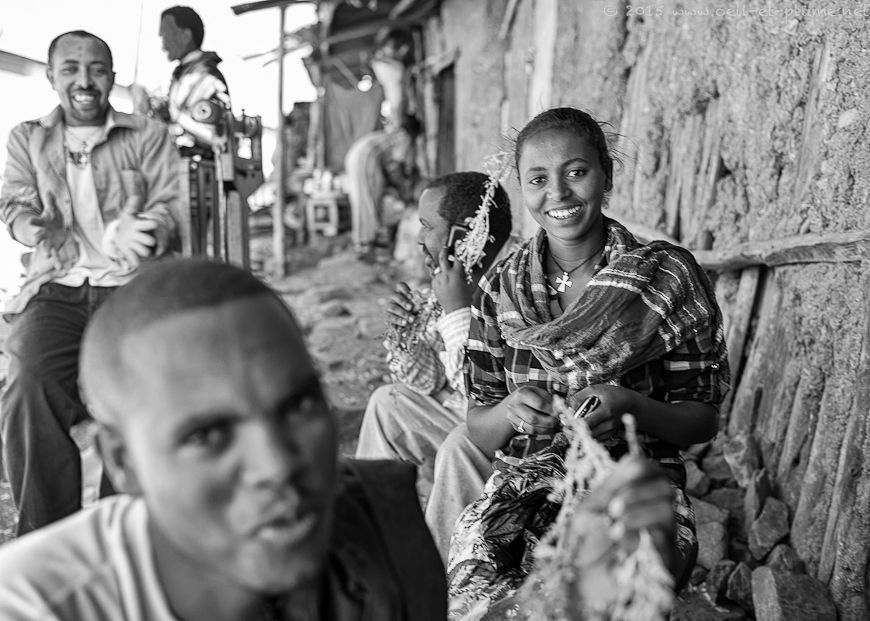 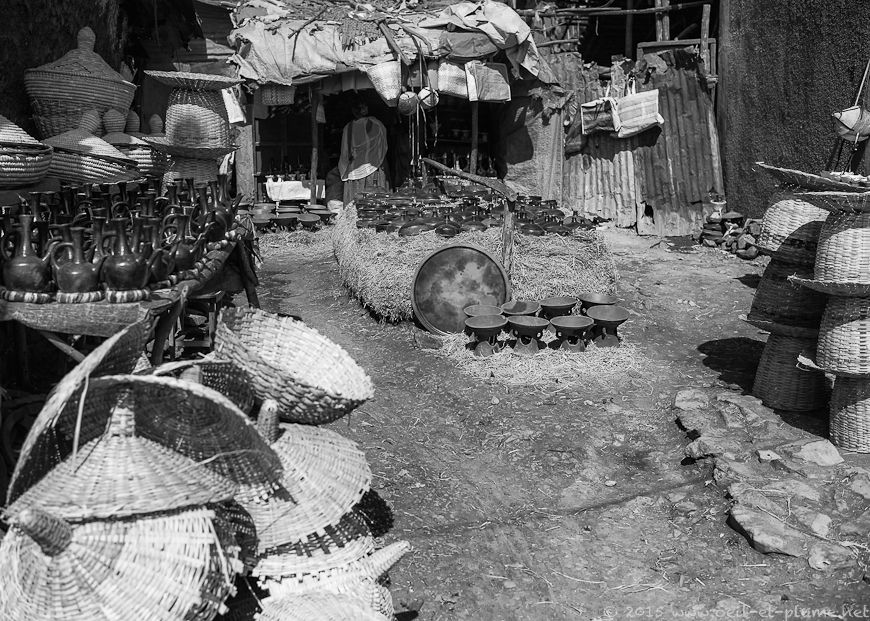 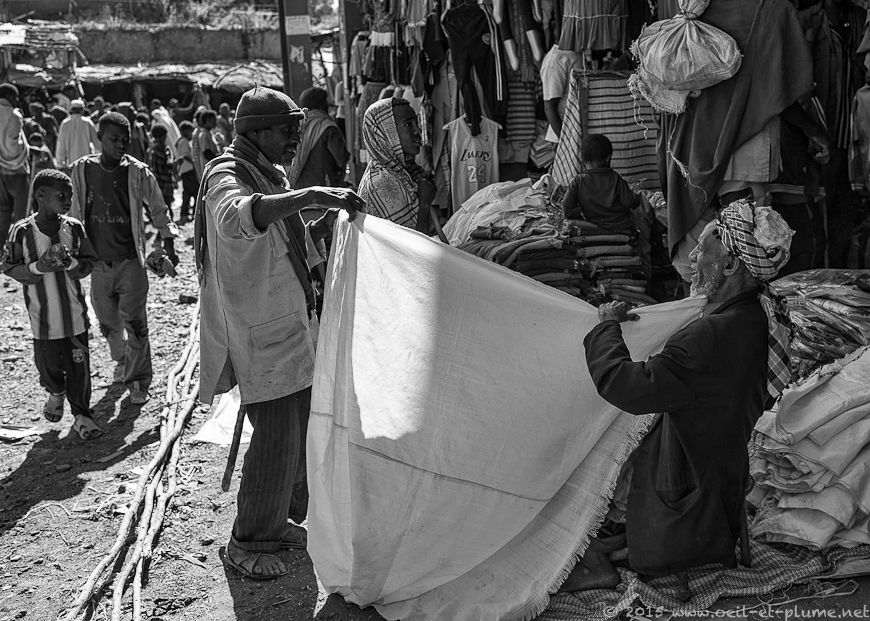 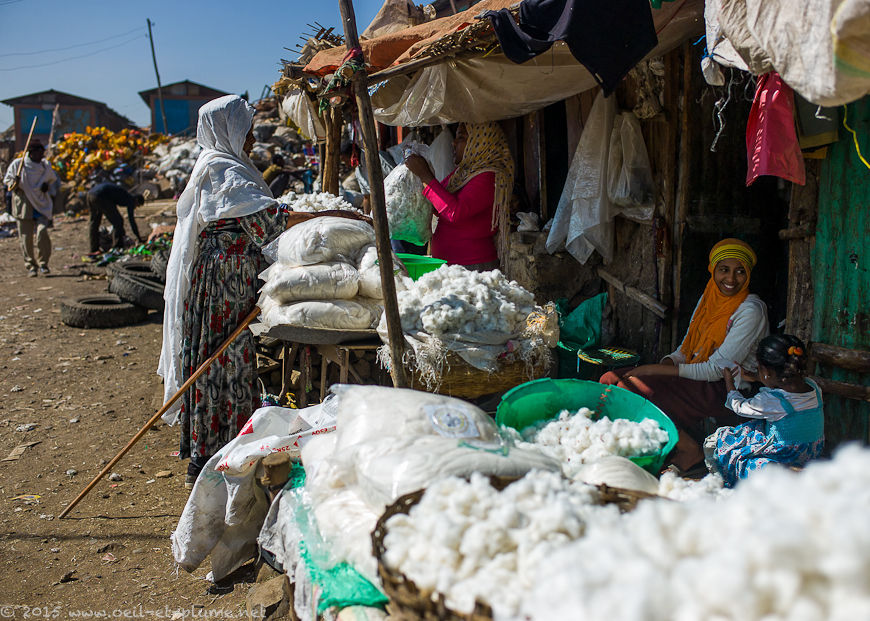 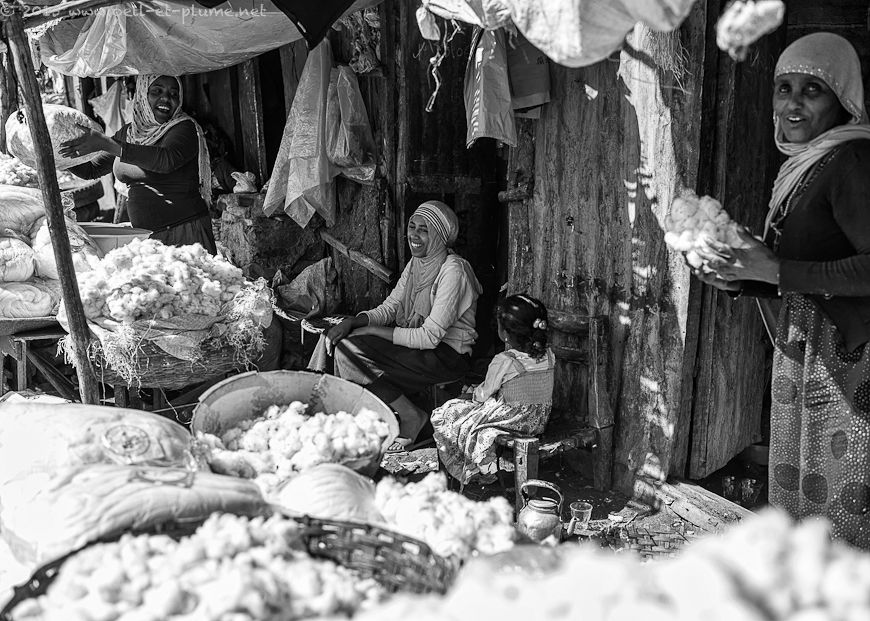 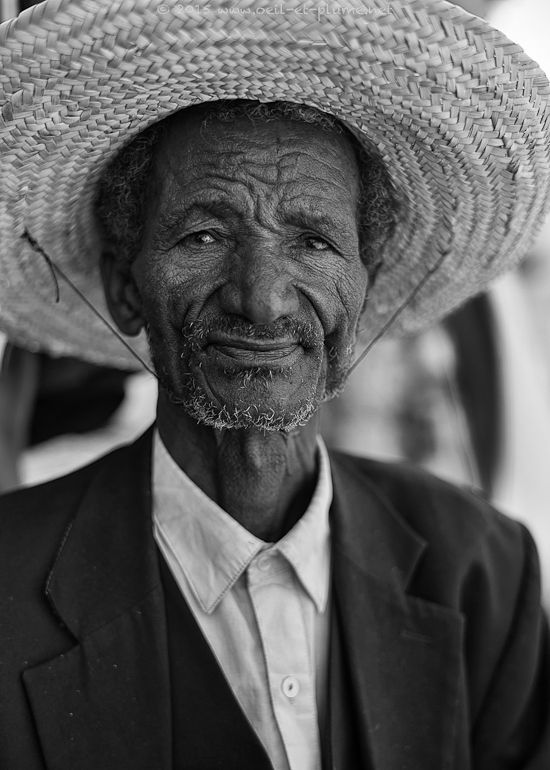 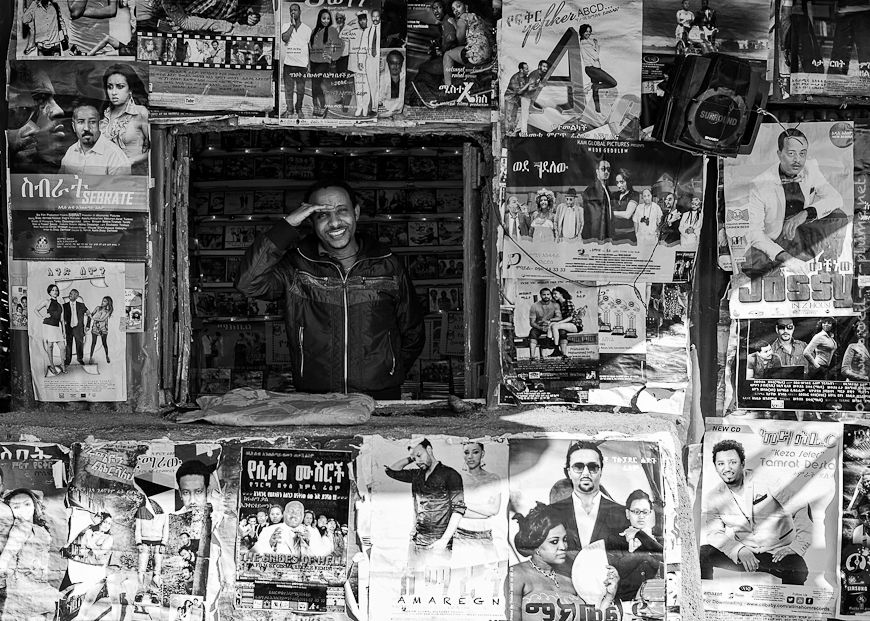 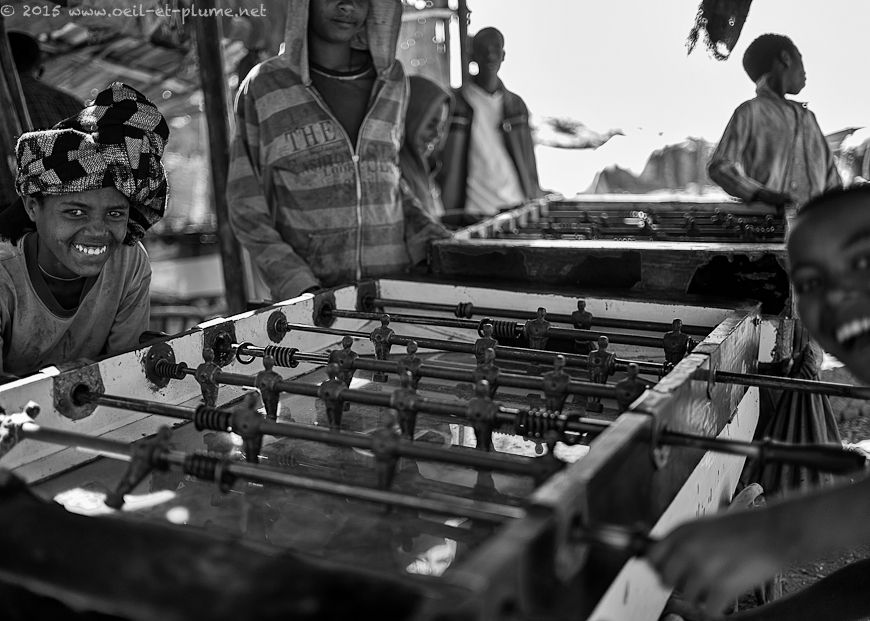 Moving out of Mercato, I spot some shops selling religious items such as bells, umbrellas, walking sticks. I dare a look into one of the many city’s churches. Orthodox faith is still very strong in Gonder. I shall visit the most famous of them. 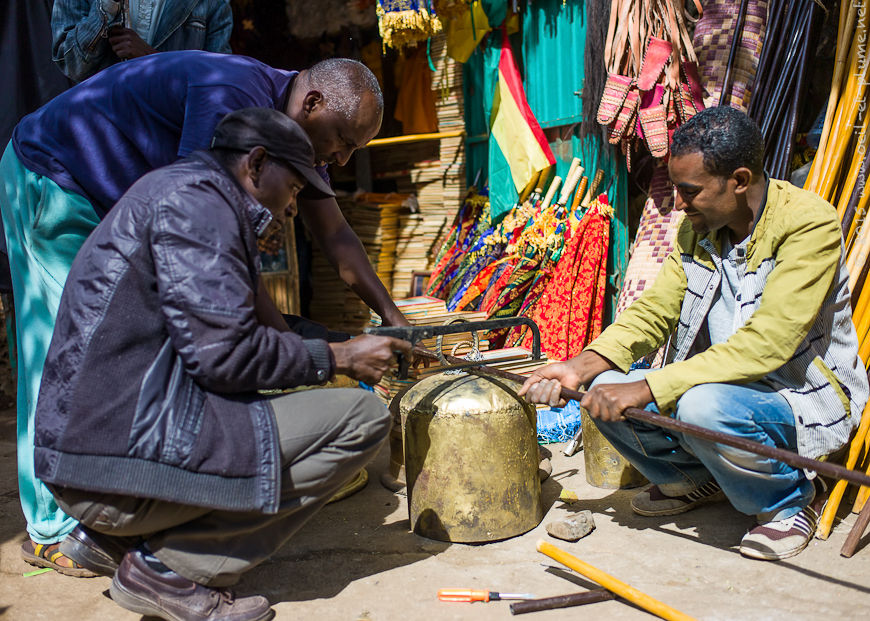 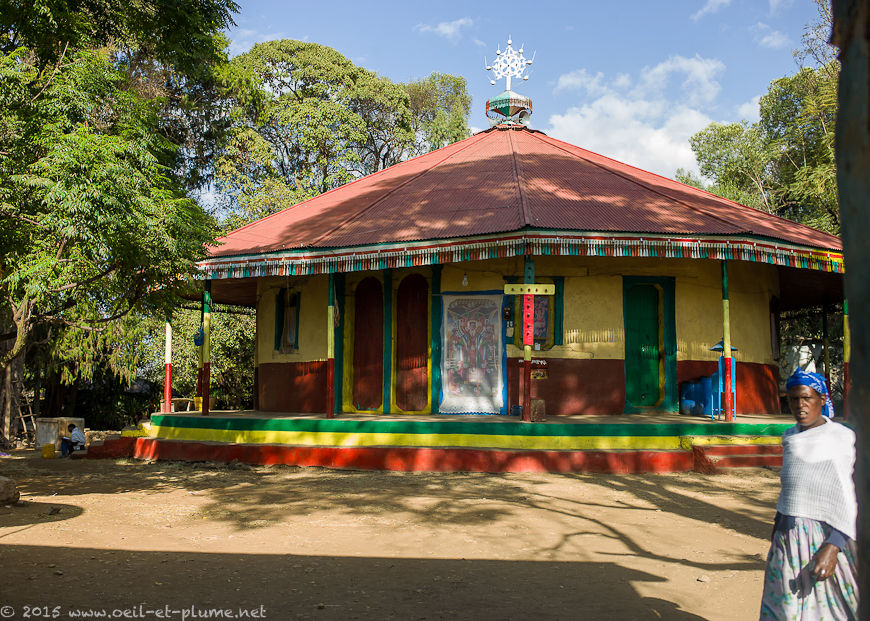 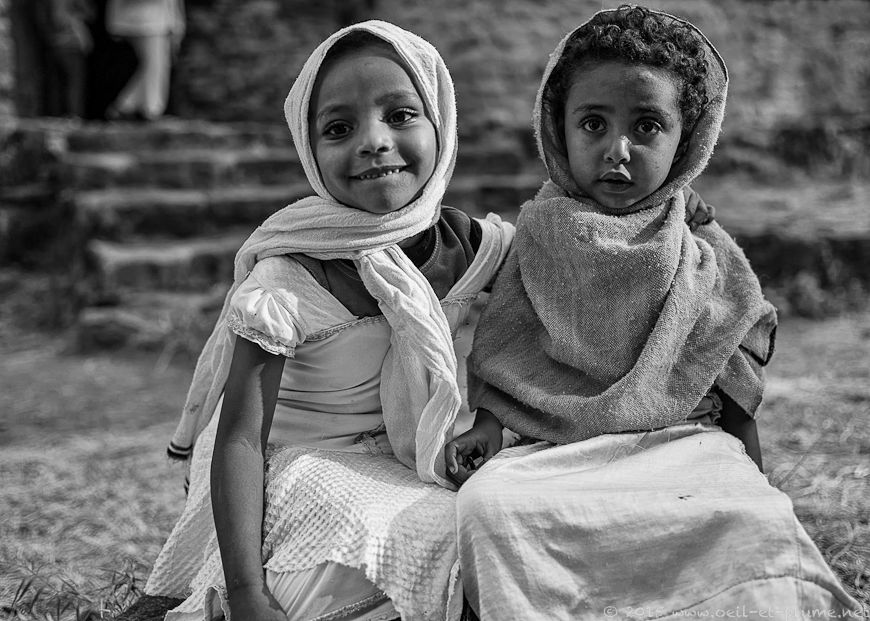 The Church of Debre Berhan Selassie (Light of the Enlightened Trinity) is arguably the most beautiful churches of its time and kind in Ethiopia. Built by Fasiladas’ grand-son Iyasu the Great in late 17th century, it represents Iyasu’s most lasting achievement. 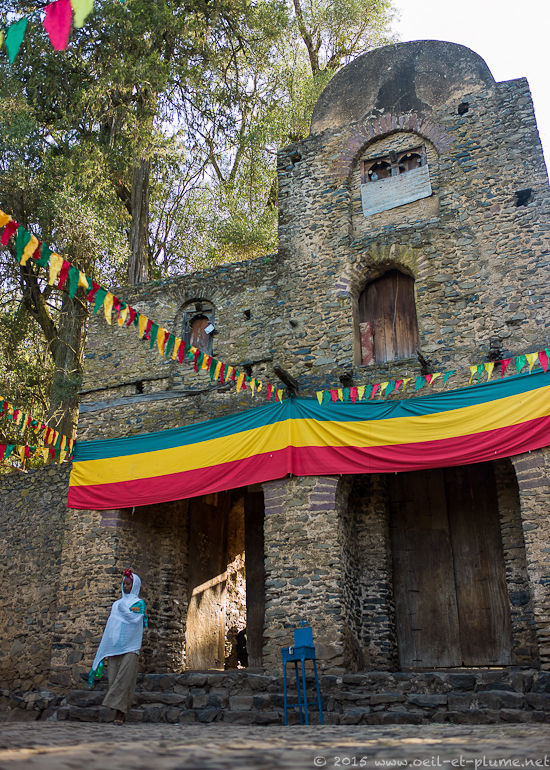 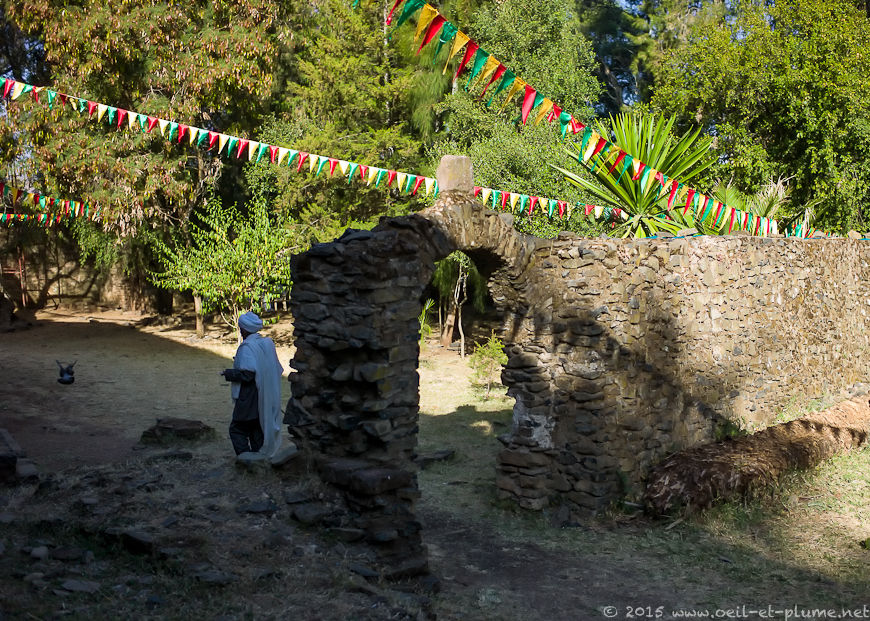 I visit the monument twice on early morning, shortly before Timket religious festival. Within the walled perimeter, the church stands modestly despite its prestigious history and destiny.

Its architecture is full of symbols and references to Ethiopian christian orthodox faith. The rectangular shape of the monument mirrors the Temple of Solomon in Jerusalem, as it was meant to host the the Ark of Covenant that the emperor Iyasu intended to move from Aksum to the new church in Gonder. Distributed along the outer wall, twelve towers symbolise the Apostles while the main gate is monitored by an architectural feature representing Jesus. 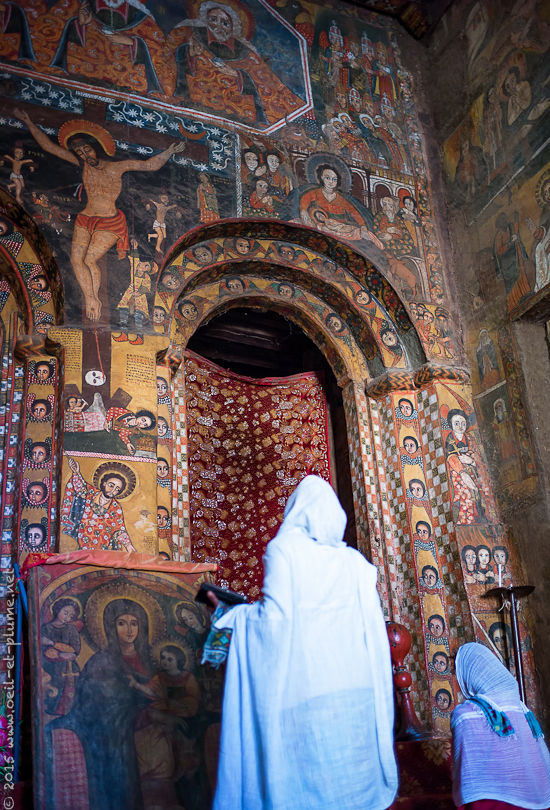 I venture in, after being reminded to remove my shoes. Yes, yes. The inner walls of the church are exquisitely painted with religious scenes. The room hosts only two female worshippers plus a religious figure. I risk a few pictures to capture the ethereal ambiance and leave discretely. 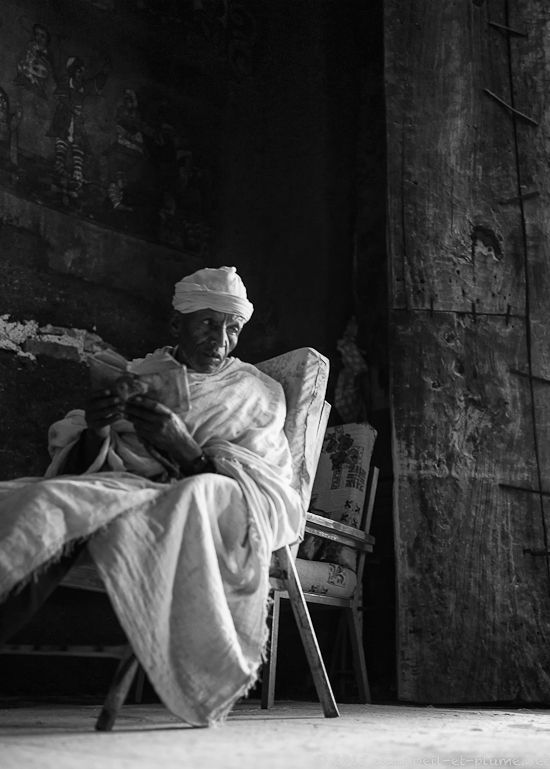 Outside, more worshippers pray in an outer gallery running around the church. The air perspires a genuine religiosity that I attempt to translate into images. A elderly couple dressed up for the Timket festival accepts to pose for me. 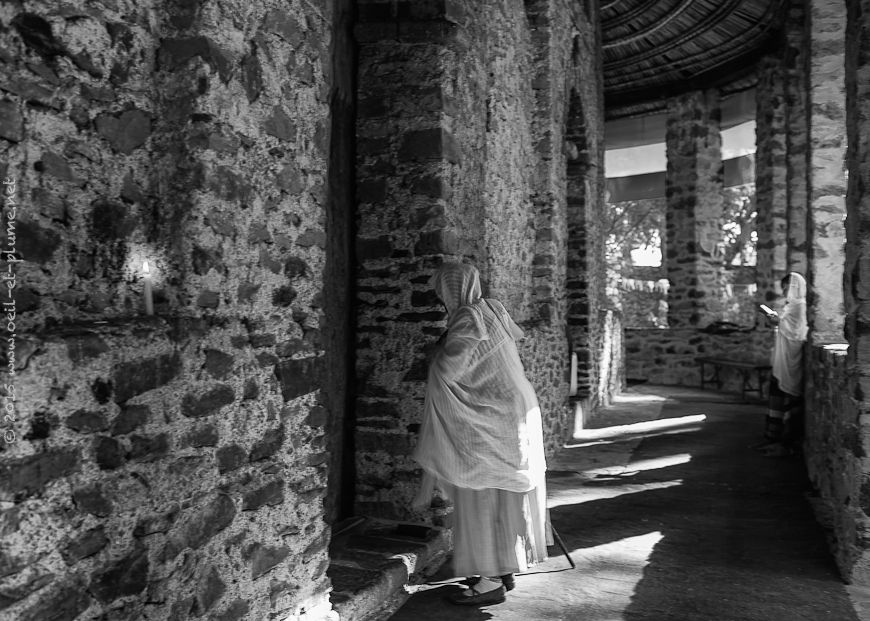 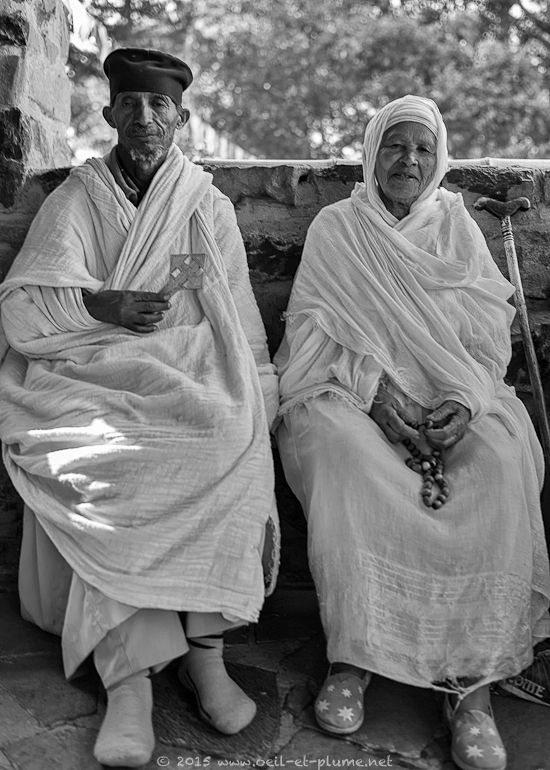 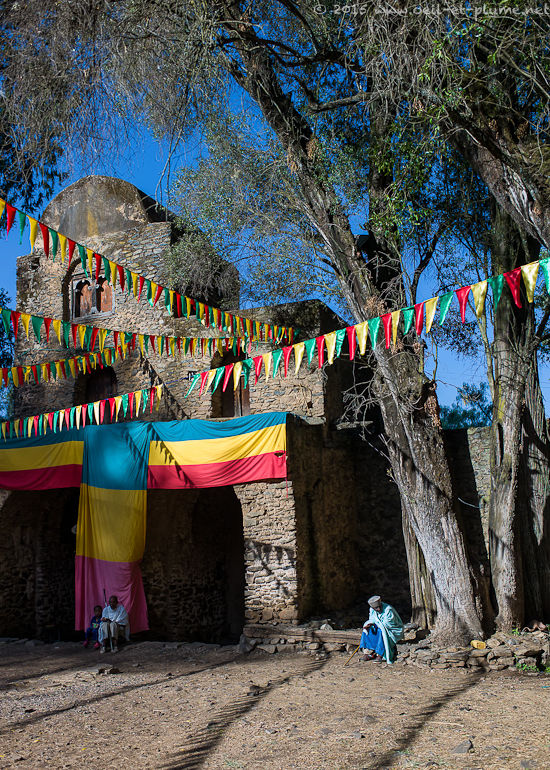 On my way out, I remember that Debre Berhan Selassie Church is spared miraculously from the destruction during the 1888 sack of Gonder by Sudanese troops who destroy all other 43 churches of the town. A blessed place indeed.

His patron was less fortunate. Not long after completing this remarkable architectural work, the emperor Iyasu falls into deep depression following the death of his favourite concubine. Neglecting imperial affairs, he is killed by his own son who declares himself Emperor, opening the door to very troubled times in Gonder.

It is time for me to head back to Gonder Piazza, where people gather for Timket festival. 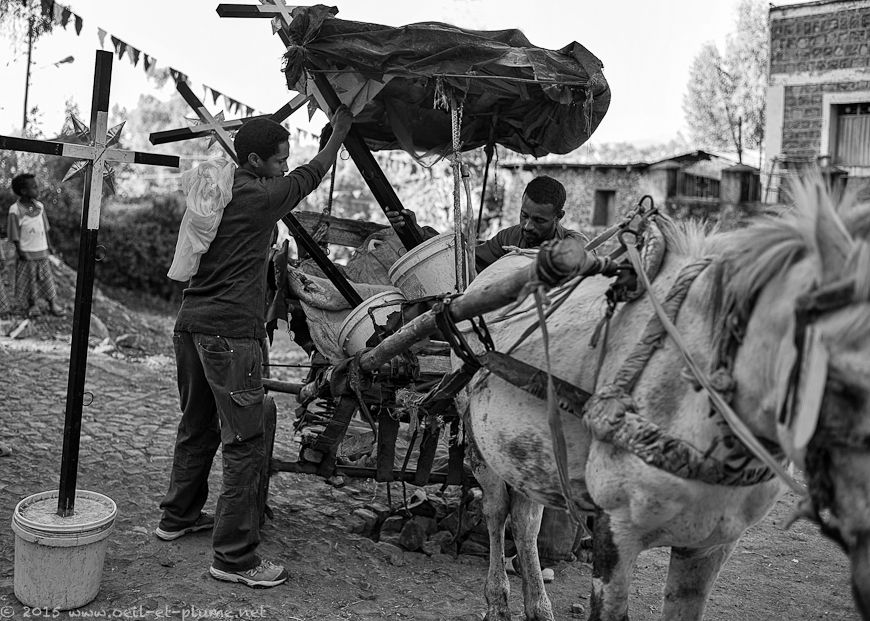 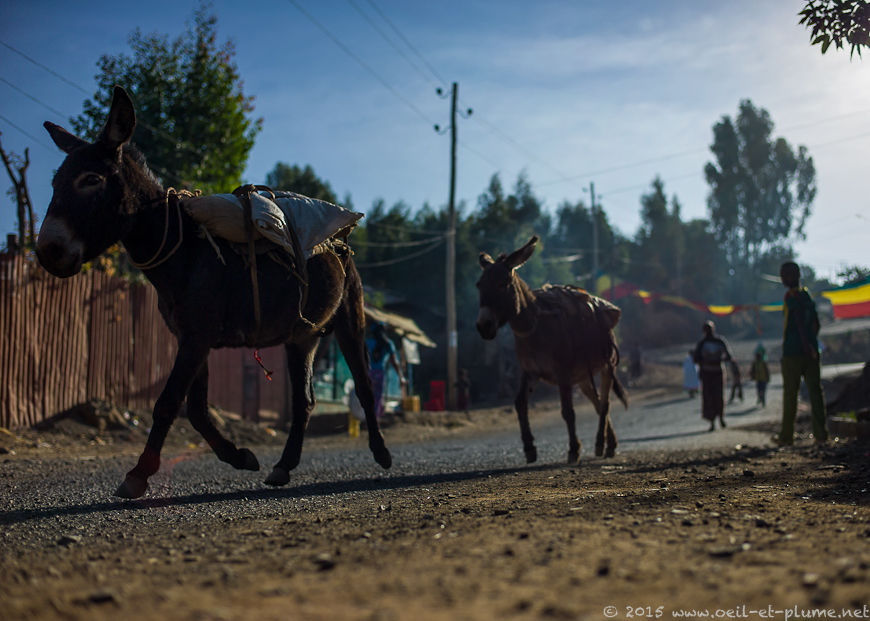