I had to visit Trabzon on my journey eastward along the Turkish coast of the Black Sea. Marco Polo passed there in 1295 on his way back to Venice after 24 years spent in Asia.

Located on the historical Silk Road and owing to its sea port, Trabzon functions as a regional trade hub between Iran and the Caucasus and more largely between Asia and the Mediterranean Sea since the Antiquity. Trabzon sea port remains key to the regional economy nowadays. 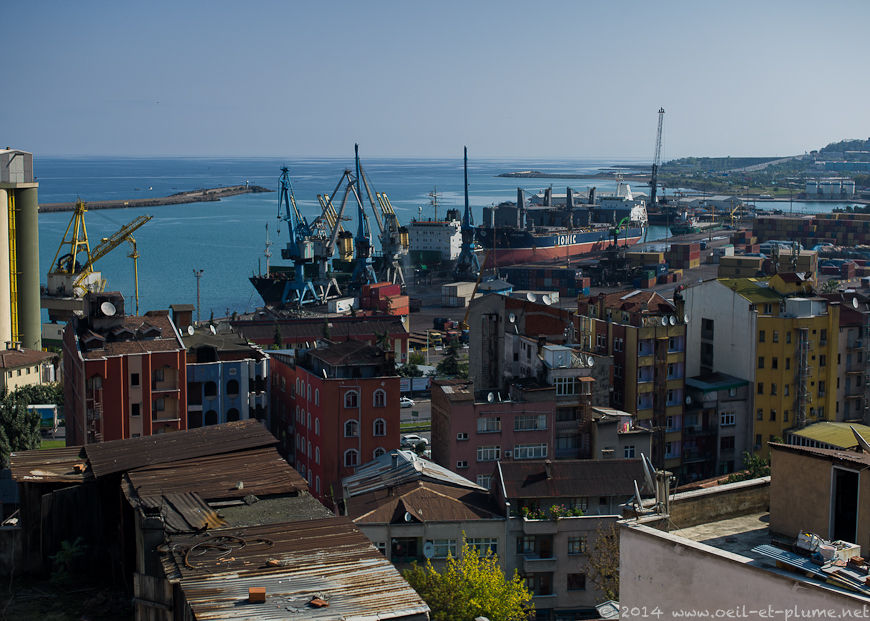 No wonder that Trabzon nurtures a solid cosmopolitan character. During the medieval era, Venetian and Genoese merchants visit or even settle in present-day Trabzon where they trade various fabrics including silk indeed. After the fall of the Byzantine Empire, Trabzon becomes the capital of the Greek Empire of Trebizon between the 13th and the mid-15th centuries until the Ottoman Turk conquest. Many Orthodox Greeks reside nonetheless in Trabzon until the beginning of 20th century. Armenians were also numerous in the coastal town until that time. The troubled early 20th century has considerably reduced, but not erased, Trabzon’s cosmopolitan character.

Trabzon’s historical quarters are perched on hills, irrigated by inextricable meandres of narrow streets. A nightmare to drive there as no city map can help valuably the visitor. I settle in a hotel in a central location near the town square and start trekking the colourful Bazaar district and other urban spots. The commercial streets are incredibly busy in the many peak hours of the day – a stark contrast to the smaller port towns,  e.g. Amasra, Sinop, Perşembe, visited earlier during my journey along the Turkish shore of the Black Sea. 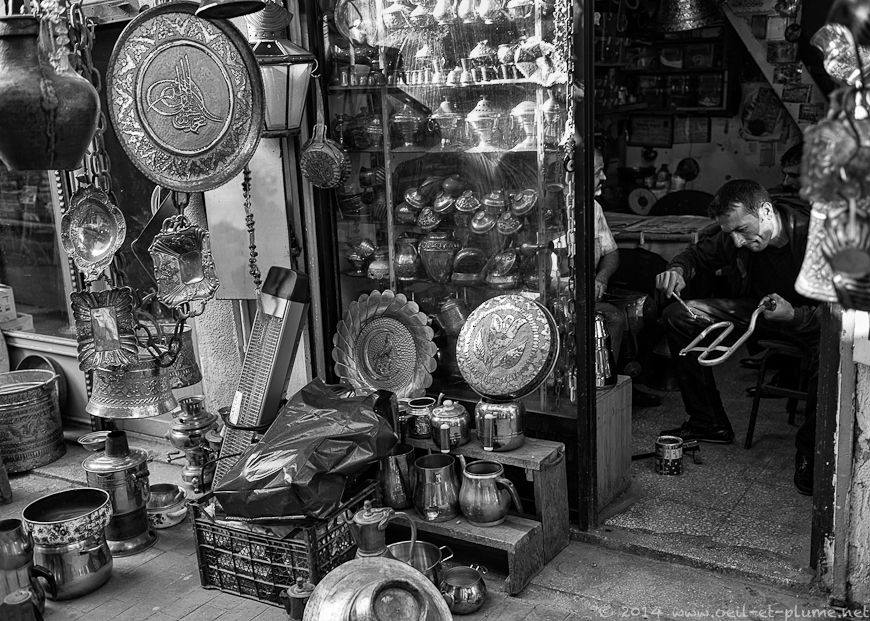 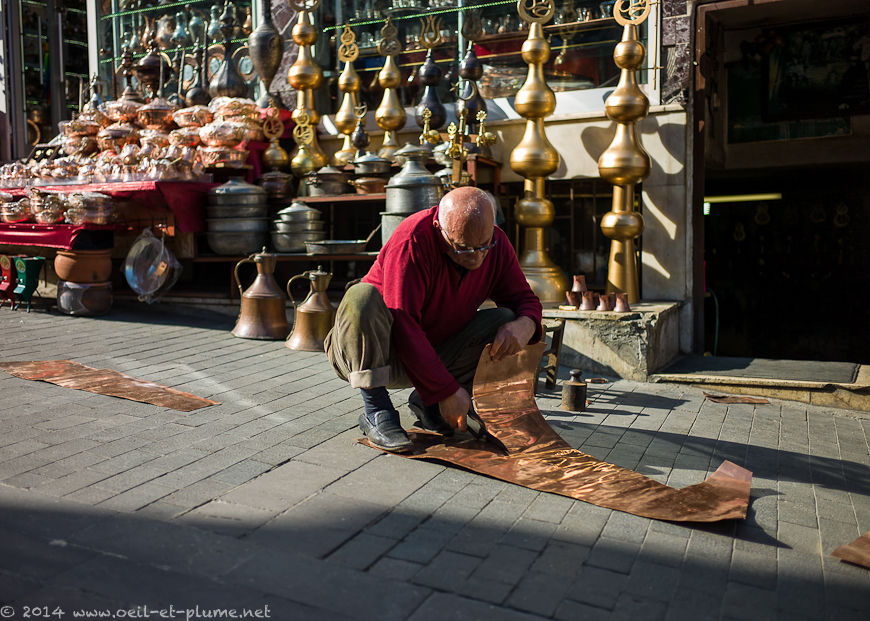 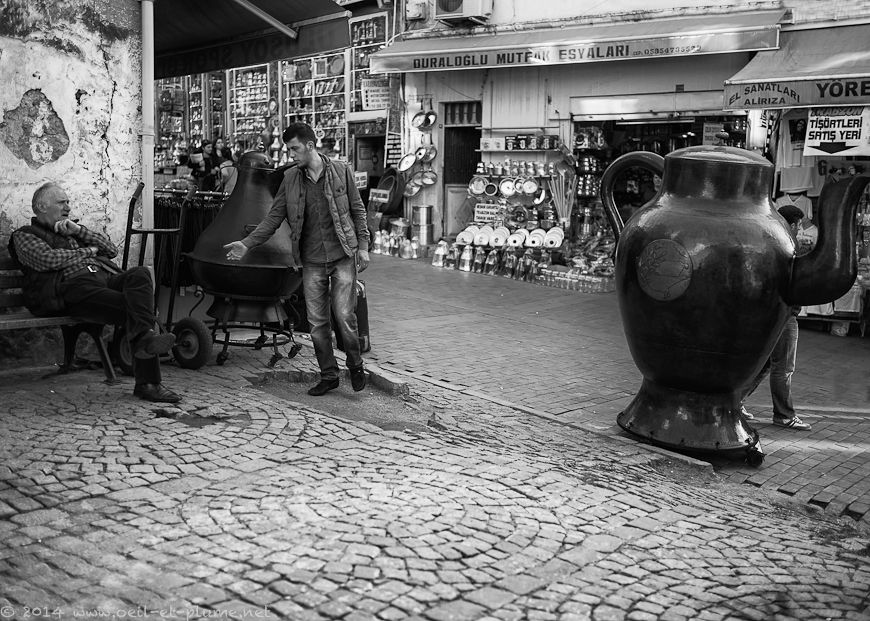 My eye is captivated by the shiny brass delicately embossed and engraved thanks to century-old techniques. Some less refined metal tools and other every-day items are no less interesting visually. I backtrack the supply chains to meet common people at work. Most of them happily pose in front of my camera. 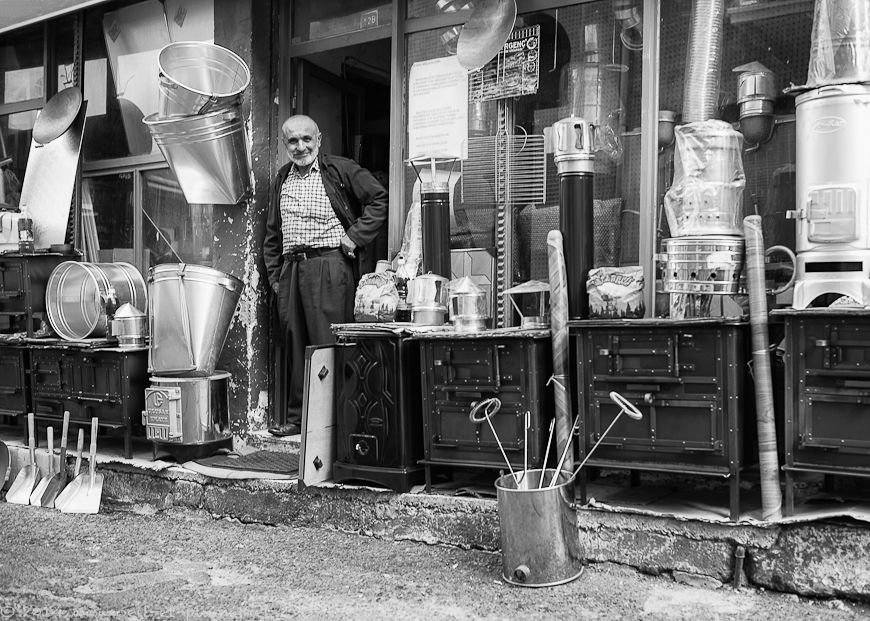 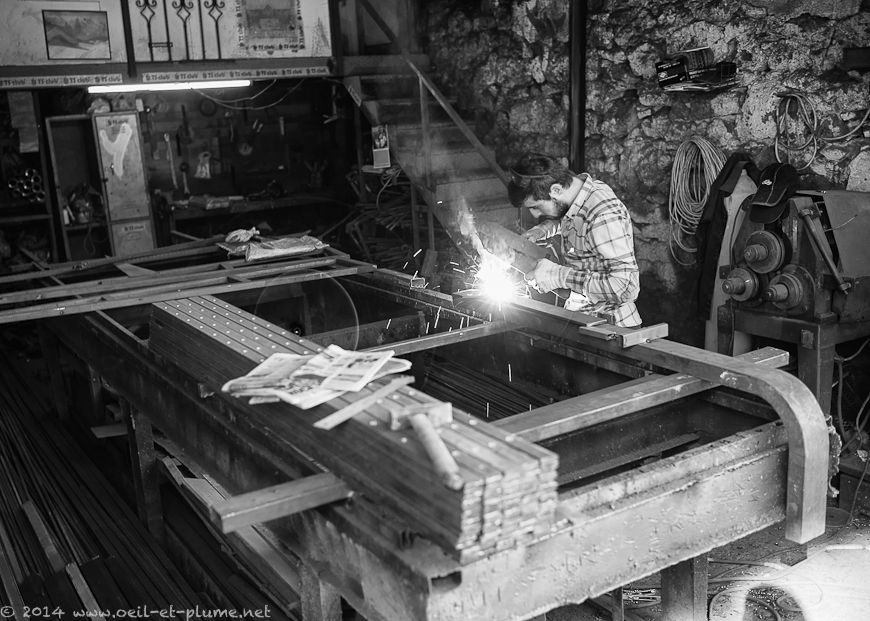 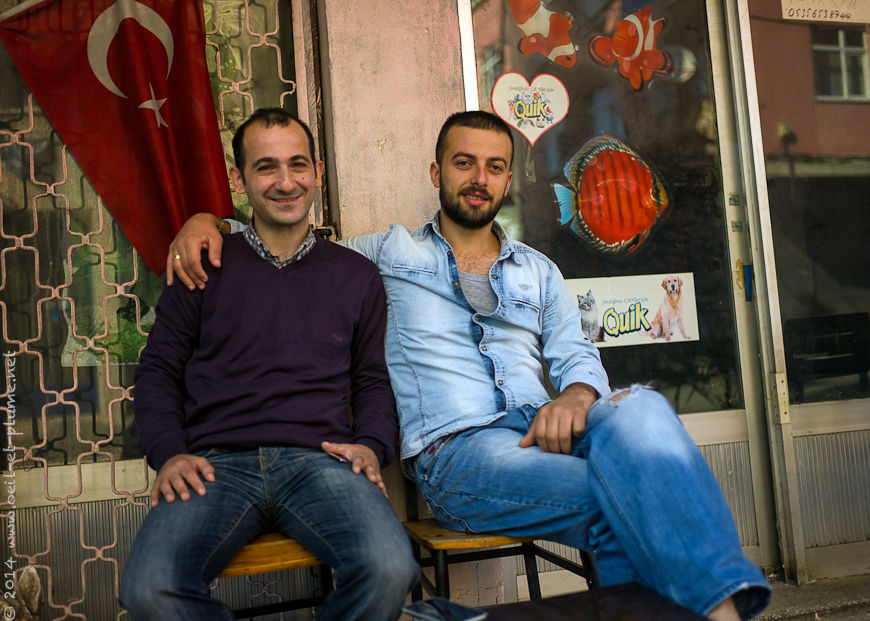 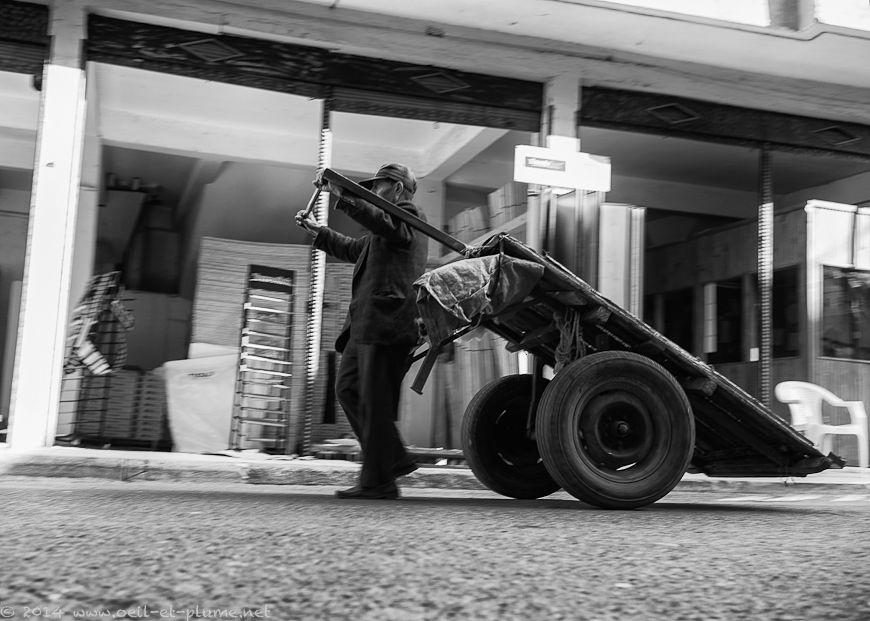 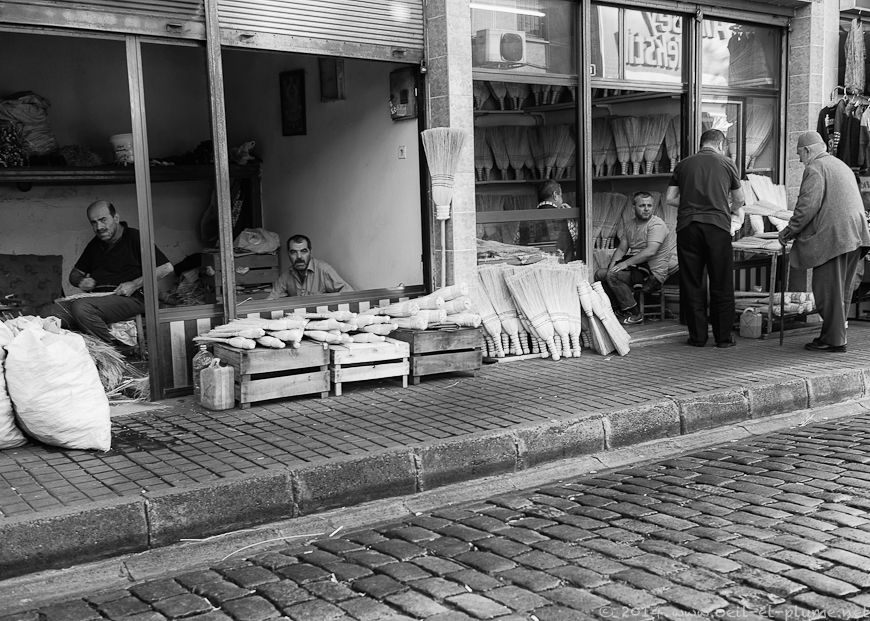 Then there is the magnificent Anatolian food. The rich variety of food combines the various cultures who shaped present-day Trabzon. Breads are gigantic as they would aim at filling alone all hungry stomachs. Cooking relies largely on the tasty and healthy olive oil that I love so much. To my utmost dispair, tea has largely supplanted Turkish coffee in public places as elsewhere in Anatolia. The infamous instant coffee sold often instead does not quench my thirst after the savourously bitter hot drink. 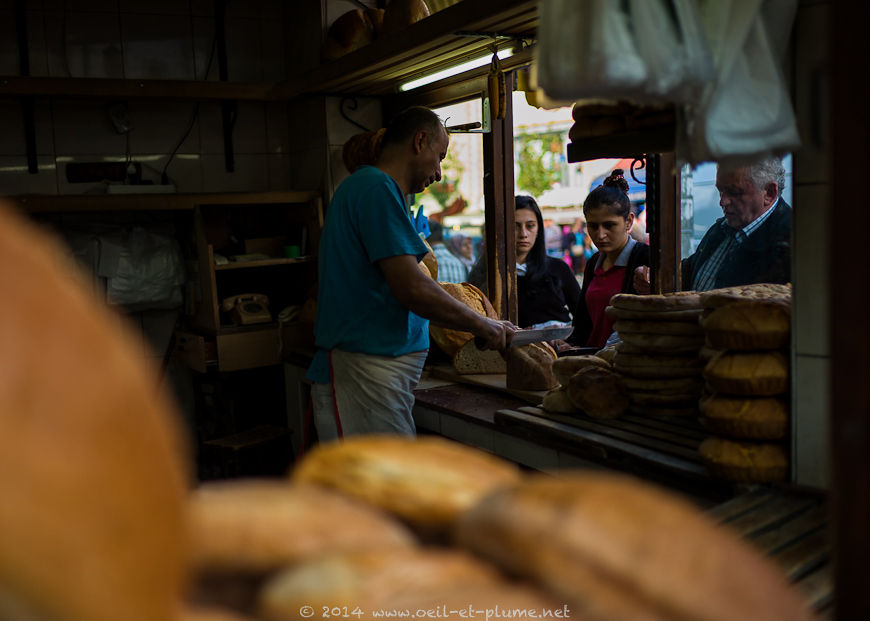 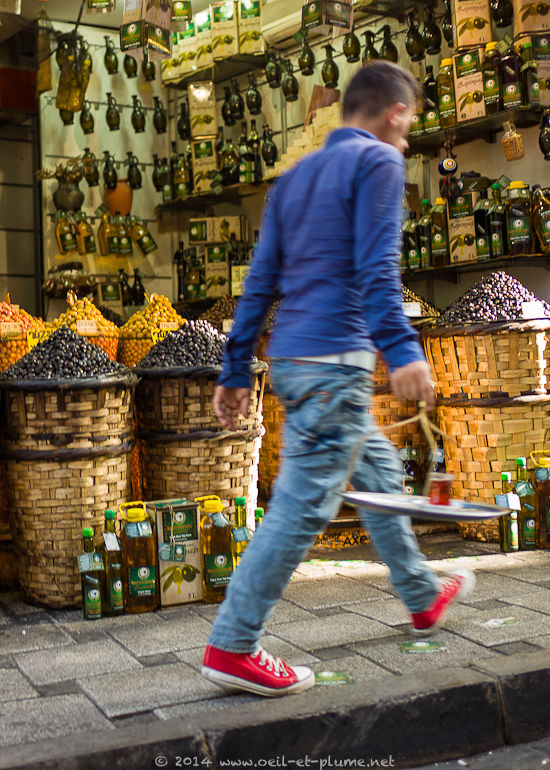 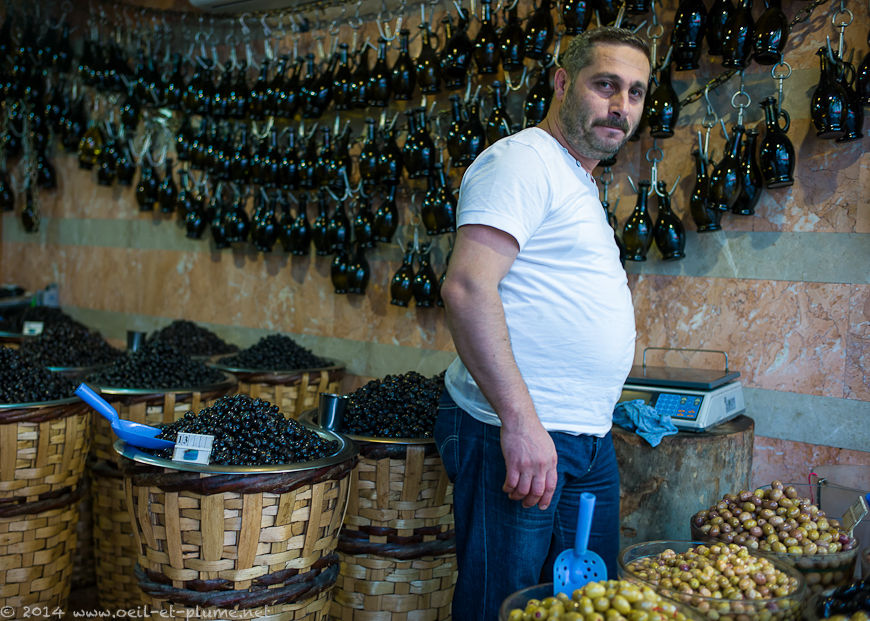 My short stay in Trabzon is about to end. I take an ultimate round in the pedestrian and commercial neighbourhoods, looking for visual expressions of the city’s rich cultural and occupational identity. 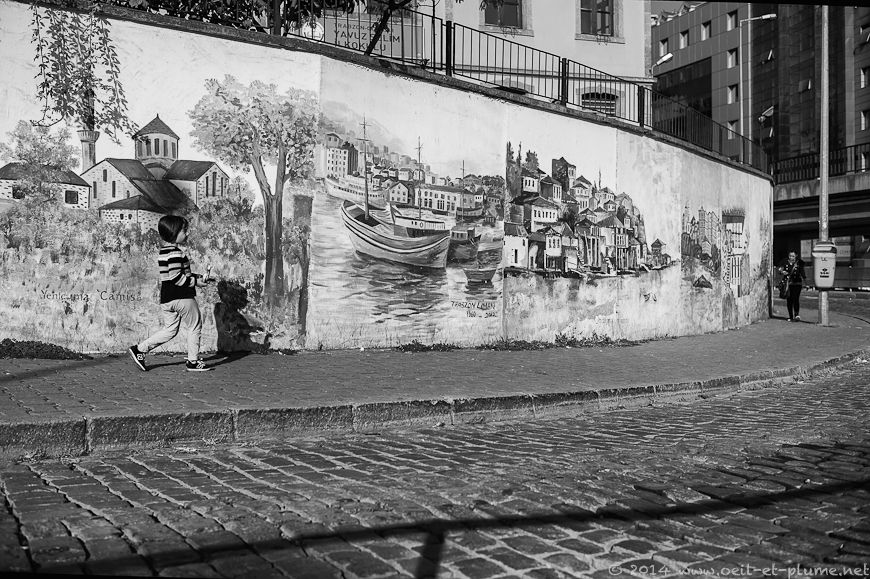 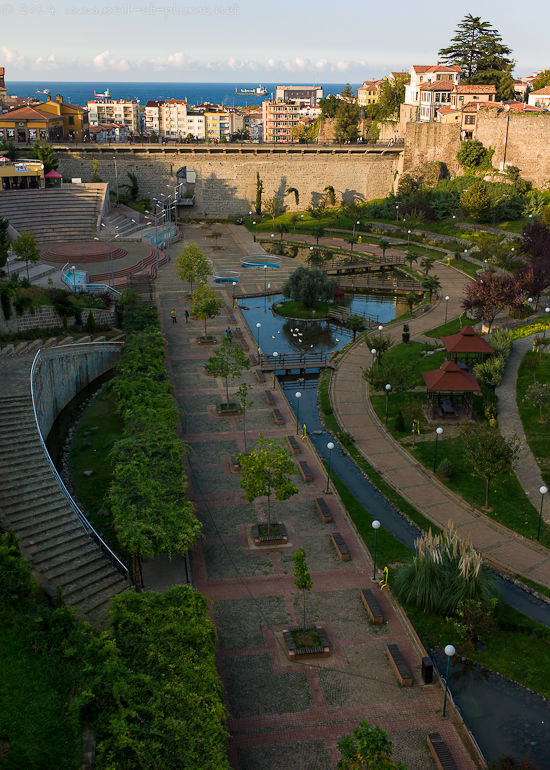 Before flying back to Istanbul, I head to the famous Greek Sumela Monastery.

The Sumela Monastery is founded in the 4th century AD by two Greek Orthodox monks during the rule of the Byzantine Emperor Theodosius I. A famous icon of the Virgin Mary said to have been painted by the Apostle Luke was brought there as epicenter of local Orthodox faith.

Clinging to a sheer rock wall above the green forests of the Altindere National Park, the monastery defies any architectural common sense. How could such a religious complex be conceived and built on such an improbable location? True, a wall cave and a mountain stream helped settling there. But what about access and living space? 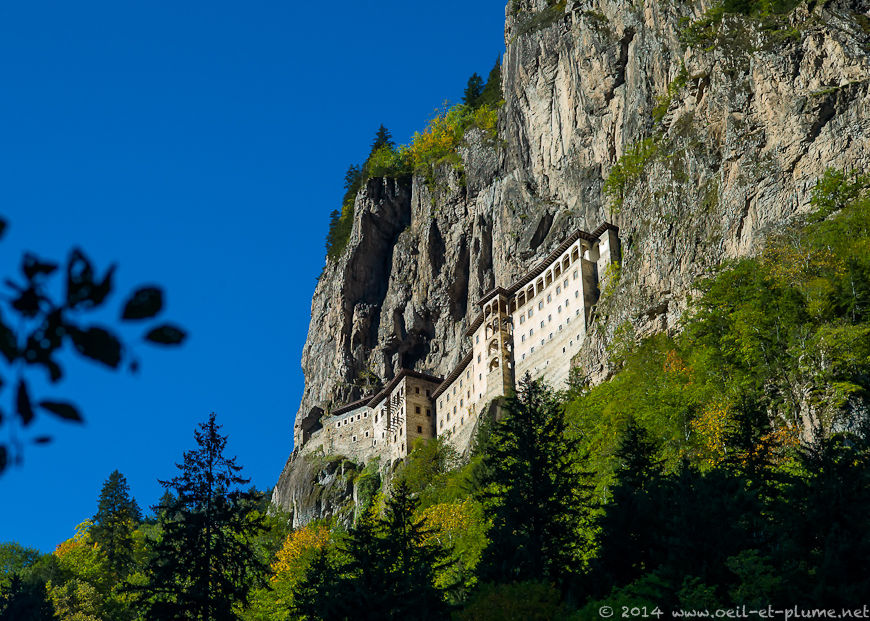 I reach the parking early in the morning. The place is virgin of any noise; the air stunningly pure and bitterly cold. The view on the monastery is breathtaking. I take no time to trek one of the paths up to the religious complex. First visitor of the day, I rush to the Rock Church to enjoy a couple of precious minutes spent in a mental communion with this special place. 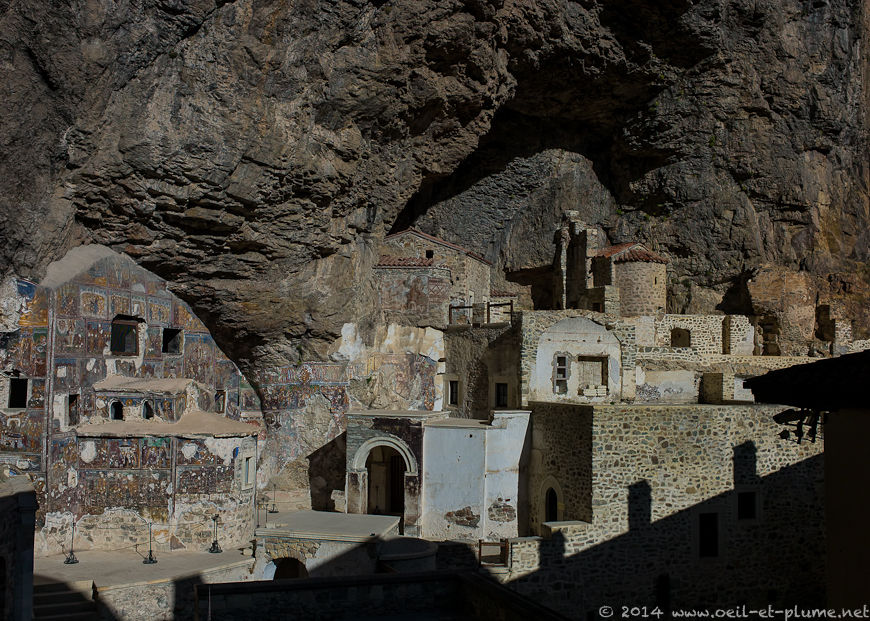 The frescoes are amazingly rich and colourful, obviously restored as much as the ravages of time allow. The local staff watch me closely, suspicious of my short but intensive photo session. Yes, I know: no flash nor tripod, but just hand-held pictures. 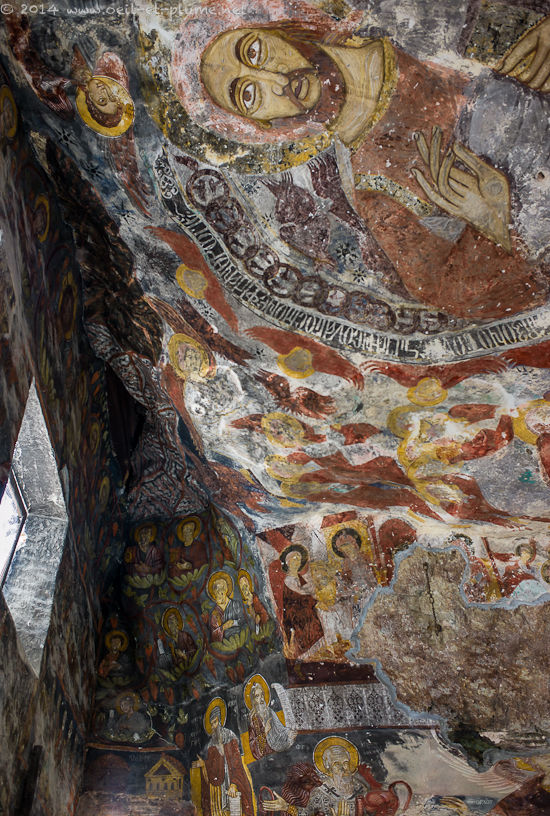 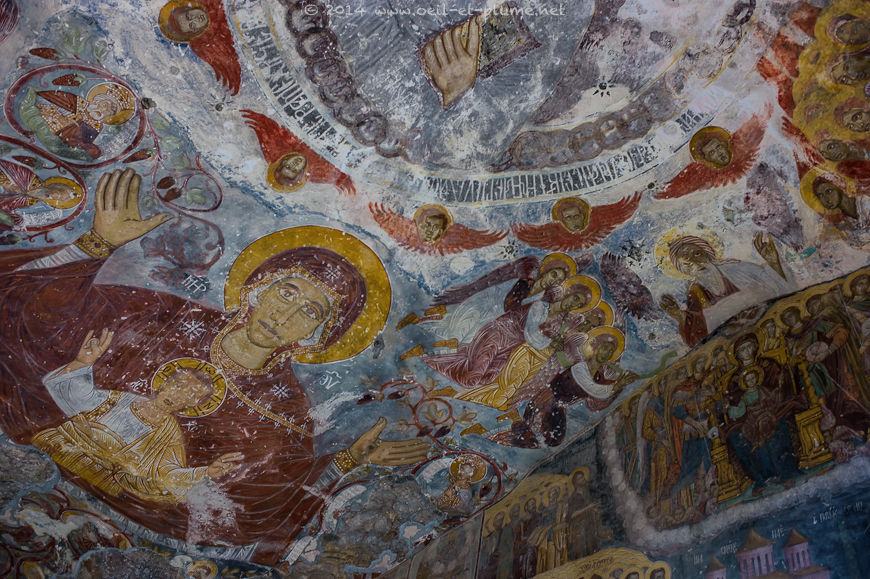 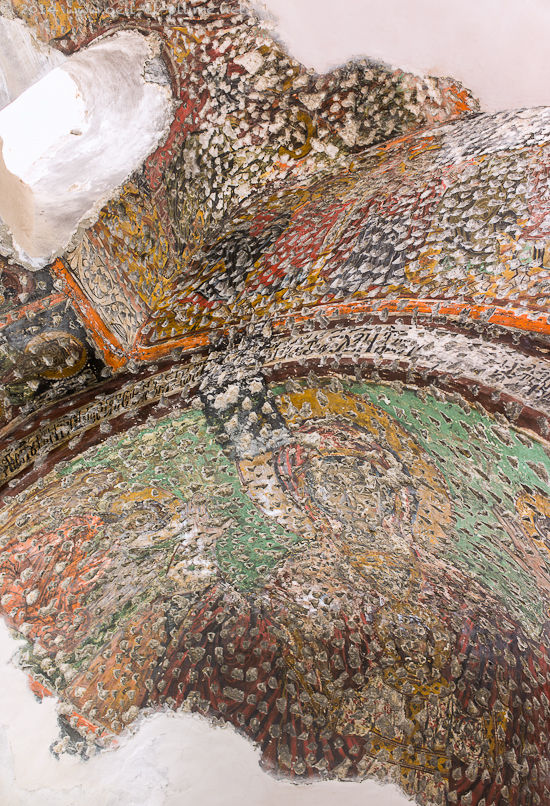 As many historical buildings, the Sumela monastery had its ups and downs, with its heday in the 14th and 15th centuries during the Trebizon Empire. Interesting enough, the monastery is granted protection and privileges by the Ottomans following their conquest of the Trebizon Empire in 1461. It special status is renewed by the successive Sultans until the 20th century.

Seized first by the Russians, Sumela Monastery is disused in 1923 following the population exchanges between the young Turkish Republic and Greece. Prior to leaving the place, the orthodox monks bury the holy icon as they are not entitled to take anything with them. In 1930, a Greek monk secretly return to Sumela, taking Sumela’s famous icon to an orthodox monastery located in Macedonia in northern Greece. 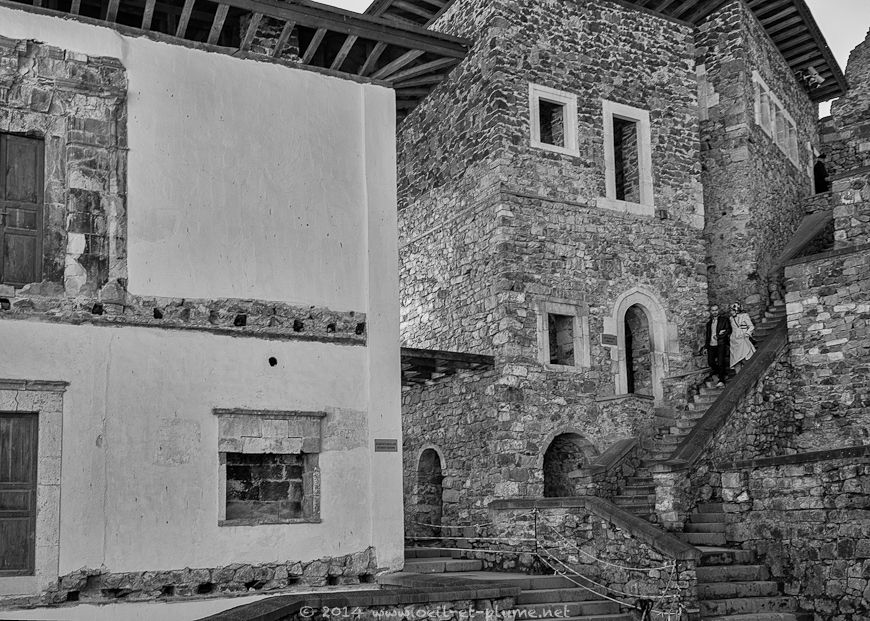 Flocks of visitors enter now the site. I end my express visit to the chapels, library and student rooms, as well as to the guesthouse and the kitchen. Done. In one room, one visitor take me apart to share his joy to visit this place: ‘I am an Orthodox Christian’, he wishpers with an irradiated smile. 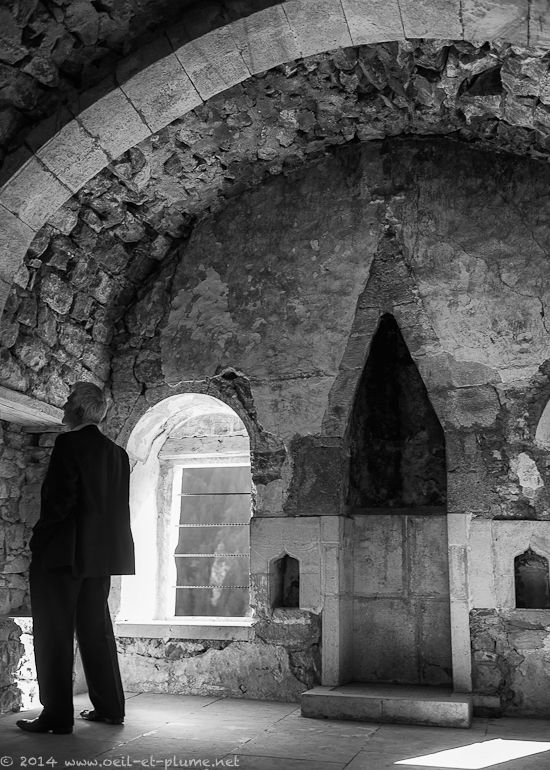 I head toward the exit of the religious complex to rest longly near a sacred spring, enjoying the special moment and the terrific scenery. I admire and nearly envy the unknown visitor’s faith. Never mind, we all are different. 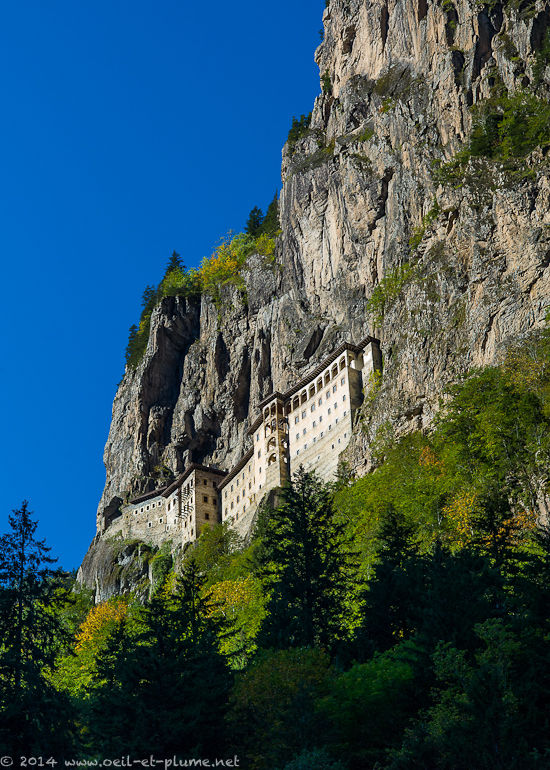 Time to head to Trabzon airport. I run down the sheer slopes as I did so many times in my native Swiss mountains. I dare a last glimpse of Sumela Monastery before setting off my rented car. Awesome place indeed.